I spent last weekend at the Annual Snowmobile Hall of Fame inductions/Ride with the Champs. It’s one of my favorite weekends of the season, and was made all the better this year thanks to plenty of snow in the Northwoods of Wisconsin, including periods of snow as we headed to St. Germain.

I drove up with Arctic Cat cross-country legend Brian Nelson. Nelson was inducted into the SHOF in 2000, and ever since he’s made the trek to St. Germain for SHOF weekend. He’s also supported the SHOF in other ways, including building a replica of his I-500-winning 1978 Arctic Cat Cross Country El Tigre for a RAFFLE PRIZE at the Upcoming Round-UP (you still have time to win this baby!).

In fact, Nelson delivered the sweet Arctic Cat raffle sled to the SHOF on this trip, where it will be on display and tempting everyone to try and win (as well as supporting the SHOF).

There are literally dozens-upon-dozens of reasons to support the SHOF, one of which is the display of historic snowmobiles and memorabilia, like this display from the Plaisted Polar Expedition.

And how about this pairing: Blair Morgan’s Ski-Doo and Tucker Hibbert’s Arctic Cat mod snocrossers!?! Lots of great battles between these two future Hall of Famers.

I love that the SHOF also honors those who have given their life while racing snowmobiles, as this trophy indicates.

One such racer was Polaris Sno Pro great, Jerry Bunke. Bunke was one of my favorite racers as a kid, in part because he had such a genuine looking smile. Here’s Bunke’s RXL racer.

The Wall of Fame at the SHOF includes the plaques of all the inductees, including the four being inducted this year: Joey Hallstrom, Toni Haikonen, Marcel Fontaine and Larry Bosacki.

While I was checking out the SHOF I ran into Don Amber, one of the most enthusiastic John Deere fans in the world.

I’m a slow learner, and it was only recently that I realized just how crazy-passionate the John Deere fans are. Seriously, it rivals the passion that Arctic Cat fans have, which is especially impressive since the Deere snowmobile division DNF’d in 1984.

Don organized a cool dinner on Friday night, where nearly all the Deere fans (and many others) gathered to share a meal and great stories. Thanks for allowing me to attend, guys!

I mention sharing stories. That’s a HUGE part of what SHOF weekend is about. Here 2011 inductee (and legendary Ski-Doo oval racer) Wayne Nicholsen (L) chats with SHOF founder Loren Anderson. Two great guys who have brought so much to the sport!

Waiting for the Friday poker run to finish, SHOF Board member Tom White (L) shares a laugh with Steve Livingston of Livingston’s Arctic Cat in Hillsboro, NH. This was Steve’s first visit to the SHOF, and based on what I saw of his passion and enjoyment, it won’t be his last.

Love this shot, in part because it captures the allure of the SHOF, and also because it shows that indeed winter does exist somewhere other than Alaska during this crummy winter.

Saturday began with an early breakfast, then saddling up for one of the several “Ride with the Champs” ride options. Team Arctic great Aaron Scheele has been coming to the Ride with the Champs for a few years and is a fixture on the Vintage Challenge (the roughly 150-mile round-trip to and from Lake Gogebic). Check out the sweet front suspension set up on Aaron’s Tiger.

Another fixture of the Vintage Challenge, Tom Rowland was there and ready to ride. Typical of Tom, he’s getting ready to ride the ULTRA RARE 1982 prototype Arctic Cat El Tigre (one of the Arctic Cats that never saw production).

I had the great pleasure of riding this machine on Saturday. Once I got over the fear of wadding it up, I enjoyed a truly exceptional ride. A strong 500cc liquid twin that sounded mean… slightly-heavy ski pressure typical of Arctic Cats of that period… VERY narrow handlebars by today’s standards… good suspension.

It made me wonder what would have happened had this and the other 1982 Arctic Cats made it to production? I know this isn’t an original question, but experiencing such an excellent machine brought a new perspective for me.

Dimmerman’s Thunderstruck sled is a machine that I wish everyone could ride. During the 15 miles I logged on this baby, hammering the throttle at every occasion to hear and feel the 900cc triple howl its meaty roar, I found myself laughing out loud and wondering if the 2-stroke triple will ever make a comeback in the snowmobile world.

Many, many Arctic Cat El Tigres participate in the Vintage Challenge. The goal of getting to (and back from) Lake Gogebic is a worthy one.

Unfortunately for me, this was my view of the ride for the last 25 miles before arriving at Fish Tales on Gogebic.

A broken steering post on my 1979 Cross-Country El Tigre brought great shame to the Team Arctic crew, and lots of laughter from the Enduro Team Deere riders.

I vow to return next year and repair the considerable damage I’ve caused the Arctic Cat legend!

BTW, thanks for the tow Paul!

Leaving Fish Tales for the ride back to St. Germain, some of the group contemplates the blast across Gogebic. There were just a couple moments during the ride where throttles were pressed hard to the handlebar. Yep, just a couple. 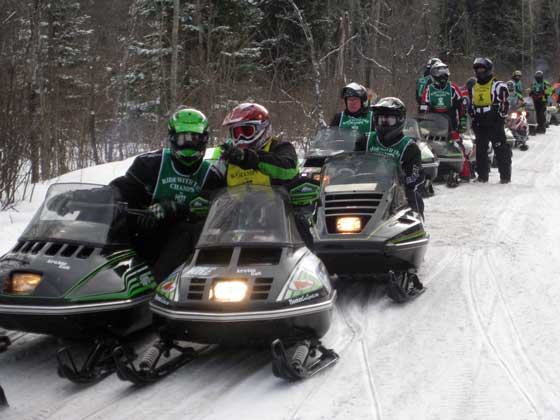 There are several occasions during the ride where we stop and chat and joke about whomever is suffering some mechanical breakdown.

Speaking of which, Adam Stafford had lots of practice replacing B8ES plugs on this 1977 El Tigre. Sadly, Adam made it to within three miles of the finish before running out of gas (and time), and had to suffer the indignity of being towed in by his brother Nick.

After the Ride with the Champs, it’s time for the Hall of Fame inductions, which begins with happy hour and an autograph session with famous sledders. Here 2012 inductee Marcel Fontaine (L), 1996 inductee Doug Hayes (red shirt) and 1988 inductee Stan Hayes (yellow) share a laugh with an autograph seeker.

If you’ve ever wanted to meet, hang out with and talk to some of the great snowmobile racers from over the decades, SHOF weekend is the time/place to do it.

Case in point: Arctic Cat’s Ole Tweet (right, 2004 inductee), Roger Skime (middle, 1998 inductee) and Jeff Tweet laugh at my suggestion that the broken steering post on my 1979 El Tigre be covered under warranty.

One of many enjoyable conversations I heard during dinner was between Dimmerman (L), Scheele (folded arms), Arctic Cat engineer Greg Spaulding and Jimmy Dimmerman.

Listening to the elder Dimmerman talk with Spaulding about building Sno Pro race engines back in the 1970s, as well as the relative strengths and weaknesses between the various brands, was as fascinating as it was informative.

One choice nugget: In the factory Sno Pro wars of the mid-to-late-1970s, these two agreed that Ski-Doo had the most horsepower, Polaris had the clutching, and Cat had the handling.

Haikonen was the first snocrosser to be inducted into the SHOF, opening the door for another generation of racers much the same way that he ushered in the era of high-flying double-jumping with his historic performance at the 1995 Canterbury snocross.

These days Haikonen lives in his native Finland and works in IT. He still loves snowmobiles.

It was great to see you again, Toni. You were an awesome competitor and a joy to know.

I was especially happy for my friend Joey Hallstrom to get inducted this year. Shown here with his wife Tracy, daughter Gabby and son Jesse, Joey was of course quite happy all evening. His speech was gracious and enjoyable, as he acknowledged the people who made his career as Team Arctic Race Manager possible; thanked the many racers (both Cat and competitors) and race organizers; tipped his hat to those who have passed away, and expressed his utter appreciation for being involved in the great sport of snowmobiling.

Nice job on your speech, and especially your career Joey!

By the way, are you sponsored by Bud Light, or was Tracy really thirsty?

Congratulations to all of you!