Boss Cat I, II and III are among the three most iconic snowmobiles in Arctic Cat history. Thanks to the considerable effort (and expense) of the Warning family, all three will be together at the Arctic Cat 50th Anniversary.

According to the Warning family and VintageSleds.com, the 50th Anniversary Celebration will be the last time in the forseable future that all three sleds will be shown together. The Warnings plan to place Boss Cat III on display at the Snowmobile Hall of Fame in St. Germain, Wis.

Also for the record, the Boss Cat I on the right isn’t actually Boss Cat I. It’s a stunning reproduction, the result of untold hours of research and recreation.

The original Boss Cat I was destroyed during a speed run in Boonville, NY, in 1972, with Team Arctic’s Dale Cormican in the cockpit. Cormican escaped, but the turbine-powered, 1000-hp machine that ran 126 mph wasn’t so fortunate. A mock-up the the Boss Cat I was recreated and put on display at the Arctic Cat offices/museum, but it was destroyed when a fire ripped through the building in 1973.

I for one and hoping the hex is broken, and that the Warning’s recreation remains free from disaster.

Here’s another shot of Boss Cat I during a test run at Arctic Cat in Thief River Falls.

On the left is Dale Cormican, one of the racers who piloted the Boss Cat. On the right is Dennis Ray, the genius who designed all three Boss Cats.

Both Boss Cat II and III are the originals, and restored to their condition during the first speed run heyday in the early 1970s.

Arctic Cat’s Kale Wainer observes that the Boss Cats are so iconic and outrageous in style, that they’re like looking at the Egyption pyramids. You stand in awe and wonder, not fully able to comprehend their full beauty and presence. I think he’s spot-on with the observation.

(To see the complete history of these machines, go to BossCatLegacy.com and prepare to lose yourself for a few hours.)

The Boss Cats represented a golden era for snowmobiling and Arctic Cat, when the company spared no expense to prove it would compete in all forms of competition. To see the three machines at Arctic Cat during the 50th Celebration will be a historic moment whose imprint will be remembered for decades to come. 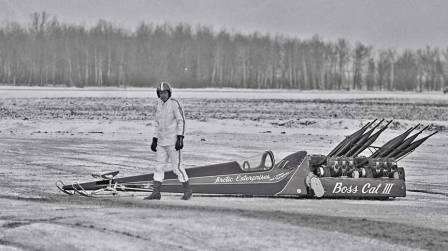