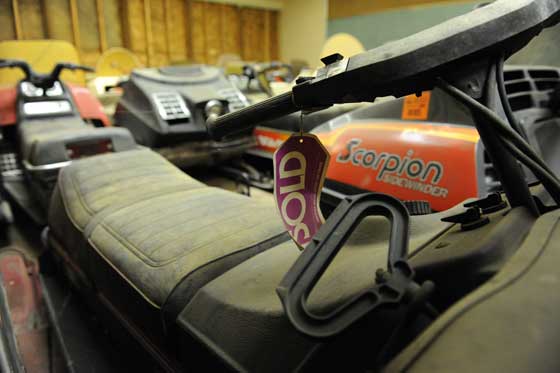 For a four year period beginning in 1982, Certified Parts Corporation of Janesville, Wis., and its owner, Jim Grafft, were an integral, brand-saving chapter in the Arctic Cat story. In fact, after five decades of Arctic Cat, only two individuals have ever owned a controlling interest in the entire company at one time: Edgar Hetteen when he founded the brand, and Jim Grafft (via CPC) when he purchased key elements of what was left of it when Arctic Enterprises went financially insolvent beginning in 1981.

For the uninitiated, here’s an abridged history lesson: When Arctic Cat liquidated its business operations in the spring of 1982, it was CPC who bought the parts, tooling, licenses, the “Arctic Cat” name, the Scorpion line of parts and other pieces of the company. From that point forward, it was CPC that sold new Arctic Cat parts to dealers.

Over the next year, the beginnings of the brand’s rebirth as a snowmobile manufacturer would unfold, starting with its first production of snowmobiles for the 1984 season after two years of having “Gone Fish’n.”

It’s been said that after the agreement, when it came time to retrieve the parts supply held at CPC in Janesville, that more than 100 truckloads were needed to move everything back to Thief River Falls. Every brake disc, decal and tie-rod. Every seat, hood and shock.

For many in the Arctic Cat family of employees, dealers and such, this return of all Arctic Cat snowmobile parts and licenses from a so-called “outside” owner represented the truly complete return as a snowmobile company. The company was whole once again.

I know that when I’ve read the book LEGEND: Arctic Cat’s First Four Decades, I silently cheered when the story highlights these milestones. But I also realize now that while CPC might have been an “outsider” of sorts, that it was also a definite savior to the Arctic Cat brand.

When companies go bankrupt and liquidate their assets, sometimes other companies or individuals acquire them. Often times, the new owner disolves the various elements of the company in a financial whirlwind, literally shredding to pieces that which was once whole.

CPC could have scattered the various elements it purchased to wind. It could have refused to help launch Arctco. It could have retained the “Arctic Cat” name indefinitely, which would have undoubtedly produced all kinds of problems down the road.

But it didn’t. It kept the key pieces of the snowmobile business together and helped rebuild the brand strong enough that it could eventually buy itself back into business.

In hindsight, this company of less than 100 people and owned by sharp businessman who was only in his 30s at the time were critically important to the success of Arctic Cat’s return to the snowmobile business. Jim Grafft himself says that he was quite instrumental in the rebuilding of the company in order to produce new snowmobiles, more so than the history books have indicated. I don’t doubt him.

Yet while the details of exactly who was responsible for what role in the rebuilding of Arctic Cat have been clouded by everything from pride to Father Time, there is little disagreement that, after Arctco repurchased all of the Arctic Cat snowmobile assets and licensing from Grafft, that CPC retreated from its large role in the snowmobile industry. The large ads in magazines ended. The amazingly-cool CPC calendar, loaded with vivid color race photography, stopped. 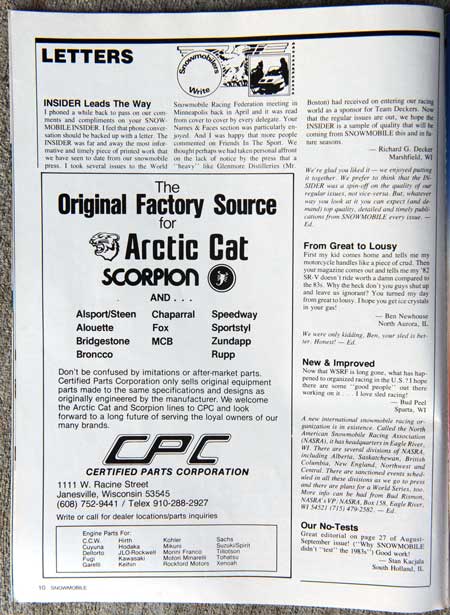 An ad in Oct. 1982 edition of Snowmobile Magazine. 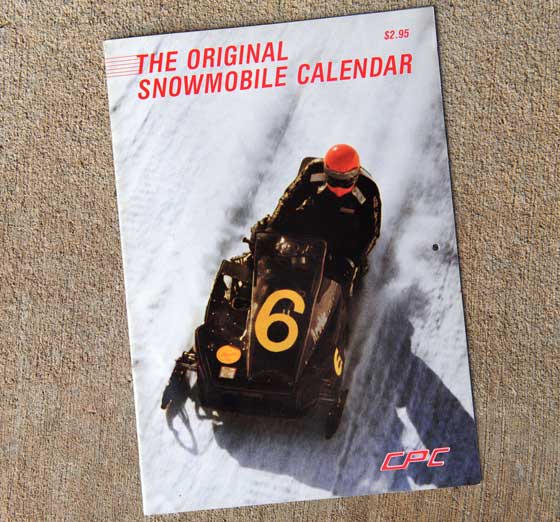 Loaded with wonderful, full-page racing images, the CPC calendar was a must-have for snowmobile enthusiast.

While Arctic Cat grew in leaps and bounds, entering new markets while strengthening its position in the snowmobile industry, CPC seemed (in my mind at least) to gently fade away, rarely to be seen or heard of.

But for collectors and history buffs, CPC remained something of an enigma, even a source of speculation.

First of all, CPC still retained and sold service parts for such vaunted brands as Rupp, Chaparral, Speedway, Brutanza and even Scorpion. It was (and still is) business as usual. And there were still floor-to-ceiling racks of new parts for these brands and others.

Such was the gossip with CPC and its snowmobile holdings. There were rumors of prototype Scorpions from the last days of Arctic Enterprises still lurking on pallet racks within the CPC warehouses.

And even for Arctic Cat collectors, wishful whispers of small parts caches of El Tigres, EXTs and Zs fueled many conversations on telephones, at swap meets and various vintage shows. After all, even after more than 100 truckloads of parts that went back to TRF, surely some parts must have remained? Maybe a prototype engine or Sno Pro hood? Something?

It was with this hopeful anticipation that Snowmobile Hall of Fame board member and Arctic Cat/Scorpion fan Tom White actually contacted Jim Grafft a handful of months ago.

White asked Grafft if he could stop by and chat with him, which Graft obliged. A date was set and White arrived, unsure of what he’d see.

Four hours, multiple stops at various CPC warehouses and many oh-my-gosh moments later, White left Grafft and Janesville like a kid on Christmas morning when he first sees the spread of presents under the tree.

Grafft indeed retained some snowmobile treasures, and though he’s adamant that these artifacts are NOT for sale, he does want to share them with snowmobilers who appreciate such history.

Having sat, mostly untouched, for the past 30 years, some of these artifacts were long since forgotten. Grafft himself had little reason to do anything with them except to store them in the recesses of various buildings he owns in Janesville.

Fortunately, Grafft agreed with White’s request that Arctic Cat historian/collector/dealer Tom Rowland of Thomas Sno Sports have the chance to come and see the CPC compound, to see some of the treasures that have been unintentionally hidden for three decades.

Being the kind gentleman that he is, Rowland asked if was okay that he be joined on this expedition (or excavation, as it sometimes seemed) by his nephew, Eric Bergstrom, as well as some journalist hack whom happened to produce an Arctic Cat-focused Website. Grafft granted the request, and last week the three of us embarked on a journey to Janesville, where we would meet with Grafft, see the CPC operation as it exists today, and uncover the remnants of what remained of its four years with Arctic Cat. 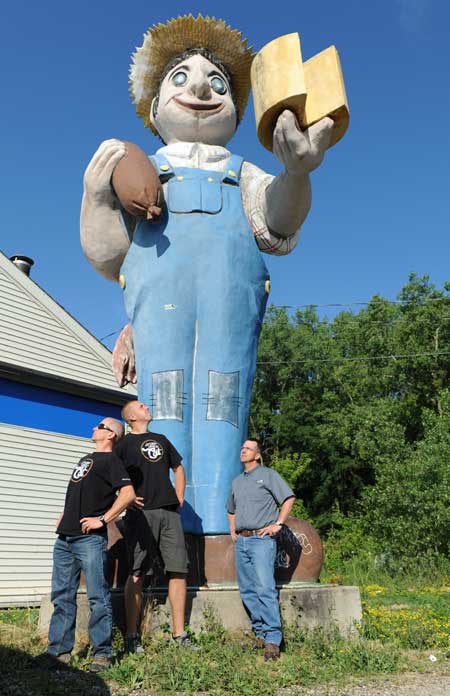 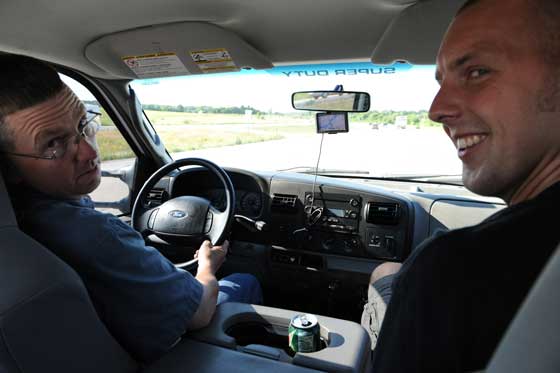 As far as road trips go, the one to CPC with Tom Rowland (left) and Eric Bergstrom (though he looks strangely evil here, he’s actually one of the nicest guys in the world) was an all-timer for me.

We didn’t know what to expect, but we were hopeful to see some things that would capture our vintage imaginations. I’m glad to say, we weren’t disappointed. Not by a long shot.