Having given a very short history CPC and how I ended up there, please CLICK HERE for Episode 1 of CPC Revisited. 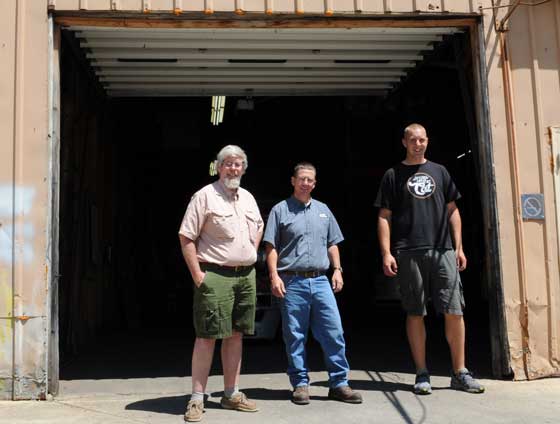 Our day in Janesville to see the CPC operation began at the warehouse that served as repository for much of the inventory of Arctic Cat service parts in the 1982-1986 timeframe that CPC owned that business.

For Tom Rowland (middle), Eric Bergstrom (right) and myself, getting to meet Jim Grafft (left) was an honor. None of us knew exactly what to expect, including Jim.

All that Tom, Eric and I knew was that Jim was going to show us some of the CPC properties that housed their operations, plus a storage facility that contained some old sleds. 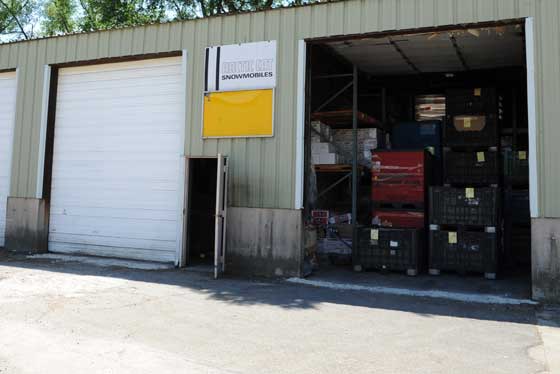 It’s a good sign (pun intended) when one of the first things to catch your eye is a VERY rare Arctic Cat sign, hanging outside the door of the warehouse. 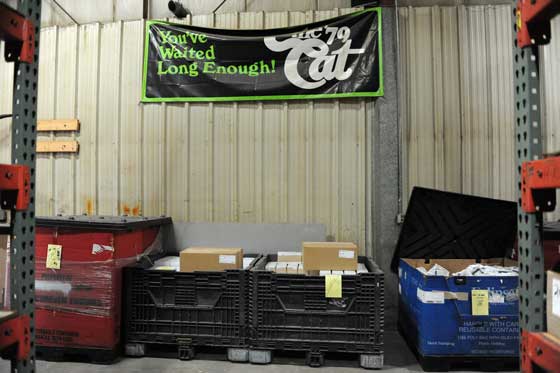 Inside, there were other Arctic Cat signs and posters to capture our attention. Indeed, after years of speculation about what treasures sit inside of CPC, coupled with the five hour drive to get to Janesville, we felt like we’d “Waited Long Enough.” Our eyes were searching for anything Arctic Cat related. 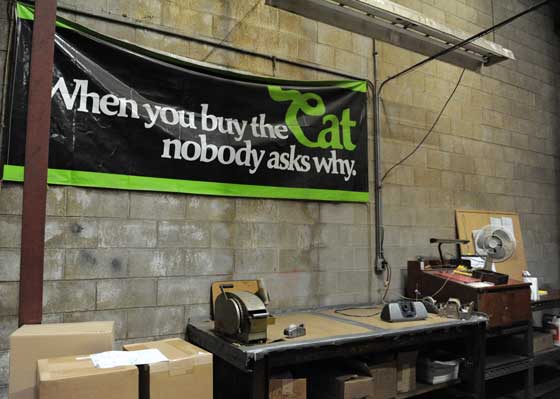 I thought this poster, located in an area where they pack boxes for shipping, was funny for the double-meaning. I wondered how many times Jim was literally asked, “Why did you buy Arctic Cat?”

When I asked him the question in a round-about-sort-of-way, his answer was that he saw opportunity. I imagine it was the same opportunity he saw when he bought nearly a dozen other discontinued brands. 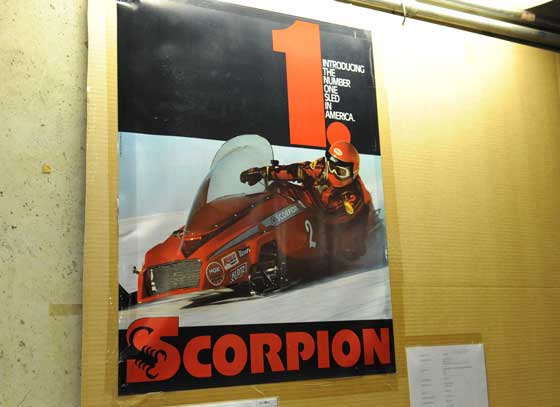 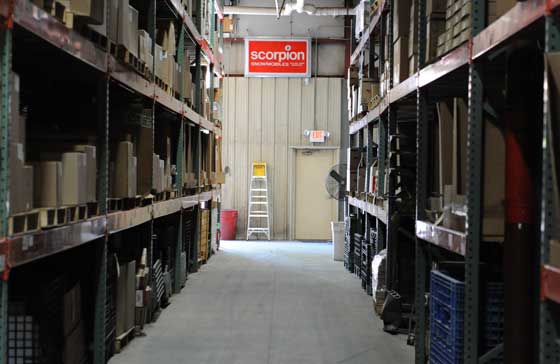 Gazing down an aisle of snowmobile parts and seeing a Scorpion sign at the far end is enough to confuse any vintage fan. Yes, confuse. Because part of you wants to just stop and sort of take it all in, while another part wants to start digging into the bins. 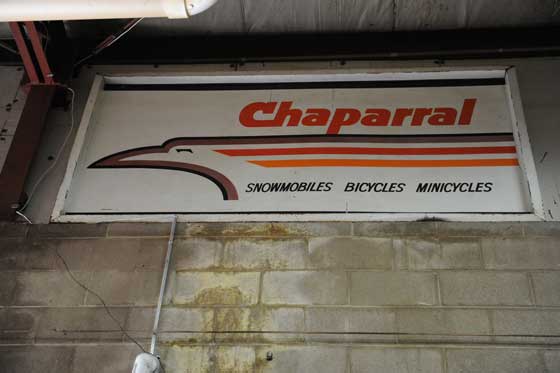 Chaparral is one of the companies that Grafft/CPC purchased. For those who might not have known, CPC has a HUGE supply of NOS Chappy parts. 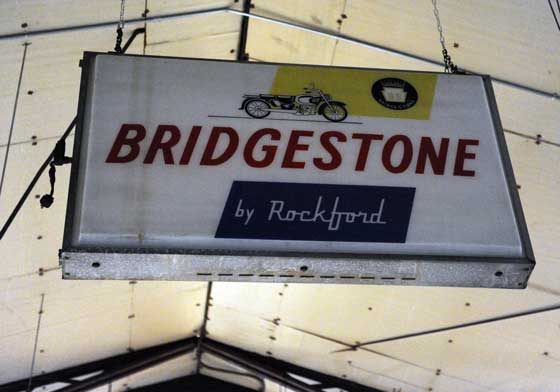 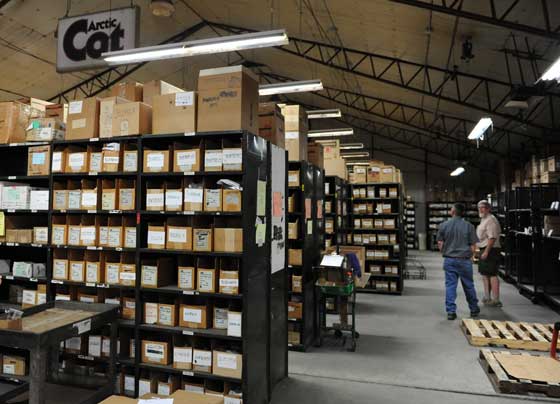 While I knew going in that the gargantuan supply of Arctic Cat parts that CPC owned were long ago bought (and brought) back to Arctic Cat, there are moments when, looking at pallet racks stocked from floor-to-ceiling, with an Arctic Cat sign hanging above them, I secretly hoped to find a stashed 4-cylinder Kawasaki engine out of a King Kat, still wrapped in plastic and waiting for a home. 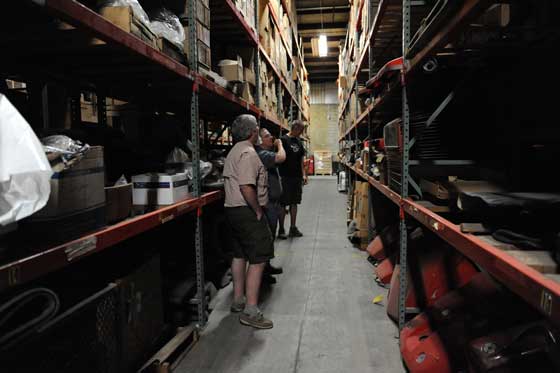 Grafft graciously escorted us through each aisle, answer an endless barrage of questions as well as remarking about parts that he saw along the way. 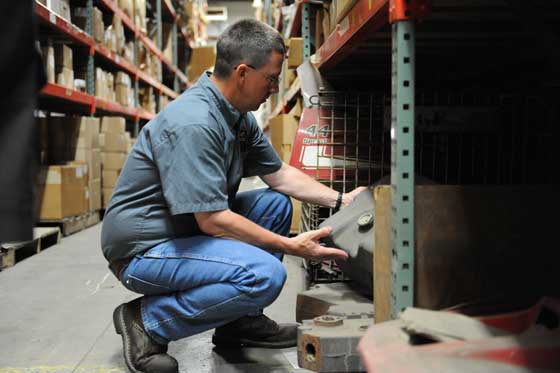 For me personally, I had as much fun watching Rowland and Bergstrom discover items as I did seeing the stuff for myself. As a serious collector and Arctic Cat historian, Rowland has a keen eye not just for the black-and-green stuff, but even for some of the “other” brands.

There are still enough parts at CPC for non-Cat brands that it seems as if you could build a decent fleet of complete machines. 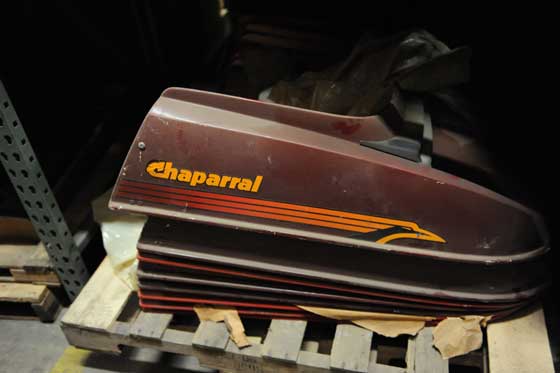 I wonder how many Chappy parts CPC sold prior to last year’s Waconia Vintage Ride-In, given that Chaparral was the featured brand?

Or better yet, how many items might CPC have sold had the company brought a fully-stocked truck to Waconia!? 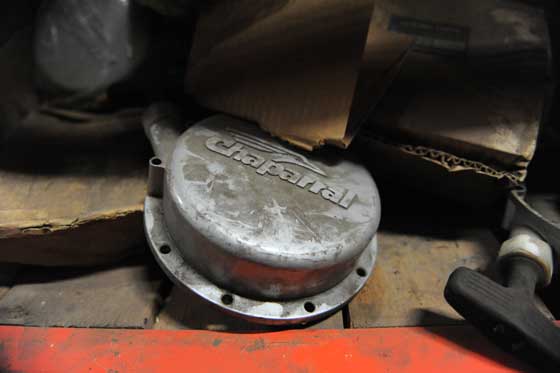 With many bottom-shelf items wearing a thin layer of dust, the scene felt a little bit like American Pickers, when they uncover a seldom-seen stockpile of amazing stuff. 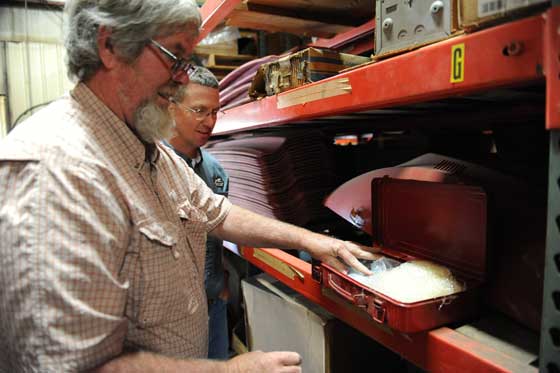 For instance, we were walking by some shelving when a red steel box caught Grafft’s eye. He stopped and said, “Oh, here’s a brand-new Chaparral tool kit.”

Literally an NOS kit with the tools still wrapped in plastic!

I’m not a Chaparral guy, but I know that if I found a similar-condition Arctic Cat kit, I’d be jumping like a high school cheerleader who slammed four cans of Red Bull.

This stuff is for sale, folks! 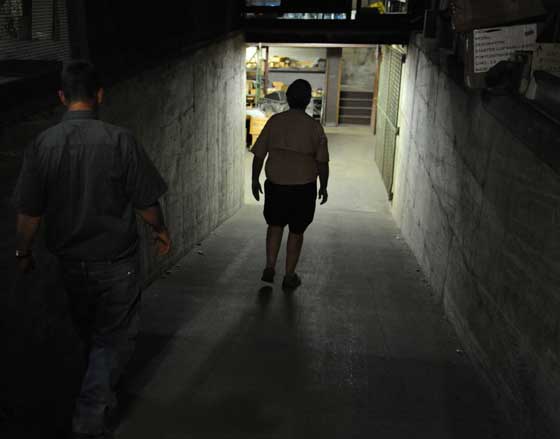 After we surveyed the ground level of the warehouse, Grafft invited us down to the basement, where there might be a few more items to see… 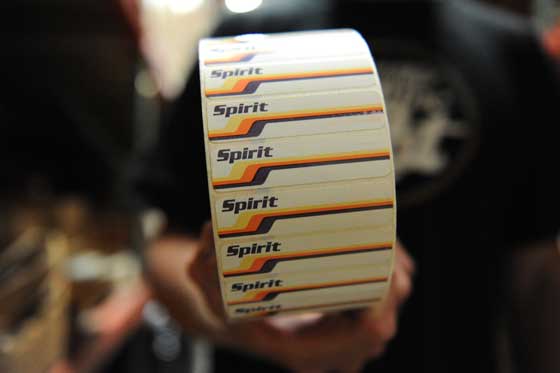 Indeed, one of the first things we saw was a roll of Spirit outboard decals. CPC still sells service parts for Spirit (aka rebadged Suzuki) motors. 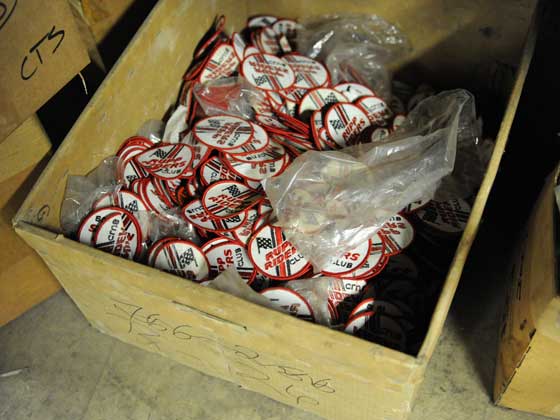 If you need 569 “Rupp Riders Club” patches, give CPC a call.

I wonder if there are any people out there still waiting for the renewal form for the Rupp Riders Club to arrive in the mailbox? 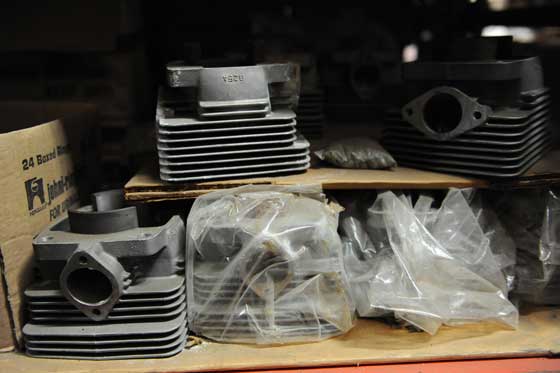 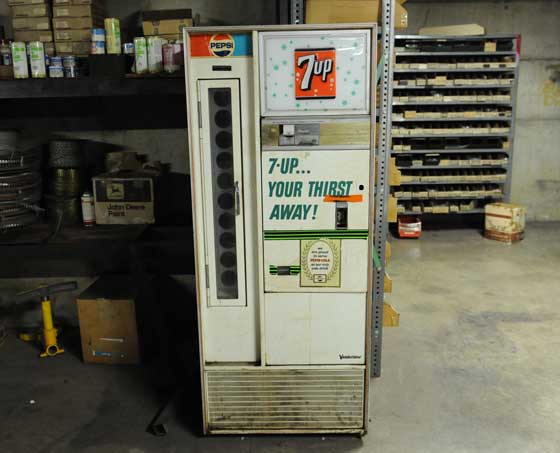 For so much of this day, I felt like I was in a 1970s time warp. And seeing goodies like this 7-up soda machine (complete with a couple portions of Arctic Cat Sno Pro hood decals) only reinforced the feeling. 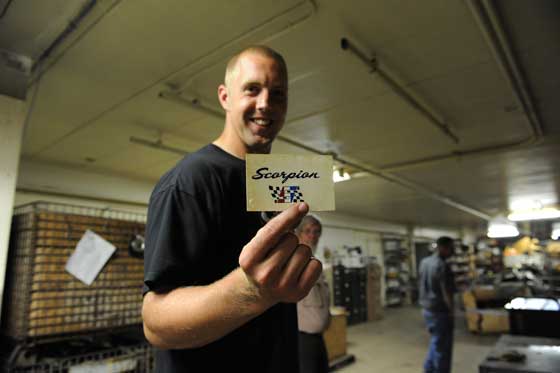 Thousands of decals, be it “Speedway” or “Scorpion,” filled boxes in the basement area, which made Bergstrom smile. 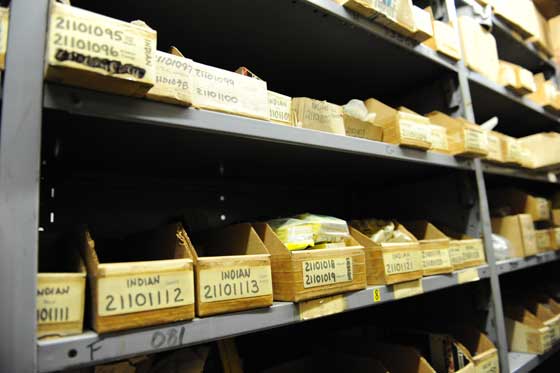 Oodles of Indian motorcycle parts filled several pallet racks. For a brand that has gone through an endless cycle of bankruptcies and ownership exchanges, I couldn’t help but wonder if Polaris would one day call CPC to buy some inventory? 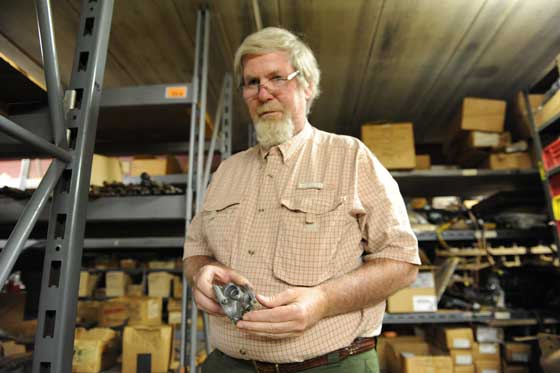 Here Grafft holds a Bing carburetor that, in his words, was the start of the entire CPC operation. Back in the mid-1970s, when he had trouble getting small parts for Sachs engines, he found a work-around by buying loads of assembled Bing carbs, then disassembled them and sold the individual parts.

I love how huge success stories often have their roots in such small, humble beginnings. 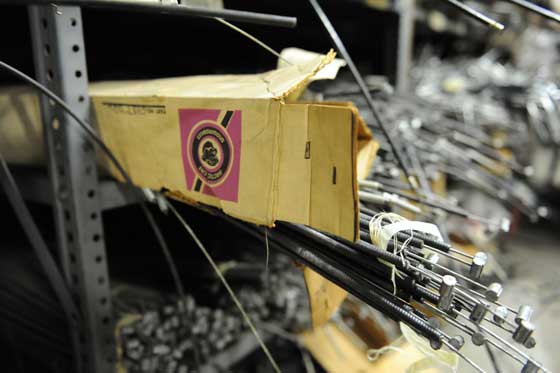 Seeing an Arctic Enterprises box with a dozen throttle cables sure gets the heart racing a little quicker. 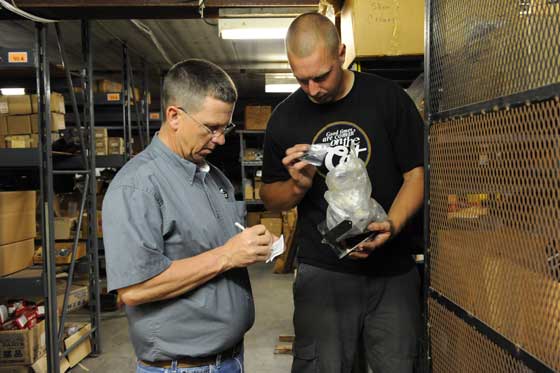 And the heart beats even faster when you find a bag of Arctic Cat windshield bolts! 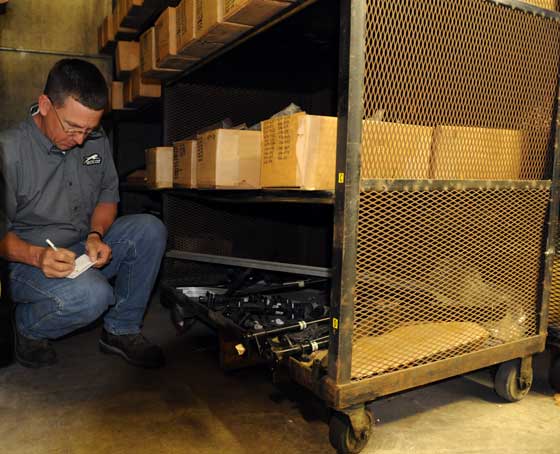 … including a few suspension arms and an aluminum slide rail that, at first glance, looked unlike any production Arctic Cat rail. As I write this now, I just got off the phone with Rowland who promises to look up these numbers in the next couple of days.

While we’d hoped to find a pile of vintage Arctic Cat goodness, we had to settle for a few odds and ends at the first warehouse.

Thankfully, this was just the beginning of all that we’d see that day.