For a short history CPC and how I ended up there, please CLICK HERE for Episode 1 of CPC Revisited.

To see what we uncovered at the first warehouse where we met Grafft, CLICK HERE for Episode 2. 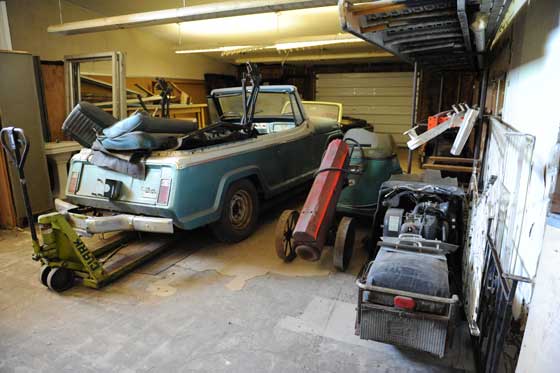 After meeting Jim Grafft and perusing the main CPC warehouse, our second stop proved to be the proverbial “Barn Find.”

Not an actual barn, mind you, but a storage building that contained oodles of treasure for fans of old motorized goodness. Like this vintage Jeep Jeepster project and two Johnson snowmobiles. 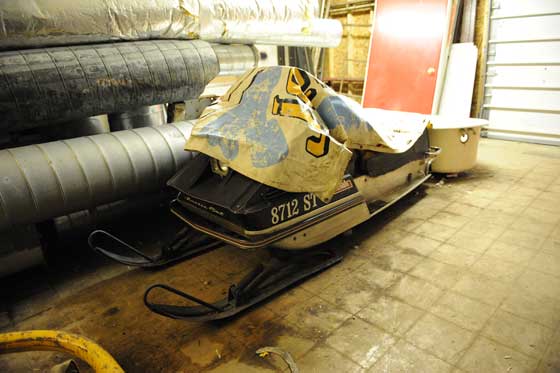 In other rooms, half-covered snowmobiles like this Arctic Cat Cheetah served as tasty appetizers for what would become a vintage fan’s full-course meal. 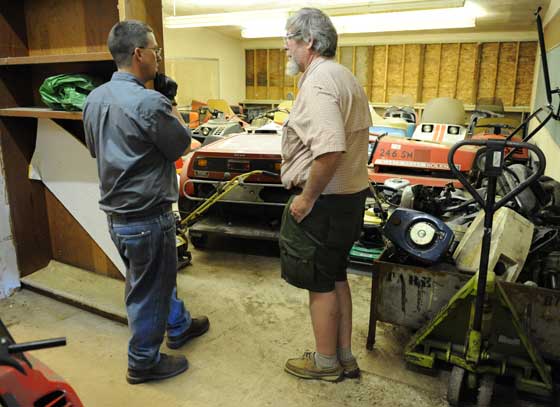 a. The vintage snowmobile project of your dreams.

b. A prototype snowmobile that begs you to think about what might have been.

c. The perfect “motorcycle” to attend your next Hell’s Angels meeting.

d. All the above. 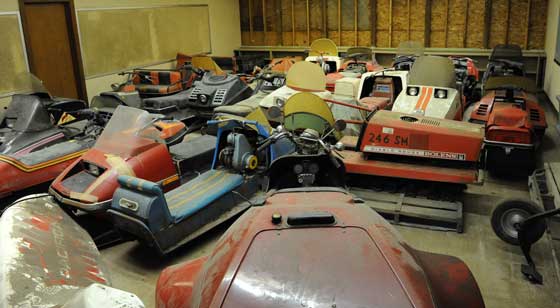 d. All the above!

It doesn’t happen too frequently, which is why it’s all the more wonderful, but when we first gazed into this room, there was a collective pause, where we scanned the room for a few moments in a feeble attempt to take it all in. Eyes dancing from sled to sled, it takes a many glances before you land on one particular machine and really start to think about it. 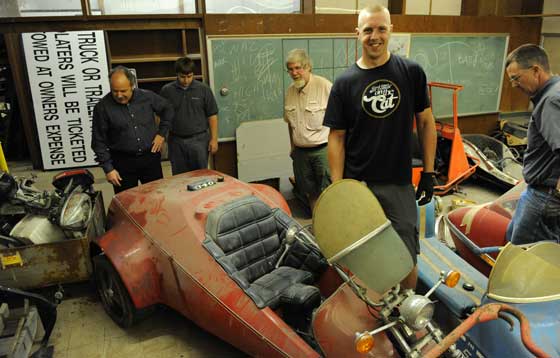 For Eric Bergstrom, “landing” meant imagining himself as a badass 1-percenter aboard this Rupp Centaur three-wheeler, blazing a path of destruction everywhere he rode. 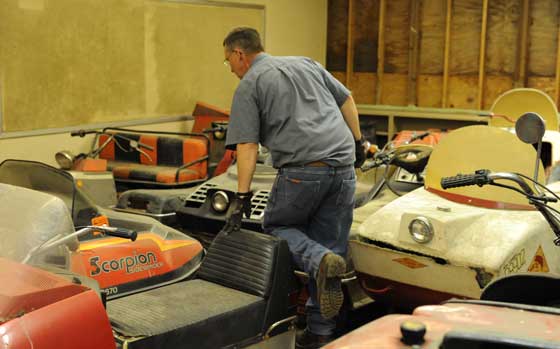 After surveying the room’s contents, Rowland began the delicate walk over and between sleds in order to get a closer look.

It’s funny, but the three of us visitors were very respectful and delicate as we navigated the room, yet each of us felt running and screaming and diving in head-first. 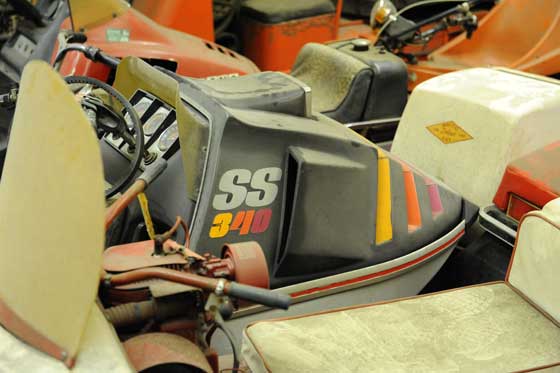 While of course I was mostly interested in the Arctic Cat snowmobiles in the room, I also paused at the other sleds that caught my eye. Like this Boa-Ski that, as a kid paging through snowmobile magazines as a kid, ALWAYS looked dang-cool. 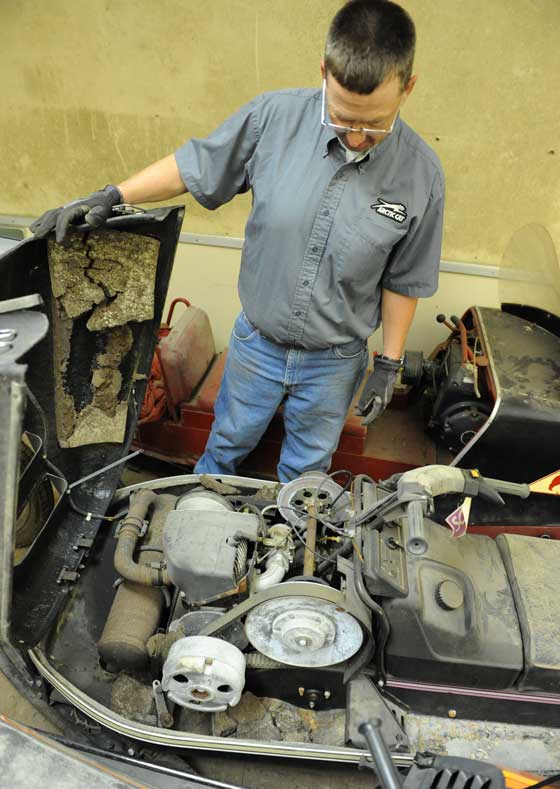 A connoisseur of rare Arctic Cats, Rowland bee-lined it to a sled that, to someone like me, appeared to be a regular old Cat. In this case, a 1980 Lynx.

Thankfully, Rowland sensed something unusual and, after opening the hood, confirmed his intuition while gazing at prototype engine!

It’s a 300cc single-cylinder mill with oil injection, which was slated for the 1982 Arctic Cat Puma (had Arctic Enterprises survived) and perhaps for the prototype “snow bike” concept that Arctic Cat had been contemplating in the early 1980s.

Rowland actually owns one of these engines, which he says was an all-new design and not an existing Suzuki sled engine that had been retrofitted for new duty. 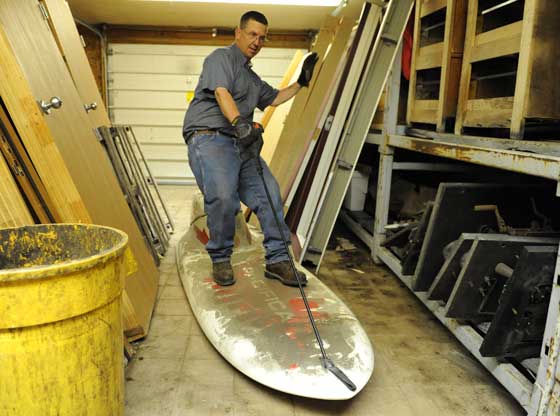 Rowland was so ecstatic about finding a prototype Arctic Cat that he immediately time-warped to his younger days as a rogue California surfer who turned the surfing world on its head by tossing aside a standard board for a jet-powered juggernaut.

After 10 minutes of listening to him make jet-like sounds while hanging ten, we shifted our attention to peeking into more rooms in this building of barn-finds. 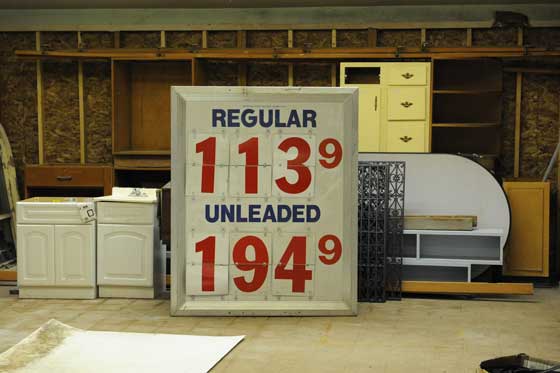 Who here besides me would like to see these prices again? 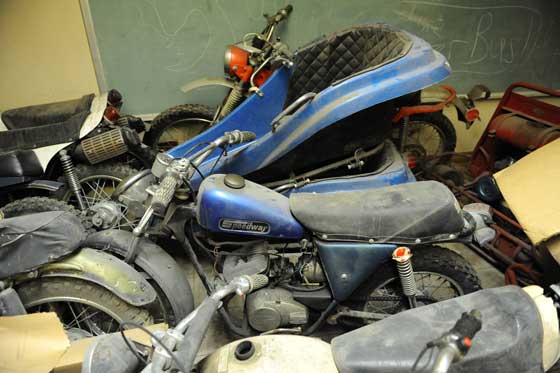 In another room sat a couple dozen mini bikes/motorcycles whose names have been lost to time, but that instantly transported me to my youth.

These are some of the brands that, 40 years ago, would capture my imagination when parked outside small-engine shops and the occasional hardware store, glittering with newness and temptation. No doubt, as a kid there were only two things in the world that I desired with every fiber in my body: a snowmobile of my own, and a mini bike.

These are also some of the brands that Grafft/CPC purchased a few decades ago, in much the same way that he purchased the remnants of Arctic Enterprises. 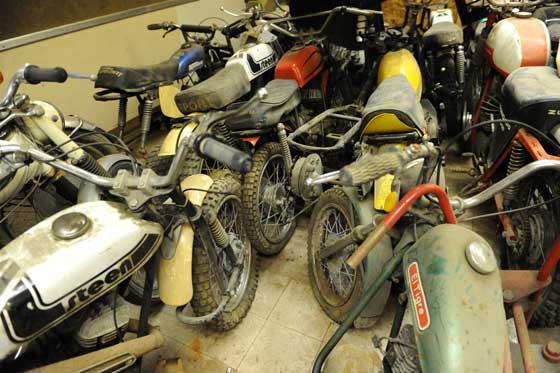 Check out the El Tigre on the right! This was a model sold by JC Penney for a short while in the 1970s, until (presumably) Arctic Enterprises told their lawyers about the trademark infringement. 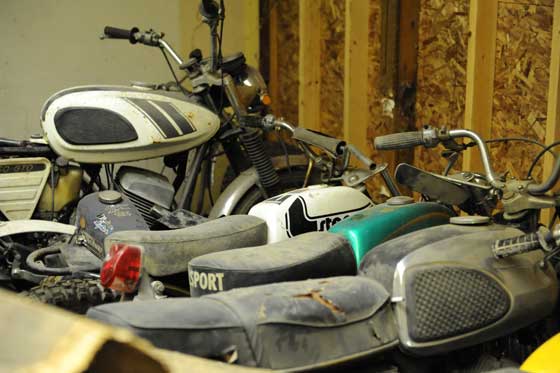 As much as I enjoyed the two-wheeled treasure, I couldn’t help but imagine the reaction of a motorcycle collector upon seeing this stash for the first time? 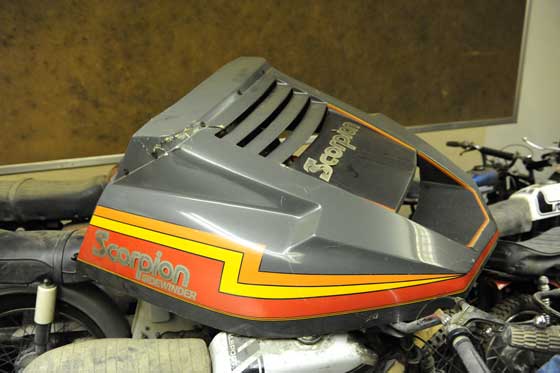 But like I mentioned before, we were there mainly to see the snowmobile stash. And wouldn’t you know it… there was a Scorpion Sidewinder hood keeping the dust off of some mini bikes.

Interestingly, Rowland pointed out that the “Scorpion” graphics on this hood weren’t the same as those that appeared on the final production of 1981 Sidewinders. The speculation, of course, was that the graphics here might have been slated for production on the ’82 models. 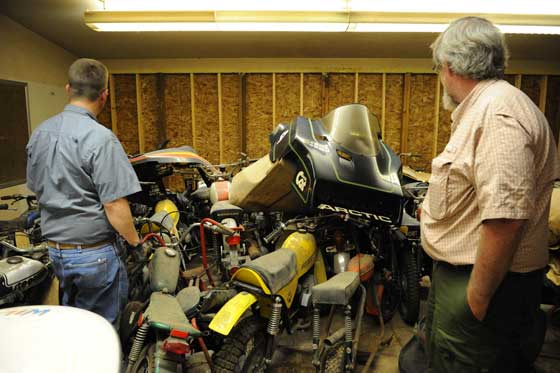 But the best snowmobile hood find of the day was yet to come. And that discover also elicited the best quote of the day, which came from Bergstrom:

“Sandberg… whatever you’re looking at, it isn’t as amazing as what’s in here.”

He was spot-on with that statement! 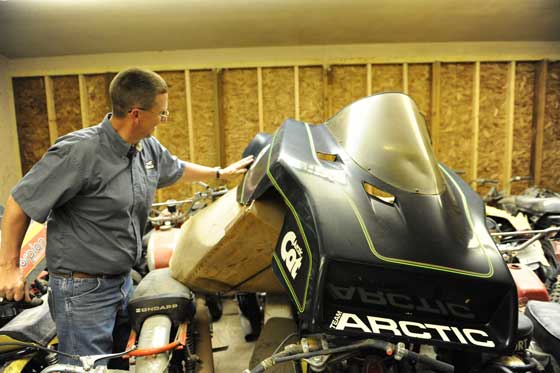 To walk into a room and see a 1981 Arctic Sno Pro hood… literally took my breath away. 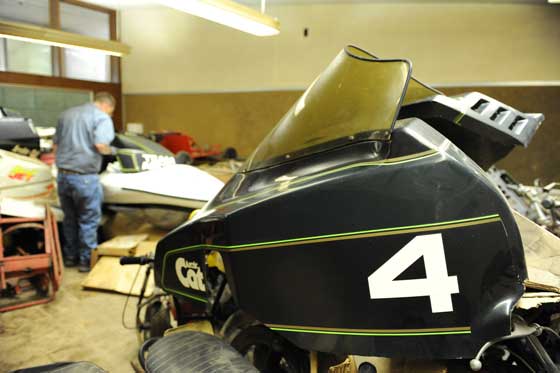 I think I even gasped when I saw the scuffs and cracking of fiberglass suggesting that this was no mere display hood, but rather a hood that had been raced!

But wait! What’s that over there, where Rowland is standing.

It’s a 1979 Arctic Cat Sno Pro hood, with the name Bob Elsner and a #1 leaving NO doubt as to its significance.

And behind it, perched on a pile of boxes, one of Jim Dimmerman’s Sno Pro hoods from the 1978 season!

After Rowland, Bergstrom and I stopped jumping up and down and screaming like school girls, we stood and gazed at the undeniable, historical beauty resting in the room.

Grafft had few details about the three hoods, other than he remembered that they were on display at the CPC warehouse for many years before he moved them to this storage facility.

1979 was the year Elsner won the Eagle River World’s Championships. Given that he raced several classes in those days, it’s most likely that this isn’t the same hood that crossed the finish line in first at the Derby.

But it begs the answer to a burning question: Does anyone know the whereabouts of Elsner’s Derby-winning Sno Pro? 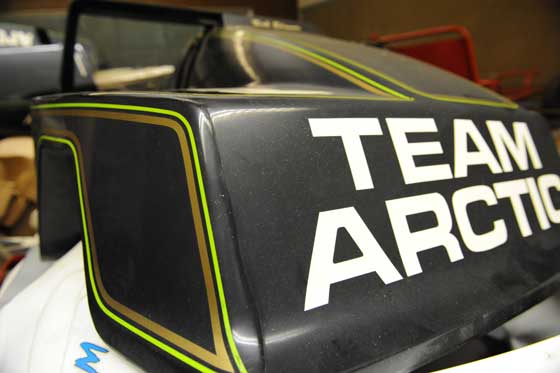 One question that had confounded Rowland for years was answered in this room: What did the metal-flake look like on the ’79 Sno Pro hood?

Sadly, the photo doesn’t show it well enough, but there is gold metal-flake here (used rather sparingly, I might add), which Dimmerman says was used only in 1979 and only on the Factory Team Arctic sleds of his and Elsner’s.

Witnessing the satisfaction in Rowland’s face upon solving this mystery was another highlight of the day. For historians like him, finding a “missing piece of the puzzle” is as good as it gets.

Rowland was so stoked that he went for another imaginative ride on the Surf Jet.

We only allowed him a few minutes of surfing, however, because there were more buildings to see, with more missing puzzle pieces that would be discovered.