For a short history CPC and how I ended up there, please CLICK HERE for Episode 1 of CPC Revisited.

To see what we uncovered at the first warehouse where we met Grafft, CLICK HERE for Episode 2.

HERE in Episode 3 – A Barn Full of Sleds, you can see some truly delicious artifacts, including a prototype and some legendary Sno Pro hoods. 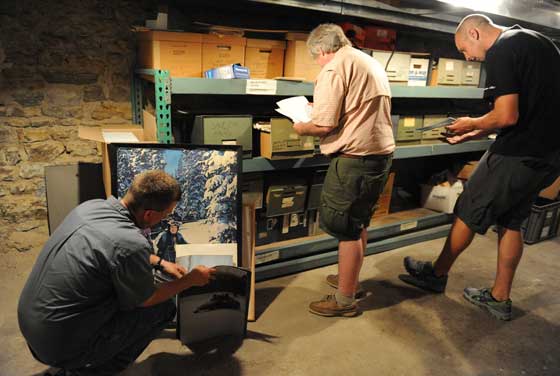 After having spent the first part of the day looking at warehouses and a “barn” full of snowmobiles, the second half was spent below ground in several of Grafft’s buildings where he stores much of the documentation of the various companies he purchased, including Arctic Cat.

Standing in these dimly-lit basements and lightly sorting through boxes and stacks of artifacts, it all felt like an archaeological dig. 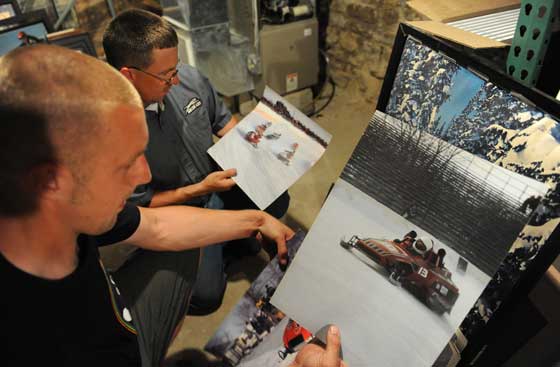 Here Eric Bergstrom (foreground) and Tom Rowland peruse some of the original print film used for the various CPC calendars from the 1980s.

I’m pretty sure that most of the photos used in those calendars were taken by Jim Beilke of Race & Rally/Snow Tech magazine. Next time I see someone from that crew, I’ll confirm. 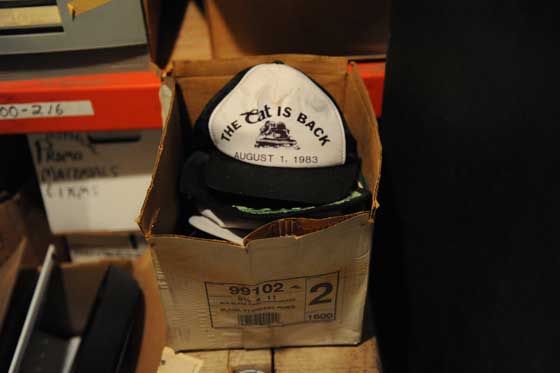 It’s likely that this is the hat Jim Grafft wore when Arctic Cat celebrated restarting snowmobile production in Thief River Falls for the 1984 model year. 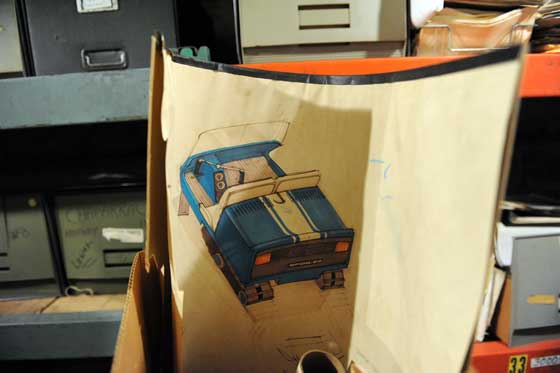 Some artwork of a prototype twin-track vehicle that appears to be from Speedway, one of the companies that CPC purchased.

It’s interesting how many different companies have played with the concept of a sit-in, twin-track snowmobile. 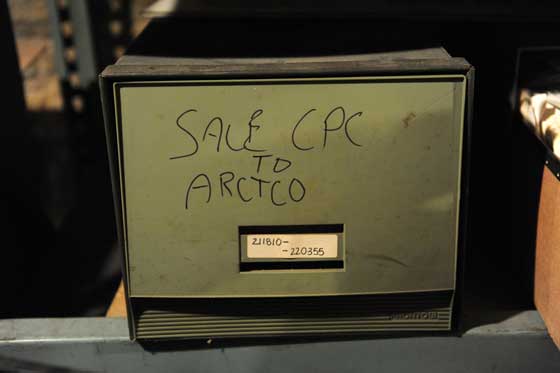 For historians of the sport, seeing a file box like this is truly just as fascinating as seeing one of Bob Elsner’s 1979 Arctic Cat Sno Pro hoods. 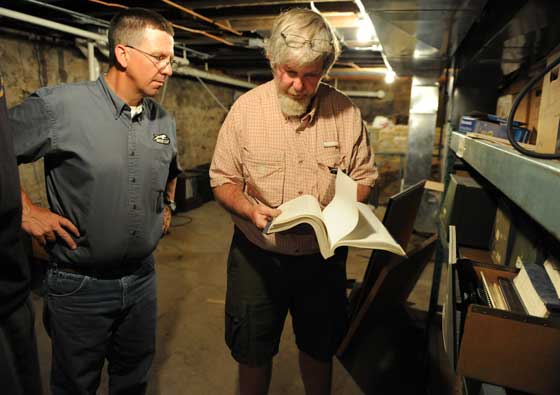 Grafft opened some of the files and paged through some of the information, including this document which appeared to be something of a prospectus that Arctic Enterprises prepared when it was trying to find a buyer in late 1981.

It’s not detectable in the photo, but I’m pretty sure that Rowland was salivating.

In all seriousness, this was another watershed moment during our day with Grafft, as there has long been (and probably always will be) so little public information about production numbers, future snowmobile plans and other such information from the waning days of Arctic Enterprises.

Seeing some actual documentation was a rare and amazing treat. 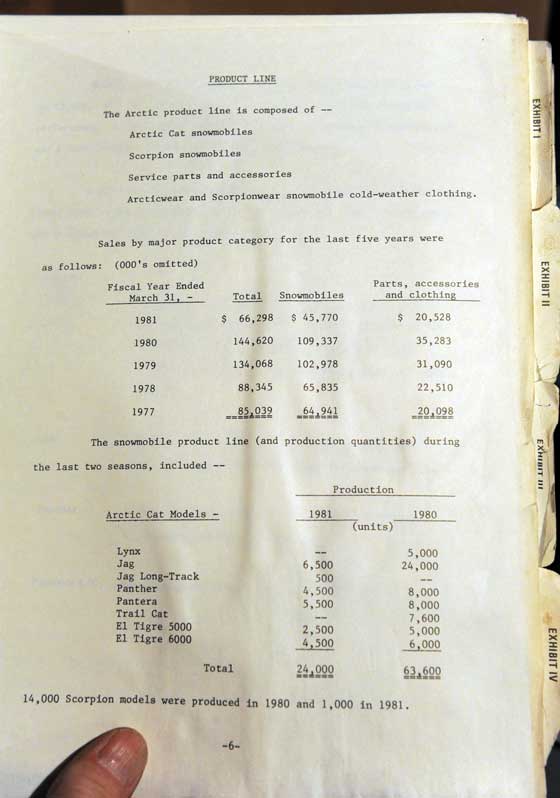 I’m sure Rowland will comment here, but this was the first time he had ever seen production numbers for the 1980 and ’81!

(Note: it’s my hunch that these production numbers correspond to the model year, not the calendar year in which they were produced.)

Again, this page was one of many from batch that Arctic Enterprises prepared as it was trying to find a buyer. Perhaps the numbers aren’t exact, but they must certainly be close. 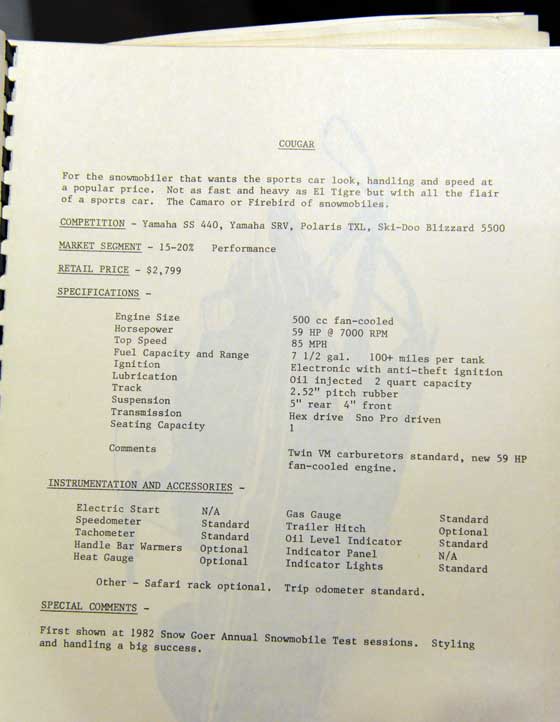 In the same document was this page highlighting the planned-for-1982 Arctic Cat Cougar. 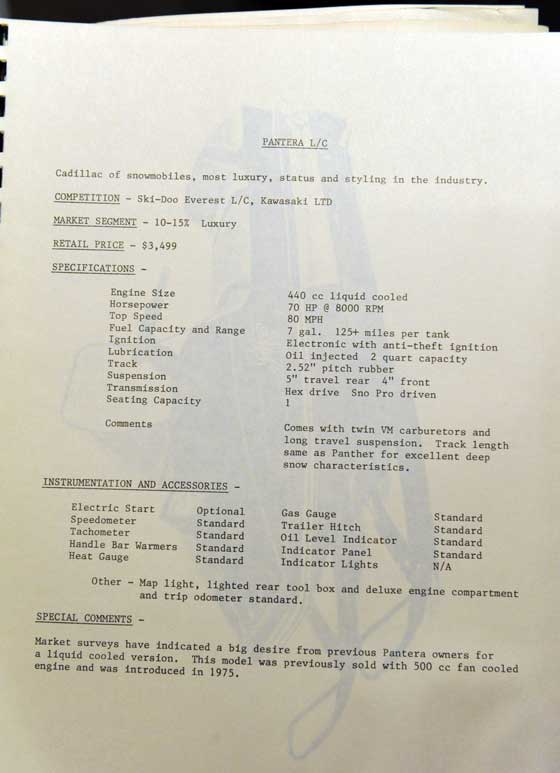 Likewise, here is documentation for what would have been the first liquid-cooled Pantera,  for the 1982 season. 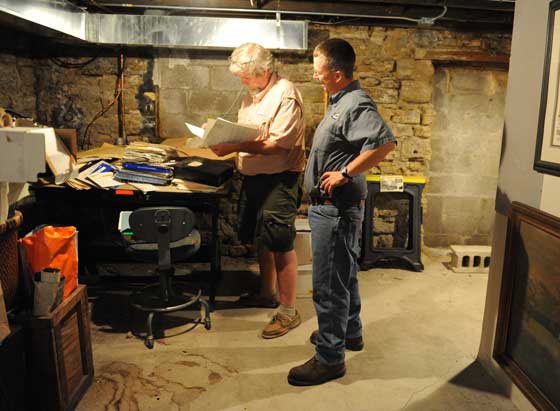 Grafft was quite gracious to allow us this peek into his private records. And though we would have liked to have spent a day or two pouring over the info in hopes of sharing it, we were Jim’s guests. He was understandably tentative about diving into this stuff.

So when he indicated that it was time to move on, we simply acknowledged our appreciation that we were able to see the artifacts that we did.

Our next and final stop for the day was a different warehouse, where once again we descended deep into a dimly-lit basement where Grafft had stored more items from his purchase of various snowmobile companies.

Seriously, the last basement we entered had just one working ceiling light. Using the flashlight feature on our phones (until the batteries were all but zapped) we dug through shelves and boxes and found a few final treasures. 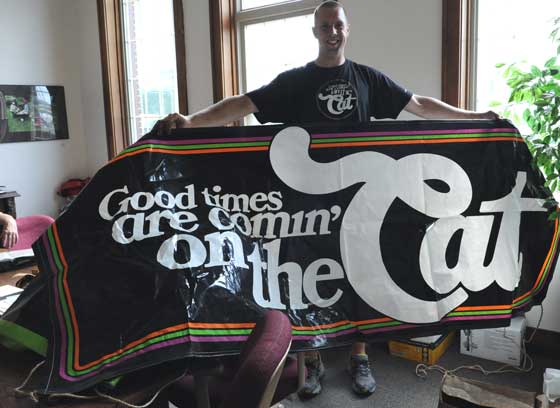 Righteous that Bergstrom discovered a banner that matched his wardrobe! 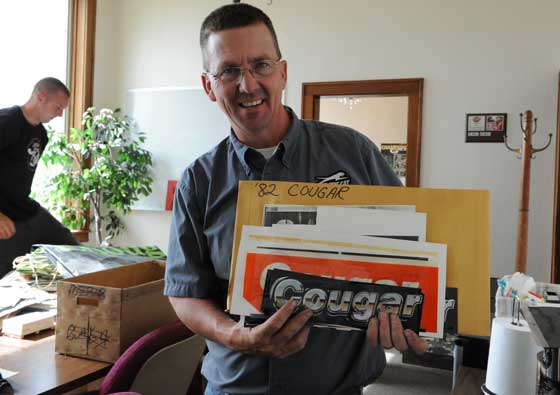 I’m not sure what pleased Rowland more, discovering a prototype single-cylinder Lynx, seeing the Sno Pro hoods of Jim Dimmerman and Bob Elsner, finding the production numbers for the 1980 and ’81 model Arctic Cats, or discovering a box that contained a folder of the graphics for the 1982 Arctic Cat Cougar.

The thing is, Rowland actually owns one of the prototype ’82 Cougars, yet his doesn’t have the dash/console graphic. And inside this folder, he found a template for the graphic, which he made a copy of and will have reproduced to help complete his sled.

Likewise, the folder contained several “Cougar” concept decals, including the mostly-white decal you see here. Seeing these artifacts is like going back in time and sort of witnessing those final days of Arctic Enterprises. 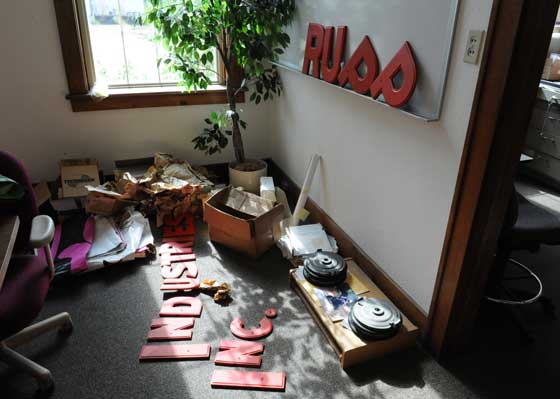 One of the coolest discoveries was a box that contained the letters that spelled “RUPP Industries Inc.” on the company’s snowmobile production building in Mansfield, Ohio.

Two comments I want to make about this:

Second, I felt a bit melancholy about seeing this box full of letters, knowing what hopes and dreams were extinguished prior to them being pulled off the building that they once graced. In that moment I also felt such deep gratitude that history unfolded the way it did, and that Arctic Cat was reborn.

Arctic Cat could have ended up like Rupp, but it didn’t. And I am so profoundly thankful for that.

I’ll talk a little bit more about that sentiment in the next (and last) Episode.