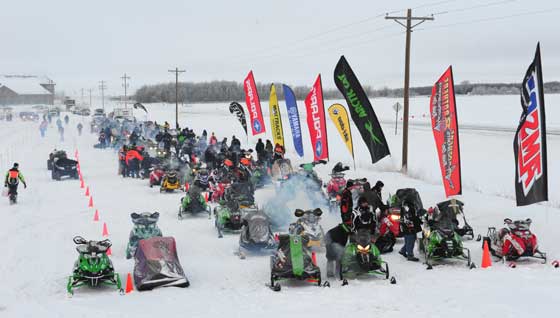 There were approximately 161 racers who came to Thief River Falls to test themselves and their machines in the USXC Seven Clans Casino I-500. They were greeted by fresh snow the few days prior, mostly-full ditches and the bristling excitement that this amazing event conjures in all who witness it. 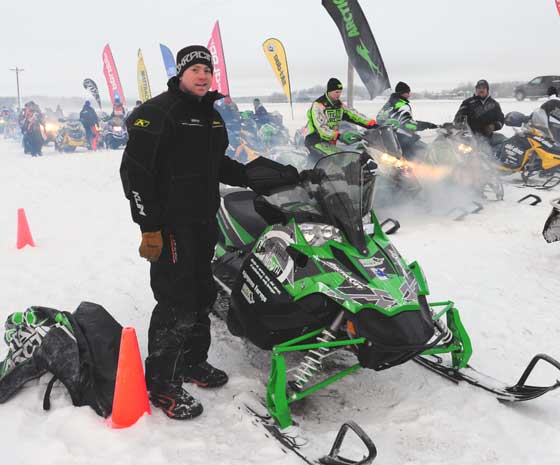 Going all the way back to 1966, the I-500 has captured the imaginations of riders who wish to pit themselves against the challenge posed by the terrain and other competitors. I met several such racers this year, including Ryan Weidemann of Stratford, Iowa. This was Ryan’s first I-500 and he was all smiles prior to the start.

Judging by his third place(!) finish in Sport 85, I gotta believe he was smiling at the end. 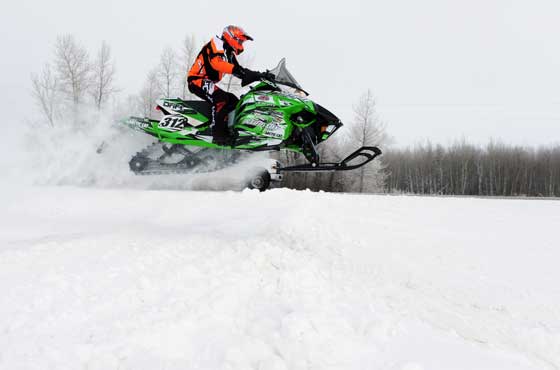 This was also the first I-500 for rookie Pro Zach Herfindahl, who came into the race a favorite for a top finish having finished on the box at nearly every race he’s been in this year.

Unfortunately for Zach, something gave way in his engine about 15 miles from the start, ending his race before he’d even worked up a sweat.

The I-500 has a infamous history of ending racers’ dreams, and the 2013 edition was no different. 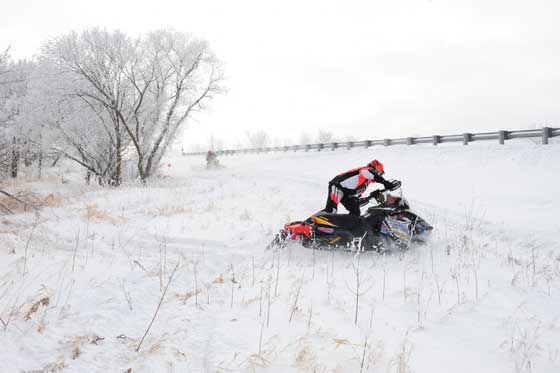 The race also has a long tradition of “Oops” moments, like this one of Team Maine’s Ryan Scripture, who accidentally blew a corner about 40 miles into the first day, just prior to the first fuel stop in Plummer.

It wasn’t Ryan’s fault though, as a less-than-ideal route marker was hard to see, which caught A LOT of racers off-guard. Once the first sled blows a corner (which happened here when leader Gabe Bunke came through), most other racers just follow the tracks in front of them. Pretty soon everyone has blown a corner.

It all usually works out, as it did in this case. Ryan would finish as very-solid 10th overall in the I-500. It was his first time competing in the event, and he loved the wide-open speeds and long distances of the event compared to the tighter and shorter courses that he’s accustomed to. 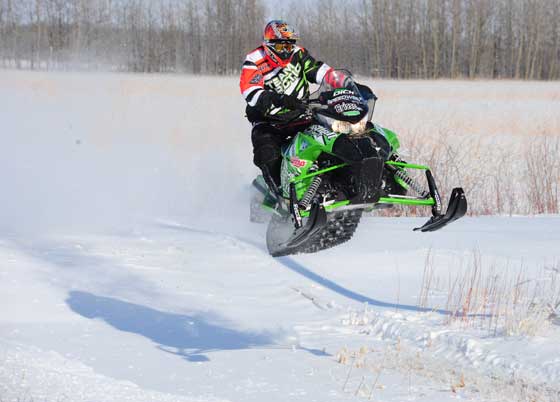 One guy completely familiar with wide-open is Brian Dick, who came into the race as the de facto defending champion, having won the 2011 USCC I-500 (there was no I-500 last year due to poor snow conditions).

Brian was definitely one of the favorites to win this year, but fate (and a stuck roller on his drive clutch) dealt a race-ending blow to his plans.

With several top Team Arctic racers out before finishing the first of three days, tensions mounted. 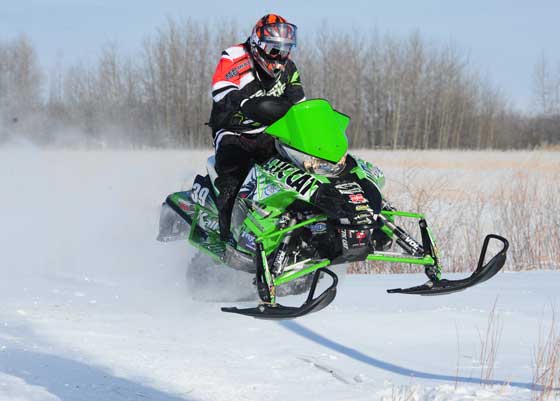 Although several top racers were already out, the depth of Team Arctic’s cross-country program gave hope that a win was still in the cards. In the hunt for a top finish was Cody Kallock, whose combination of speed and consistency make him a natural for long distance cross-country events the I-500. 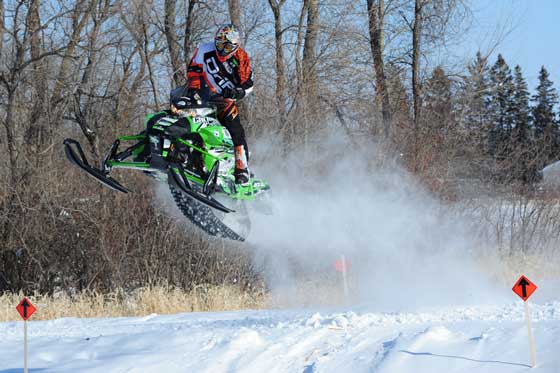 Coming into the I-500, Team Arctic Cat/Christian Brothers Racing pro Ryan Simons had swept the Pro finals in Oslo. And on the first leg of the I-5, he was his usual self, which is to say FLYING!

When the times were posted after the first leg, Simons had the fast time and a 2-min. 44-sec. lead over Cody Kallock in second.

Simons has been in a position to win this race before, but has suffered the fickle fate of luck and broken equipment. Nobody doubted that Ryan would be the fastest guy on the course, but there were questions about if he could go three full days at the breakneck pace that he’s accustomed to running.

Those very questions were being asked by Arctic Cat’s Roger Skime (left) and CBR mechanics Hector Olson and Corey Berberich as they talked with Ryan (right) following his fast-time finish after the first leg.

Like several Cat racers on the first leg, Ryan’s engine lost RPM throughout the day, which naturally brought the team’s concern into sharp focus.

A 20 minute conversation ensued during which this foursome discussed exactly what Ryan saw on his sled, when it happened and the various strategies they had to correct it. 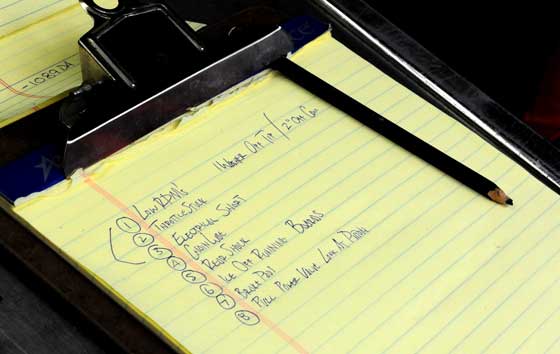 Hector recorded their challenges and priorities for the one hour maintenance session: 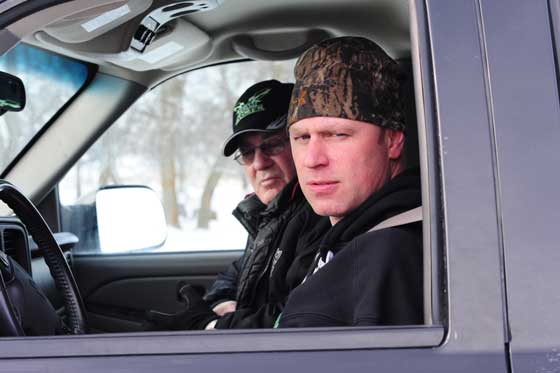 Despite Simons opening up a nice gap over the field, Mike Kloety (R) and Roger Skime showed the very real look of concern while they recorded times on the course during the second and third days.

Both have seen leads evaporate in a split second numerous times in their years of chasing this race. 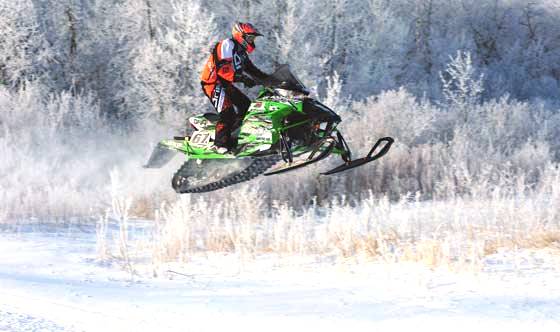 Heading out into the second and third days, Simons assured his team that he would ease off the pace just a bit. Yeah… right!

While indeed Simons probably did ease off a bit, his 90% pace is the equivalent of most riders’ 110% pace.

For a six mile stretch on the second day, I tried to catch up to Simons (who had just passed by in the ditch) while driving my truck down a stretch of Hwy 1 East of TRF. He’d gotten about 200 yards ahead of me, and my goal was to pull alongside of him to take some video.

With the needle past the 90 mph mark on my speedo, I never gained an inch on him, despite repeated down arrows and occasional road approaches.

My point: the speed that Simons races a cross-country is truly unreal. I will post some photo sequences and video later this week to illustrate the fact.

In the end, as you already know, Simons kept increasing his lead throughout the race to win by a whopping 11 min. 30 sec. It was an emphatic victory for the hard-charging rider, and well deserved. 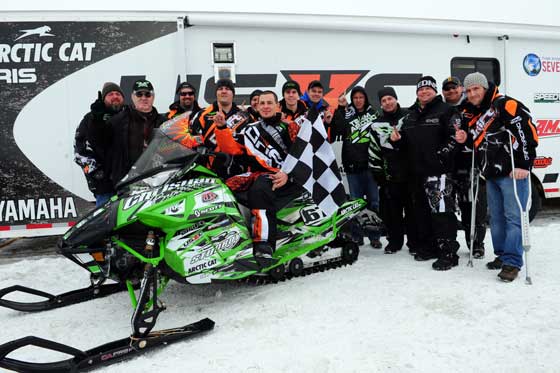 Feeling relief and celebration in equal measure, the Christian Brothers Racing team along with Roger Skime and Mike Kloety gathered for a team picture commemorating the historic win. 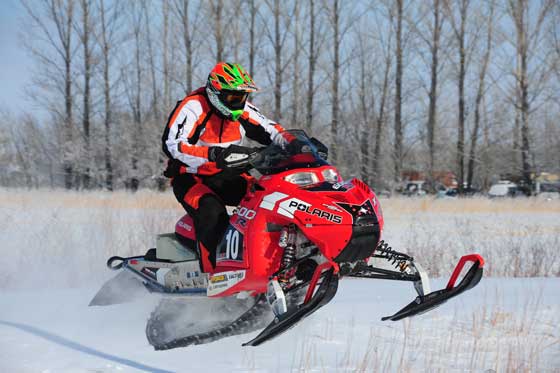 Finishing second was Aaron Christensen on a Polaris. Christensen is another fast, solid competitor who puts in the hard work and might one day win this race. 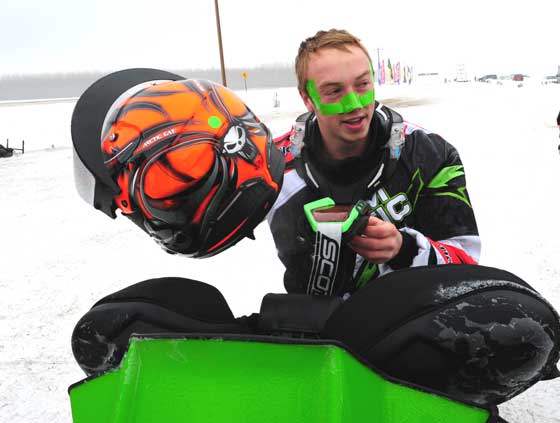 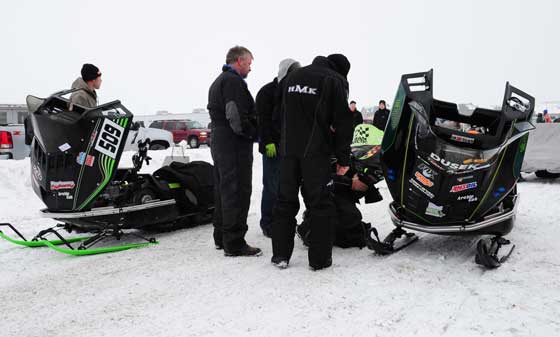 Meanwhile, as Simons, Christensen and Kallock were shaking hands at the finish line, the rest of the remaining field was still out on the 170 third leg, dealing with freezing drizzle, flat light and myriad other potential pitfalls.

One such group of competitors included the Vintage class racers, who numbered 41 strong (the largest single class)! 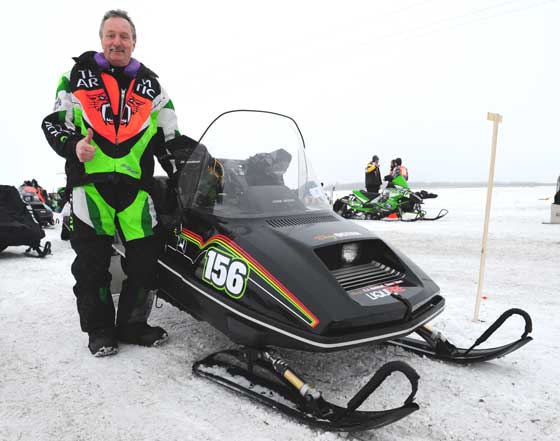 One such competitor is Team Arctic legend Doug Oster, who must still be conflicted about what brand he should represent at the I-500. For the second time in as many tries, Doug tried to get a John Deere Liquifire to the finish of the Vintage 500, only to DNF.

I suppose this means I could take my annual pot-shot at all the Enduro Team Deere vintage riders, especially Joe Rainville, but I won’t.

While I indeed like to tease these guys, the fact is I have the utmost respect for anyone who puts their chip in to enter this race. Countless are the hours racers and crews spend in the shop prepping their sleds and equipment… Thousands are the dollars spent on sleds, fuel, hotels and other such necessities… many are the days spent away from home, jobs and the people they love in order to chase a dream.

When that dream goes unfulfilled, it’s truly gut-wrenching. Especially when the culprit is equipment failure.

So I tip my hat to you Doug and all the other racers who didn’t make it to the finish line of the I-500. Just know that your story is as important as those who win, even if it wasn’t the happy ending you were hoping for. 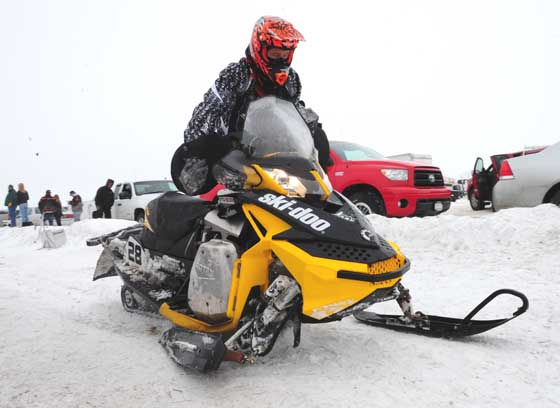 Another tough ending, this time for Justin Tate who suffered the slings and arrows of outrageous fortune just 15 miles from the finish. He sort-of limped it in (riding down the shoulder of the highway). Fortunately he was okay.

One guy who enjoyed the ending of the 2013 I-500 was Cole Nymann, who captured first place in the Semi Pro 600 class and sixth in Pro 600 (USXC allows racers to enter “up” in multiple classes)!

And winning yet another I-500 (this is her seventh, I think) was the irrepressibleJolene Bute, who only seems to get faster with each passing year. 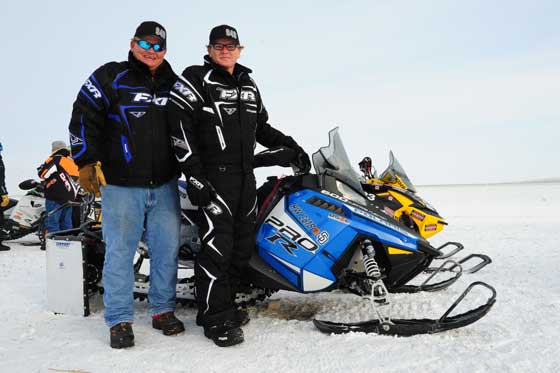 Maybe my favorite story of the event involves these two brothers, Richard (R) and Jeff Hanson. Both grew up in Southern Minnesota (riding Arctic Cat) and dreamed of racing the I-500.

These days Richard lives in Southern California, but he’s never pulled the I-500 off his bucket list and, sure enough, mustered the courage (and time) to finally enter this year’s event.

I ran into them twice during the three days of racing, and each time they were so grateful that the race was happening and that they were experiencing it… 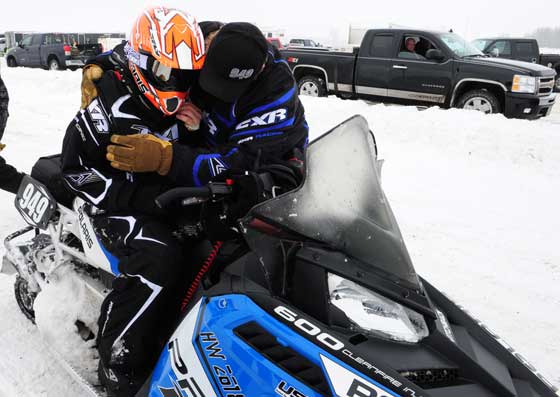 … and when Richard came across the finish line on the final day into Jeff’s bear hug, their voices cracking as they expressed thanks to one another… I choked up. Hell, I’m choking up now as I write this.

It was a lifetime dream played out over three tough days that culminated in a moment of pure grace.

THIS is what the I-500 is about: The courage to chase a dream and the humility to respect the outcome, whatever it is.

Congratulations Richard and Jeff, you guys did it!

Another happy face at the finish belonged to Jon Arneson, who won the 40-plus class and finished fourth (a mere half-second off of third!) in the Semi Pro class.

For the first time in I-500 history a Junior class was added to the mix. Running only on the final day, it was open to racers 12-17 years old. Eleven brave boys entered and 10 finished, with three girls entered in the Junior Girls class and two finishing!

Coming in first in the boys class was this guy, Mason Kallock, who looked like he could go out for another lap of the 170-mile course.

Serious respect to all these young kids! 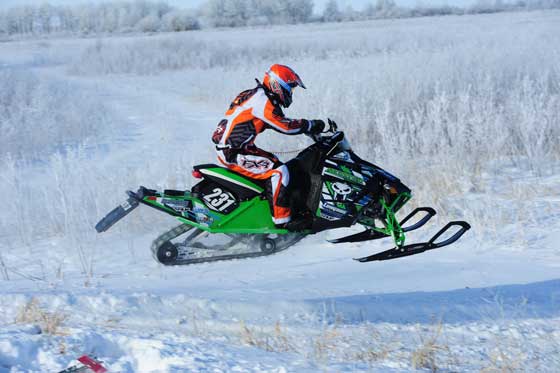 I’m going to show two photos of the Expert 85 class winner Benjamin Langaas. The first (above) shows the graceful beauty of cross-country… 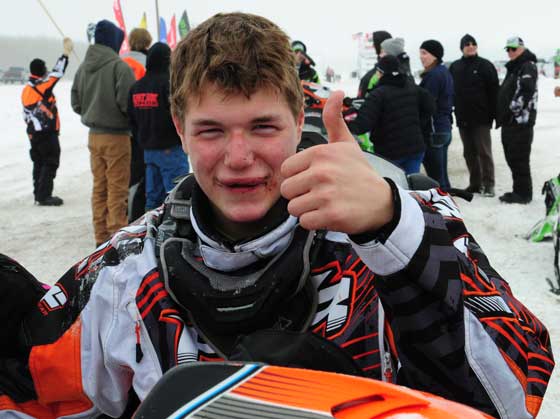 … while this shows the rugged beauty. Benjamin did a number on his lip the final day, but he was all smiles.

He’ll deal with the pain of recovery this week, but he’ll never forget the joy of having finished.

Congratulations to everyone who entered the I-500. And thanks to USXC and the Seven Clans Casino for making it all possible.