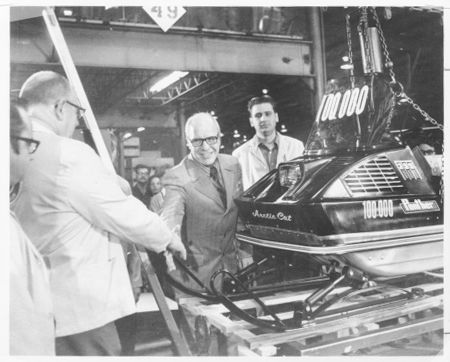 Lowell (middle) in 1971 during a special ceremony commemorating the 100,000th snowmobile produced for the 1972 season.

On Sept. 13-15, former Arctic Cat President Lowell Swenson will be postumously inducted into the International Snowmobile Hall of Fame in Eagle River, Wis.

A true pioneer at Arctic Cat and in the powersports industry, Swenson was a key figure in the history of Arctic Cat, taking over as president of the company in 1966 and effectively guiding it through a decade of fantastic growth.

Also being inducted at the 24th Annual ceremony will be Jim Duke, Russ Lemke, Bob and Marie Linn, Jerry Wanty, as well as the International Groomer of the Year and International Snowmobile Club of the Year. There is also a “Reunion” at the Derby Track, grass drags, vintage show, swap and racer garage. CLICK HERE for more info.

Below is Swenson’s bio as it will appear at the ISHOF.

Lowell Swenson –  from Minnesota. Optimism was a keyword in the life of Lowell. It helped him survive 50 bomber combat missions in WWII, during which he earned the Distinguished Flying Cross, served him through leadership roles in several companies and was passed on to his children who continue in his footsteps.

Lowell’s involvement in the snowmobile industry began in 1965 when he mortgaged all he had and bought Arctic Enterprises in Thief River Falls, MN. The company had been struggling to keep up with the booming demand for its snowmobiles and needed a financially oriented business man to direct it. Lowell was just that person.

From a few hundred snowmobiles sold in 1965 to just over 112,00 by 1971, Swenson’s optimistic leadership was the key in making Arctic Cat a leader in the industry.

A new manufacturing plant was added, the company went public, sales continued to grow and new products added to the line. Throughout all this growth, Swenson worked to create a positive and upbeat image of the sport. He was on the board of ISIA, supported many local charities and civic organizations and always operated with high integrity, honesty and super optimism.

In 1978 Lowell sold his interest in Arctic to a private investor who liquidated the company three years later due to the bad economy and lack of snow years.

A year later, Arctco, Inc. was started and Swenson returned to take an active role in rebuilding the company. He served as a director and was instrumental in raising the much needed capitol to get the new company started. He served in this capacity until 1999.

Throughout all this involvement with Arctic Cat snowmobiles, Swenson was involved in numerous civic organizations and foundations. His love of flying got he and his two sons involved in the airline industry when he bought Mesaba Aviation in Grand Rapids, MN eventually selling it off to Delta Airlines.

Lowell Swenson was intuitive enough to see an opportunity, worked hard to carry out his dreams in a positive thinking and upbeat attitude. He was always ready to give credit to his fellow employees, friends and family for his successes.