A good ol’ snow storm dumped 9 inches of snow on southern Minnesota this last week of 2015. It was one of those occasions when the weather forecasters’ dire warnings about big snow were accurate, with 6-9 inches blanketing the southern third of the state.

A group of us had previously made plans to ride Minnesota’s North Shore on this day, but the allure of fresh snow in the beautiful Bluff Country area of Southeast Minnesota caused a shift in plans.

While the last whisps of snow fell early Tuesday morning, my cohorts Pat Bourgeois (OSM Magazine), Kale Wainer (Arctic Cat), Dean Kasparek (bro-in-law) and Calvin (son) descended on the town of Zumbrota (above), unloaded our sleds and took off with one simple plan: experience the cool bluffs, rivers and towns that define the region.

With snow on the ground, snow falling from the sky and snow being plowed off the roads, it was as if we were pretty suddenly thrust into REAL winter. It’s pretty great when that happens.

While everyone was antsy to ride, I thought it would be best to read through the latest issue of OSM Magazine before we went too far. I learned what’s hot and what’s new in the sno-mo-world. 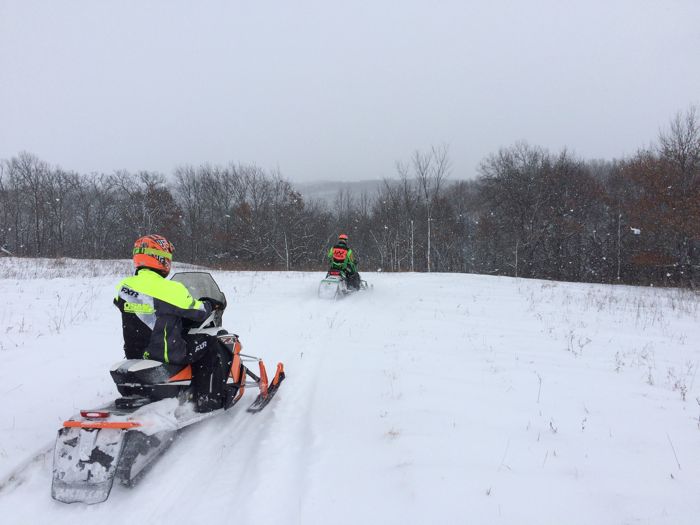 Fair warning: Because of the clouds and falling snow, I do not have that perfect photo to illustrate the steep and beautiful bluffs of this region.

There are wonderful trails throughout SE Minnesota. They offer a variety of terrain, from the rolling farmland that’s on top of the bluffs to the steep, forested traverses that extend down to the many creeks and rivers that cut meandering paths throughout the area.

Lots of trails run parallel to the rivers.

Cool bridges cross many of the waterways, like this one on the outskirts of Elgin, Minn…

… and this one somewhere between Hammond and Millville.

Add to the mix a variety of pine groves plus long and twisty buffer strips in the hilly farmland, and you have a recipe for scenic, fun riding that is worth experiencing. This part of the state doesn’t always have the best snow, so it’s worth hitting when the conditions are favorable.

After putting some miles on his new Arctic Cat Crosstrek 6000, Kale busted out a backwards “Safety Dance” number from the one-hit wonder band, Men Without Hats.

Cal was not impressed.

I threw down some truly spectacular skillz, carving the powder like the true honch that I pretend to be.

And when I threw my Crosstrek 8000 on it’s side, I simply got off and walked away. #trueprofessional

We rode the trail into Mazeppa, home of the MotoProz Arctic Cat dealer.

On most rides like this we would typically find ourselves stopped at a great dealer like this, because Pat mercilessly abuses and breaks his snowmobiles (or he forgets his helmet and has to buy one) and needs help fixing his stuff. But this was a rare occasion when everything worked smoothly.

Crossing another creek, somewhere between Mazeppa and Oronoco.

All totaled we logged 110 miles; enjoyed a gas station lunch of beef jerky and Corn Nuts; rode ourselves dizzy throughout the bluffs and river trails; banged a few ditches; put one sled on its side; and read a truly great snowmobile magazine while parked along the trail.