The last weekend of 2017 brought the first USXC cross-country race of the 2018 season, held at its traditional spot on Pine Lake in Gonvick, Minn.

Also known as the Gerald Dyrdahl Memorial Classic, this fine event was once again the showcase for sled speed and handling, racer talent, sled preparation and ridiculously cold temperatures.

Like, it was -750 degrees F, not including the windchill.

But to get a little more perspective, read below. 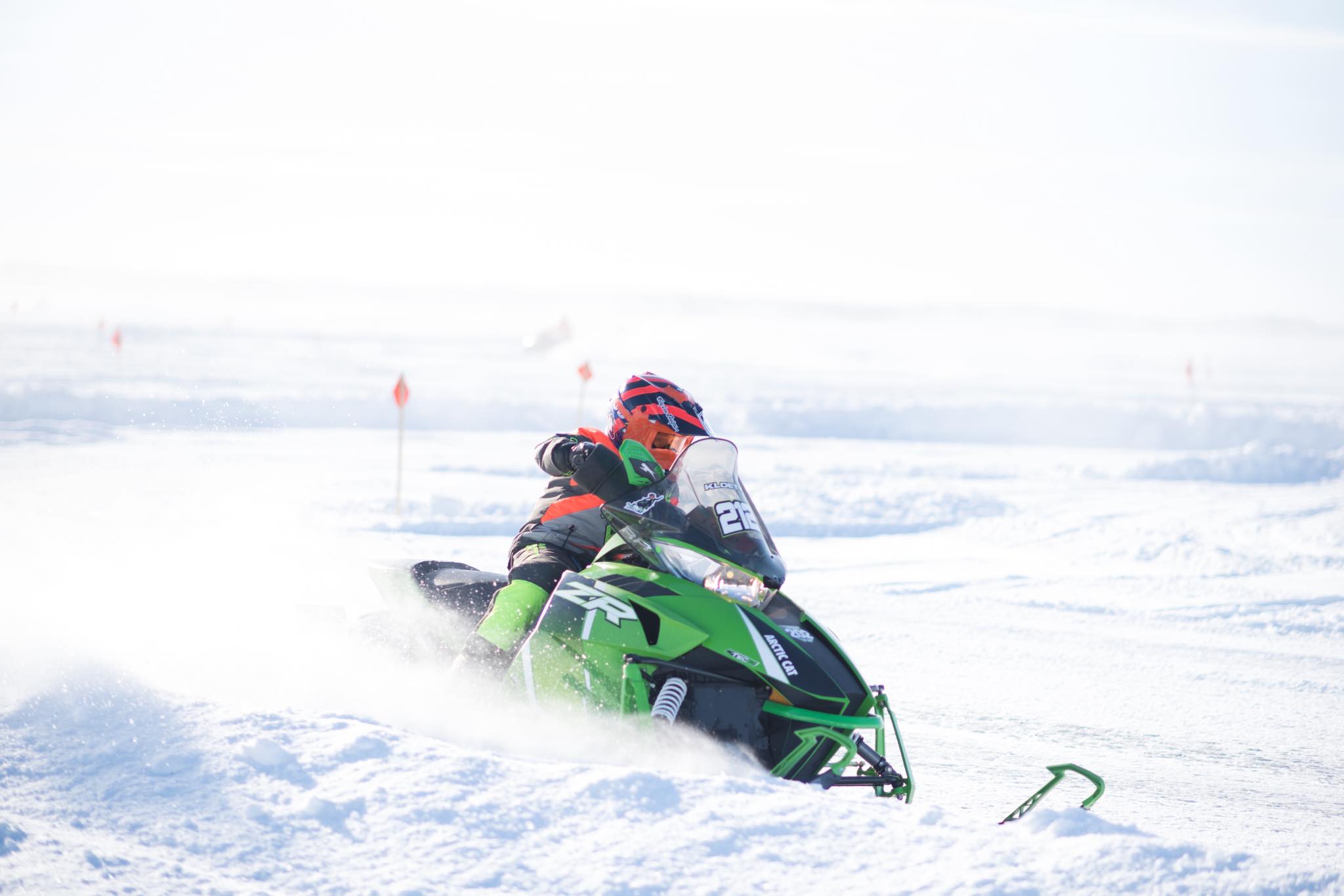 As the son of Team Arctic Race Manager Mike Kloety, Derek Kloety has literally grown up immersed in snowmobile racing. He’s going at it for a full season this year, and he started it off by winning the Junior 10-13 class. 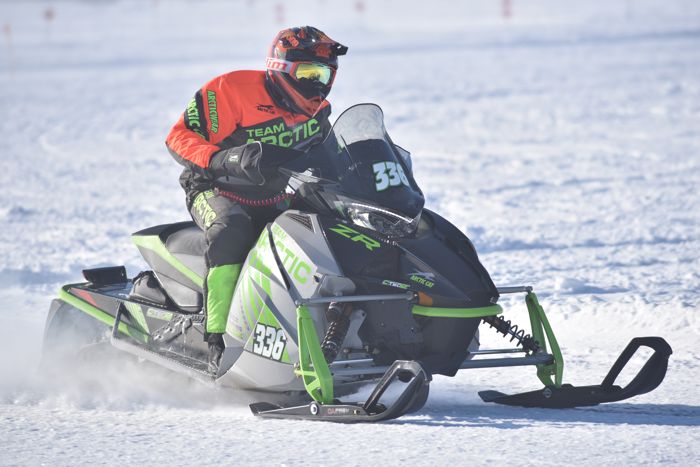 Damned the cold temps, Nicholas Nyquist was on FIRE at Pine Lake, winning Junior 14-17 and Sport 600 Limited. It’s been fun watching Nicholas’ progression over the past 3-4 years since he started racing, steadily getting faster and more confident with each season. Now he’s at the top of his respective classes. 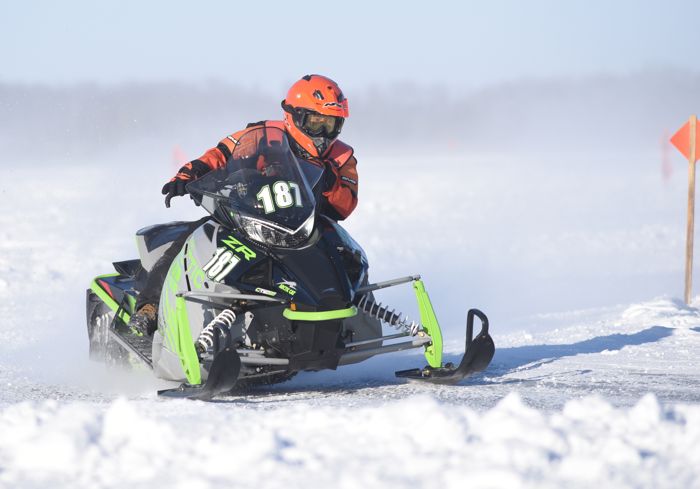 Tyler Knutson rocked it in the Sport 600 class. 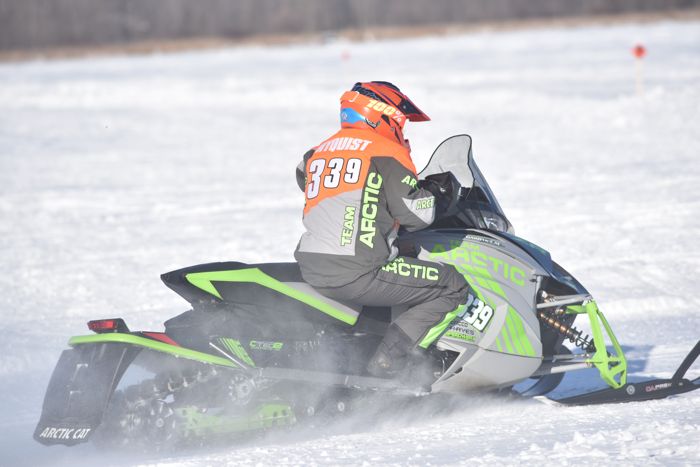 For sure there was smiling faces in the Nyquist family truck on their drive home from Pine Lake. Because in addition to Nicholas’ two wins, brother Morgan led a Cat podium sweep of the Trail class. 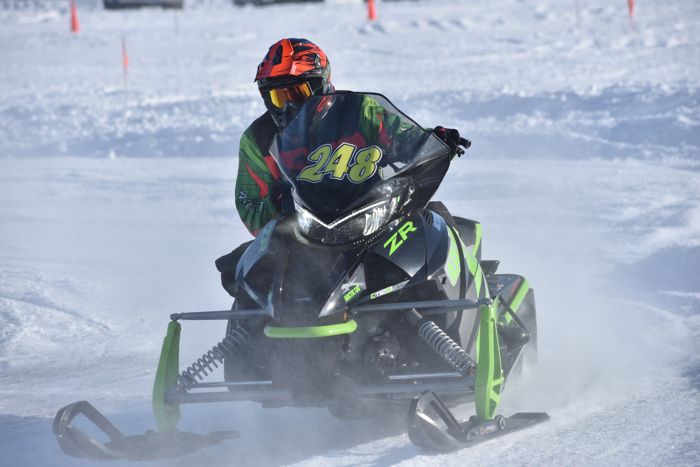 Jordan Bute led another 1-2-3 Cat finish, this time in the Expert 600 Limited class. 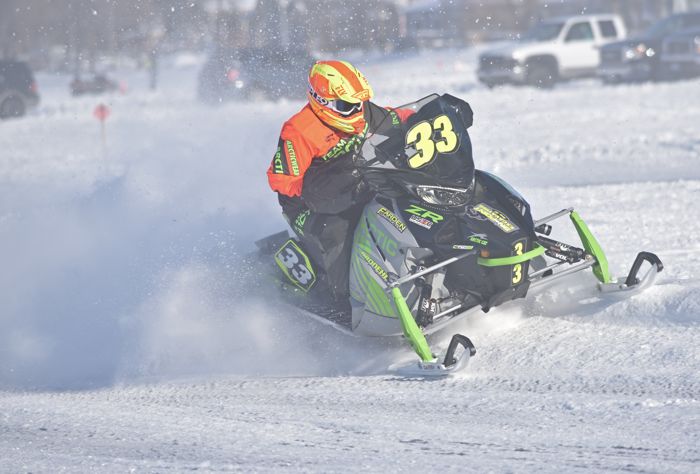 Brian Brodehl was another double class winner at Pine Lake, taking both I-500 Open and Masters 40 Plus. 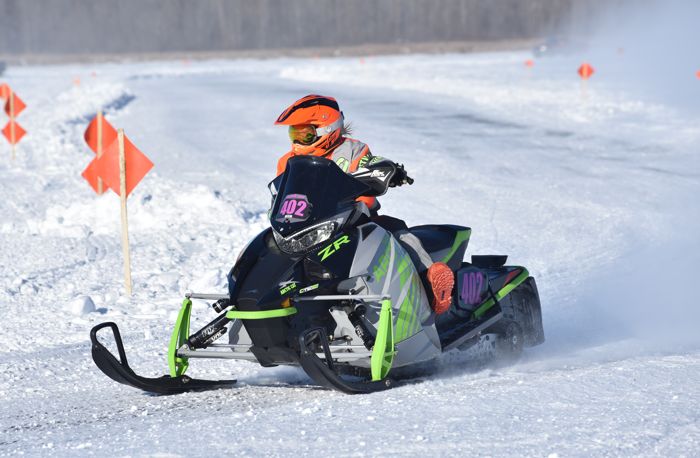 It was Savannah Landrus taking a commanding win in Pro Women. 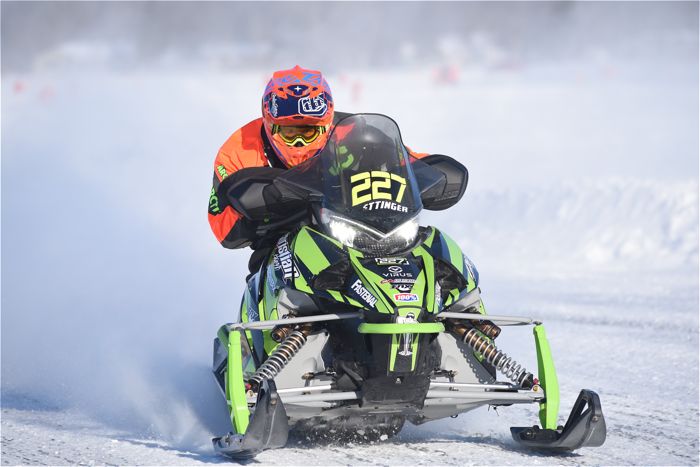 There’s going to be GREAT racing all season long in the Semi Pro and I-500 classes, including between Tyler Oettinger (above), Cole Nymann and David Brown. Oettinger took the win in I-500 Factory 600 at Pine Lake, and grabbed second in the Semi Pro class. 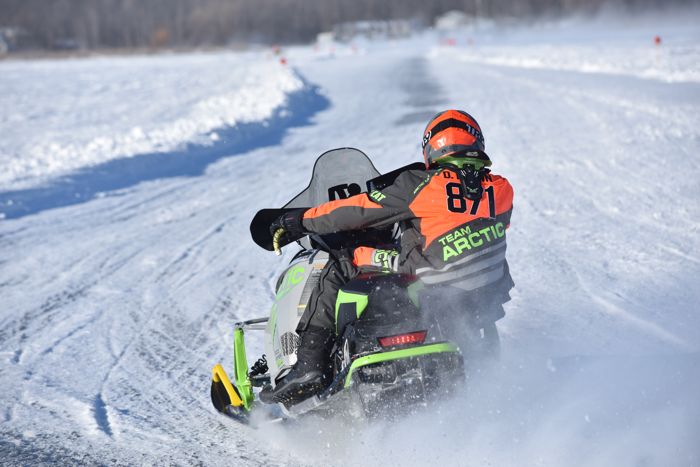 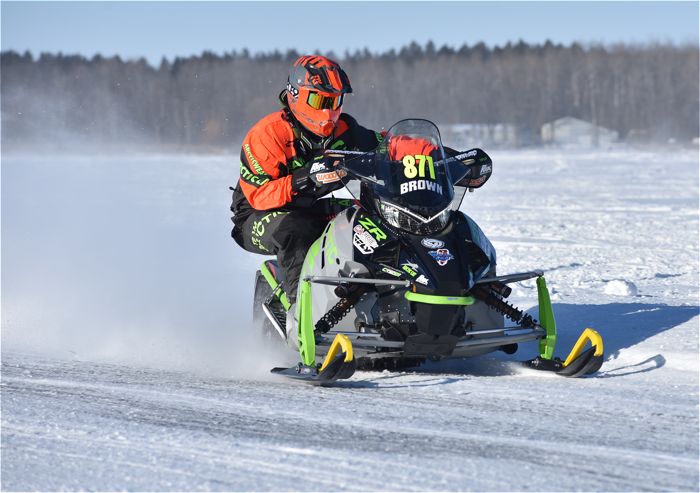 At the ripe young age of 16 and racing in the Semi Pro 600 class for the first time, David Brown proved why I think he’s a future superstar of cross-country racing. Clicking off lap times that didn’t change by more than a couple seconds, Brown had been running in third for awhile, then second and finally moved into the lead by the final lap to take the win (with Oettinger and Nymann taking second and third for a Cat sweep). Afterwards I heard that Brown’s sled was a few MPH slower than the top sleds, which means Brown won by being fast in the corners, not making any mistakes and not getting tired. These are the hallmarks of great racers. 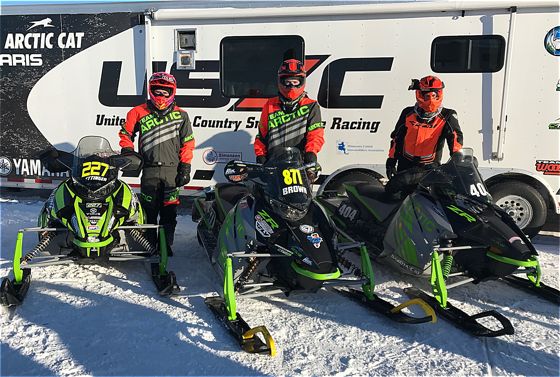 Oettinger (left) and Nymann (right) are two other racers who are poised to win this season while ascending the ranks of cross-country elite. Gonna be some great battles! 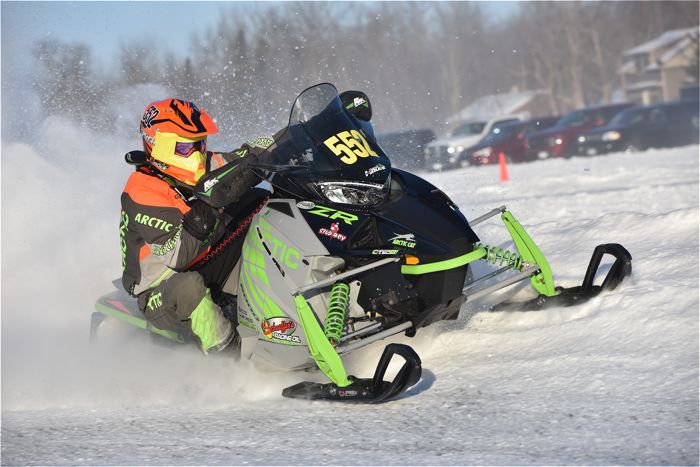 On to the Pro Factory 600 class (aka Pro Stock 600), where I want to give a huge shout out to Matt Feil. This is Feil’s second season in the premier class. Like a number of other Team Arctic racers, his star is still rising, and it’s fun to watch. Some racers burst onto the scene, seemingly out of nowhere, and they’re heralded as the next-big-thing. Others steadily work their way to the top.

Feil and his crew were aiming for a top-10 at Pine Lake, which would have truly been an awesome performance. I’m happy to report that Matt jammed for 6th place in the fastest class of them all, finishing well ahead of many racers whose names are associated with podiums and wins. It was an awesome finish and bodes well for the rest of the season. 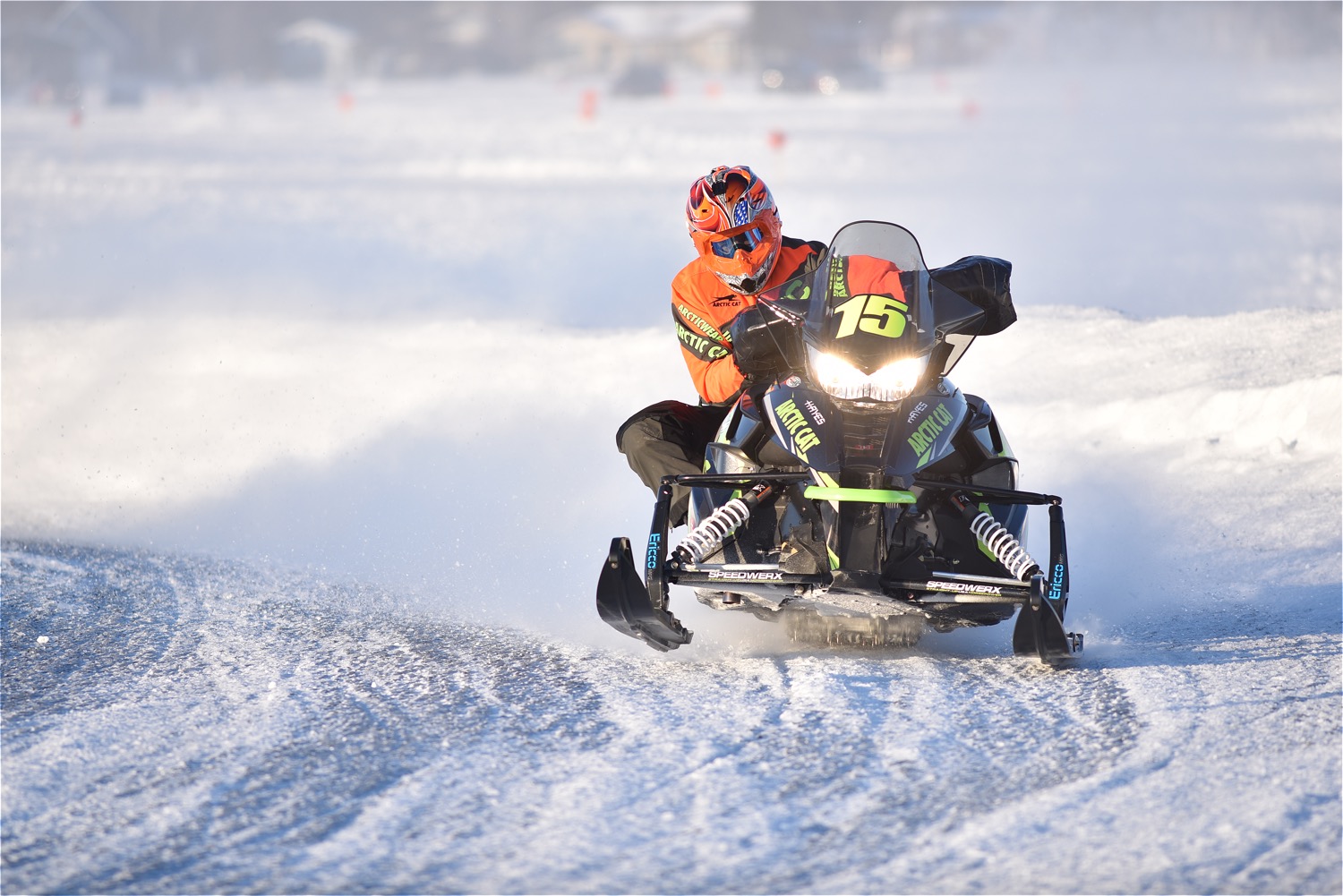 Wes Selby started the weekend off by winning the Pro Open final on Saturday aboard the Speedwerx-tuned Open sled. Always one to think outside the box, Selby opted to race the 4-stroke ZR 7000 in the Pro Factory 600 stock class on Sunday, hoping that it’s 3-4 mph speed advantage (compared to the ZR 6000R XC and other 2-stroke race sleds) would be enough to overcome the weight penalty. Unfortunately, a nagging problem with the track derailing in high-speed corners (of which there are a lot at Pine Lake) meant Wes wasn’t quite close enough to contend for the win, although fourth place is nothing to complain about. 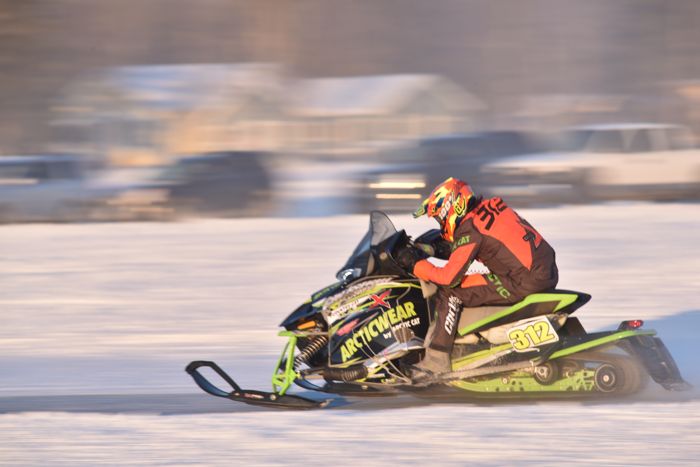 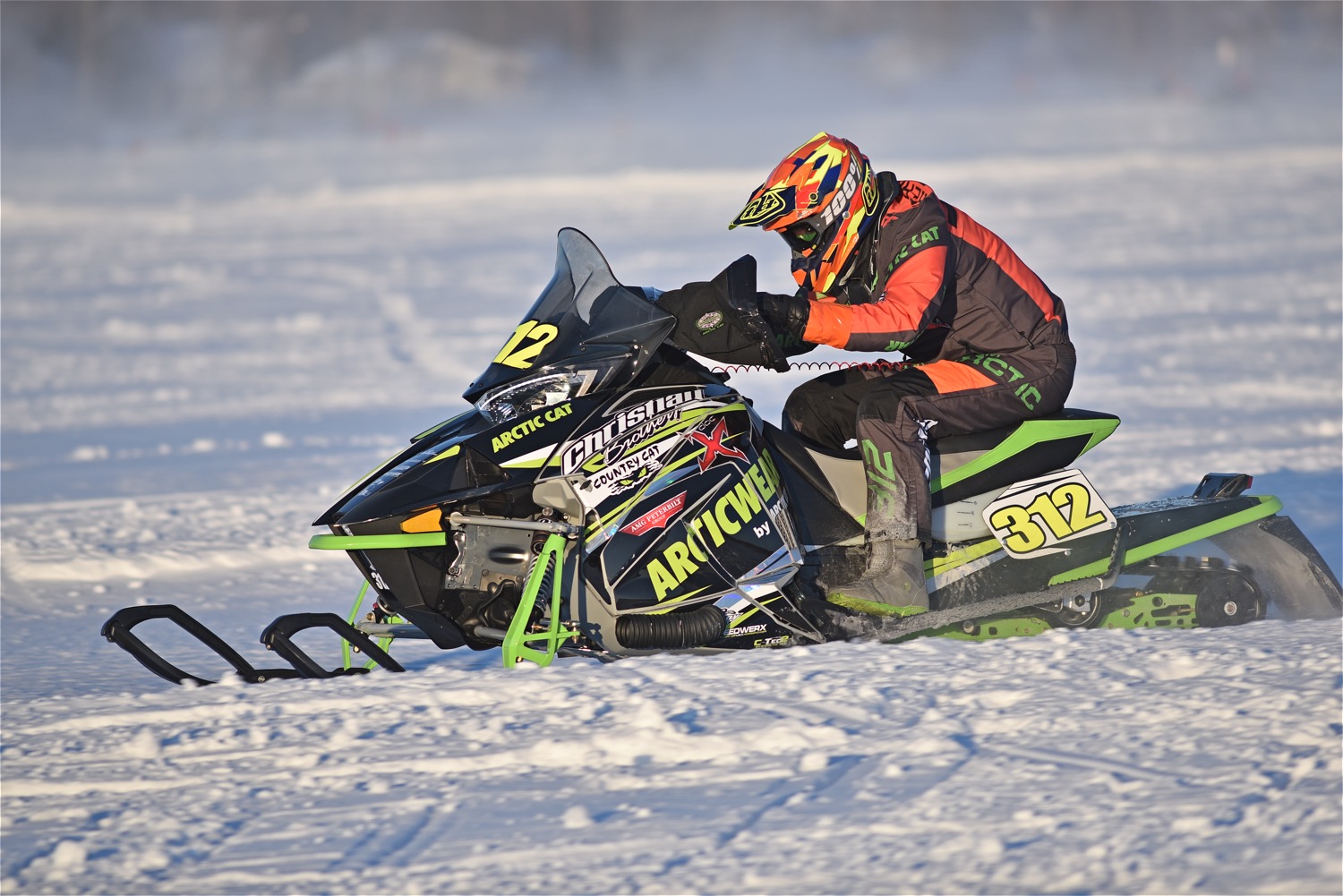 For the second year in a row it was Zach Herfindahl putting his name on the Gerald Dyrdahl Memorial trophy as winner of the Pro 600 class, but it was anything but a cake walk for the defending USXC champ. Herf battled with Gabe and Taylor Bunke for most of the race, and only in the last couple laps got ahead on time (because of snowdust, all Sunday finals were run time-trial format against clock, rather than heads-up style).

Smart, in-control and willing to experiment to always find the fast lines, Zach worked his fanny off to get the win.

I’d also like to apologize to Hannah Diesen and Annie Olson for NOT getting photos of them. Both of you deserve to be featured here.

Congratulations to ALL the racers who kicked-off the 2018 XC race season at Pine Lake. You’re all winners in my book.

“Pine Lake is well known as a high speed race track. Mother Nature gave the racers and teams -25 F temperatures and lots of snow dust which, along with the high speeds, added to the challenge. Preparation and the right equipment was the key to success. In the hands of our racers and their crews, the new ZR 6000R XC with the ProCross chassis and C-TEC2 DSI engine gave us a phenomenal start to the season. Congrats to all the racers and USXC for a great first race, and what is shaping up to be an exciting season of cross-country competition.” 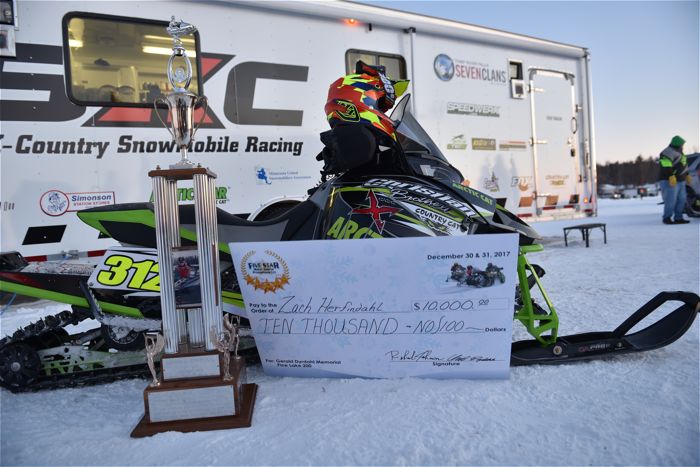