Last week some friends and I played hooky and spent the day riding Wildcats along Minnesota’s famed North Shore. 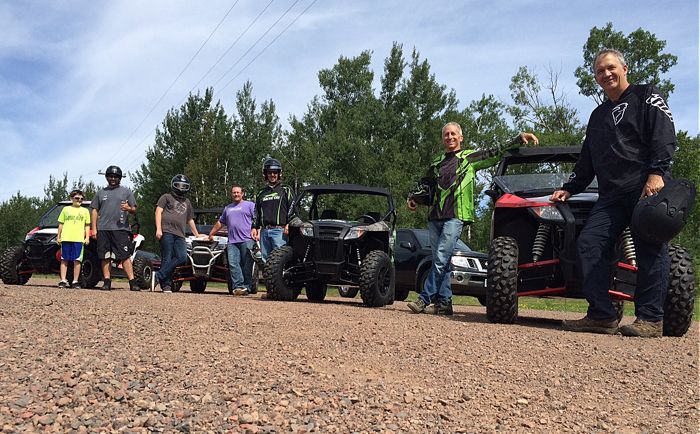 I use the term “friends” pretty loosely, since several of these jackwagons spent much of the day ridiculing my sweet method for transporting (and unloading) a Wildcat in my pickup truck. 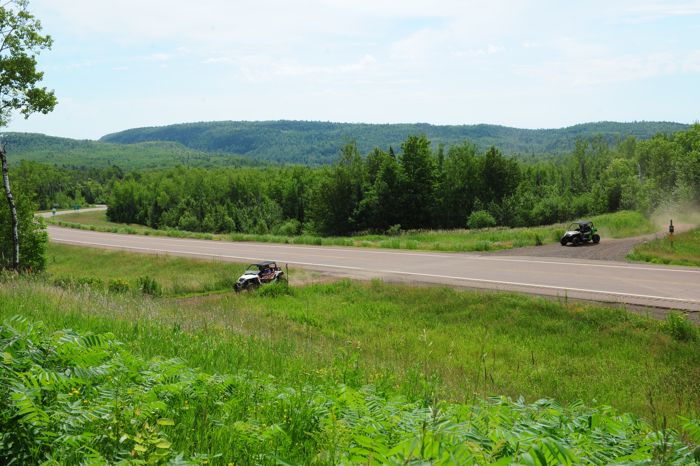 We departed from Beaver Bay, Minn., roughly one-third of the way along the North Shore between Duluth and Grand Marais. Although most of the group had snowmobiled in this area many times, it was the first time any of us had ridden ATV/UTVs in the area. 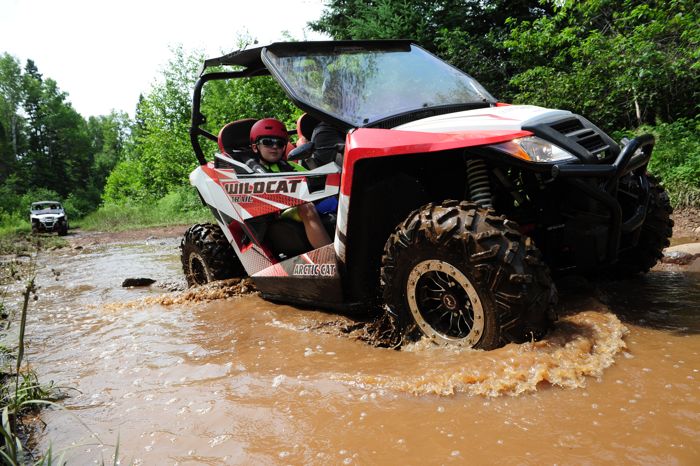 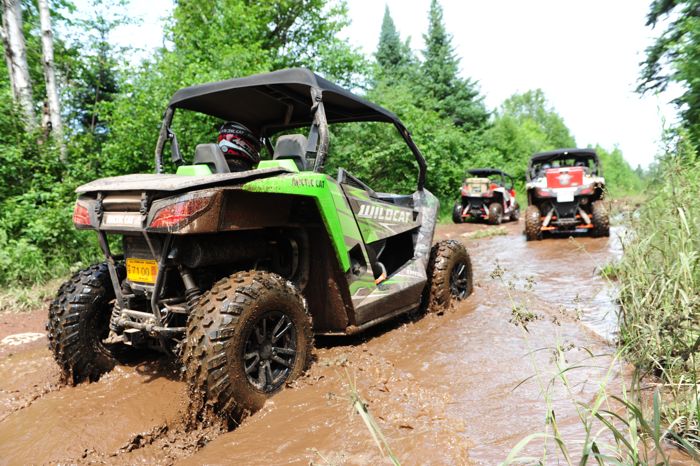 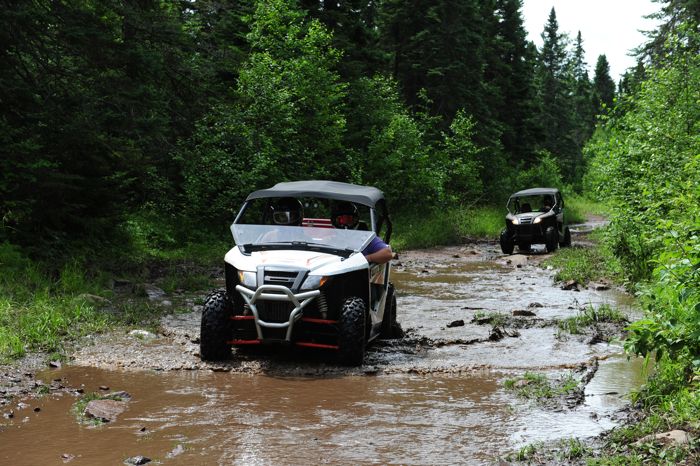 A hard rain a few hours prior to our arrival delivered lots of water holes along the 60 or so miles of Red Dot and Moose Walk ORV trails. With so much rock along the North Shore, this meant mostly just water holes rather than mud pits. 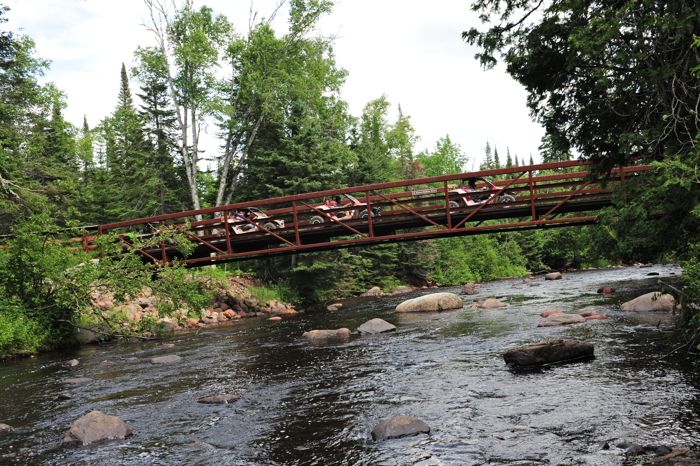 It also meant the many rivers and streams were flowing nicely, such as the Baptism River here near Finland, Minn. 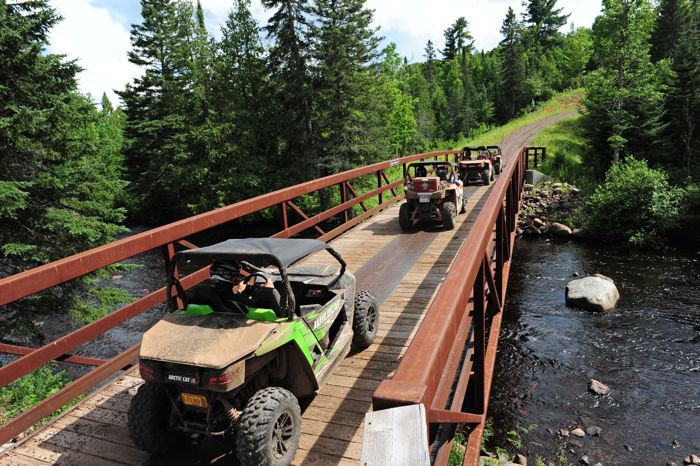 The Moose Walk and Red Dot ORV trail clusters are a mixture of snowmobile trails, dedicated ORV trail and a few stretches of gravel roads. Nothing too technical or that required 4wd, but still fun and pretty scenic at times. 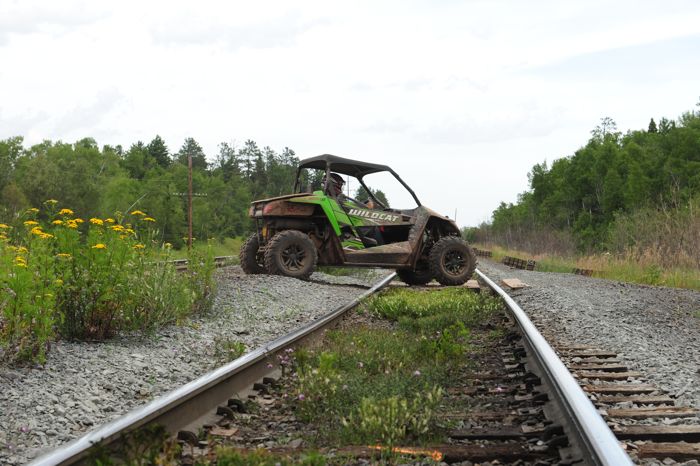 This part of the North Shore is the terminus for lots of various mining operations, with various railroad tracks throughout the area. 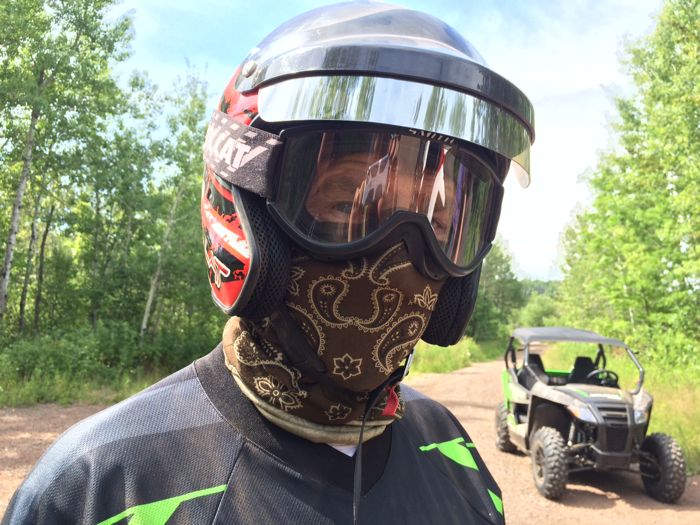 With railroad tracks come outlaw bandits whose gun wielding antics bring terror and robbery to the innocents. Tom Rowland is one such bandit. 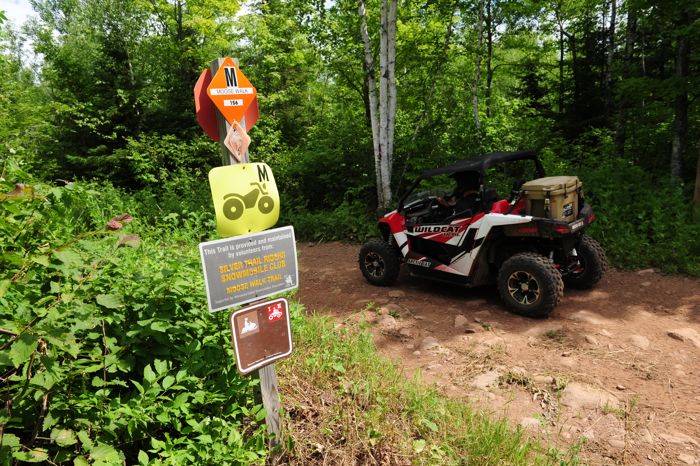 Big shout-out of thanks to the Silver Trail Riders Snowmobile Club who make these trails possible! 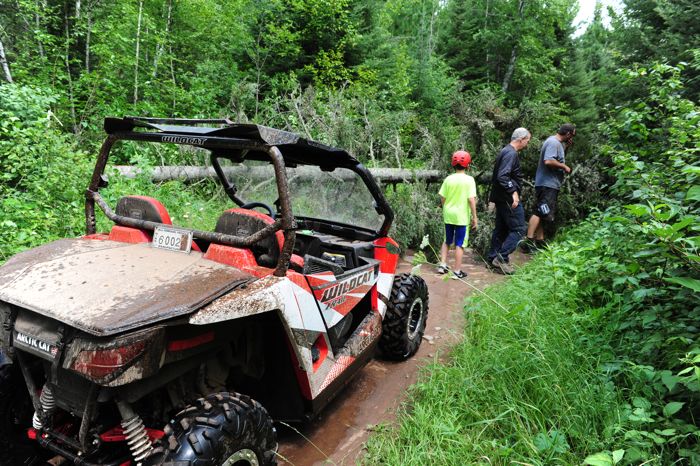 Only one tree barrier during the entire day (undoubtedly from the storm that came through a few hours prior to our arrival). A little detour through the bush and we were on our way. Best part of the day #34: Seeing Jace’s smile and hearing him howl with laughter as they busted through water puddles at 20 mph. 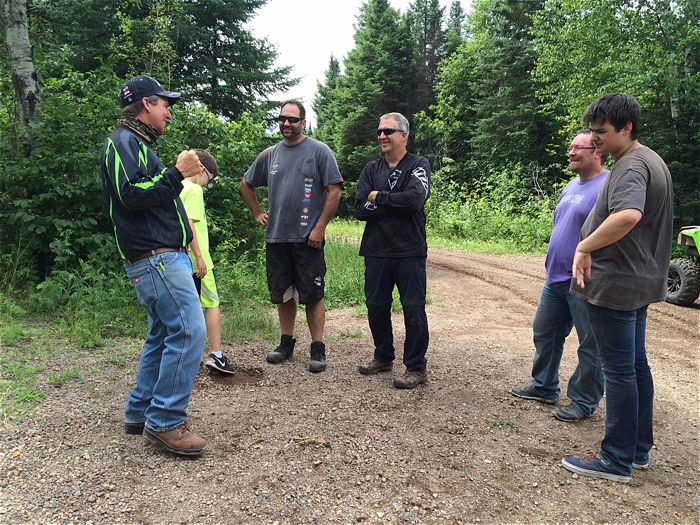 Best part of the day #24: Stopping every 20 minutes or so for whatever reason, then listening to the stories. 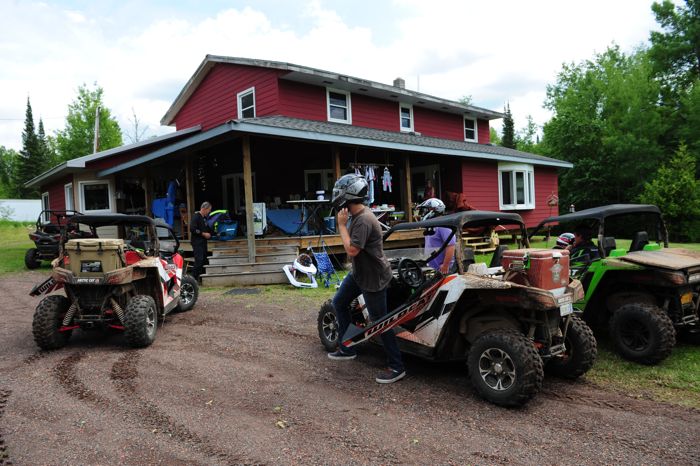 Best part of the day #41: Happening upon a garage sale at a house outside of Finland, Minn. 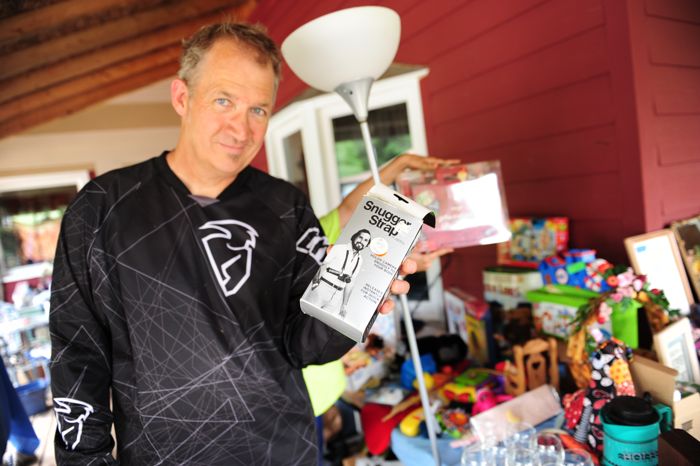 …where Pat found a sweet strap for his camera, along with some other treasures. 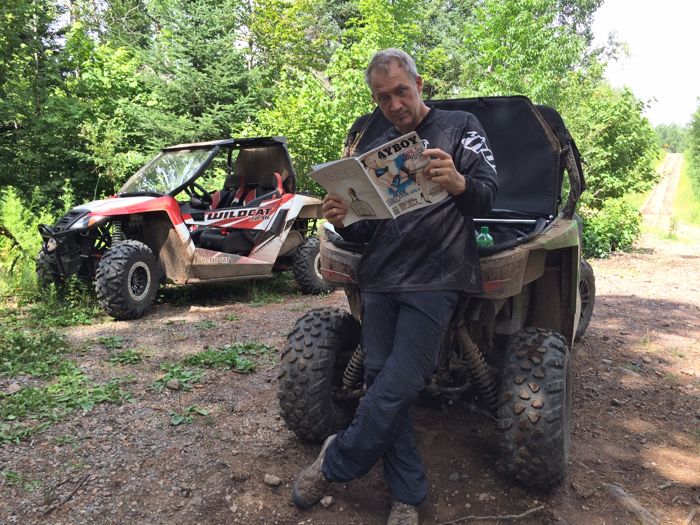 Best part of Pat’s day: Reading the outstanding journalism in his favorite magazine. 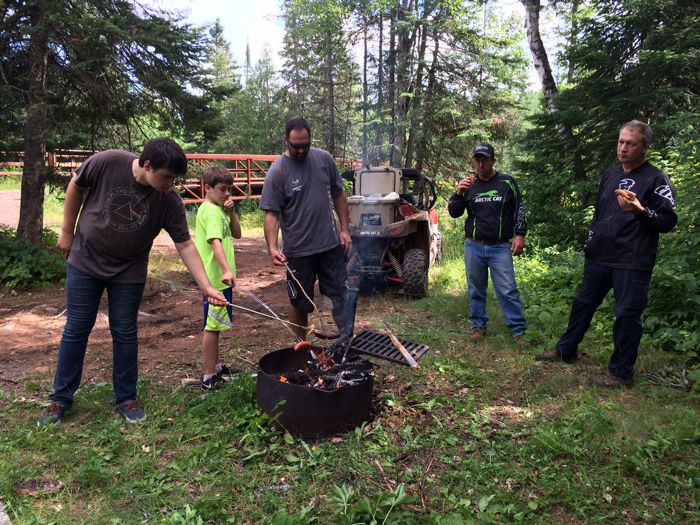 Best part of the day #17: Roasting dogs for a great lunch stop at one of the trailside shelters.

Actually, that was probably #1 on my list for the day.

It’s funny…I could have driven my truck to within 100 yards of this spot, then walked down the trail to have a cookout. Likewise, we could have ridden Wildcats on the exact same route but NOT stopped for a cookout.

Either the truck-lunch or nonstop-ride would have been fun and enjoyable in their own right. But when done TOGETHER, it was way more fun and memorable.

Which once again reminds me that the fun of off-roading, snowmobiling or any other activity, is doing it with people and occasionally stopping to smell the roses, er, burned dogs. 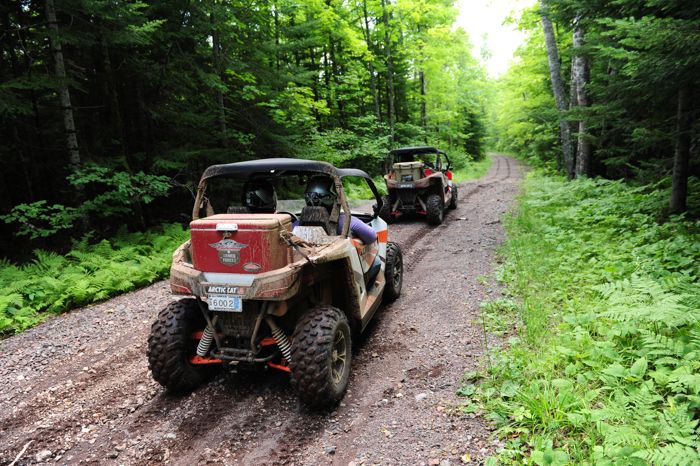 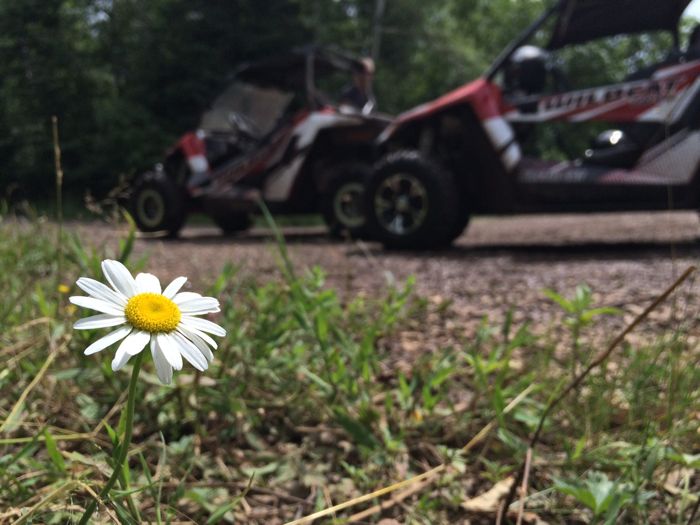