Inside (and Outside) Arctic Cat’s Mountain R&D Test Facility

Thief River Falls is the epicenter for Arctic Cat snowmobiles, of course. But for six months beginning each December, Island Park is the company’s annex for mountain the testing and calibration and calibration of its mountain sleds.

There, in a non-descript building on the edge of town, a crew of four spends their days riding the backcountry of the Centennial Mountains testing, evaluating and helping to improve current and future Arctic Cat M sleds.

Joining them on a weekly basis are engineers and technicians from TRF come to assist the Island Park crew as well as experience for themselves what new facts, directions and ideas are percolating from the days spent riding in this western riding haven.

The Island Park Mountain R&D Test Facility has been part of Arctic Cat’s engineering and test efforts since 1999. The facility and the people who staff it are a big part of the M series success story.

The Island Park test crew consists of (L-to-R) Robbie Steinmann, Shay Smith, Todd Tupper and Kellen Ballard. Each is an expert/pro level rider who is equally adept at tuning particular elements of a machine.

Smith is the shop foreman and senior member of the crew, having worked there for 8 years. Smith can do it all…ride like a madman, evaluate, engineer and wear a handlebar mustache that’s truly badazz.

Tupper is a top hill climb racer who has to the Island Park facility for 8 years and worked there for the past four. Tupper’s primo expertise is suspension calibration, but he’s an ace on all aspects of evaluation and engineering.

Steinmann has worked at the Island Park facility for 3 years

Ballard is the newest crew member, having been working at the Island Park facility for the past two years. He also competes in the RMSHA circuit.

In addition to these four, Al Shimpa offices out the facility in his role as Team Arctic Hillclimb Coordinator.

With the Centennial Mountains just a few squeezes of the throttle away from the shop, the Island Park facility is an ideal location for the Mountain Field Test program. There’s good riding here from December through March, with elevations that range from 6,000 to 9,000 feet, it’s ideal for calibrating engine management systems and clutching for most mountain conditions (note: Arctic Cat also tests and calibrates at higher elevations in Colorado).

In the shop portion of the facility there’s room for multiple sleds. Another area includes a small fabrication shop with a mill, lathe and plasma cutter, plus there’s an office area with the requisite telecommunications that connect with Arctic Cat and the outside world.

While the four test riders/engineers are the mainstays of the facility, there’s also a steady stream of Arctic Cat engineers and personnel who flow in and out. Oftentimes it’s for pure engineering purposes and other times it’s to prepare sleds for certain event. Many of the sleds in these photos were being prepped for the snowmobile media test sessions that occurred last Feb.-March.

One of the many tests taking place on this particular day was comparing new clutch calibrations between two M800s. Ballard swaps the cam on the driven and, a few minutes later, will be riding the sled through feet of powder. Pretty cool.

There’s a lot of collaboration that occurs here, as the riders help work on each other’s machines so that they can go riding together (for safety reasons). 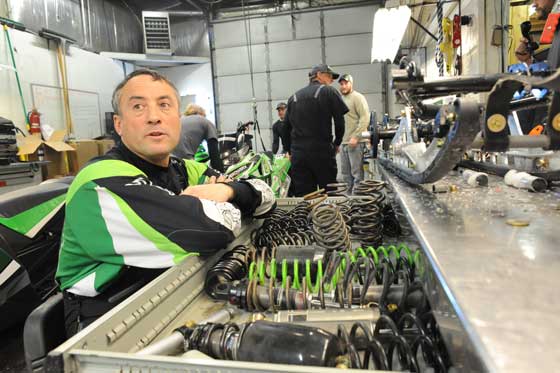 A well-stocked supply of parts is available, including shock springs for Tupper to choose from.

Troy Halvorson is now the Engineering Team Leader for Mountain and select XF models. While he’s based out of Thief River Falls, he spends a lot of time at the Island Park facility.

As the lead shock/suspension person for Arctic Cat, Jeff Olson is another TRF engineer who spends time in Island Park. At this moment Olson was revalving shocks in the never-ending effort to optimize suspension calibration on a machine.

Gary Homme is an engineer who spends most of his time in TRF, yet logs a few trips to Island Park (and other remote locations) each year.

There’s a buzz of activity that defines the atmosphere of this place. The pace, or rhythm, is of constant movement, whether it’s working on sleds or testing them.

Indeed, riding and evaluation snowmobiles it the principal reason the Island Park facility exists. The backyard, if you will, is one of the nicest snowmobile playgrounds in North America, with every condition you could want: meadows, backcountry, gnarly cornices and yes, even trails (hundreds of miles of them actually).

On this particular day the group swelled with extra engineers and a few marketing people.

Halfway through the day, a stop at the Elk Lake Resort for lunch presented a sweet photo op.

It’s common for these guys to stop and discuss what they’re seeing and feeling on the sleds, exchange machines and then repeat.

Back at the shop, Ballard (L) and Steinmann (R) talk with engineer Brent “Bart” Magner. The constant exchange of information informs the decisions Arctic Cat makes on every single component of each machine.

Indeed, the healthy exchange of opinions and ideas from their creative minds is a ritual that serves as the launch pad for current and future products.