Inside the Fox Factory Midwest Center 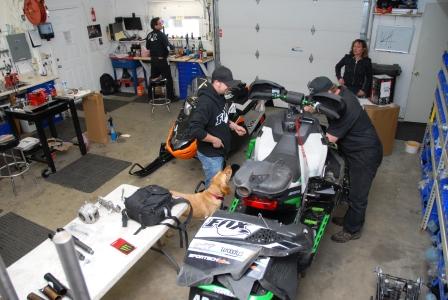 Just south of Brainerd, Minn., a stone’s throw from the Mississippi River is the Fox Shox Midwest Service Center. While the MSC is technically a branch of the California-based Fox, it’s ground zero for much of their snowmobile shock operations, particularly racing, as well as ATV racing.

It is the Fox Factory annex, located in the heart of snowmobile country. 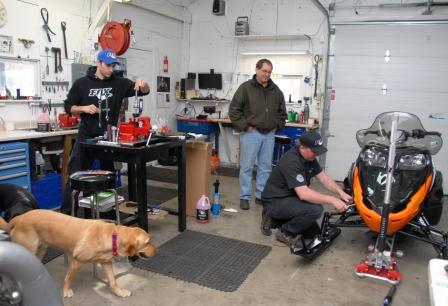 I spent a half-day here recently, deftly leveraging my friendship with these guys to get an EVOL Upgrade Kit done in-person, on my Arctic Cat F8 LXR. First impressions of this upgrade are excellent, but with only 150 miles on the sled since the upgrade, I need more seat time before I throw down an in-depth ride report.

So for now I simply want to share some background on the Fox MSC, the people there, and what they do on a weekly basis.

Not too fancy, the Fox MSC is by my estimation a 40 x 30 shop with three shock rebuilding benches, a well-stocked parts inventory, Bridgeport lathe and mill and a shipping/receiving area.

The shop element of this place is cool, but the critical resource here is the people. 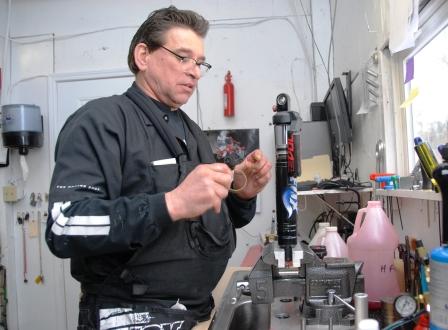 There’s Randy Karpik (above), whose amazing and varied career began in 1977 and included stints with Ski-Doo; Brother Gerard’s historic race career; founding FAST; Yamaha factory team; Blade Snowmobiles and literally dozens of projects for various OEMs and aftermarket. Randy has been around the block a dozen or so times and he definitely knows the neighborhood. 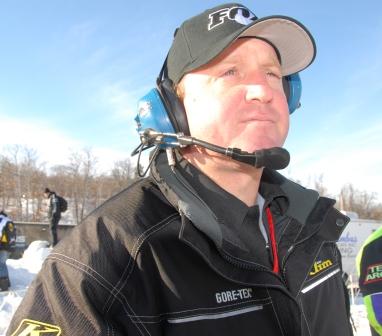 Shock techs include Ryan Greening, who has won every USCC Semi Pro 600 class this season, and who helps manage Fox’s ATV race support in the summer; and Jim Blunt, who was not in the shop during my visit.

Handling the administration at the MSC is Denise Strobel, who has the serious misfortune of being the sister of Randy, Gerard and Dave Karpik, but has somehow recovered from that horror and is now married to Rick. Shame on me for not getting a photo of Denise while at Fox. Sorry Denise.

This core group services Fox Shox for snowmobile riders, plus handles a racing program whose involvement is both deep and vast, particularly for Arctic Cat. 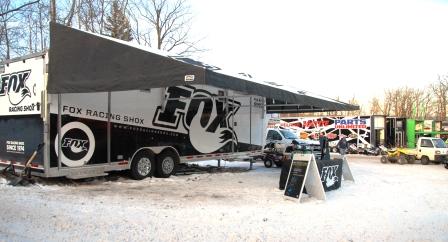 If there’s a pro snocrosser or USCC cross-country racer using something other than Fox EVOL X shocks, I’m unaware of it, as that shock option has all but taken over the front suspensions of Cat racers during the past few years. 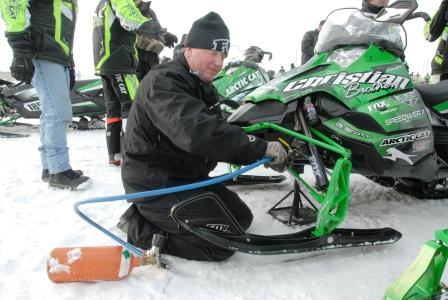 The Fox/MSC crew works with these racers and team every weekend, helping sort through calibration options for various tracks, conditions and individual needs. 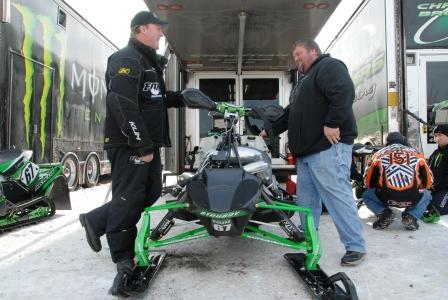 Walk through the pits at any race and you’ll find Rick inside the Arctic Cat trailers, asking questions, providing feedback and helping to get the sleds dialied-in.

There’s a strong reciprocal relationship between some racers and Fox.

“We get a lot of input on our snocross calibration from Kirk Hibbert and Russ Ebert,” says Rick. “And the same exchange happens with Brian Dick for cross-country racing.”

Do racers change shock calibration throughout the season?

“Generally we determine the valving in the beginning of the season,” says Rick, “But we/they are constantly fine-tuning the air pressure and the compression/rebound clickers. It’s interesting: For the most part, racers go progressively stiffer as the season progresses. The reason, I believe, is that they get their bodies and minds to go progressively faster and harder through the bumps with each successive race.” 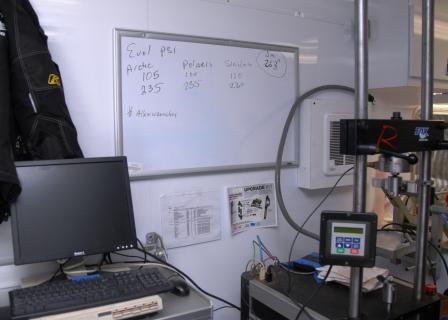 While racing is all about branding for Fox, it also produces oodles of calibration and shock knowledge for the MSC staff that then get’s applied to consumer shock needs.

Indeed, during the week the Fox MSC crew is busy servicing Fox shocks for snowmobilers and ATV riders all over North America. From oil/nitrogen servicing to Burandt and EVOL Upgrade kits to custom calibration work, the MSC does it all and it does it quickly. 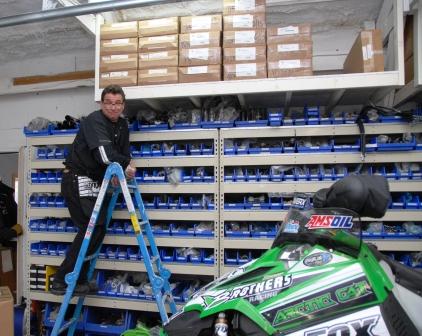 “We can service any Fox shock used on Arctic Cats going back to the early 1990s,” says Rick. “We don’t sell complete shocks from that era, but we can service them.”

The turn-around for shock servicing at the MSC is two days. 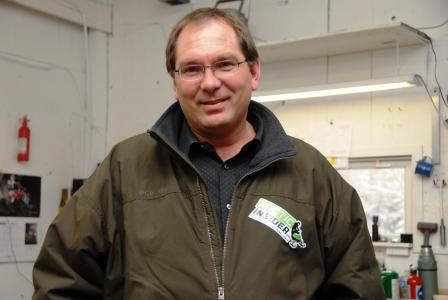 Once a Fox rider, always a factory rider? Yep, as evidenced by former cross-country racing fastman (and Team Arctic racer for a short period) Eric Loge, who stopped by the MSC for some shock work and to display his favorite Website’s decal on his jacket. Thanks Eric!

How does the Fox MSC – which is essentially the Fox Factory – compare with authorized Fox shock professionals and dealers?

“When it comes to service and doing jobs like EVOL Upgrades, our partners like Speedwerx, Carver Performance, many dealers and other aftermarket companies do the exact same work that we do,” says Rick. “They’ve received our training, plus have the same parts and expertise. They do excellent work.

“Where the MSC differs is that, because of our extensive racing and consumer calibration background, we offer special valving knowledge and expertise that many places can’t.” 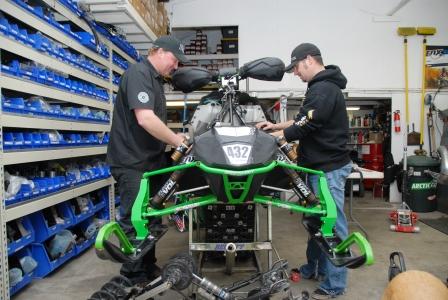 When one work day ends at Fox, another begins… the job of working on Ryan Greening’s USCC Semi Pro class-leading Sno Pro 600 race sled. Rick on the left, and Mike Japp on the right. Mike’s main gig is to work on the Factory Arctic Cat sleds of Kyle Pallin, Cody Thomsen and Dan Ebert. He helps on Greening’s sled in all of his spare time…LOL. These guys literally live and breathe snowmobiles, most of them Arctic Cat, and it’s another reason they’re such shock professionals. 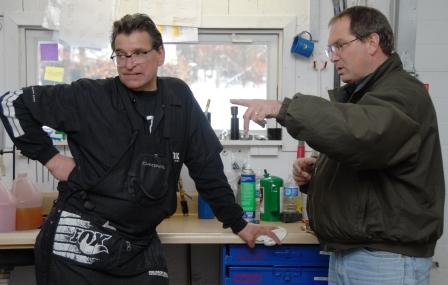 Ditto for untold number of conversations with racers, former-racers-turned-trail-riders (like Loge) and other sledders.

The Fox crew also has a strong vendor relationship with Arctic Cat, as either Fox EVOL or Zero Pro shocks come stock on the majority of the High Performance and Mountain sleds. This relationship means that Fox has works with Cat on current and future snowmobile projects, which again plays into their expertise.

“Fox and Arctic Cat have been partners going back to the 1990 EXT Special,” says Rick. “Arctic Cat’s suspension engineers are very, very good at what they do. The company’s commitment to racing and the talent of people like Kirk Hibbert, Brian Dick and Russ Ebert make a huge difference in the quality how well the shock package works on their snowmobiles. On race sleds, and consumer sleds.”