Interview: Catching Up With VP of Arctic Cat, Troy Halvorson

It’s been nearly 5 months since Troy Halvorson took over the role of Vice President of Arctic Cat, and it was nice to catch up with someone I worked closely with for 16 years. For those of you who don’t know Troy, he may have a VP title, but that doesn’t mean he’s a desk jockey. His career and passion has been modeled around performance snowmobiles and powersport products, and he’s left a trail of success no matter his direction. I’m happy to see him in his current role and I can tell you firsthand, he’s wicked fast on a snowmobile and rips on a motocross bike. Included below is a bit of our conversation centered around Snowmageddon and what effects the past year of COVID have had on the industry. 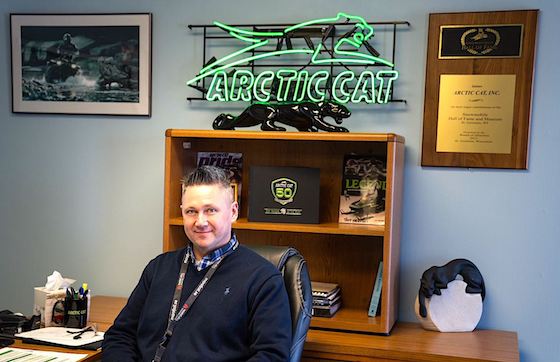 AI: Troy, thanks for taking the time to talk with myself and those following ArcticInsider. Tell me about your current position, and for those who don’t know you, give us your elevator pitch on your work history at Arctic Cat.

Troy: I started in April of 1997 as a Product Engineer for the ZRT and Thundercat triple-cylinder line of snowmobiles. I switched over to the ZR’s in 1999 and worked for Kirk Hibbert for a while. In 2003, Roger Skime gave me the opportunity to lead the race sled development team. After a couple years, Roger added all the High-Performance snowmobiles to my plate.

Shortly after the launch of the 2012 ProCross line of snowmobiles, I was asked to move over to the Mountain sled division where I had the opportunity to lead the mountain development team. That was a great experience and very satisfying to see all the changes the team made to make the mountain sled work the way it needed to.

From there, I stepped away from engineering slightly, to take on the role of Snowmobile Product Manager, and from there, progressed to Director of Snowmobile Engineering. After a few years in that role, I moved to Director of Operations, and it marked the first time in my career I was involved in both Snow and Off-Road, which helped me learn a lot about the dirt product. After Craig Kennedy moved on, I was asked to fill the position of interim Vice President of Arctic Cat.

AI: I’ve been curious about the state of the powersports industry and how the past year of COVID has affected it, whether positively or negatively. I know sales and demand are up, but that has also triggered some supply issues. What can you tell us?

Troy:  As you know a lot has happened over the last year.  When the pandemic started, everyone was concerned how it would affect our industry. I don’t think anyone expected the demand to go up like it did. (laughs) Because there were so many events and activities cancelled leaving people with more free time, it added focus to the outdoor activities they could do. And that led them to buy off-road products, and then snowmobiles. Personally, I can’t think of a better way to enjoy the outdoors. With regard to part delivery, it’s been challenging.  Standard lead times have increased due to a variety of reasons, so we must plan accordingly.

AI: Since we are talking about Supply and Demand, I’m hearing reports from dealers that units like the ZR120 and 200s are sold out already during the Snowmageddon spring order period. Is that true? Any other units?

Troy:  Yes. We’ve communicated to dealers we are “sold out” of those models. We are getting close on some others as well.

AI: Some reading, are probably thinking, how can an early order only program like Snowmageddon be sold out? Can’t you just make more?

Troy:  That goes back to what I said about lead times. We enter units in the schedule based on a forecast well before we release the new model line-up. If we didn’t, there would be no way to build product based on when the customer wants it.  In the past, we’ve been able to adjust our plans up or down in the later months of the production schedule, but with lead times getting so much longer, it makes late adjustments much more difficult.

AI: If build numbers are limited because of parts availability, are other OEMs or industries in the same position?

Troy:  I can’t speak for other OEM’s, but I know other industries must be facing the same issues as well, based on people I’ve talked to.

AI: Snowmageddon is great because you get your best deal of the year. And if I understand correctly, if you don’t order now, you may not get an Arctic Cat.  That said, will there be any in-season units available?

Troy:  We opened up select models for dealers to order in-season.  However, if we sell out of a particular model during Snowmageddon (like the ZR 120/200 or Thundercat) there won’t be any available. Consumers can see which models are available in season through the Arctic Cat website or by speaking with their local dealer. Again, there may be in-season units available, but the prices won’t be as low as they are during Snowmageddon. (Snowmageddon early order period ends for Arctic Cat April 30th)

AI: Shifting away from snow, can you tell us anything about the dirt side of the Arctic Cat business?  I think there are plenty of Arctic Cat followers excited to see some new dirt products. Will we see anything new soon?

Troy:  The Off-Road engineering team has been busy, and everyone can expect to see something new very soon.

AI: I’m excited to hear that Troy! Thanks again for taking the time to catch up.