No Ordinary Forklift: The Origins of Arctic Cat 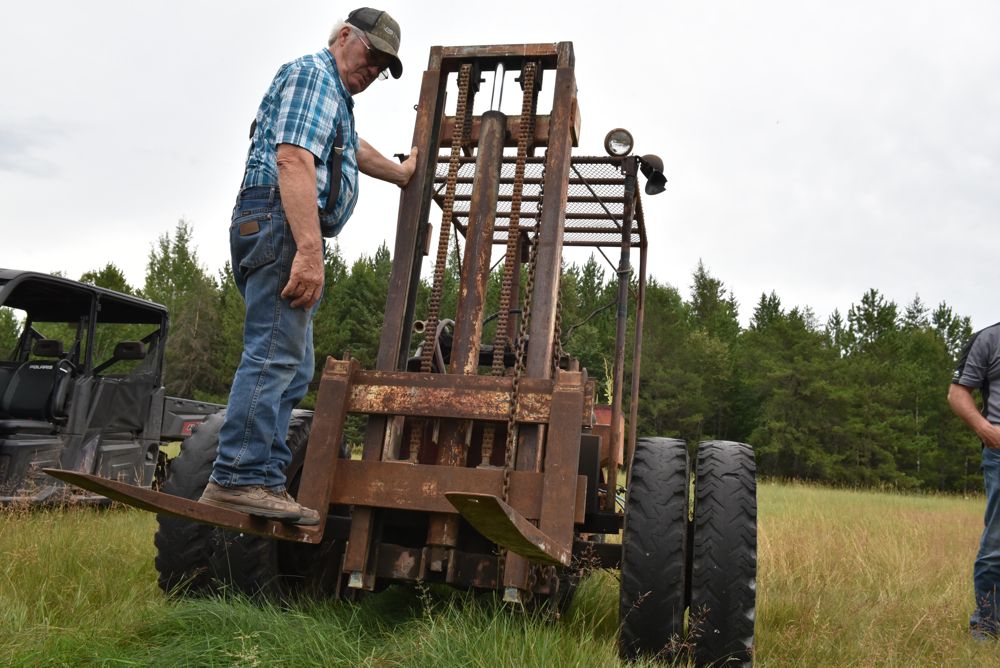 It isn’t every day that you see Arctic Cat legend Roger Skime standing atop a weathered old forklift.

But this no ordinary forklift.

Roger himself built it not long after he was hired to work at Arctic Enterprises in 1962. For several years it touched every single Arctic Cat snowmobile.

And like a surprising number of things sitting in fields and in barns in northwest Minnesota, this old forklift connects Polaris and Arctic Cat and the generations who helped build both companies.

To understand the connection, let’s start with a brief history lesson. 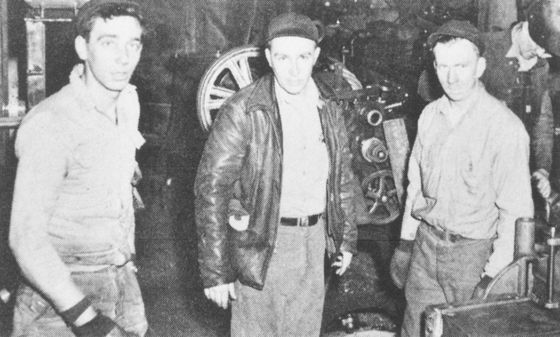 Polaris Industries was founded in Roseau, Minn., in the mid-1950s by brothers Allen (left) and Edgar Hetteen (middle), and David Johnson (right), three remarkable visionaries. The three had already worked together for many years, but it wasn’t until Johnson designed and built the first snowmobile that they branded the company “Polaris.”

That first snowmobile would set in motion a series of events that would build two companies, help create a new sport and give millions of people a reason to love winter. 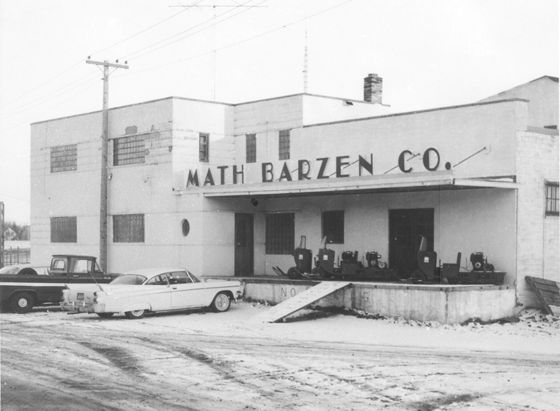 Five years after Johnson built that first Polaris snowmobile, Edgar pulled up stakes, left the company he helped found and headed 60 miles south to Thief River Falls, where he established his new company Polar Manufacturing in an unused grocery warehouse next to the river.

And in less than one year the first Polar snowmobiles emerged from the lower level of the old Barzen building. While the exact number is lost to history, it’s believed that roughly 30 Polar snowmobiles were produced that first model year. 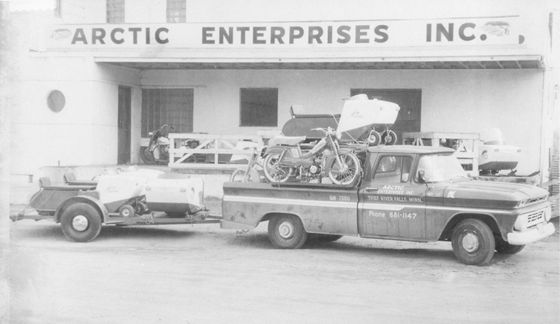 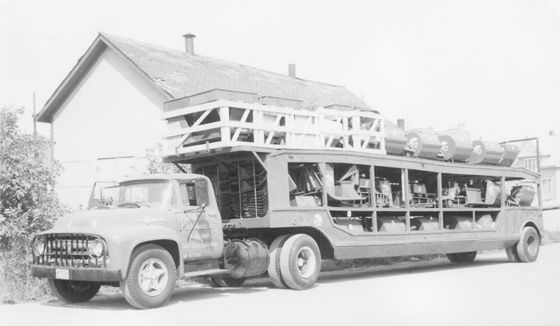 As the fledgling company concluded its second year of business, Edgar renamed it “Arctic Enterprises.” Its snowmobiles became “Arctic Cats.”

The good news for 1963 was that snowmobile production numbers crept upward. The bad news for the employees was that each one had to be lifted up a long ramp from the basement level of warehouse before they could be loaded on trucks. Those rear-engine Arctic Cats were damn heavy.

The company needed a forklift, but it didn’t have the money to buy one.

So a few of the employees, including a recently hired young man by the name of Roger Skime, fabricated one. 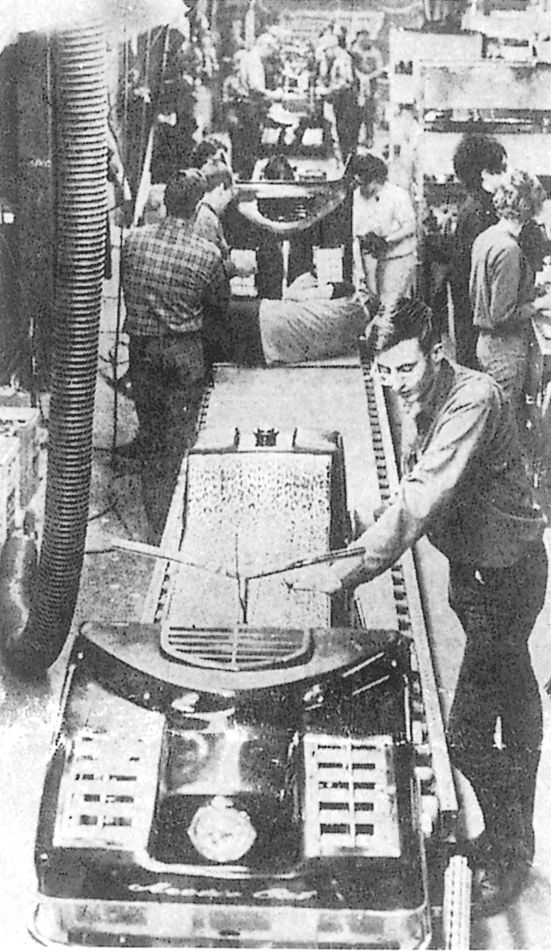 And for the next eight years, that custom forklift carried every Arctic Cat snowmobile off of the assembly line, up the ramp and onto semi trucks.

Every red Arctic Cat. Every white Arctic Cat. And, for the first few years, a bunch of black Arctic Cat snowmobiles.

The forklift was finally put to pasture around 1970-71, when the company relocated to a newly built facility on the edge of Thief River Falls.

At some point in the 1970s, Edgar brought the forklift to his farmstead near Roseau, where he occasionally used it to move the various inventions he built at his shop there. And once he was done using it, it sat outside the barn like any old piece of tired, old equipment.

Fast forward 40 or so years. 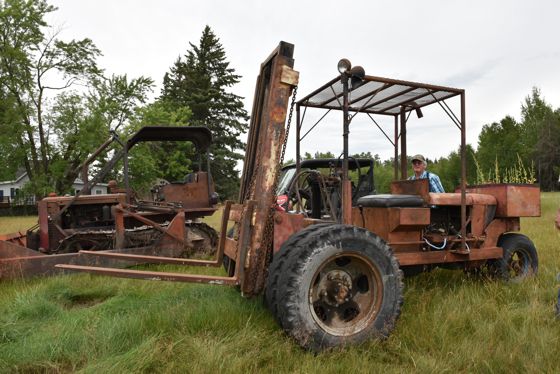 A “For Sale” post for “the original forklift used at Arctic Enterprises” on an online forum caught the eye of Tom Rowland, an Arctic Cat dealer (and collector) from Ogilvie, Minn.

Over the years Tom has amassed a wonderful collection of Arctic Cat machines at his dealership Thomas Sno Sports. While the prospect of owning a forklift formerly used at Arctic Cat wouldn’t capture the imagination of most sane people, it did exactly that for Tom. Because, Tom.

For sure Tom was interested because it was an Arctic Cat forklift, so to speak. But he was also interested because the person selling the forklift was Aaron Johnson, youngest son of David, the inventor of the first Polaris snowmobile.  Tom is a student of snowmobile history, and he knows that David Johnson is important and meaningful to that company much like Roger Skime is to Arctic Cat.

A plan was hatched, phone calls were made and in late July I found myself a passenger in Tom’s truck, along with Kale Wainer, as we headed north.

Six hours, 5 boxes of Mike & Ikes, several cups of coffee, three bottles of Pepsi and one package of Twizzlers later, we arrived at Skime Ranch, where we plucked Roger from the middle of feeding cows, then drove the final few miles to Johnson’s place. 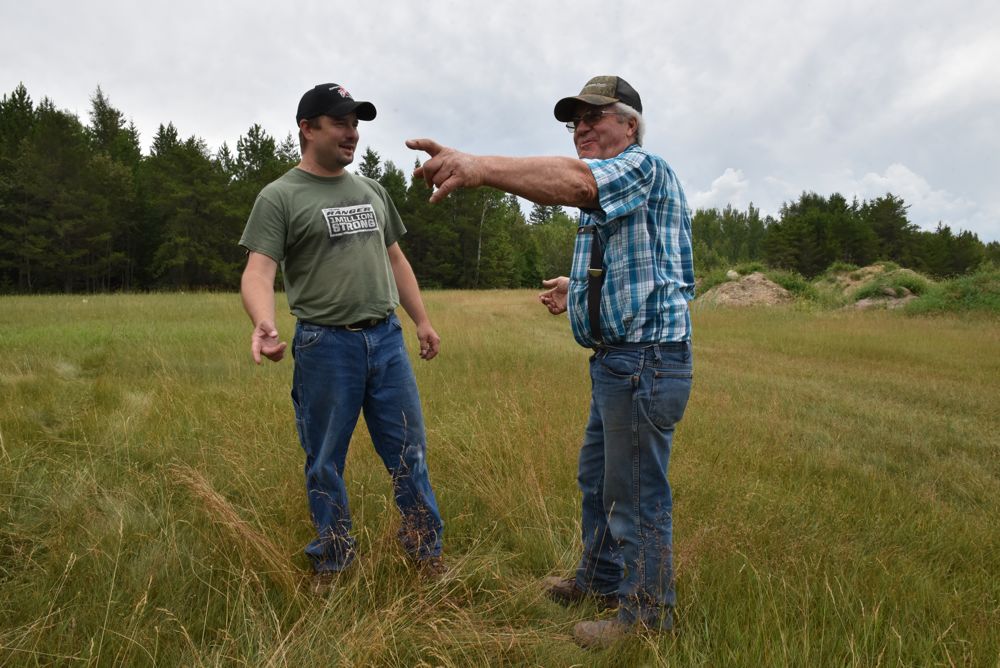 When we popped out of the truck, Roger (right) and Aaron immediately embraced like old friends.

The Skime/Johnson bond goes back decades, to the very beginning of Arctic Cat and Polaris. Theirs is a friendship that ignores the brand label on the jackets.

Roger and David Johnson might have worked at companies that competed with one another, but they were also true friends. The kind of friends who know each other’s kids and grandkids. Who sit together at weddings and funerals. Who share the forging of character that comes with suffering through tough times while trying to build a company and a sport.

So when Roger sees Aaron (who works fabricating future Polaris vehicles), he sees a true and cherished friend… 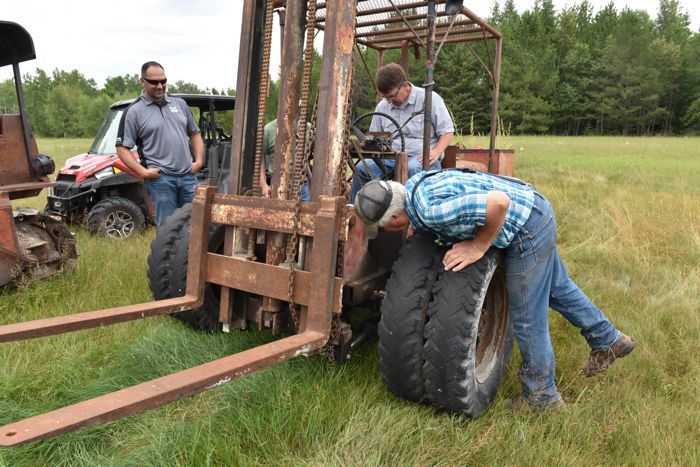 …and then (on this day) he saw the old forklift! 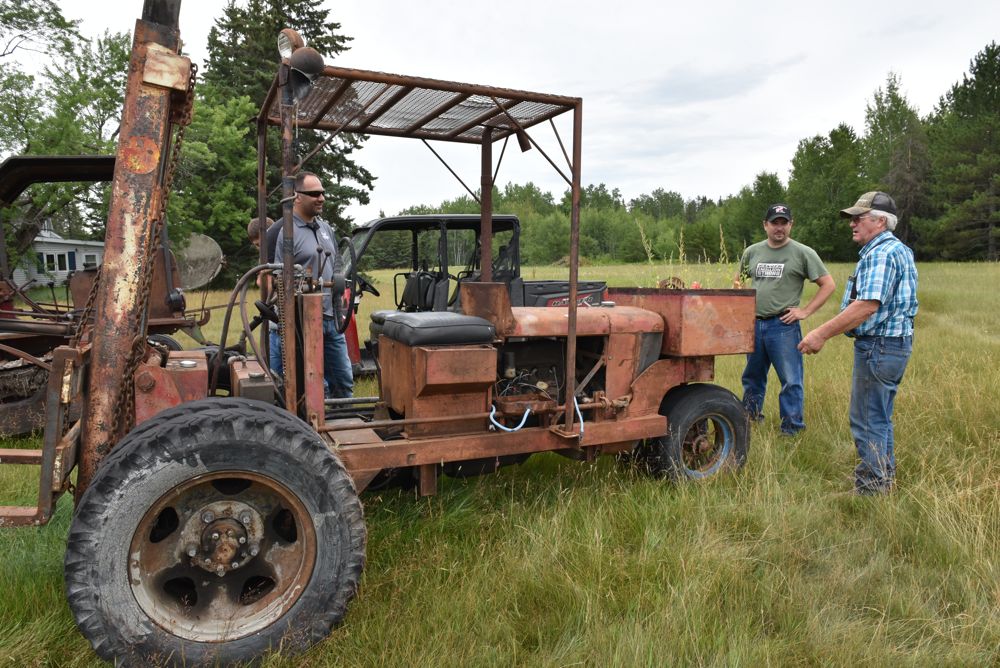 And then just like that, the stories started flying as fast as Roger could get the words out.

He vividly remembered building it. 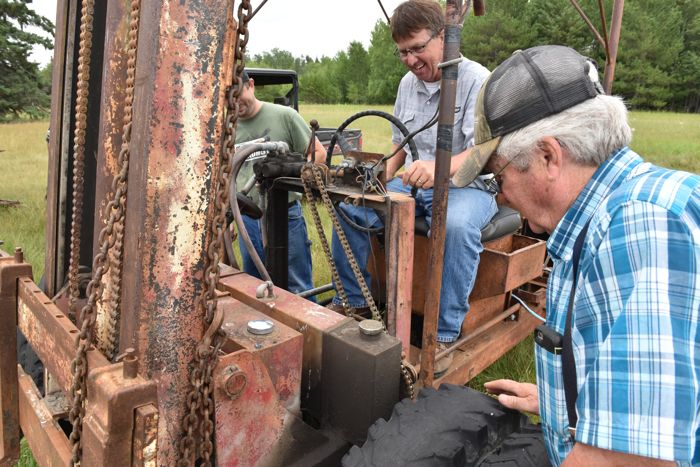 The front end is from an Allis Chalmers tractor, the engine and rear end from a Chevy truck. The fuel and oil tanks are repurposed fuel tanks from Model 500s, as is the seat base. Though it’s weathered and faded, it’s still wears the classic Polar/Arctic Cat red of the rear-engine snowmobile era. 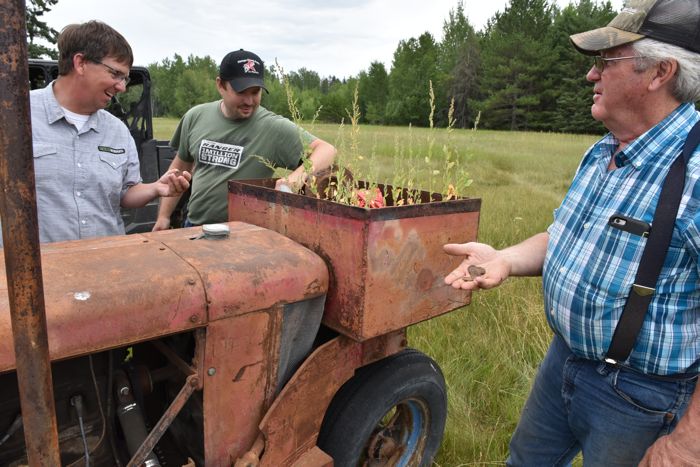 That box with sprouting weeds was used for ballast. We shared a huge laugh when Roger pulled out some of the Polar metal stampings that were originally dumped into it some 56 years ago. 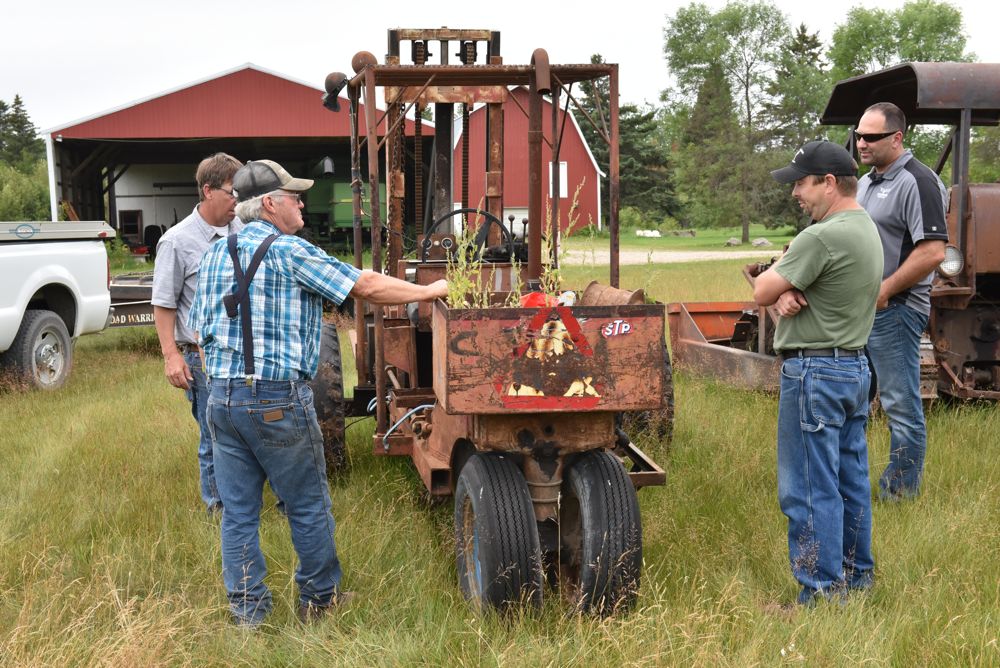 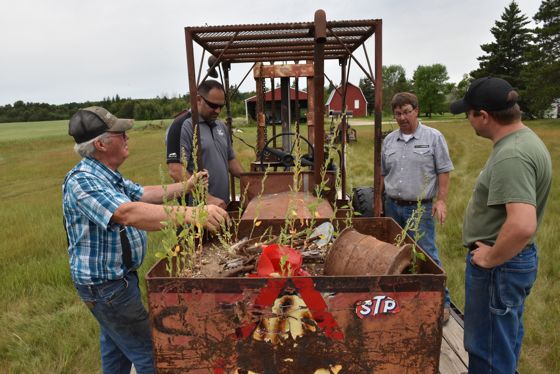 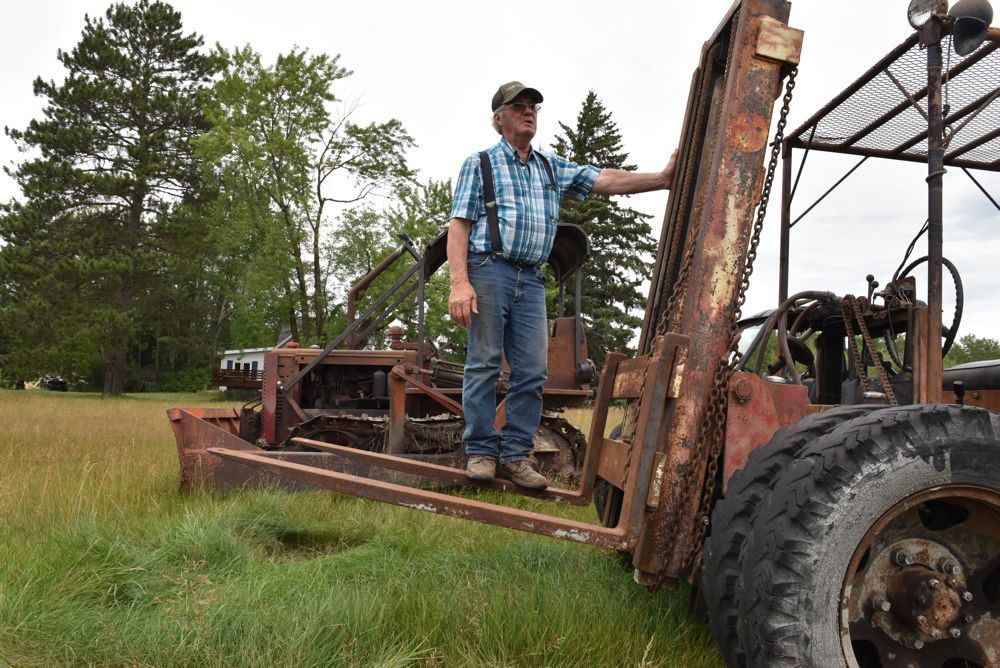 I can’t begin to tell you how happy these photos of Roger standing on the forklift make me. 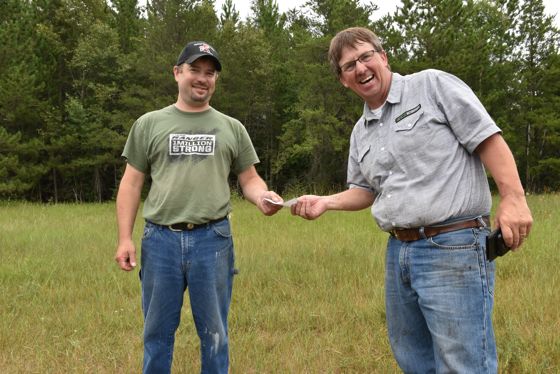 If Tom (above, right) had any doubts beforehand about buying the forklift, the stories Roger told about building red Arctic Cats and its constant use completely erased them. History has a way of connecting people with things. Tom presented a check to Aaron. Done deal! 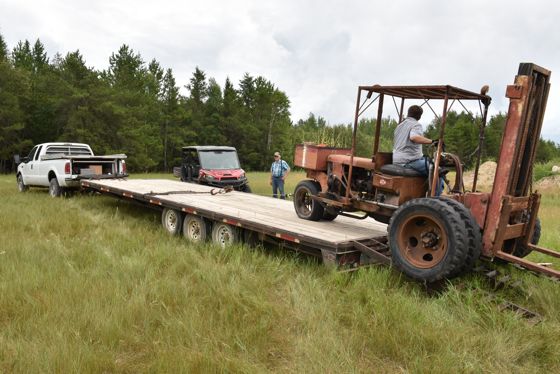 Then the beast was loaded onto a trailer for the drive back to its new home in Ogilvie, where it will be made mechanically operational (but kept original).

But some of the best stories were yet to be told. 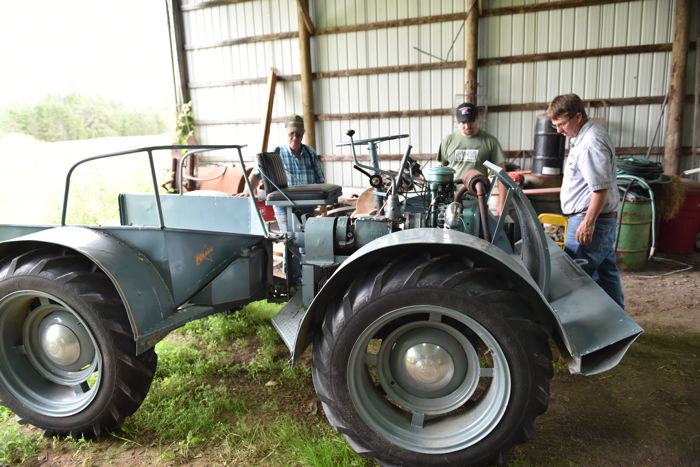 A former airplane hanger housed another incredible machine: this “swamp buggy” that David Johnson built in 1958 for the Minnesota Dept. of Natural Resources, for getting through swamps and lowlands to access remote areas in northern Minnesota.

It might look primitive by today’s standards, but Johnson’s 60-year old creation was a visionary foreshadowing of what Polaris would eventually become. 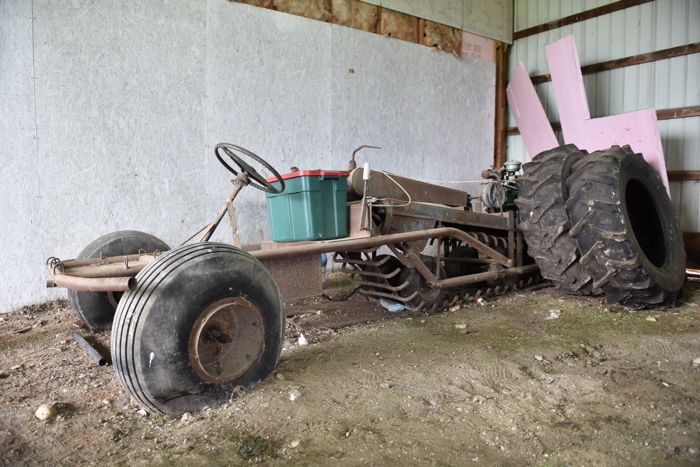 Another creation of David’s, this steel tracked machine they called the “potato digger” hauled the family’s gear to their cabin and blazed trails across frozen Lake of the Woods for decades. 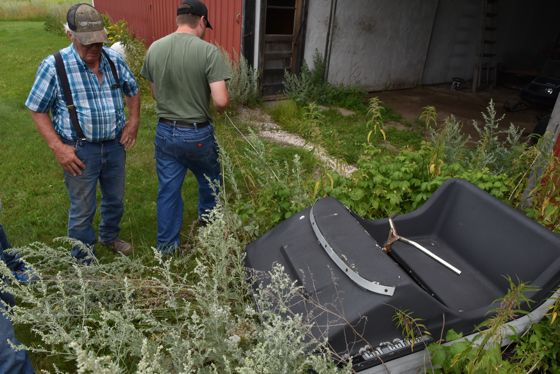 This Cat Cutter is a leftover of Edgar’s, who converted it to be a rear-engine, propeller-driven machine. No, I’m not kidding. 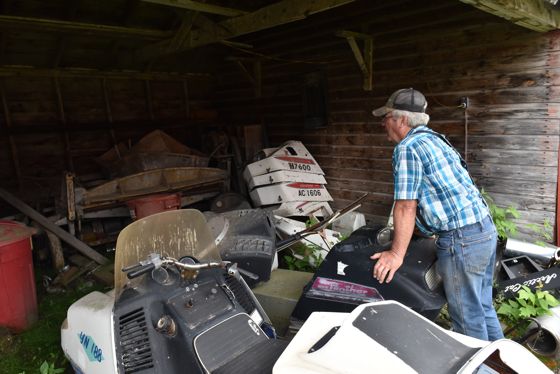 In a nearby shed, among some of the machines that Aaron has accumulated while building his own collection, Roger spied an original metal shear used at Polaris, and later at Arctic Enterprises. 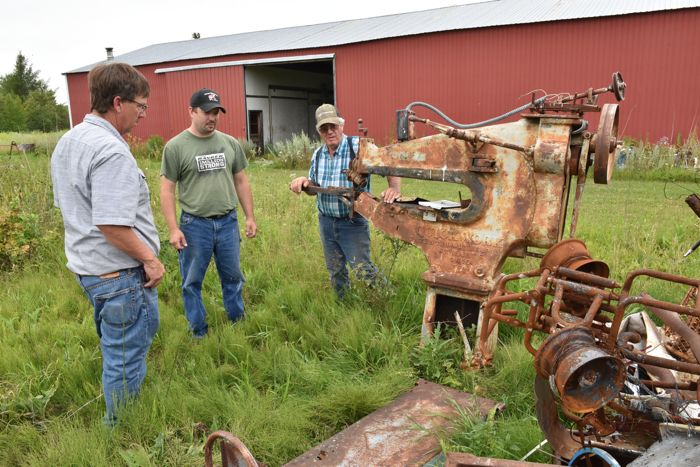 Next to the shed stood this bead roller that was also used at Polaris and later at Arctic, where it was rolled the edges of side panels on Arctic Cat Model 100 snowmobiles.

Like the shear, David Johnson gave the bead roller to Edgar when the latter started Polar/Arctic Enterprises.

When Roger saw these machines he shared something I’d never heard before: In the early days of Polar/Arctic Enterprises, when the company was behind schedule and struggling to meet production deadlines, David Johnson and Allen Hetteen sent Polaris employees to TRF to help them build components like gas tanks and clutches, and to assemble snowmobiles.

Let that sink in for a moment.

The president and leadership at Polaris sent their own employees to Arctic Cat, their competitor, to help build snowmobiles in order to meet production schedules.

There is something profound in that gesture that gives me pause and puts a lump in my throat.

I like to tease the other snowmobile brands, but the truth is I have tremendous respect for them. Especially for Polaris, because theirs is a story that is SO similar to Arctic Cat:

Polaris has also weathered some really, really lean times during its history which, like Arctic Cat, makes their success all the more impressive. 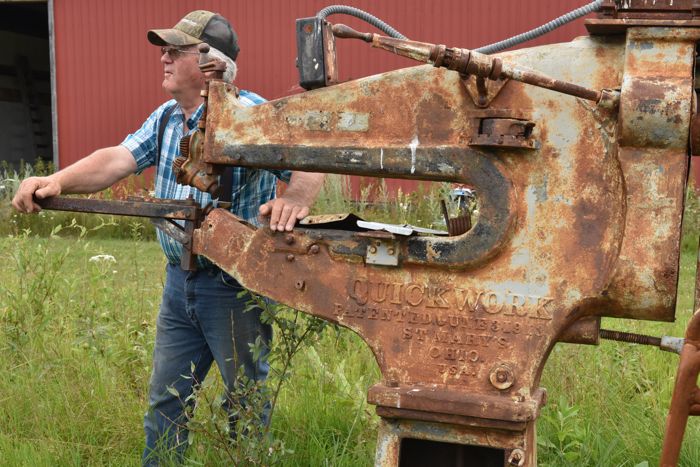 We’re at a turning point in the history of snowmobiling. Until very recently, most of the people who founded the sport/industry were still alive.

David Johnson passed away less than two years ago. Edgar Hetteen passed in 2011.

Roger is still very much here (and still helping bring future Arctic Cat snowmobiles to life). And so too are a handful of others from Polaris, Ski-Doo, Yamaha and other brands.

Their stories are crucial to understanding where the sport of snowmobiling came from, its struggles, its successes and lessons for tomorrow.

But the last of these original pioneers won’t be around forever. 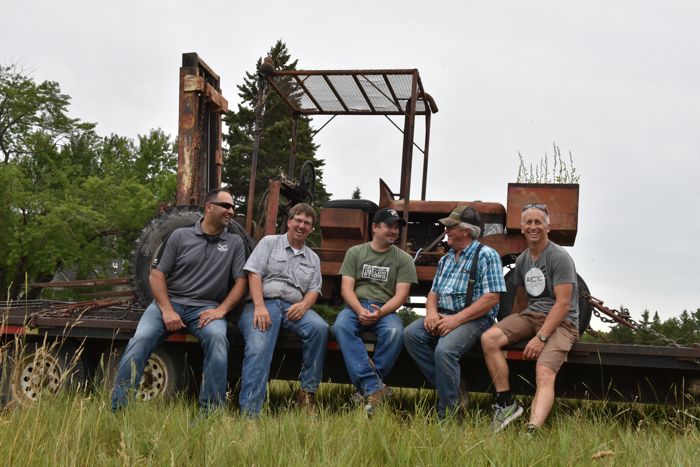 After spending a couple hours listening to one of the originals talk about the old times with Edgar and David, as well as hearing Aaron’s own family stories, I was reminded about something that Edgar once said:

My goodness, how lucky we are today for the dedication those pioneers had so many years ago!

I want to thank Aaron Johnson for being a gracious host and sharing his family’s history with us.

Thanks to Tom Rowland for having endless passion and an infinite desire for adventure.

And special thanks to those who were so dedicated to the little beast we all still dream about: David, Edgar, Allen and Roger.