REVIVED! The tale of a 1973 Arctic Cat Snowblower

Ive mentioned before I receive some pretty cool emails, including those of you who ask if Id like to purchase something Arctic Cat related. 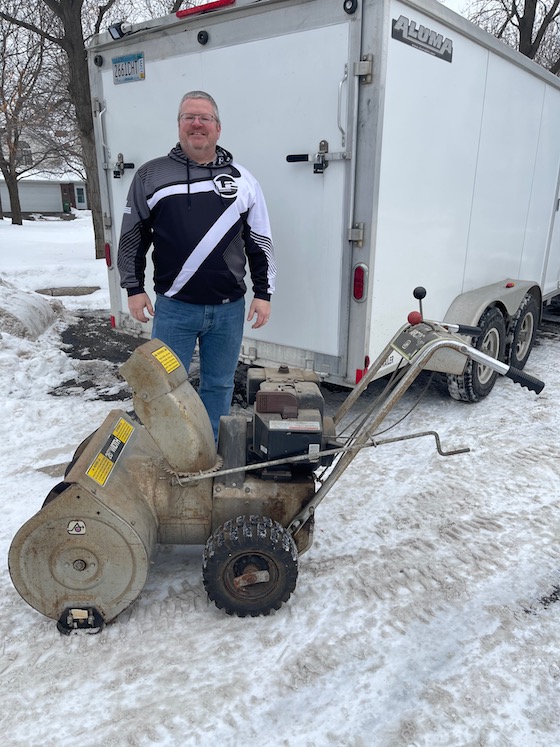 This was the case when longtime ArcticInsider reader, Jeff, contacted me to see if Id like to buy a 1973 Arctic Cat Snowblower from him to compliment a GrassCat riding mower I had rehabbed last summer.

Jeff relayed the story of his father attending the local 9F Hunting Club annual Cadillac Party in the early 70s. Tickets were sold at the club event for $100 per person to enjoy food and beverages and at evenings close, the club would raffle off a brand new Cadillac as a Grand Prize. Jeff’s parents struck out on the new Cadillac, but they did win their $200 entry back as a Second Prize. 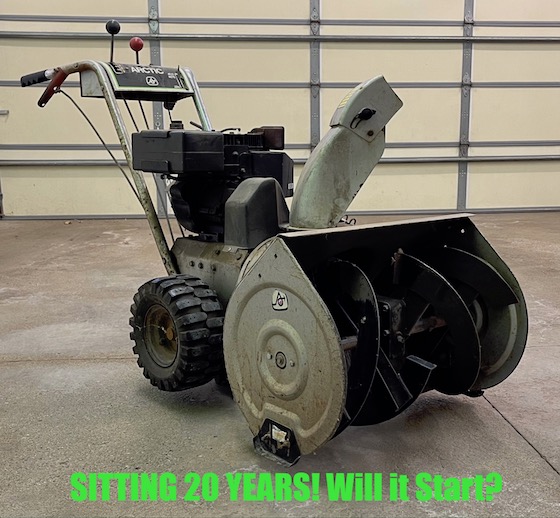 So here we are present day and Jeff relayed the story of his dad’s love and use of this snowblower for many years, but then it was pushed into the corner of the barn at some point and forgotten. Sadly, Jeff’s dad passed not long ago and the blower continued to sit.

To be honest, I didnt need this blower in my life due to a severe lack of storage space, but Im a sucker for resurrecting vintage Arctic Cat stuff, so Jeff and I settled on a price and I told him Id clean it up to its somewhat former glory and get it running again. 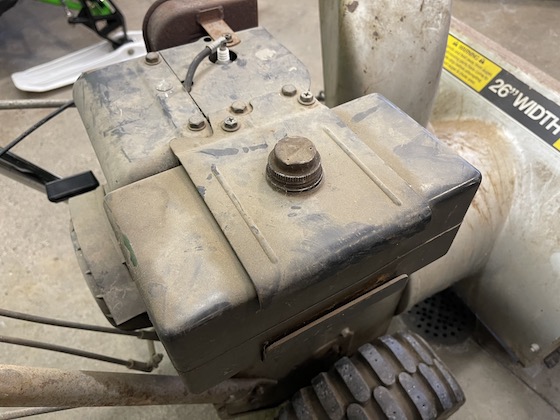 From an outward appearance, the blower was dirty from sitting, but after opening the gas cap, I was happy to see it was stored without gas in the tank.

Under this cover lurked the carburetor. I was hoping it was as clean as the gas tank. It kinda was, but after opening up the float bowl, there was plenty of green gnarly-ness from old gas.

These tires are pretty pimp. They have provisions for ice screws. I know these came with tire chains too. If anybody knows what that spinner is on the axle hub, Id sure like to be educated on it. There isnt one on the other side. 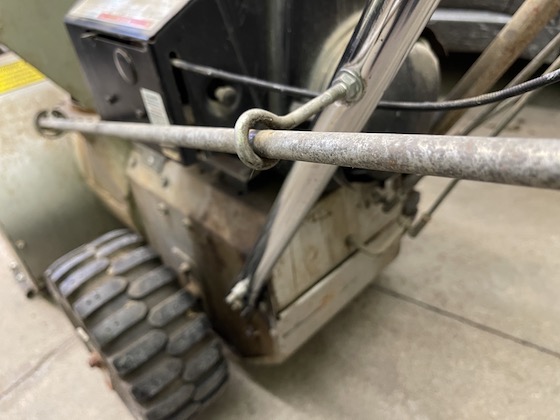 The Chute handle was pretty corroded, as were the chrome handlebars. Are they handlebars? (Whatever. I know they need 10 more inches of riser) 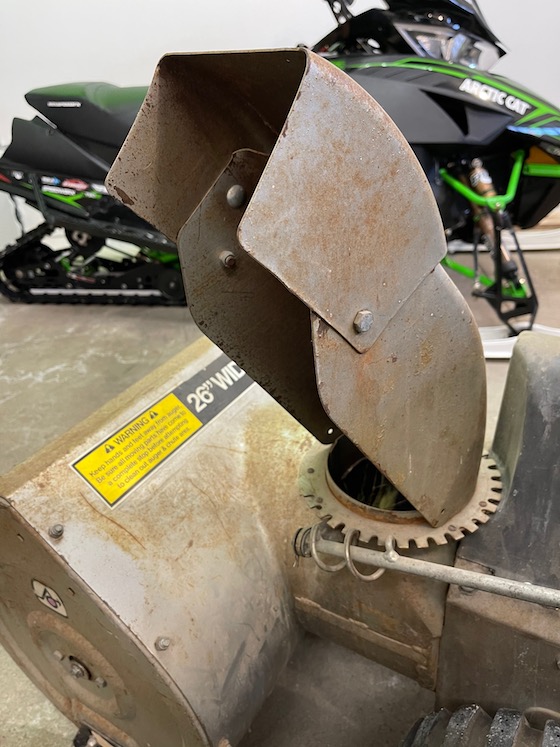 One turn of the Chute handle was all you needed to hear to know the metal-to-metal contact surfaces were in desperate need of VeinerSchlidin. (Bohemian for grease)

50 Years ago we warned people to keep hands away from moving parts…now we have to warn them not to use Gorilla Glue as hair spray. (Sigh) 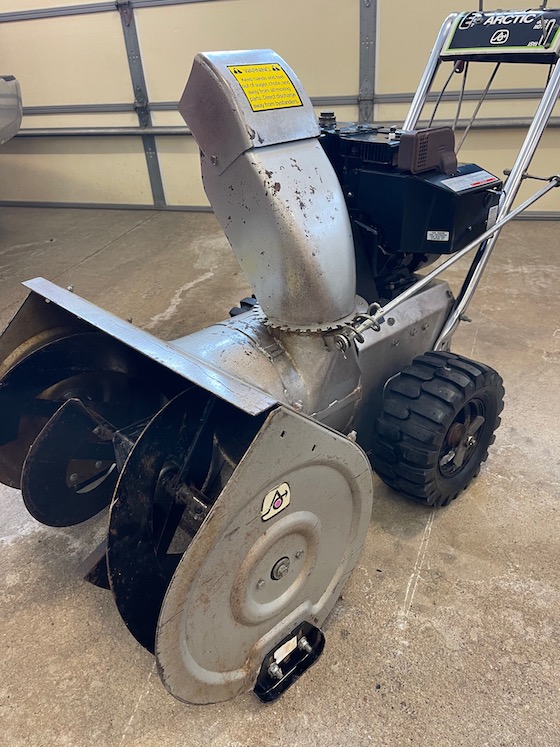 After a wash/degrease, most of the dirt build-up just rinsed off. I dont recommend this for painted surfaces, but I actually took some OOO steel wool and used it as a wax applicator pad and gave all the silver painted surfaces a once over. It got rid of some of the surface rust and actually brought back a bit of shine. 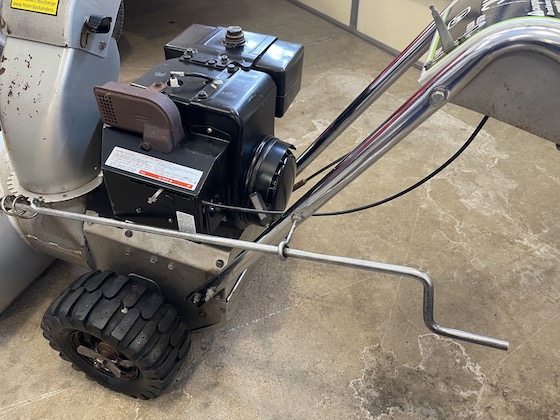 I took the wire wheel to the Chute handle and it cleaned up nicely. As did the handlebars which had some fairly heavy surface rust. Most times on chrome this old, you can take some OO steel wool, dip it in Mothers Aluminum polish and buff it off.  That’s what I did here and results were great. 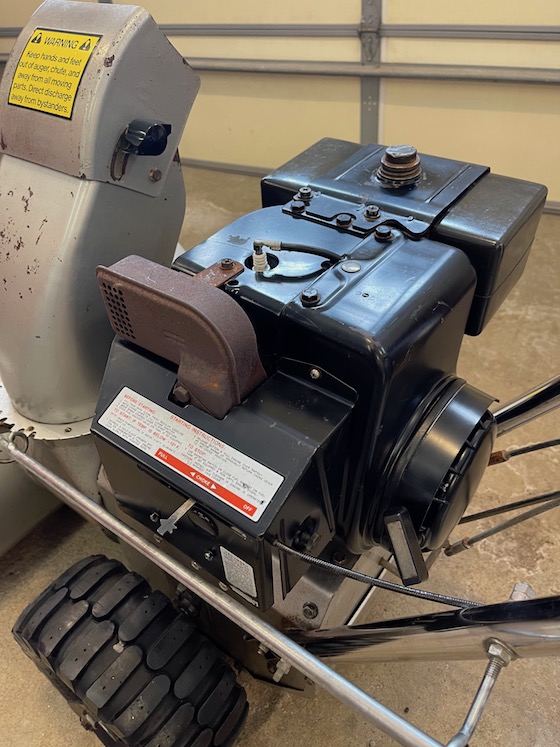 The black engine cover and shrouds were kinda faded after washing, so I took some Turtle Wax specifically made for black vehicles and gave it a whirl. That too worked well to freshen up the look. 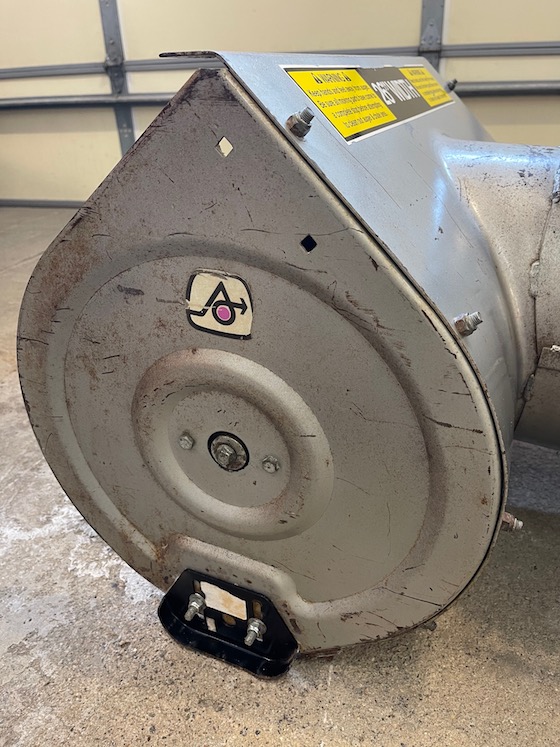 The old Arctic Cat logos on the sides are my favorite part of this old blower. They’re actually a reflective vinyl.

Lastly, you can see here, the handlebars and control area cleaned up nicely. Considering this blower is nearly 50 years old, its incredible that it is still largely stock and unmolested. About the only thing I saw missing were two lever knobs…One on the throttle control, and the other on the choke lever.

So, the real question is, “Did it run after sitting 20 years?” You’ll have to watch the video. FYI – when starting anything, make sure to turn the gas on. (Sigh again) 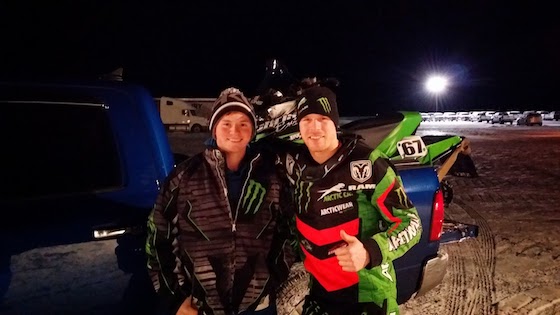 Jeff shared with me a cool photo of his son, JJ, who met Tucker Hibbert at the Christian Bros Racing shop after purchasing one of Ryan Simons Cross-Country ZRs from CBR. Tucker was grooming the practice track at the time, saw JJ’s Monster coat and jumped out of the groomer to say Hi and take a photo! 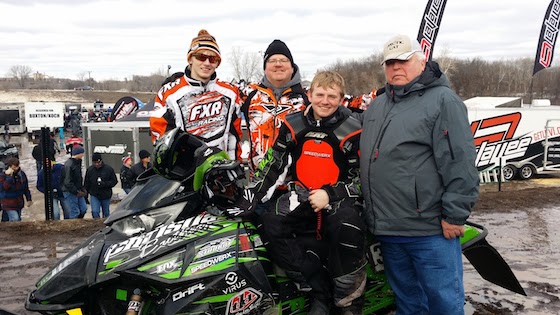 I like this photo Jeff shared for a variety of reasons…One, its nice to see how Team Arctic race sleds continue the rest of their life journey. Some are put on shelves, some destroyed or parted, yet others live on to race another day. As evidence here with Jeff (middle), his two sons, and Jeffs Dad (R) when they competed at the Red Bull Cross-Country National in Elk River, MN a few years back. I also like the fact, this is just a great family photo of a group of Arctic Cat enthusiasts.

Thank you Jeff for the opportunity to purchase this snowblower. I hope your dad is looking down smiling knowing its shined up, running and ready to race another day!