To conclude this four-part series on the Sno Pro 500, I want to discus aftermarket options.

Historically, the aftermarket has jumped on the performance-enhancing opportunities that exist with stock snowmobiles like a silicone-toting plastic surgeon jumps on image-conscious starlets in Beverly Hills.

While the aftermarket has responded to the new SP5, it’s a whole different beast this time around for a few unique reasons.

One – the SP5 won’t be a huge-volume seller like an 800-class sled, nor does its engine see use in multiple platforms that would traditionally see high aftermarket activity (i.e. Mountain). Two – history suggests that the Twin Spar chassis will be replaced in the next few years, and the aftermarket are reluctant to put their resources towards a short-lived model. And three – the people who typically buy aftermarket engine mods begin with a high-hp engine.

In short… it’s a risk for the aftermarket to pour their resources into developing performance kits for a low-volume, low/mid-performance engine with essentially a single application.

Despite the risks, both Speedwerx and D&D Performance have hustled to develop engine mods for the SP5, probably because it’s abundantly clear that riders want the race-focused chassis, but with more than 85 hp.

So, what have these two Arctic Cat speed merchants developed?

Their Exterminator Kit includes all of these bolt-on items for a trail-safe, premium pump gas performance package while retaining the stock bore. Horsepower figures aren’t yet known, but the kit will sell for roughly $1,500 and be available mid- to late-December. 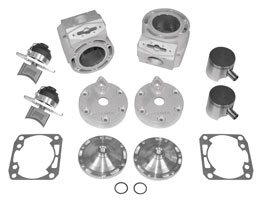 Speedwerx’s 730 big bore kit includes all of the above mentioned bolt-ons, as well as new cylinders (with gas-operated power valves), pistons and additional case grinding. The kit utilizes the stock EFI throttle bodies and requires the use of 91 octane fuel. The kit is based heavily upon the mod motors Speedwerx built in 2006 and suggests hp in the 135-140 range, with final testing to confirm these numbers set for later this month. The 730 kit should be available in late-December with a price tag of $3,500.

D&D Performance has a similar mix of products, starting with an interesting porting package that adds 16 hp and costs $979. Customers ship their stock cylinders and head to D&D, who then do the carving/cutting, add a Boondocker fuel control box and a plus-2 timing key and ship it back to the owner in four work days. Bolted-on and plugged in, the porting package delivers 101 hp and 69 ft.-lbs. of torque (up from 60 ft.-lbs. stock) on 87 octane. Their MagnaForce clutch kit will be sold separately. 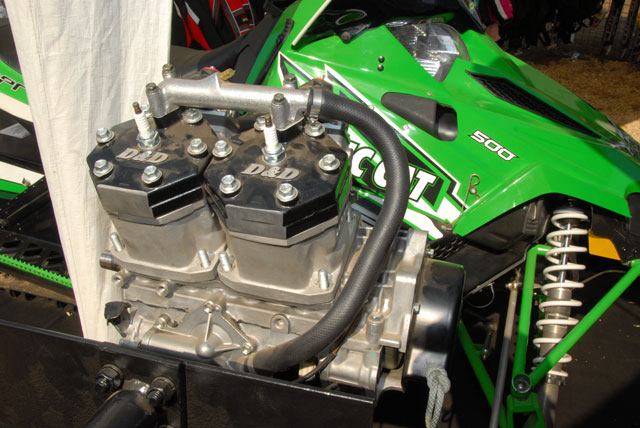 D&D also has a “Predator” 720 Big Bore kit that combines new cylinders, head/domes, pistons, Y-pipe, single pipe exhaust, timing key and Boondocker box that is currently producing around 135 hp on their dyno (download the dyno pdf here). It’s also available with a gas-exhaust-valve upgrade for $450 that further boosts bottom-end and throttle response. Using the supplied timing key requires the use of 91 octane fuel, however, owners can opt for stock timing and run 87 octane (with horsepower dropping to roughly 128). Price is $2,995 and the only additional requirement is a $189 MagnaForce clutch kit. Stock gearing (which is aimed at 100 mph) is retained, although those who are concerned with absolute top speed can gear higher.

I have already confirmed with both companies my intention to test some of their products this season, although it will be day-tests rather than season-long evaluations. Personally speaking, the bolt-on options and D&D’s porting package are especially intriguing, the latter of which achieves roughly the same hp as the carbureted 500 engine used in the Firecat (which produced 105 hp).

I also hope that visitors here who get their own kits/products will report back with their own opinions, either here or on the AI forum.

Regardless, it appears to me that riders who want the Sno Pro chassis and more than 85 hp have several good options, with total price tags that are in-line with stock 130-plus-hp sleds.