Team Arctic snocross racers traveled to the Hawkeye state and flew high in the Pro Lite Class adding to the new winner list.

The National Snocross circuit went into weekend two at the Dubuque County Fairgrounds in Iowa for rounds 3 and 4. Racers battled warm weather, heavy snows and a rough, technical track proving a challenge for many teams.

The Pro Lite class has been one to watch. After four races, there have been four different winners, with each brand winning at least once. Arctic Cat added to that list of winners on Saturday.

Rewind to Friday and second year Pro Lite racer, Anson Scheele, wowed qualifying 3-3 and then showed his potential in the Final. Scheele’s Christian Brothers Racing Arctic Cat pulled through the first corner coming out cleanly in first place. Scheele stretched his lead over the field and maintained the position for 13 laps until going bar-to-bar with a challenger until the final flag in second place – his highest Pro Lite finish to date.

Scheele was all smiles on the podium saying, “I had a good day. Despite the battle at the end, this is my first time on the podium, so I really can’t complain.” 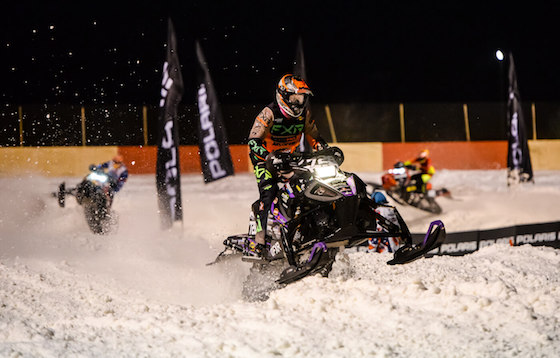 During Saturdays Pro Lite final, it was Theo Poirier from Woodies Racing leading the 15-rider field after lap six. Poirier went into the first corner in fifth, but charged hard and moved into second on lap two, then passing for first on lap seven. From there, Poirier didn’t look back finishing five seconds ahead for his first career Pro Lite win.

“The track Saturday was really rough,” said Poirier. “I got a good start, but found some really great lines. My ZR did the rest. It felt so fast.”

Adding to the new names topping the podium in Iowa, was Jacob Blanshan during Saturday’s Pro Am 30 Plus final. Blanshan brought all the thunder on his ZR passing into first on lap six for the win.