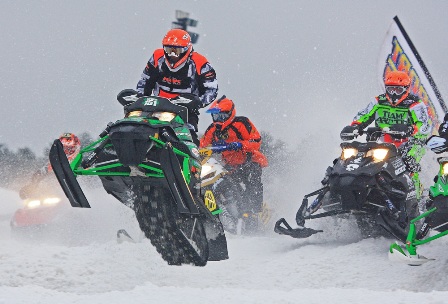 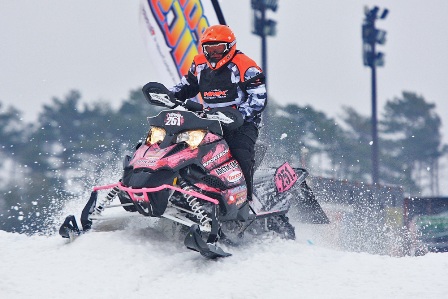 Andrew in Position to Capture Two Year-End Titles; Taylor Returns to the Track

Elk River, Minnesota (January 26, 2010) – A January thaw and a steady diet of rain highlighted the Shakopee, Minnesota weekend in the fourth stop of the International Series of Champions National Snocross tour. Rain soaked pits; a sloppy track and a shortened race program due to concerns for the safety of the racers made for a weekend of unexpected results and dashed hopes for many teams.

After a sloppy first round of qualifying on Saturday for Sport Super Stock #1 and Sport Super Stock #2 classes, ISOC officials decided to cancel the second round of qualifying and a created a modified Last Chance Qualifier in both classes in order to determine the final fields. The decision was bitter sweet for Torco/Arctic Cat pilot Andrew Carlson. A win along with posting the fastest lap time of any rider in the Sport ranks earned him the number one qualifying position for Sport #1. When the green dropped in the final, Andrew exited the first turn in fourth and immediately began to work his way to the lead, but another tangle due to sloppy track conditions dashed his hopes of a podium. Andrew however did salvage 8th place points and remains very much in the hunt for the year-end championship, sitting in third place just 15-points out of the lead.

In Sport #2, the cancellation of the second round of qualifying proved to be not as fortunate. Setting a blistering pace once again in qualifying, Andrew was in the process of executing a pass for the lead when he got tangled with the slower sled, dismounting him and his hopes for a front row position in the final. Andrew attempted to make the main from the back row of the LCQ, but came up short despite once again posting some of the fastest lap times of any rider in the class. Nonetheless, the youngest rider in the Sportech trailer sits third in points in Sport #2 for the year-end crown with just two points races left on the schedule.

The challenging track of Canterbury Park in Shakopee marked the return of Pro Women’s rider Taylor Carlson after nearly a one-year absence from competition following a major knee injury. While still working her way up to full-race speed, Taylor was pleased to be back on the track and back to competition and the team is expecting a strong finish from Taylor this season. “I’m still working on gaining full strength and mobility,” said Taylor. “I felt real comfortable on the track and now it’s just a matter of getting my timing back, especially in the jumps and rhythm sections of the track.”

Team Sportech/3M pro rider Paul Bauerly started the weekend off with an impressive run in Super Stock qualifying effort, taking a win and a fourth with blistering speed. However, like many top competitors, the rain soaked track and limited visibility hampered Paul in the final and he had to settle for a 12th place finish. Then as the night wore on and track conditions continued to deteriorate due to the incessant rain, a crash in Pro Open qualifying ended Bauerly’s hopes of making the main event.

“My stocker was super fast this weekend,” said Bauerly. “This is the best I’ve felt on the sled all season and I feel like I’m finding my groove. Each weekend we are getting closer to a podium finish, I just need to ride smart. It’s a good feeling to have as we head to Aspen for the Winter X Games.”

The team now heads to Colorado where Paul will battle the best in the world in ESPN’s Winter X Games. Then they’ll make the long trek east to New York for the Eastern Nationals, February 5-6.