Editor Note: This is a true adventure story that has needed to be shared on the pages of ArcticInsider for all snowmobilers to read. I was reminded of it after reading the original story written by Brad Dokken of the Grand Forks Herald and reprinted in the JAN/FEB 2020 issue of SnowTech Magazine. For all you adventure lovers, enjoy reading this story of three high-mileage heroes with some familiar names.

Rob Hallstrom recalls stopping to fuel up snowmobiles in Swan River, Man., with his two riding partners when a man approached and said he recognized them “as the old guys that rode to Churchill and back.”

“Of course, we responded, ‘Old guys?’ ” Hallstrom said. “We seemed to develop a following.”

“A little adventure for the common man is how we like to think about it,” Hallstrom said.

A St. Hilaire, Minn., native and retired electrician, Hallstrom says all of them are experienced wilderness riders, having ridden Cain’s Quest, an extreme snowmobile race in Labrador, Canada that’s more than 2,000 miles long with no specific route.

Trekking by snowmobile to Churchill seemed like a natural sojourn for the adventure seekers. From groomed trails to frozen lakes, from trappers’ trails to powerline right of ways, their route took many turns.

The journey from Grand Rapids took them to the northwest corner of Lake of the Woods into Manitoba and the destinations of Falcon Lake, Gull Harbor on Lake Winnipeg, Norway House, Oxford House, Gillam and Churchill. The ride back took them from Churchill to Gillam and then to Thompson, Snow Lake, Bakers Narrows, Swan River, Gimli, Border View Lodge near Baudette, Minn., and back to Grand Rapids.

Making what basically was a giant loop, the trio snowmobiled up to 320 miles a day, with each leg of the trip varying depending on the distance between towns along their route. They each pulled tow sleds with extra gasoline and carried a pop-up ice fishing shelter, a wood stove, small chainsaw and a few other items of survival gear in case they had to spend a night on the trail.

Fortunately, they had warm beds every night, Hallstrom says. There was a whole lot of wilderness between most of their nightly stops.

“I don’t think we were ever in a situation where we thought we were in trouble,” he said. “Certainly, we rode through a lot of cold temperatures.”

The seeds for the trip actually were planted last year, when Hallstrom, along with Roger Gorder of Grafton, N.D., and Lee Gudajtes of Minto, N.D., snowmobiled to Churchill, trailering their sleds to Gillam, Man., some 660 miles northeast of Winnipeg, and hitting the trail from there.

“I hadn’t been back more than a week or two when Paul Dick from Grand Rapids called me, and he’d heard I’d gone to Churchill and said he would like to go but wanted to go right from his place,” Hallstrom said. “That had always been a dream of mine, so I said I’d be in for that.”

By that time, though, it was late March and so they opted to wait until this winter. Hibbert, whom they knew through Cain’s Quest and other snowmobiling events, got involved in the meantime.

With the trip on the calendar, the trio began planning and working out the numerous logistics that needed to be addressed before making the long trek through wilderness country. Hibbert did much of the GPS work in laying out a route, Dick worked out snowmobile details and Hallstrom reached out to Manitoba snowmobile groups and natural resource officers to gather more information about trails and places they could or couldn’t ride once they hit wilderness country.

“The preparation is almost as much fun as the trip with things like this,” Hallstrom said. “It’s a lot of phone calls, a lot of talking to people.”

As the trip approached, Hibbert drove from Idaho to Grand Rapids so the three of them could get everything situated. The Arctic Cat Norseman 6000 snowmobiles they drove have long tracks, wider skis and get fairly good mileage, Hallstrom says. They beefed up the machines with heavier springs, auxiliary bumpers and lights and GPS units they wired into the electrical systems.

“It seems like if you bring the parts, nothing breaks,” Hallstrom said with a laugh. “If you don’t have the parts, that’s when things go wrong. That’s why we took a lot of stuff with us.” 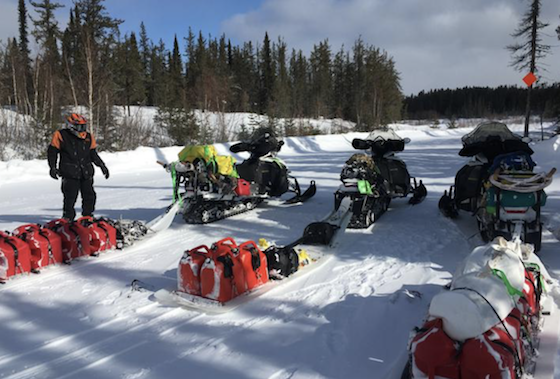 On the trip north, they ran groomed trails from Grand Rapids to Lake Winnipeg the first two days but “sort of bushwhacked” north up the east side of the big lake to Norway House, Man., in near-whiteout conditions, at times, Hallstrom says.

“You couldn’t even tell if you were moving,” Hallstrom said. “Everything was white. We’re navigating with GPS so you’re just kind of creeping along fairly slowly, keeping each other in sight. The lake was really rough, and you couldn’t see a bump coming. Everything was just white, so you just kind of slow down in those conditions.

“That was probably the worst we had.”

Making the trip in March also meant avoiding the worst of this winter’s cold weather. They encountered temperatures of 15 to 20 below, Hallstrom says, which was far better than last year’s trip, when the mercury dipped to 44 below zero.

Hallstrom carried a Garmin inReach tracking device that allowed him to send text messages by satellite; the unit also sent out a signal every 10 minutes showing their whereabouts.

“It was a lot of fun for friends and family at home,” he said. “They were able to go on their computers and watch a little map, and every 10 minutes could get a little dot where we were.

“We were getting kind of a big fan base of people all along and at home.”

The only mechanical issue they encountered occurred near Thompson on the ride back, when one of the sleds developed a hole in the heat exchanger, a part on the liquid-cooled sleds helping keep the machines from overheating.

That turned out to be a great place to have a problem, Hallstrom says. They met a snowmobiler on the trail who put them up in contact with a welder to fix the hole.

That was just one example of the hospitality they encountered throughout the trip, he says. On the trail to Oxford House, they met a native who was hunting moose but took the time to show them a better trail than they had planned to take and got them steered in the right direction.

“People were so nice to us everywhere we went,” Hallstrom said.

They took a day off in Churchill to relax and explore the remote community before starting the long trip home.

“We saw a lot of wildlife-we saw caribou, wolves, wolverine, snowy owls, (but) we did not see a polar bear,” Hallstrom said. “We didn’t expect to, but we would have loved” seeing one.

With the trip in the books, Hallstrom says Manitoba is a destination snowmobilers should experience. Annual trail permits for nonresidents cost $150 (Canadian), and seven-day permits cost $75.50.

“Manitoba has fantastic groomed trails, and they’re promoting snowmobiling,” Hallstrom said. “It’s great snow up there, and it’s a long season. Everybody wants to go to the mountains, but there’s some great snowmobiling in Manitoba.”