Real winter finally arrived in full-glory across a large swath of Minnesota (and the Midwest) last week. Given the temperature swings of the past few months and the fact that it’s March, I knew I had to get out and ride before it melted.

Three days later, I’ve nearly forgotten just how lame most of the last three months have been.

Our adventure began on Friday with my son Calvin. We loaded up the truck and trailer and drove north for 75 minutes until we saw what looked to be ridable snow, near Rush City, Minn. We unloaded, spied some trail signs and fresh tracks, and then simply went riding. It was our first time in this area, and it’s always cool to discover something new. 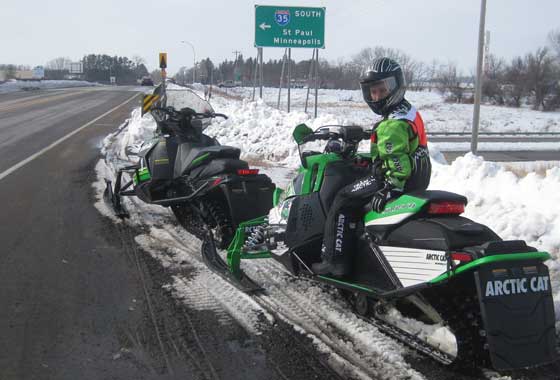 Although I’d hoped to educate Cal on the fastest way to race the I-500 towards St. Paul (by hopping on the road and hoping nobody notices), we opted skip the freeway back to the Twin Cities and instead pointed the sleds North, toward St. Croix State Park. 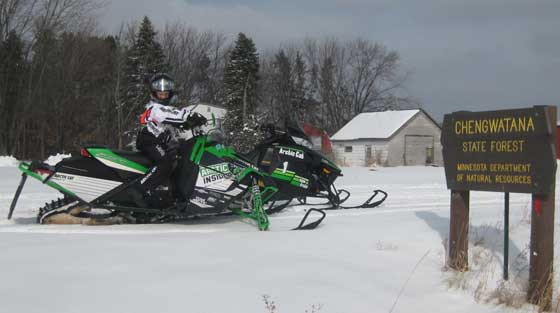 Decent-snow and trail conditions turned awesome once we hit the Chengwatana State Forest, where the abundance of trees made a difference in the amount of snowpack. 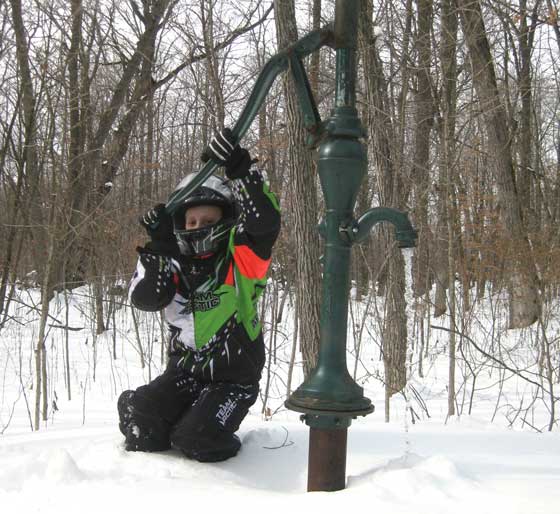 I’ve learned that the key to Calvin’s ultimate enjoyment of adventures is to find jumps and/or interesting things to stop and look at (at which point he can dive into the sugary snacks). This pump in the St. Croix State Forest helped wash down the remnants of gummy worms and sour patch kids. 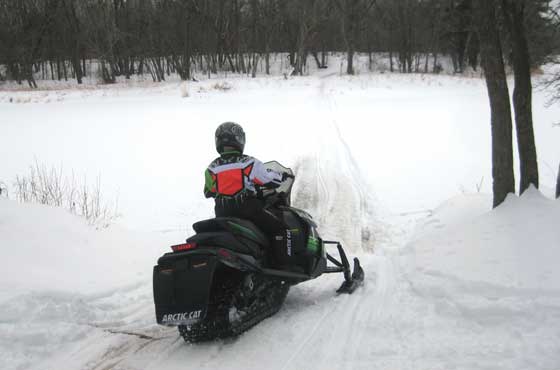 Crossing the Kettle River. Lots of slush on this ride (not here, but on Rock Lake). 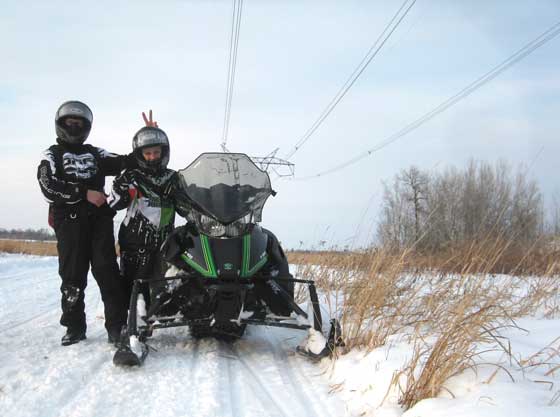 In a rare role-reversal, I got the bunny ears on Cal without him noticing. It’s usually the other way around.

Cal and I switched between the F1100 and the Sno Pro 500. He liked the F1100’s quiet sound and electric start, but he preferred the easier-steering Sno Pro (and the new Arctic Cat hand guards that we’d added the night before). 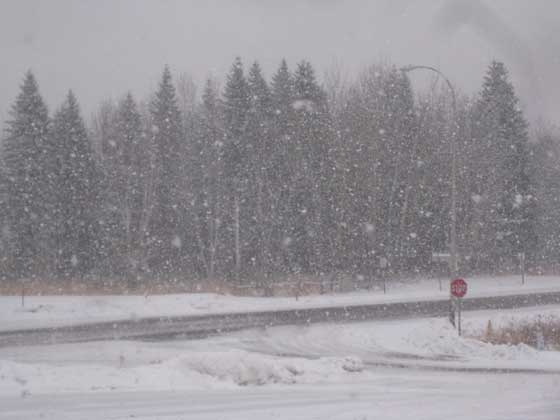 The next day my brother-in-law Dean and I headed further north for what would be a two-day “saddlebag” ride on the C.J. Ramstad North Shore Trail between Two Harbors and Grand Marais, Minn.

When we got to Moose Lake for a pit stop, the snow was falling hard and fast. A good sign! 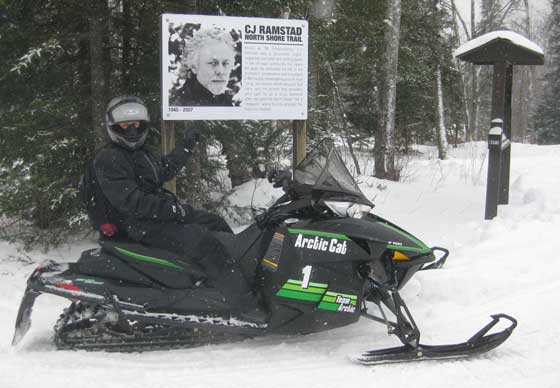 We parked in the dedicated trail lot up the ridge from Two Harbors, at which point there’s a great sign explaining the C.J. Ramstad Trail. I saw several people stop and get a similar pic to this, which made me smile.

The Ramstad/North Shore Trail is one of my favorite rides. I first rode it around 1990, have raced on it (in the old Jeep 500) and had many, many trips along it. Since it gets lake-effect snow, it’s usually one of the best places to ride in the state during crummy winters like this one.

Dean was happy to be riding his new 2011 Arctic Cat F8 LXR with the Fox Evol shock upgrade. This was my sled last winter. After a lot of sweet-talking to his wife, Dean got the green light to buy the sled. He wore a similar smile the whole weekend.

I’m always struck by how different the weather can be along the North Shore compared to the rest of Minnesota. The 2-3 feet of snow between Two Harbors and Finland was evidence of the point.

I’m also struck by how quickly I forget about otherwise poor winter once I’m planted in good snow.

Sometimes it’s easy to look out the windows of our homes or work and, if it’s brown, simply put off riding until the snow comes to us. That same browness can easily squash our enthusiasm.

Yet whenever I seek out and find snow, I ALWAYS wonder why I didn’t do so sooner?

My conclusion this time around is always take a chance on finding snow, even if it isn’t perfect conditions. Because riding trails with dirty/icy corners is still a thousand times better than not riding at all. And fun stuff always happens on snowmobile trips. 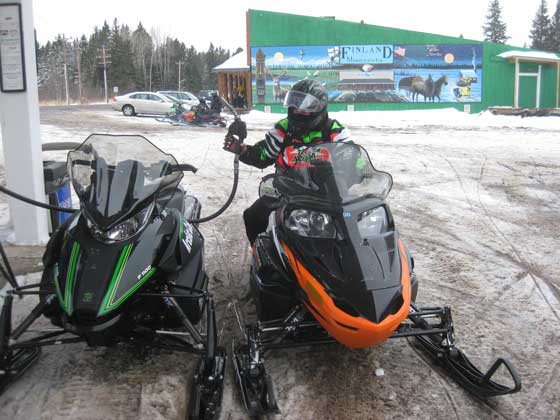 Before heading into Grand Marais, we made a slight detour to Devil’s Track Lake for a bowl of fish chowder at The Landing. Seriously, this place makes the best fish chowder in the world. 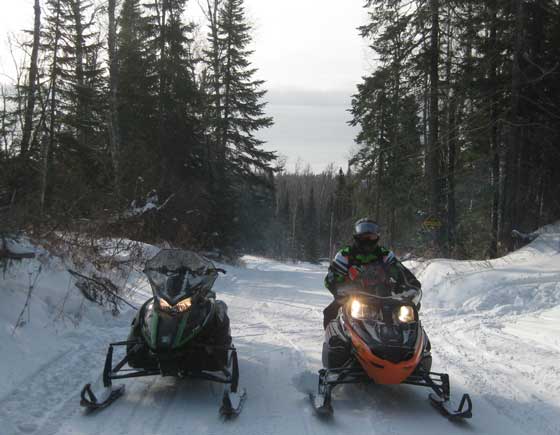 After overnighting in Grand Marais, we headed back towards Two Harbors early Sunday morning.

I always stop at this spot overlooking Lake Superior in the background (it’s tough to see on this pic). 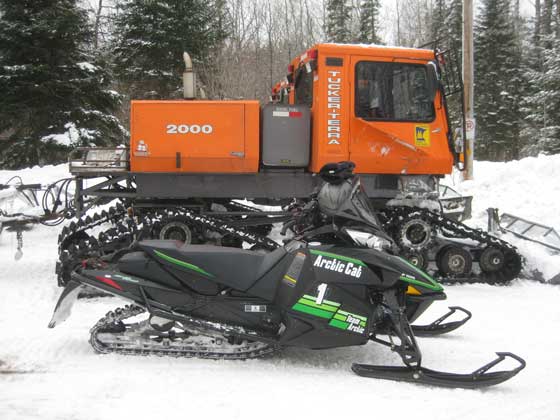 Beautifully-groomed trails between Grand Marais and Finland courtesty of the state’s Tucker Sno-Cats.

Must have been something wonky with the groomers responsible for the trail between Finland and Two Harbors this weekend, as this section didn’t receive the usual Saturday night smoothing. 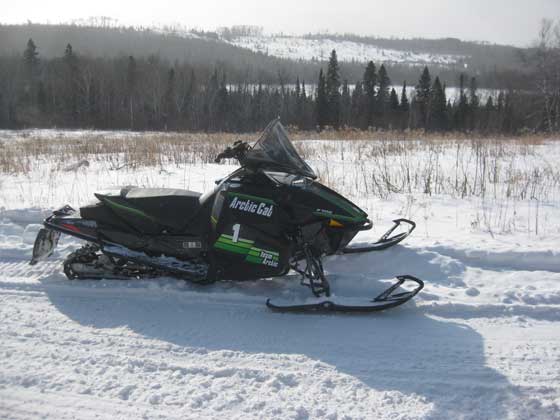 Just north of Pike Lake, between Lutsen and Grand Marais.

This was a familiar sight the first half of Sunday’s ride… Dean stopping to clean the fog out of his new helmet.

He kept blaming the helmet, but if you can see the amount of steam billowing off his head, I think you’ll agree that the helmet wasn’t the main problem.

After convincing him to remove 13 of his 27 layers of clothing, the sweating stopped and the fogging ended.

As a side note, the funniest thing that happened this weekend occured when we were leaving The Landing on Saturday. The place was packed with snowmobilers, most of whom had put their helmets and gear in an area near the fireplace.

As Dean and I were putting on gear for the ride to Grand Marais, he realized that the balaclava he’d put on (and wore for a good two minutes) was someone else’s! I of course had to remind him of that gross mistake for the remainder of the trip. 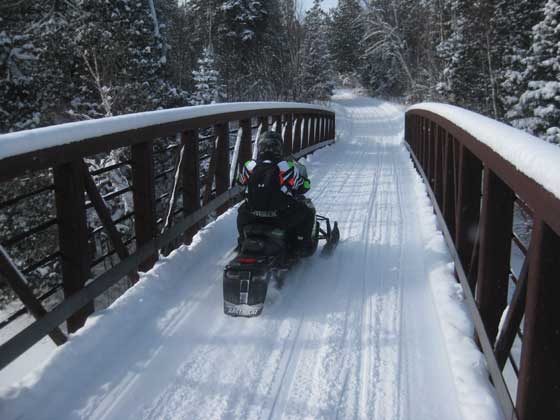 There are lots of bridges spanning cool rivers along the North Shore. Rivers and creeks with great names, like Devil’s Track, Temperance, Manitou, Baptism, Skunk Creek, Encampment and Sucker.

We opted for a slight detour inland on the way back to Two Harbors, heading on the Tomahawk Trail to Isabella, then onto the Yukon Trail back towards Two Harbors.

We stopped at the famous Trestle Inn on Crooked Lake, but just for a photo as it wasn’t yet open this early on a Sunday morning.

We fueled up at the Knotted Pine near Isabella, where I also took care of garbage duties. 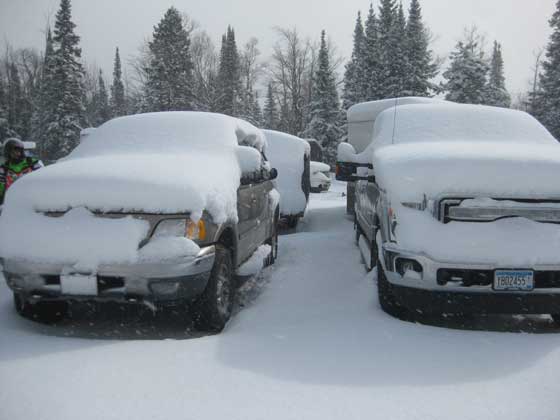 When we arrived back at the parking lot near Two Harbors, we were pumped to see the 12 inches of lake-effect snow covering the trucks and trailers in the parking lot.

Again… seeing all the snow and riding for three straight days has gone a LONG ways towards turning around my mindset on this winter.

While I surely would have preferred 3-4 months and 2,000 sledding miles of “normal” winter, I certainly savored these three days and 400 miles in a way that I wouldn’t have otherwise. It’s not quantity, it’s quality. And three high-quality days of riding were a blessing I’m grateful for, and fuel for the snowmobiling fire.

As always occurs on these kind of trips, I came home with a handful of new snowmobile maps I’d picked up along the way. I love maps of all kinds, and I’ll save these and refer to them now and into the future. 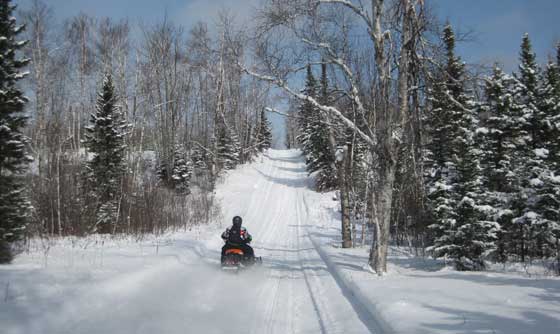 Warm temps are returning to the upper Midwest this week, and I’m not sure if I’ll eke out another ride before season’s end.

I’m glad I snapped a lot pix like this, which might have to sustain me until next winter. 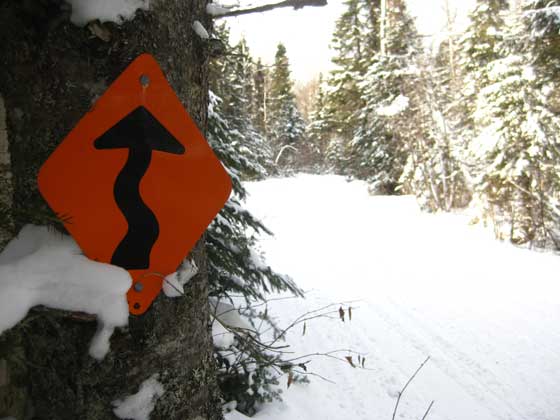