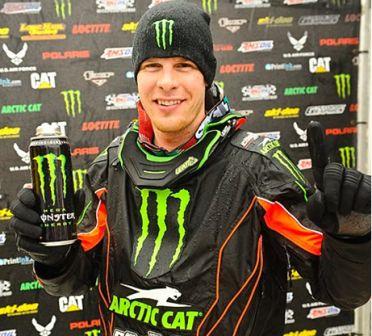 By winning both ISOC Pro high-point championship titles this past weekend at the season finale in Lake Geneva, Wis., Tucker Hibbert fulfilled one of his main goals for the season.

Then, while sitting in the airport waiting for his flight to Norway (for the FIM Snocross World Championships) he fulfilled his other goal of being interviewed by me for ArcticInsider.com.

Hibbert: In 2008 won the Pro Stock despite not racing the entire season. The last time I won both championships in a single year was 2002 (Note: The first year of the Firecat chassis. –Ed).

AI: How does winning this year compare to 2002?

This year was good. Going into the season, not having raced a full season for a few years… it brought an added challenge as well as added motivation. As a team, our goal this year was to win the championships. I went into Geneva with a lead, and I raced to preserve it.

Winning the titles this year was more rewarding than I thought it would be during the past few seasons when I wasn’t focused on it. It’s tougher than I remember, having to be ready for every practice, every heat race and every main, because every point you earn (or don’t earn) matters. I was trying to gain points every time I hit the track.

I shouldn’t say I didn’t remember it being so tough, but I guess that going for the championships brought the difficulty back into focus.

So the satisfaction everyone on the team is feeling right now, is deep. And it makes me proud of everything our team did to accomplish it.

AI: The decision to race an entire season was a big one for you. What were your reasons for racing a full-season, and are you satisfied with the choice?

Hibbert: It was a fairly big decision, something we haven’t done since we started our own team. We thought about it for awhile. The reason for doing it was that sponsors wanted us to do it, and I also had the feeling that I wanted to try it myself. Once we made the decision, the goal really motivated me.

As I mentioned a moment ago, going for a championship takes more planning, like how many sleds we build, parts supply and logistics. We needed to be prepared for every heat, every race. We added three more races to our season compared to the past couple years, but it added more time commitment for testing, practicing, work during the week, more back-up sleds and travel time.

AI: Geneva was the first race that I can remember in which you didn’t win at least one class. I hate to be the dork that asks the question, “Why didn’t you win?”, but we’ve gotten accustomed to you winning pretty much everything. So… describe how the two finals went and…why didn’t you win (laugher)?

Hibbert: I wasn’t giving anything up. I was trying to ride smart. The track was gnarly, especially on Sunday with all the rain.

I felt strong in Pro Stock, was running second and looking to make my move, but I made a mistake by going too fast up the hill. I rode up too high on the berm, going too fast, and stalled-out. I couldn’t hang on, fell off and the sled went down to the hill. I pretty much threw that race away, and am bummed out about it.

After that mistake, I didn’t to go bonzai to try and win. So rode conservatively because I already won the championship, and I wanted to be strong for the Open class on Sunday.

Sunday the conditions were even more gnarly, with down pouring rain. It was the worst conditions I’ve ever raced in. Everything was challenging. In the final, I didn’t hold back, but I just couldn’t find a groove. Made a couple of charges to try to get to front, but they didn’t work. So I rode a comfortable pace and took the championship.

AI: So you didn’t win either class at Geneva, but you did win both championships…Hot Stuff Pizza afterwards, or not?

Hibbert: No, I had some Old Chicago/Uno Pizza a few moments ago here at the airport. I’m saving my splurge on Hot Stuff for when I return from Finland.

AI: Rank the following in terms of importance: Winning a class championship; winning individual races such as Duluth; winning X Games; winning the FIM World Championships; or beating me in a mountain bike race.

AI: Tell me one good Kirk story from the weekend.

Hibbert: My dad was riding my sled up to the track to meet me for the racer introductions prior to the Pro stock finals. I guess he was trying to talk to Rob Dahlen on the headset at the same time when he goosed the gas and crashed, in front of all the other racers and crews. The sled almost hit one of those portable light towers. Everyone was shocked, but apparently they didn’t want to laugh at him, so they kind of pretended not to see it. The only bummer was that I missed seeing the whole thing.

AI: What’s the most corn-ball thing you witnessed this season?

Hibbert: Hmm, I saw many corn-ball moves, like always, but since it’s fresh on my mind, here’s my answer: Justin Tate missing his Pro final main at Geneva because he was watching Caddyshack in the trailer.

Hibbert: The highlight was X Games, in part because I everything went so smoothly and I didn’t have to pass my way into the lead. The lowlight was not winning a final this weekend.

AI: What are you plans for the spring and summer?

Hibbert: Rest, ride mountain bikes, race motocross and be a redneck on my farm.

AI: Okay, good luck in Finland, and even more luck trying to beat me in mountain bike races this summer.

Hibbert: Actually, I need to start beating you so that my dad will quit giving me crap about it.