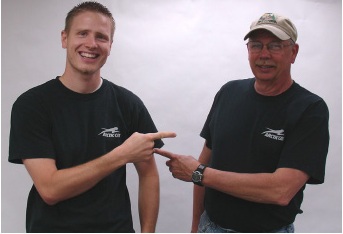 Two years ago, when Arctic Cat hosted their ATV Dealer Show in Thief River Falls, the company sold black T-shirts to all the employees to wear during the event.

Sensing a great opportunity to have some fun with the situation, a group of 13 engineers and technicians launched the Ragged Shirt Race.

The rules were simple: $3 to enter… and wear one of the black shirts EVERY MINUTE they were in the building, every day of work. Whoever wore black shirts for the most work days, wins.

Not surprisingly, some didn’t last long. Others moved on to greener pastures, as they say.

Some quit around the one-year mark, and other gave up after 18 months of wearing the same damn shirt every day at work.

All good things must eventually come to an end, and the end of this story came a couple weeks ago when the final two contestants – Jon Edwards (left), a Design Engineer for Touring sleds, and Mike McArdle (right), Dyno Technician – decided upon a draw, splitting the $39 cash prize.

AI: That was a seriously impressive effort to win $39. Your friends and family must be proud.

Mike: Actually, the total prize was $44 because one of the last entrants had to pay more to get into the contest. So Jon and I each got $22. (laughs).

Jon: My wife hated it, and she kept asking me to quit. I told her many times, it’s not about money, it’s about winning.

AI: How many shirts did you have to work with?

Mike: My wife, Jenny, works here, so I had her five shirts along with my five.

Jon: Everyone in company bought five shirts for $10, and those five shirts were all I had to wear. Mike had 10, Andy Beavis had 10 and some other people had more than five.

AI: Did you ever wear a shirt to work two times between washings?

Jon: I hate to admit it, but yes. That’s why my wife wanted me to quit the contest, because she always had to make sure I had clean clothes.

AI: How ratty did your collection of shirts become?

Mike: Mine are actually in good shape, because they started out as high-quality shirts.

Jon: Mine were definitely the thinnest. They were so thin that you could see through them, and the biggest hole was a half-inch in diameter. On the other hand, they were just getting really comfortable.

AI: Any cheating that you’re aware of?

Jon: Guys in shop (like Mike) could wear their shop coats over their shirts, which almost cheating. Their shirts looked brand new. There was one guy wore other black shirts under his shop coats and went undetected for a week until someone flung open the coat to expose the cheating!

AI: How are you going to spend all the money?

Mike: No special plans. Maybe pay off the house, buy a boat and a new car.

Jon: It’s still in my wallet, I’m saving it for something special.

AI: Have you worn one of the black shirts to work since the contest ended?

Jon: Not to work, but around the house. It was funny when some people who had been in the contest for a long time, like a year, finally quit. The first time you saw them in something other than the black shirt, they looked awkward.