A recent trip to Arctic Cat delivered the usual large number of interesting sights and conversations with my favorite people in the world.

I’ve probably said it before, but Gary Nelson is the first guy I always visit on these trips. For one, Gary knows pretty much everything that’s happening at Cat on a daily basis. And for another thing, Gary makes me laugh.

He accomplished the latter when he showed me the Gary Nelson Bobble-head Doll, a present given to him by his fun-loving cohorts at work. I’m working on getting the Gary Bobble-head into the 2016 Accessories catalog, because I would purchase at least 10 myself.

After sharing a few laughs, Gary and I talked about a range of subjects, including me pushing for a Catfest-type event in TRF in the summer of 2016. That would be Cat’s 55th Anniversary, and a perfect opportunity to have another event patterned after the 50th, but I think it could be scaled down slightly in size/scope.

Waddya all think about such an event… would you attend?

After chatting with Gary it was time to see some other people. On my way, I stopped at the office door of Rick Stokke, a longtime friend and Arctic Cat sales manager/racer/historian and all-around good guy.

Rick wasn’t there, but as usual he had a few interesting items taped to his office, that he’d gotten via his role as the company’s International Sales Manager.

Here was an interesting Wildcat advertisement for Mexican markets.

Above were images from (top-to-bottom) Israel; Victoria, Australia; and Panama.

Yes, Arctic Cat is truly a world company. And it’s so wonderfully-cool that it all begins in the humble town of Thief River Falls.

Speaking of humble, the next guy I visited with was Joey Hallstrom, who had recently found an old photo album in his garage, in which were dozens of photos from his snowmobile and motocross racing period in the early 1980s.

I should have taken a photo of one of pics, because it showed a mop-topped punk who weighed no more than 115 lbs., with the style of Bob Hannah.

What became of that kid????

While I’m on the subject of “finding” old artifacts, I saw a pretty remarkable binder of information during my visit with Donn Eide, Snowmobile Engine Design Manager.

These engineering plans from the last days of Arctic Enterprises hold some wonderful what-ifs, including an IFS model named after Mario Andretti, as well as various Arctic Cat and Scorpion machines.

Eide has a razor-sharp memory of this stuff, which has been called upon in recent years by collectors looking for information on the 1982 Arctic Cat prototypes.

I think we’ll see more of this kind of info bubble to surface in the future.

Donn also had what must be one of the very last documents from Arctic Enterprises: his final check (uncashed!) from the company dated 1986. Instead of cashing-in and living large on the .17-cent check, Donn saved it as a memento from that era.

After sharing a few laughs and listening to a couple stories about Donn’s amazing career, we talked about the modern engines in Arctic Cat’s line. As one of the principle people who launched the C-TEC2 DSI 6000 for 2014, Eide has been going full-bore into this new era of domestic engine production at Arctic Cat.

His humble, gracious personality prevents him from talking too highly of this first snowmobile engine, but the truth is that he’s very, very proud of what the team accomplished.

Personally, I’m in awe of it, and think they should be shouting from the rooftops, but I’m known for being a little more vocal than Donn.

After stepping out of Donn’s office, I stepped into Ron Solberg’s office. Ron is another guy who is quiet and humble, yet who’s had a profound impact on Arctic Cat as ATV Product Manager.

Solberg has enjoyed a varied, interesting career in the motorsports industry, going all the way back to the Arctic Enterprises era. Ron was hugely influential in building and launching Arctic Cat’s first ATV. Thankfully, Ron agreed to an interview. Stay tuned…

For lunch it was time to visit my favorite diner in TRF: Dee’s Kitchen, but (GASP!) it’s not there anymore!

Relax, it’s still there but with a new name (Biff’s Kitchen), new owner, but the same amazing home-cooked meals for a great price.

Along with Gary Nelson (right), Kale and I ate with newly returned Regional Sales Manager Mark Miller (middle), who is back at Arctic Cat in a role that he’s well equipped for.

After lunch it was time to see what model machines were on the production lines.

I must admit, of all the cool things that I see during these trips to Arctic Cat, watching ATVs, side-by-sides and snowmobiles come to life ranks up there with the best of them.

The constant hum and movement of these assembly lines reinforces the fact that this coming together of components is the culmination of hundreds of people’s efforts to design, test and build them.

And yet this process is really just the beginning, because the real magic is experiences that occur when these machines reach our hands.

I will never, ever tire of seeing this process.

Having just been announced at the recent ATV Dealer Show a couple weeks earlier, the new 2015 Arctic Cat Wildcat Sport was already in full production.

Even without the ROPS cage and hood, these 60-in. wide machines look badass. I cannot wait to ride one.

Beautiful, shiny 700 TBX 4x4s were cruising off of the ATV assembly line.

After getting our fix of the assembly lines, Kale met with the lead snowmobile engineers (R-to-L) Troy Halvorson, Lynn Berberich and Brian Dick, to discuss plans for the upcoming 2016 model line.

The process of creating brochures, press releases and media riding events is ongoing, and involves the expert partnership of both Marketing and Engineering.

After the meeting I ran into Design Engineer Andy Beavis, who was confirming that production pieces matched the design prints for a suspension rail for the M7000s that were on the production line.

Consistent sampling of various components by Quality Control, followed by occasional recruitment of engineer’s eyes and supervision, help improve the quality and vehicles that bear the Arctic Cat name.

Fittingly, after talking with Andy Beavis about suspension rails, I had a conversation with suspension engineer Jeff Olson, the guy responsible for suspension calibration on the 129- and 137-in. suspensions.

Jeff agree to a proposed story for this coming winter, where I’ll spend a day or two with him and others as they work to calibrate a suspension for production.

It didn’t occur to me until after I left Jeff’s office that he was probably the fifth person who talked with me about riding plans for this winter.

Clearly arrival of winter was on everyone’s minds this day. 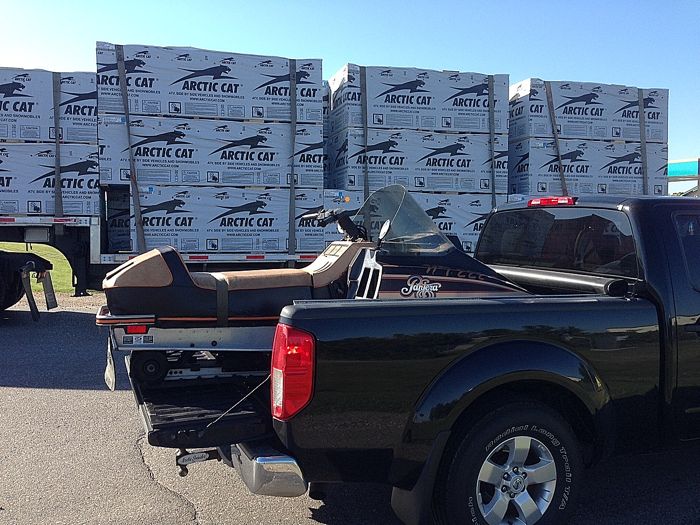 With our work inside Arctic Cat concluded, it was time for some extracurricular activities that make these trips even more enjoyable.

The first was to deliver this 1981 Pantera to friend/co-worker Pat Hanson, who wants it for his daughter.

Not long after dropping it off at Pat’s place, his dad Lyle (left) stopped by and we all shared in a wonderful BS session about Arctic Cats and the various places we’ve worked together over the years.

Lyle has driven Arctic Cat’s Sales & Marketing semis for decades. Pat has done the same, albeit for fewer decades.

Driving the semis with show sleds is a tiny part of what I see them do. They’re also expert mechanics and trouble-shooters. Plus Pat can ride a snowmobile as well as pretty much anyone I know. Seriously.

Sometime I’m going to do a story about how nearly EVERYONE from Arctic Cat that I’ve ever ridden with, is truly a professional-level rider.

After making a minor dent in Pat’s shop fridge, it was time for our next stop: Greg Spaulding’s shop.

He grew up in Bemidji, Minn., where his dad was an automobile dealer, as well as a Ski-Doo dealer.

These days, Greg is leader of the 2-stroke engine group at Arctic Cat, as well as a purveyor reproduction vintage snowmobile parts for Ski-Doo and Arctic Cat machines.

In between the dealership days and now, Greg has led a pretty amazing career. In fact, I need to interview him about it, but that’s for another day.

Greg has a HUGE fleet of vintage sleds that he used to created his reproduction parts business.

But that number is going to decrease A LOT in the next year, as Spaulding is getting ready to sell most of the machines.

There are a lot of rare, interesting machines in his collection. Mostly Ski-Doo and Arctic Cats, but with a dozen or so other interesting brands and models. 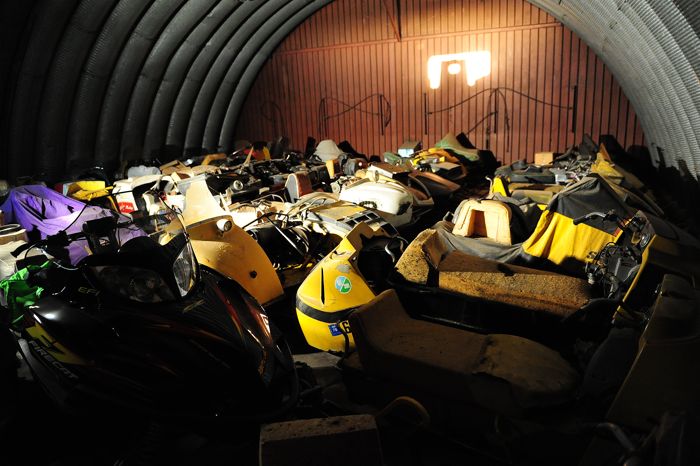 It’s pretty dark to see well, but inside his shop are the very best examples, including a 2003 Firecat F7 with less than 1-mile on the odometer; 1975 1976 250Z race sled; quad-plug El Tigres; Rupp Nitro and a bunch of interesting Doos.

There will be more to say on Spaulding’s sled sale here and on other sites in the coming days and months, as soon as he formulates his game plan to best depart with them.

While we were at Greg’s shop, I snapped some pix of this parts inventory.

He ships parts daily, all over the world. It’s an impressive operation for an after-hours-and-weekends business.

Greg (left), Kale (middle) and I were joined that evening by the legend, Larry Coltom (right).

Larry is another guy that I need to interview, not because he’s a stranger to most people, but because there’s SO much more to his career as an engineer and racer that most people don’t know about.

On this evening, he was telling stories about a couple of his runs in the Winnipeg-to-St. Paul I-500 cross-country.

One story that elicited a lot of laughter was from a leg in 1977 (I think). He’d run pretty strong, he thought, a long while that day. Everything was clicking along nicely EXCEPT for the fact that he drank too much juice before the start, and he was feeling it. A lot.

And I mean A LOT!

He kept trying to put it out of his mind and concentrate on going fast, but eventually he couldn’t stand the pressure.

With no other choice, he finally pulled his sled off the ditch and into the field, where he experienced the greatest relief he could imagine. Having drank so much AND waited so long, Larry figures it took five minutes to clear the system.

He no sooner zips up, starts his sled and blasts down the ditch, only to hit the finish line less than a mile later!

And just to make it all the more agonizing, he finished only about one minute slower the fastest time for the leg!

Larry being Larry, he only laughs about it now.

“I was never going to win the race,” he said.

But I’m not so sure I believe that. In the approximately seven times he competed in the I-500, he finished three times, notching a 15th, 7th and a 5th!

Not too shabby for a guy who made his living turning left.

After more stories like that one, we all shook hands and called it a night.

And so concluded the first of many trips I’ll make to Arctic Cat over the next six months. Stay tuned for more.