Nearly as shocking as the news of Arctic Cat/Yamaha partnership was the fact that it happened without public clues prior to the announcement.

In a sport that feeds on rumor and innuendo, there was precious little news slips from either company prior to the official announcement.

Recently I perused a stack of old sled magazines and brochures to see if there were indeed hints that foretold of this historic event.

I was blown away by what I found!

One of the first clues I found of a developing relationship between Arctic Cat and Yamaha was this prototype 1979 Arctic Cat el tigre Cross-Country sporting the Yamaha T.S.S. front suspension.

The clean, simple lines of this system are clearly evident, and one wonders how history might have been different (for both companies) had this machine gone up against the formidable Polaris Indy, ironically shown in the background?

Taken by Arctic Cat fan Bob Vojvodich, this shot was shopped around to various snowmobile publications in late 1979, but no editor risked his or her job publishing it. Given that most people have never seen this image, I can understand why it didn’t cause any stir.

Less understandable is how the famous much-loved “Flying Tigers” advertisement from 1979 didn’t raise a few eyebrows?

Seriously, this ad was used in a half-dozen snowmobile magazines that season, as well as in the book LEGEND: Arctic Cat’s First Four Decades.

How in the HECK did we miss the juicy hint of the two brands’ future relationship?

But as we all know, the embers of passion were never entirely extinguished among a core group of Arctic Cat faithful, and out of the ashes of Arctic Enterprises roared a new Arctic Cat for the 1984 season.

The question I ask now: Was Yamaha helping to fan the flames?

Little did I know, the answer to that question was literally two feet from my eyes!

Produced by Arctco in 1986, the famous “Gone Fish’n” poster (above) was an instant classic that soon became collectable.

Amazingly, this very poster has hung on the wall of my office for nearly 20 years, but I suppose I never really looked close enough to see the telltale sign of Arctic Cat and Yamaha’s reborn relationship.

Likewise, I’m a bit dumbfounded about not looking close enough to see the cue in this great ad (also from the 1986 season).

In 1990 the Minnesota-to-Moscow expedition heralded great things for Arctic Cat and U.S./Russian relations.

It’s no wonder that in their desire to understand the outstanding chassis and suspension creativity within Arctic Cat, that Yamaha was also interested in tapping into the legendary racing heritage of Team Arctic. After all, as the old adage goes, “What wins on Sunday sells on Monday.”

But what’s less understood is why Arctic Cat chose to highlight the other brand in this poster from the 1994 season? And why didn’t the racing world catch on? 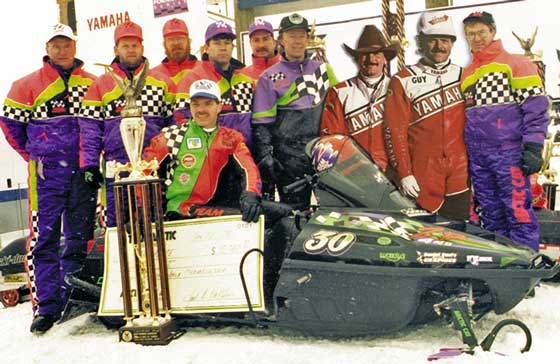 As long as I’m asking questions… surely some fans at the Eagle River Worlds Championship must have noticed something amiss following Brian Sturgeon’s podium celebration after capturing the Formula III win in 1995 aboard the Arctic Cat ZRT 600, right?

Is it possible that Sturgeon won this event with a Yamaha 4-stroke engine?

The last cue to the partnership happened much more recently, when they nearly let the cat out of the bag during the announced of the Tucker Hibbert Replica Edition F800 RR at the Sno Barons Hay Days event this past summer.

This was the actually machine unveiled to the throngs of fans on Saturday and, somehow, nobody noticed the non-production, Yamaha-influenced styling cue.

A few hours after the unveiling, someone from Arctic Cat noticed the mistake and corrected the display sled. (How images of this machine weren’t splattered all over Facebook, Twitter and TotallyYamaha.com is a question I’m still trying to answer!?!)

With the 20/20 vision that comes with hindsight, it’s clear to me now that both Arctic Cat and Yamaha had been telegraphing their partnership intentions long before the official announcement in February. Shame on us for being too close-minded to see them!

Makes me wonder what future products, relationships and directions Arctic Cat is hinting to us today, but that we’re not seeing and/or hearing?

I FIGURED OUT HOW TO ADD A NEW STORY – WELCOME!!!