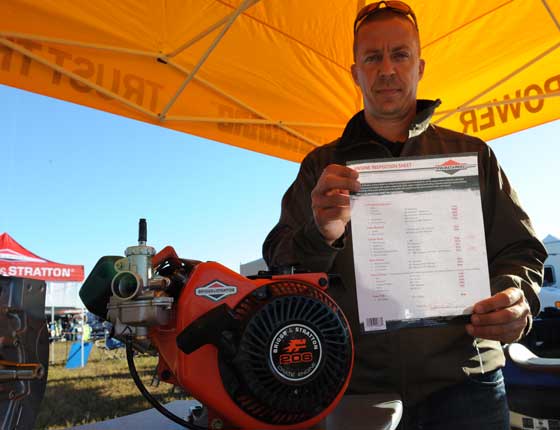 Displaying at the Sno Baron’s Hay Days this year was the iconic engine manufacturer Briggs & Stratton. The guy in the photo is David Klaus, Briggs race engine director.

The 206 engine isn’t actually new. It’s based on an engine with 12 years of racing history, and has been used in 206-form for cart racing since 2009. But 2013 marks its debut in snowmobile competition, as it’s been approved for use in USSA, MMSRA, KC Pro West and by ISR. It will be used in two newly-named classes, Semi Pro & Pro.

So what is it?

It’s a complete engine that bolts into any of current crop of 120-class snowmobiles, including all years of the Arctic Cat 120 (see below).

The 206 is a spec engine with a sealed crankcase, spec exhaust pipe and 6100 rpm rev-limiter. This is important because is seriously “levels the playing field” of mod-class 120 racing because all 206 engines are identical (and if a seal is broken, it’s visible). This not only prevents the winner-by-virtue-of-dollars-spent scenario, it also eliminates the prospect of cheating the engine rules.

Just as important, the upshot of this level playing field is that the cost to go mod-class racing just went down by several Ben Franklins. Cost for a complete engine with spec pipe/muffler, throttle cable, recoil and paperwork is about $675 U.S. 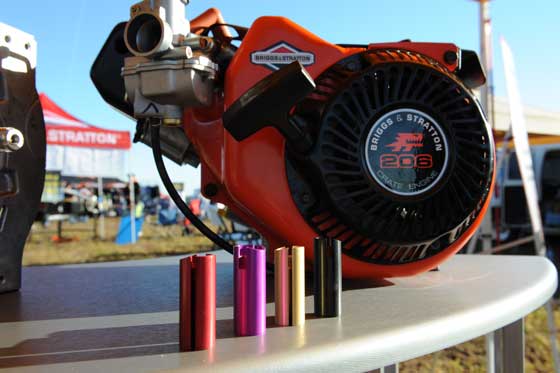 Furthermore, Briggs offers four different length carburetor slide options (shown above) for the 206, with a corresponding increase in performance with each. This provides a simple, inexpensive “ladder” for increased racing performance. Each slide is also color-coded for easy tech.

*It’s not designed to replace the ultra-modified Champ class of 120 racing. Nope, Champ remains for those who like to seriously dent their wallet.

*With simple maintenance, an engine will last for more than one season before the need to rebuild. When it’s time for a rebuild, a complete factory-sealed short block is available for less than $300, which is less than a typical rebuild. 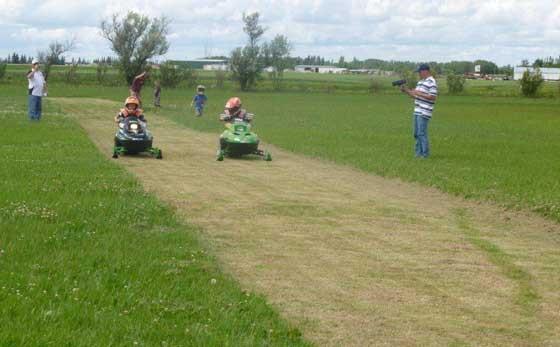 *Testing of the 206 engine has proven its consistency, ease and incremental increases in performace for each carburetor slide.

For retail information, go HERE to Recreational Motorsports or HERE to 4 Cycle Central.