Buy a brand-new Arctic Cat 6000 or 8000 Series snowmobile and on it’s first ride you want to see how much wood is in the fire, right? So you slam the throttle to the handlebar the first chance you get, right?

Right. Which is why you’ll be rewarded with decidedly tame acceleration and top speed. In fact, your buddy on the 3-year-old 600 will blow right past you.

Arctic Cat engineers definitely understand our desire to pin the throttle to the bars. Consequently they programmed all C-TEC2 engines with an automated Break-In Function to protect us (and the engine) from such tendencies, and to ensure the best possible performance and durability for the engine’s lifetime. The downside is that we have to suffer the pain and humiliation of getting beat by our buddies for what seems like an entire winter, but is in fact just 18 minutes on the short end and less than six hours on the long end.

There are two stages, or durations, that provide the optimal break-in controls.

4% additional fuel in the fuel/air mixture

This first stage is pretty obvious to most riders because of the RPM limit and the very rich oil ratio (the purpose of which is to drive out any air bubbles that may be trapped in the system from transportation, dealer prep, etc…).

(There is no RPM limiter)

The second stage of break-in will be noticed by some riders, but not all.

After Stage 2, the engine automatically reverts to its full capabilities. That’s when you start beating your buddy.

Prior to model year 2019, throttle position was one of the variables that affected the duration of Break-In Function, which resulted in a longer Stage 2 duration for some riders. Arctic Cat removed this variable for 2019. 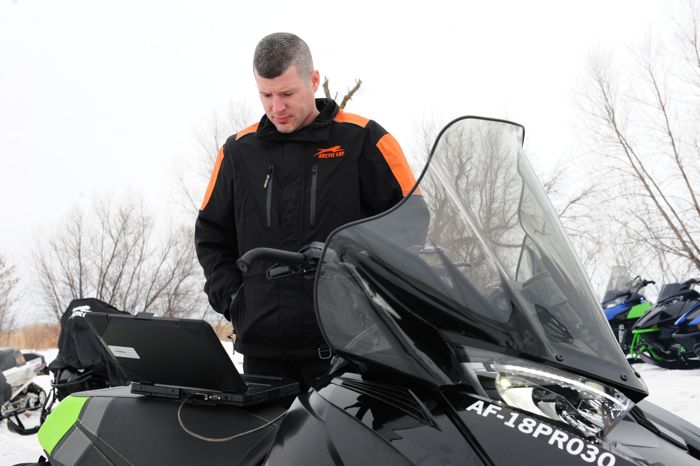 When I talked with Ryan Hayes (above), Powertrain Manager for 2-Stroke Development/Calibration at Arctic Cat, he said that testing done in the lab indicates that it’s possible for some engines to continue to “break-in” (meaning the time it takes for various engine components like pistons, rings and cylinders fully “seat” or wear) for up to 10-12 hours of operation, due to the natural variation in parts and duty cycle that any singular engine may have or encounter.

To be clear, the engine isn’t being controlled via the ECU any differently from 6 to 12 hours, rather it simply takes upwards of this many hours for the engine components to fully wear-in (READ THIS for additional background).

If you’re wondering, the 3000, 7000 or 9000 Series C-TEC4 engines that power Arctic Cat snowmobiles do NOT have an automated break-in function (owners should follow the recommendations outlined in the Operator’s Manual). Because of the increased number of moving components in a 4-stroke engine, most riders will see increased performance once these engines are fully broken-in.