The Top Racers and Teams in all Forms of Competition

With a powerful, refined cadre of 2011 race sleds on which they’ll ride,, a legendary crew of Team Arctic racers are primed for another victorious season of snocross, cross-country, hillclimb, oval and drag racing in 2010-2011. The stakes are high, and the winning bet is on these accomplished racers whose triumphant legacy is unmatched.

“We’ve put together what we believe is the best overall race program in the sport, comprised of the strongest racers, most experienced crews, top-level sponsors and a fleet of snowmobiles that proved to be the best last season, and that have been further improved for 2011,” said Mike Kloety, Team Arctic Race Manager. “I predict another record-breaking season.”

More than any other team in the sport, Arctic Cat is committed to supporting top-tier and grassroots racers, circuits and disciplines for 2011.

“We’re pumped up to have the very elite racers in a few circuits, because they’re great representatives who win the big events,” said Kloety. “Yet we’re equally proud of our regional racers, and those who compete in some of the less-publicized forms of racing.

“Arctic Cat has always committed itself to racing success, on every level, in every form of competition and across North America. It’s in our blood, it’s who we are and it’s why we win more than our share.”

Snocross: More Championships on the Horizon

There is no denying the winning formula for the Team Arctic Snocross program which, for 2011, looks like a sure-bet for championship domination.

The Arctic Cat Factory Team will consist of second-year Pro Dan Ebert, who last season won the famed USCC I-500 cross-country and scored multiple podium finishes in snocross. He’ll be joined once again by Semi-Pro Cody Thomsen, who last season won several finals and finished second in points, and fellow Semi-Pro Kyle Pallin who also stood atop of the podium on multiple occasions last year. The factory team will once again be managed by Russ Ebert.

Once again, Christian Bros. Racing (CBR) will field the largest private team in the industry, and with an added emphasis on cross-country. Pro riders will include perennial podium finishers Garth Kauffman and Ryan Simons, now joined by last year’s Semi Pro points champion, Logan Christian, who has made the jump to Pro. Zach Pattyn returns again in the Pro class, as will Cory Davis when he recovers from an off-season injury. And Carly Davis will compete in the Pro Women’s class at select events.

All Terrain Cycle Racing is Team Arctic’s Canadian contingent, with Dustin Vandrie and Katejun Coonishish in the Pro class, Sean MaCauley and Shawn Elmhurst in Semi-Pro, Wakenda Peters in Pro Women, and Joe Peters in Junior.

Cross-Country: Comprehensive Support at all Levels

Brothers MotorSports is back on green again this season, with Pro Ryan Huston, Ryan Greening in Semi Pro, and Coltan Vandeputte in the Sport 85 classes.

Joining them will be several dozen racers in all USCC classes.

Legendary Iron Dog champion Scott Davis is ready to team up with his son Cory to tackle Alaska’s famed cross-country event. They’ll be joined by Todd Palin/Eric Quam along with many other AC Teams in an attempt to notch Team Arctic’s 12th win out of 27 editions of the famed event.

Hillclimb: The Kings Remain the Same

Year-after-year, the fast, fearless crew of Team Arctic Hillclimb racers has proven all but unstoppable on the slopes of Snow King in Jackson and every venue of the RMSHA mountain circuit. Families like the Tapios, Zollingers, Tuppers, Frisbys, Archibaulds and Frees are joined by Buckallew, McClure and others for a mountain-topping tour de force aboard the highly refined M Series snowmobiles. 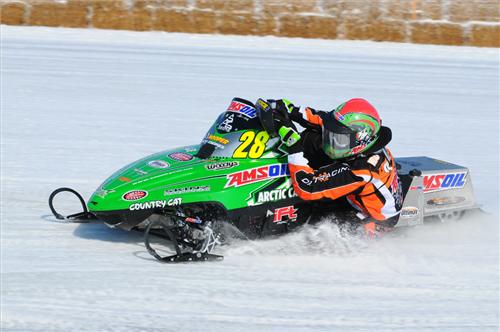 Last season Cadarette Racing’s Troy Dewald and Jeff Leuenberger put Arctic Cat atop the Soo 500 enduro for the first time in 42 years, breaking a hex that had jinxed the win on numerous previous occasions. It was a historic moment for the team and racers, and they’re back in 2011 to defend their historic win.

In oval race, Team Arctic is represented by the always-amazing, three-time World Champion P.J. Wanderscheid, as well as the emerging and youthful powerhouse, Hoglund Racing.

Team Arctic’s drag racing program continues to highlight the indomitable power of the 800 H.O. engine and the steadfast preparation of sport’s best racers. Whether it’s setting world speed records aboard the Z1 Turbo, winning the biggest grass drag events or dominating the winter ice, names like Hall, Shilts, Howard and others remain the backbone of the team’s straight line effort.

Team Arctic’s success on and off the track is made possible in part because of the strong, loyal support of its sponsors, each of whom shares the same passion as our racers and Arctic Cat.