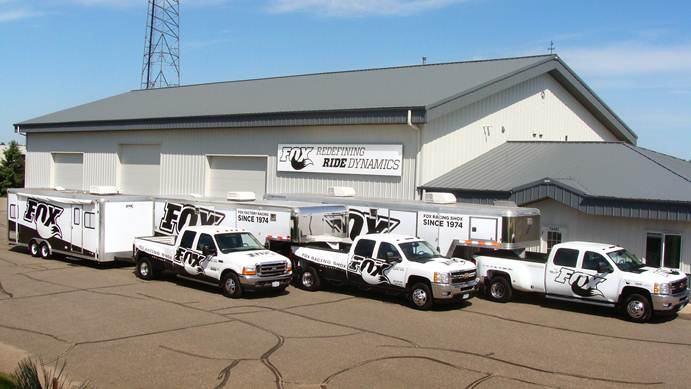 Last week I spent the afternoon at the FOX Midwest Center at their new location Baxter, Minn. Well, even though they’ve been in Baxter for more than a year, it’s new to me since the LAST TIME I WAS AT FOX.

FOX is one of those companies that I’ve always kept in close contact, in part because (I believe) they make the best shocks and also because the people there are full-gas off-road enthusiasts. There’s an energy and forward motion with FOX that feel whenever I’m around these guys, and that I believe gives the company its technological edge.

I use FOX shox on my full-suspension mountain bike and on every Arctic Cat I own, including my vintage el Tigre. And when I launched this website, FOX was one of the first companies that I wanted to have an ad, because I believe in the quality of their products and service. Yep, they sponsor this place and I’m damn proud of it.

If you’re an Arctic Cat rider over the past 20-plus years, you know FOX has been integral to the suspension performance for most of that time (I plan to do a historical perspective on FOX in the coming months). Arctic Cat was the first snowmobile company to equip a production snowmobile with FOX shox (the 1990 EXT Special).

It used to be that FOX was a California company that supplied the snow industry, but that changed a handful of years ago when it opened its Midwest Center and hired a core group of experienced people to service shocks and be at the big races with service/tech support.

The success of that program led to an outgrowing of their previous digs. Hence the new Baxter location in which seven full-time employees go full-throttle on OEM shock testing & development; race support; consumer service/upgrades/tuning; as well as sales and marketing. They do this for snowmobiles, ATVs and UTVs.

One of the seven people is FOX marketing honch Jeff Gruhlke who, after laying out the red carpet, specifically asked me not to include a pic of him standing in the FOX lobby. No problem, Jeff!

Gruhlke is a former snocross and cross-country racer who graced the Team Arctic program before calling it quits prior to completely destroying his body. Now he does some vintage oval racing as well as dabbling in mountain bike racing. 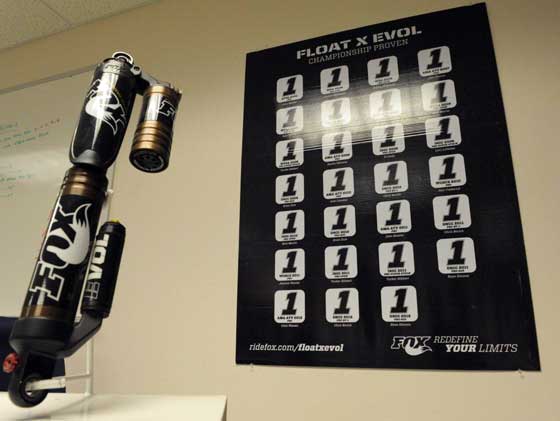 As you might expect, there are lots of posters and displays at the Baxter location, including a high-end FOX EVOL X shock and a poster highlighting most of snowmobile and ATV race championship titles by people using their shocks.

NOTE: At the end of this post we’ll do a little trivia contest about this poster’s contents. 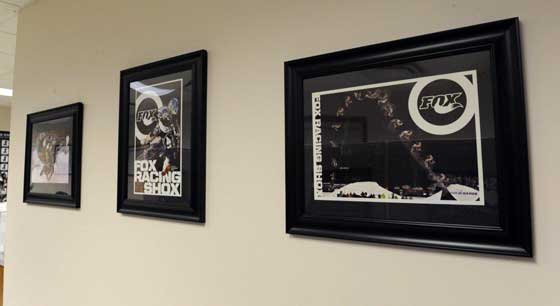 Other walls have Tucker Hibbert and Levi LaVallee posters. Tucker’s dad, Kirk, was a key factor in connecting FOX with Arctic Cat back in 1989-90. Kirk had been racing FOX shocks on his sleds in the old Rocky Mountain circuit and recommended that Cat use them on the 1990 EXT Special. 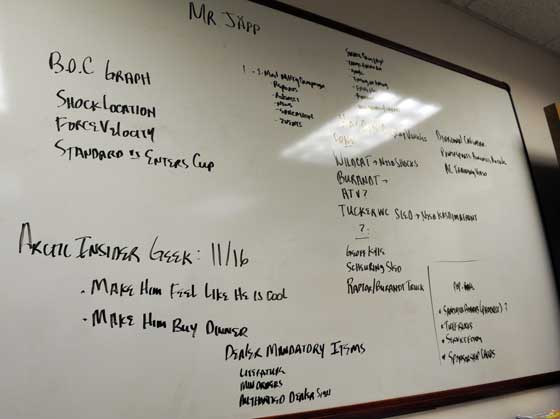 While the office area has some marketing eye-candy, it’s the service shop where most of the magic happens.

It’s here where the service staff spend their days services all kinds of FOX shocks, doing everything from the basic oil/recharge/inspection to THESE FULL UPGRADES including the EVOL Upgrade (a $350 package that adds the EVOL air chamber on Float and Float 2 ski shocks that come stock on most Arctic Cat Sno Pro machines) as well as the Kashima Upgrade (a $250 upgrade which adds the Kashima-coated elements to the Float X EVOL shocks that come on the Arctic Cat RR). 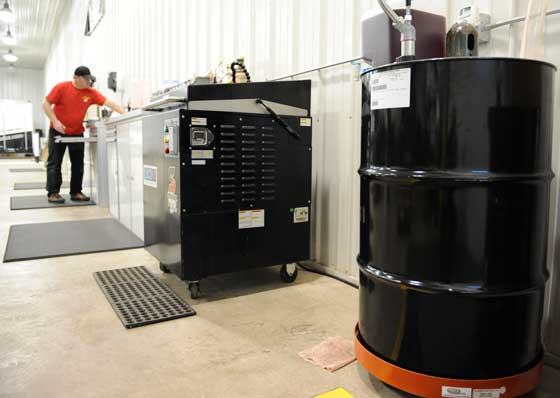 At this time of the year, these guys are servicing upwards of 350 shocks each month, hence the need for a lot of shock oil.

A steady stream of shipping means shocks move in and go out with great frequency.

If you’re planning to have FOX service your shocks, here’s a tip: Download THIS FORM FROM THE FOX WEBSITE, fill it out and send along with your shocks to ensure the fastest and most effective service. 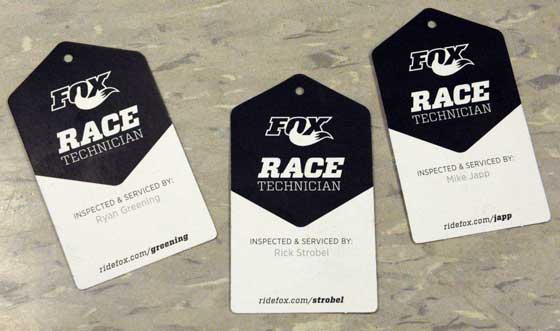 These tags represent three of the four techs (Ryan Greening, Rick Strobel and Mike Japp). I couldn’t steal a tag from the other tech, Randy Karpik.

In addition to servicing and upgrading shocks, you’ll find these guys at most ISOC snocross, USXC cross-country and GNCC ATV races each weekend, working their race support trailer and helping all Fox-equipped competitors.

To a person, everyone who works at the Midwest Center has raced or been heavily involved with a race team prior to joining Fox.

I’m convinced it’s FOX’s focus on race support and development that further separates this company from its competitors, and that results in better consumer products for the rest of us. The closer to racing that a company positions itself, the quicker the development and testing of its product.

Here’s Rick Strobel, holding a shock that would receive a Kashima upgrade and be sent to the top Polaris cross-country team, despite that brand’s affiliation with Walker Evans. I think this says a lot about FOX, when racers whose sleds come equipped with Walker Evans pay a thousand bucks for a set of competitive brand shocks.

In addition to servicing all recent model FOX shocks, the Baxter center can service (oil, seals and recharge) older-generation FOX shocks, including those from the 1990s.

On the bench at FOX this day were EVOL X units of Team Arctic Factory snocrosser Cody Thomsen (foreground) and Christian Bros. Racing/Arctic Cat cross-country hard-man D.J. Ekre. Both sets were here to get the Kashima upgrade.

Okay, that’s the tour of the (sort of) new FOX Midwest Service Center. Thanks for reading.

This poster highlights 27 different racing High Point Championships in ATV and snowmobile racing that FOX athletes have captured since 2005.

There are 15 different snowmobile championships represented on this poster beginning in 2006. Nine of these championship titles were captured by four different Team Arctic racers.

The four Pro Arctic Cat racers featured on this poster have either won a USCC Pro 600 Championship, or a WPSA or ISOC Pro Stock or Pro Open championship.

The first person who names them wins the FOX gear package below, containing a bicycle jersey, T-shirt, water bottle and decals, all courtesy of FOX. 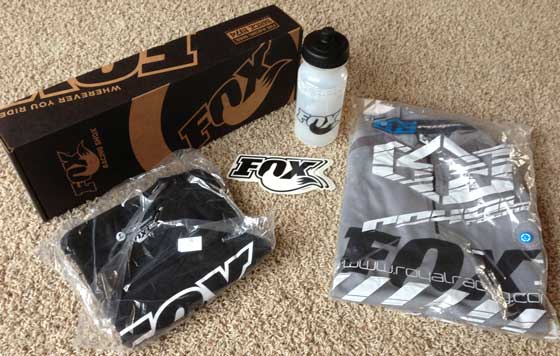