May 2013 Trip Report: What I Saw at Arctic Cat This Week

A couple of days spent at Arctic Cat this week confirmed there’s great things ahead for the people and machines that move us along the trail of life. 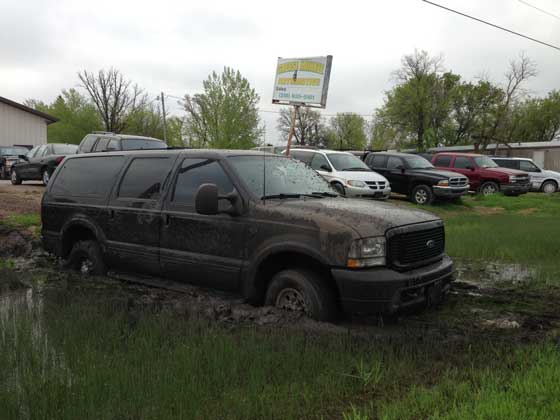 The drive up to Thief River Falls always produces some visual highlights. One on this trip was this sight in the town of Mahnomen, Minn., where the ditch bangers also find their groove in the summer. 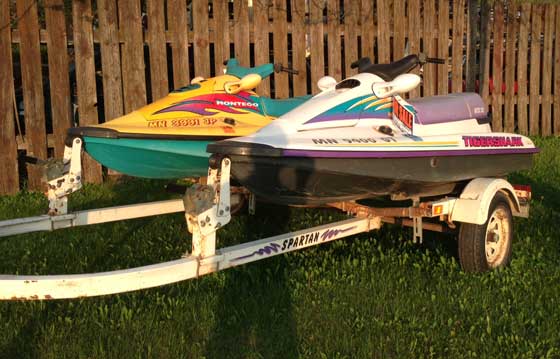 In TRF, I spotted a couple of Arctic Cat Montego Tigersharks for sale. $2,500 gets you the pair (and trailer) and a lifetime of great memories. FYI that I get a 15% finder-fee for anyone who reads this and buys the machines. 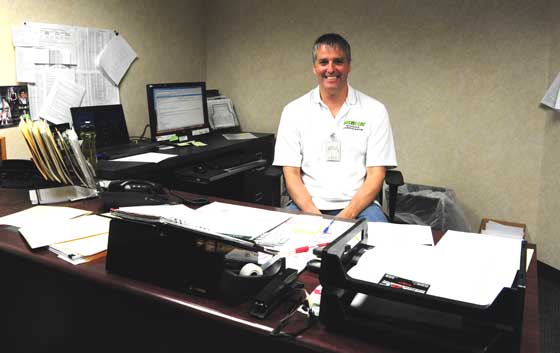 Inside Arctic Cat, I stopped by the Parts, Accessories and Garments area to chat with few friends, including Tom Schaefer. Tom heads up a number of projects at Arctic Cat, and one that he was gung-ho to talk about is the new Arctic Cat C-TEC2 synthetic oil, as well as a batch of soon-to-come accessories for the Wildcat. 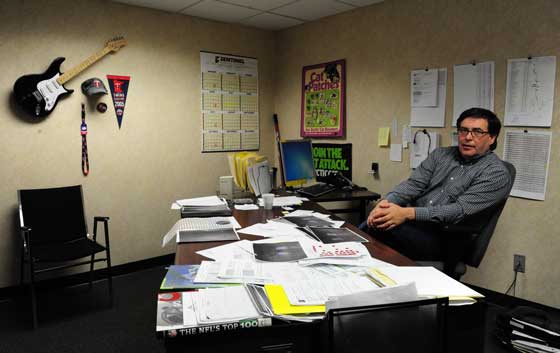 While in PG&A, I also stopped and talked with Tim Benedict, who talked about plans to bring more accessories to Arctic Cat machines. Unfortunately, I could not coax Tim into pulling the axe off the wall and giving me a rendition of the guitar solo in Freebird. Maybe next time, Tim? 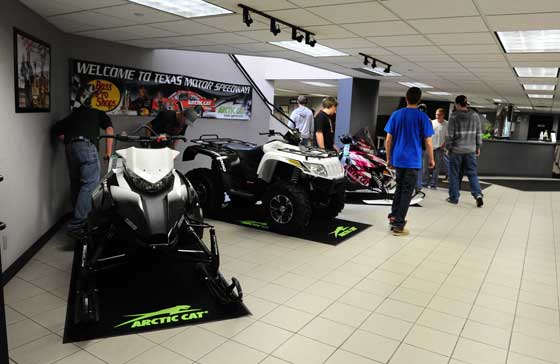 In the lobby a group of young men and women (half of whom were wearing SledNecks shirts) were swarming over the machines while they waited for the 1pm Factory Tour. If you’ve never taken the tour, I can only say DO IT. It’s awesome. 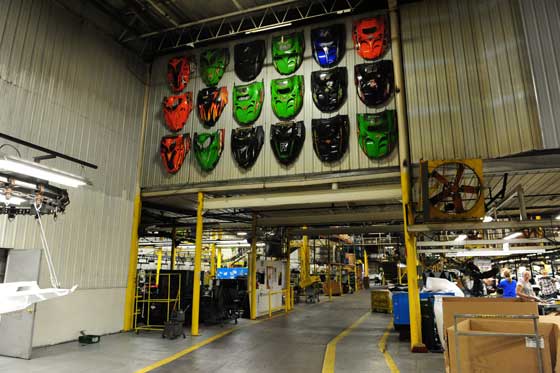 Inside the plant, the familiar buzz of moving assembly lines, welding, pneumatic tools and forklifts mixes with the odor of fresh plastic, paint and steel to welcome anyone with a love of manufacturing/assembly. 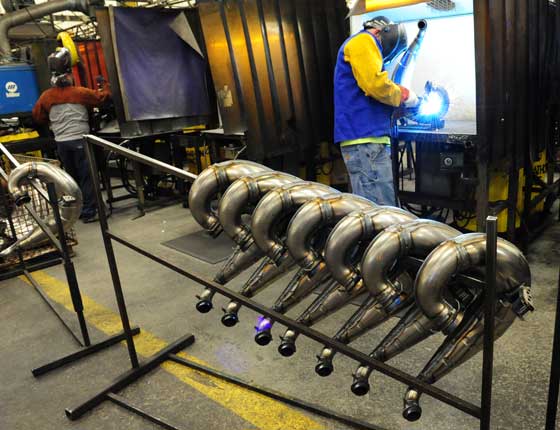 In the welding area, pipes were being built for the 800 H.O. engine. 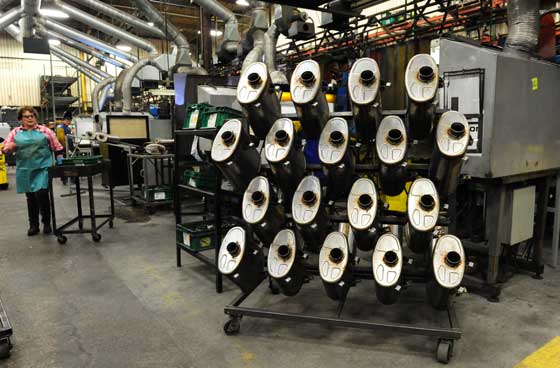 Nearby, similar welding expertise was occuring on exhaust mufflers. 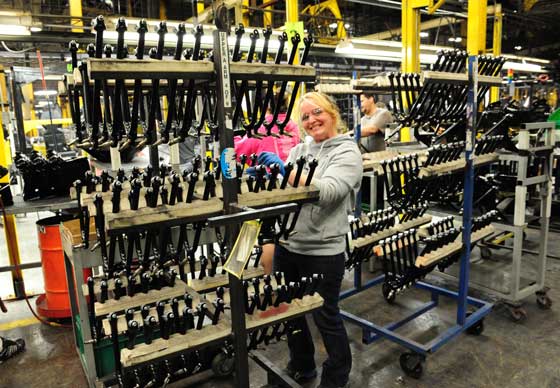 Lots of smiling faces as components — in this case A-arms — were readied for the line workers who assemble the machines. 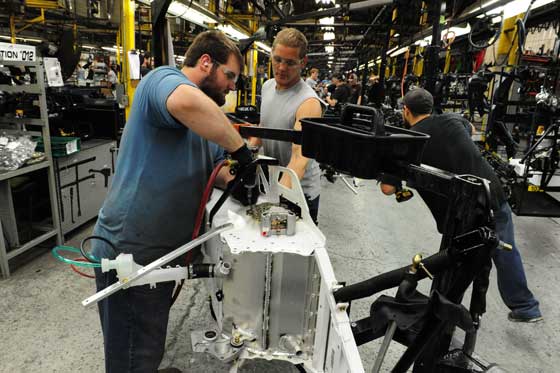 I never, ever tire of seeing snowmobiles, ATVs and side-by-sides come to life at Arctic Cat. Like I mentioned above… there’s a sound and smell to this process that, to my senses, is as warm, good and positive as any place on earth. These men and women are literally building peoples’ dreams, and to see it happen is truly a gift. 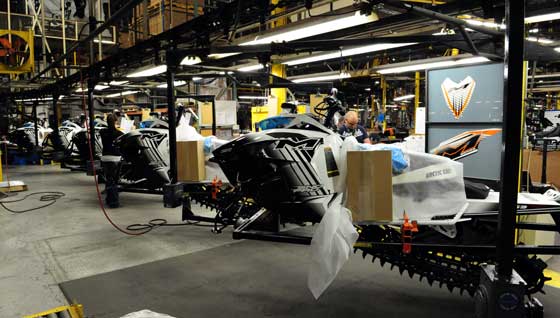 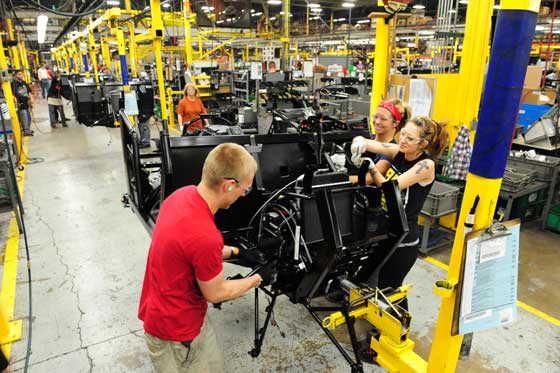 While the ATV line was experiencing a short break, the Prowler line was going strong. 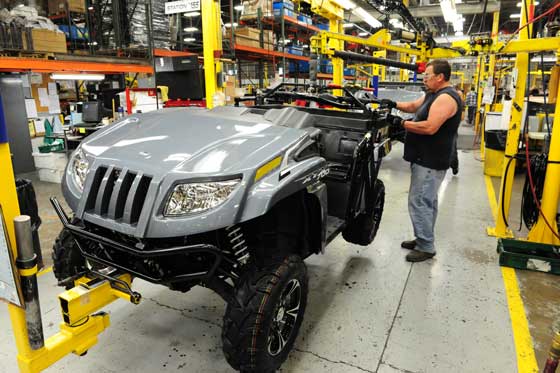 Seeing these Prowler 700 XTX models couldn’t help but make me think of that truck in the ditch outside of Mahnomen, and wonder how much more fun it would be to roost with one of these babies. 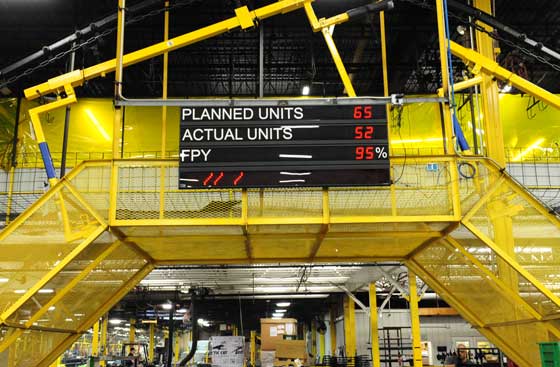 The sign indicates the planned number of Prowlers to be built this day, along with the number that been built at that point in the day. Nice job everyone! 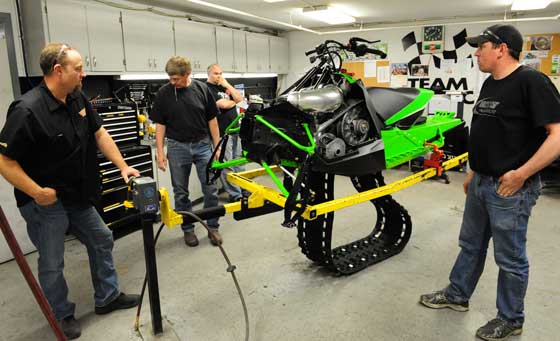 Detouring from the production area, I stopped by the Pilot Build room to see what the crew was assembling. Lo and behold, the 2014 ZR8000 RR Sno Pro!

These and other pilot built models are assembled by a small team of people with production parts about 30 days prior to full production, just to ensure that all of the components check out and that everything is ready. It’s one of many steps that helps ensure better-built machines. 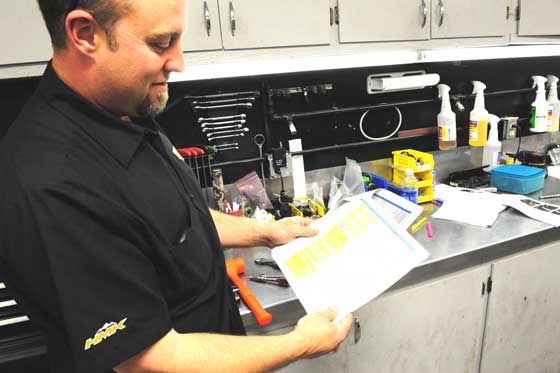 Here, Joe Lesmiester shows me the Bill of Material that indicates every single piece of the snowmobile, right down to each rivet and fastener. Similar paperwork shows the build sequence as planned for full production. These guys check off each item and follow the sequence as they assemble the pilot build. 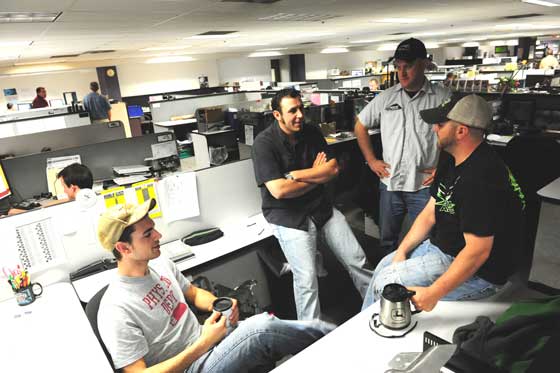 After checking out the F8000 RR and pretending I was capable of riding such a machine, I headed up to the Engineering department where I found one of the motliest group of hockey players, er, engineers I’ve ever seen. From L-to-R: Adam Krone, Ray Barthold, Mike Larson and Blake Schoh.

These guys were talking snowmobiles until I moseyed on by and brought up the subject of Arctic Cat hockey. 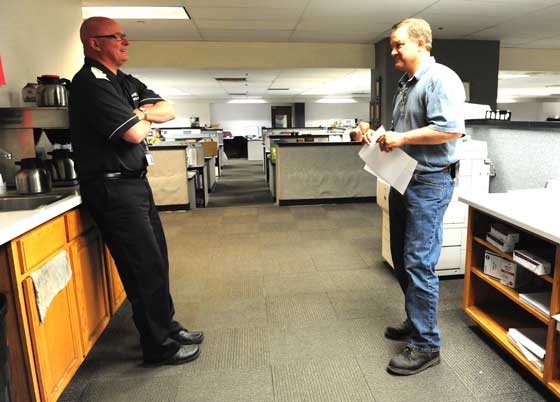 Two other guys talking snowmobiles were Snowmobile Product Manager Joey Hallstrom (L) and engineer Pete Mattison. Joey was talking about a recent work trip to Alaska where he and others were testing 2014 model Arctic Cat snowmobiles, while Pete was talking about the 10th 1979 Arctic Cat el tigre Cross-Country Cat that he and brother Gerry recently purchased for their continuing onslaught of vintage XC racing. 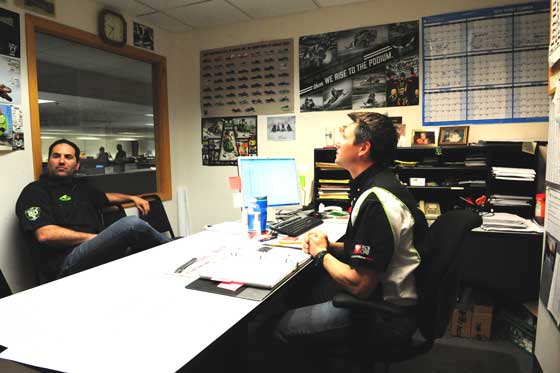 More serious discussions were taking place between Kale Wainer (L) and Troy Halvorson about the 2014 and 2015 Arctic Cat Mountain sleds. As the Engineering Team Leader for the mountain sleds, Troy had a lot to tell Kale (who handles marketing and media communications) as they prepare for the coming seasons. 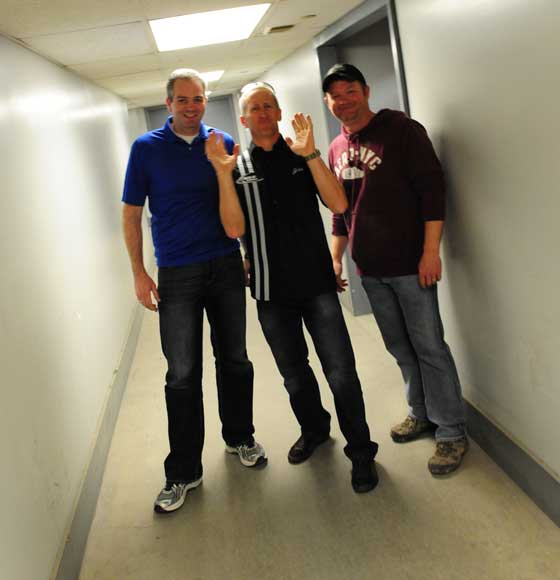 The reason this photo is blurry and off-kilter is because the guy running the camera is a whole lot better at riding/racing than he is running a shutter button. That guy is Brian Dick. The guys you see here are Mike Morris (left, ATV Engineering Leader) and Garry Homme (right, snowmobile engineering technician).

I’m the one in the middle, and my role is to tell fishing stories. 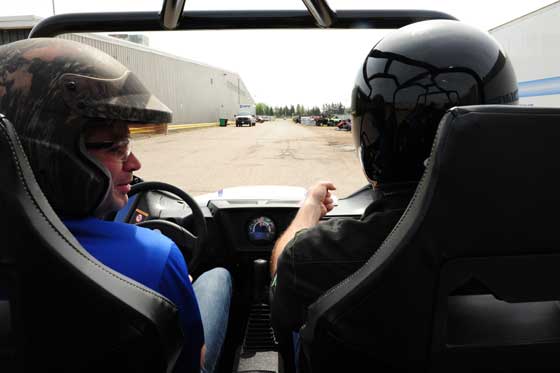 A few minutes after telling fishing stories, I was sitting in the back seat of a Wildcat 4 1000 as we rode over to another ATV/Side-by-Side Engineering building. It was a short trip and, though we didn’t tackle any obstacles, I gotta say that this four-seater is roomier than I expected, and with better sight lines from the back seat. 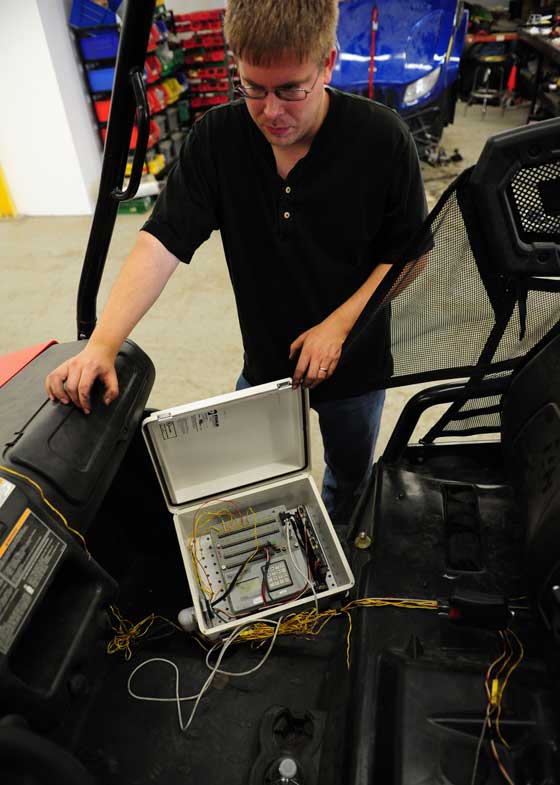 We were headed to meet this guy, Adam Kuiken, an engineer whose job is data acquisition for all kinds of testing purposes. I’m working on a story about this subject with Adam, and I’m really psyched about it because it’s a process of product development that is absolutely resulting in better machines and shorter development cycles, both of which are great for us riders. 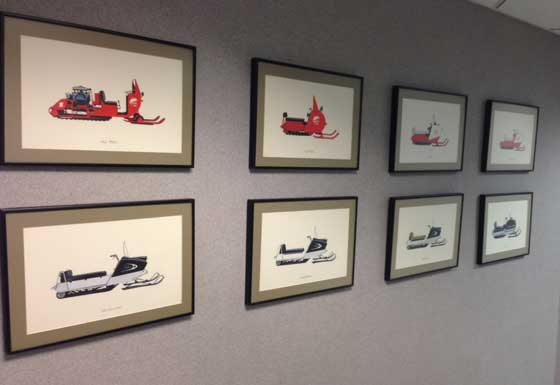 After meeting with Adam it was back to the main plant where I stopped for a moment to grab some images of the artwork, pictures and posters that grace various walls.

Some of my favorites are these framed drawings. 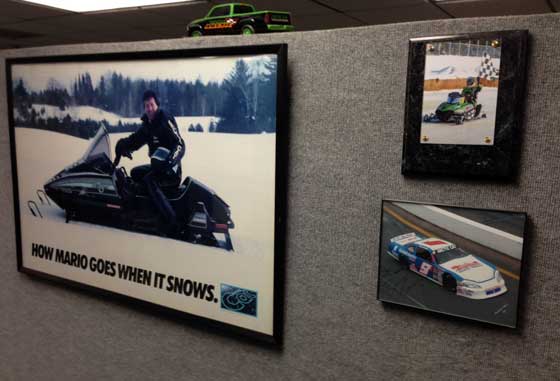 It’s good to see the great Mario Andretti still has a special place on the walls within Arctic Cat. 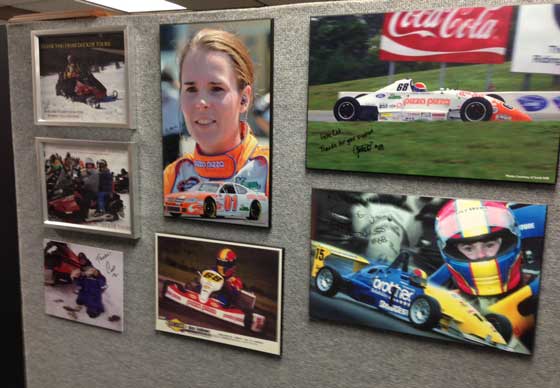 Arctic Cat continues to work with 4-wheel racers, albeit on a limited basis. 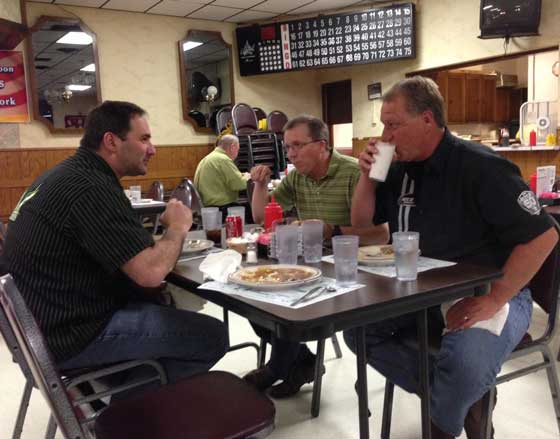 A quick lunch at the VFW with Kale, Prowler/Wildcat Engineering lead Mark Esala (middle) and Marketing Promotions Specialist Gary Nelson (R) gave me food for thought, as well as the satisfaction of an awesome hot beef sandwich (with mashed potatoes). The discussion this day was about the recent photo shoot of the 2014 ATV/Side-by-Side models that was coordinated by Nelson. 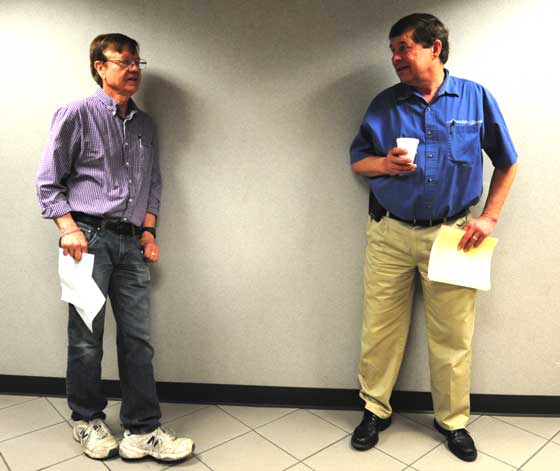 Back at the plant, I ran into two REALLY great guys who have given a lifetime of service to Arctic Cat, and who were discussing their retirements.

On the right is Brian Espeseth, whose last day is today. On the left is Dean Lawrenz, whose more than 40 years at Arctic Cat MIGHT end today, or might be continued after a summer of rest and relaxation (Dean can’t decide if he’s truly ready to be done, but I got the impression he was planning to come back to Arctic Cat at the end of summer). 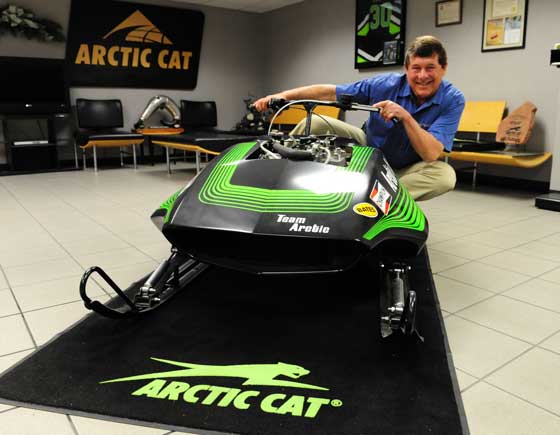 I told Brian I wanted to get a couple special photos of him, and his suggestion was a shot on this 1976 Arctic Cat Sno Pro 440X racer on display in the Arctic Cat lobby courtesy of collector/historian Brad Warning. It was a ’76 Sno Pro that Espeseth was given as an up-and-coming racer when he got his first job at Arctic Cat in 1975, and it’s a sled that brings back a lot of great memories.

Brian agreed to do an interview in the coming weeks, so there will be a lot more to say about him at that time. Brian has been a great friend over the years, and I’m really going to miss his handshake, smile and conversations that occur whenever we see each other. 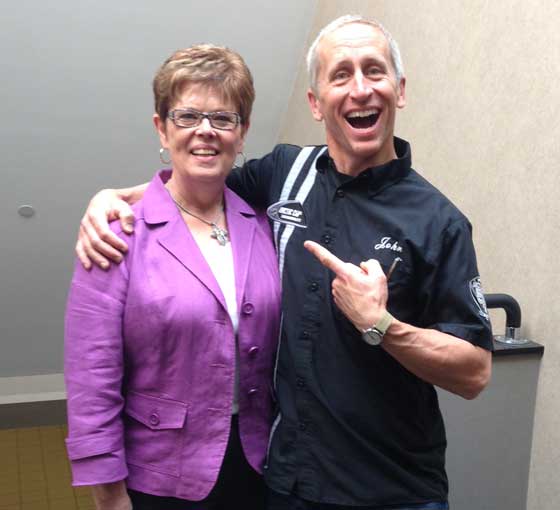 Brian (and maybe Dean) aren’t the only ones who will walk out of Arctic Cat today for the last time as an employee. Joining them will be Woody Cousins (Quality Manager), Lloyd Wagner (Shipping) and the amazing lady I’m pointing to in the above photo, Pam Cwikla (Marketing Coordinator), who I am going to miss dearly.

Each one of these people have worked for nearly four decades (or more) at Arctic Cat, and a book could be written about each one of them.

I think of the contributions they’ve made and the friendships they’ve forged while helping Arctic Cat become the company it is… and it gives me pause. I’m sad for sure to see these important people move to the next stage of their lives, but I’m also grateful for the hard-working and personable DNA they’ve infused into Arctic Cat.

I say this with the upmost sincerity and gratitude: Thank you Brian, Dean, Woody, Lloyd and Pam. You’ve helped build and grow the Arctic Cat dream.

And thanks to everyone else for reading.