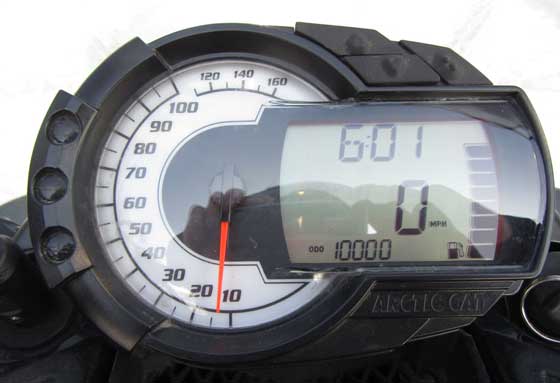 Some people ride a lot of miles on their snowmobile each season. A select few are able to really crank out the miles.

“Holy crapeth!” is what I said to the 59-year old farmer from Park River, North Dakota, when I asked him for an interview, and it’s what I’m still thinking.

See if you agree.

Ross is the guy on the left, captured in a rare moment when he wasn’t riding this past season.

AI: The last time we talked HERE you recounted your 658-mile day/7,250-mile season. Now you’ve gone ahead and ridden more than 10,000 miles in a single season… congratulations! How does this rank in comparison to all the years you’ve been riding?

AI: I’m blown away by how many miles that is! Take me through the basics of how you were able to do it.

Spoonland: I have the winters off from farming and could ride any day of the week, which I did. It worked well with a small core of riding buddies who had varying days of the week off from work.  If I couldn’t hook up with anyone I rode alone.  I have trail permits for North Dakota, Minnesota, Manitoba and Ontario so I had a large area to ride in. There were many trailer trips to various staging spots in the region.  I ended up doing 42 rides this season….just about all of it on trails.

Here’s the breakdown of  the 10,294 miles ridden by state/province: 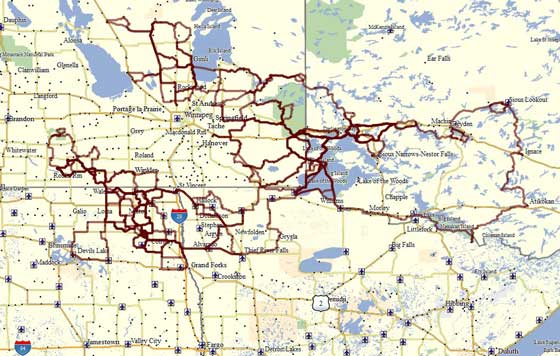 Spoonland: It wasn’t a preseason goal but as the season progressed and the snow stayed longer than usual the miles started piling on.  Mid March I knew 10,000 miles was going to show up on the odometer.

Spoonland: March 26 I did a 406-mile ride out of Warroad, Minn.  At first it was planned as a solo ride but late in the evening before ride day I emailed my friend Brad who has a cabin on Echo Bay up by Kenora, and who agreed to join the ride along the route. I was also texting with another friend Paul from Winnipeg while on my way to Warroad, who also said he’d meet me on the trail. I left Warroad at 9:00 am and headed up the lake trail to the Northwest Angle… reported into Canadian Customs on the remote phone at Young’s Bay and headed to Falcon Lake, Manitoba on the Can/Am trail. I met up with my two friends there and we headed to Kenora on the Ontario L101 trail. From Kenora we took the L102 (the famous “Pipeline Trail”) to just about Stewart Lake then got on the “A” Trail which looped back to Kenora. From Kenora back to the Northwest Angle on the “A” and L106 trails.  I checked in with US Customs on the remote phone and headed back across the lake to Warroad and was at the trailer at 9:15 pm. The route took us on some very nice trails. The “Pipeline” is a trail everyone should ride at least once. I guarantee you will come back and ride it again and again.

AI: What were the most consecutive days you rode?

Spoonland: Three… February 16-18 on an 800-plus mile saddlebag trip in Ontario.

AI: What kind of pace do you run, and how frequently do you stop?

Spoonland: I try to run at a speed that is appropriate for the conditions. There isn’t much stopping other than to get a bite to eat mid-day and stop for pictures and short chats every once in a while. Many of the ride days were 10 to 12 hours. Dividing my sleds miles by its hours yields a 35 mph average.

AI: Are all of your rides pre-planned routes, or do you sometimes just freelance a day’s route and go where the wind takes you, so to speak?

Spoonland: Most of the rides had a planned route although there were occasions they had to be altered along the way. I also made custom, routable GPS trail maps with all the snowmobile trails in North Dakota, Minnesota, Manitoba and Dist 17 of Ontario. With the GPS mounted on the handlebar, navigation was a breeze always knowing exactly where you were.

AI: Any sketchy challenges that occurred during the season?

Spoonland: No great challenges stand out, but a couple of minor predicaments come to mind: Trying to find crossings on some ice ridges on Lake of the Woods; and navigating some lakes off trail in Ontario in whiteout conditions….the GPS came in real handy.

AI: Was there any point during the season when you didn’t want to ride, but felt compelled to reach a goal?

Spoonland: No. All season long I was ready to ride at the drop of a hat and sometimes was out the door before the hat hit the floor. 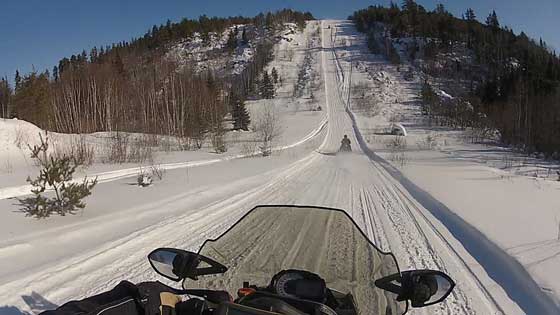 AI: Were there one or two highlight rides during the season that really stand out?

Spoonland:  The Feb. 16-18 saddlebag ride in Ontario was the standout ride of the year.  It was 800-plus miles in some very remote and scenic areas of Ontario. Five of us left Kenora heading through Vermilion Bay, Dryden, Sioux Lookout, Ignace, Atikokan, Crane Lake (Minn.), Fort Frances, Rainy River, the Northwest Angle and back to Kenora.  Out overnights were in Sioux Lookout and Atikokan.

AI: I saw the list of broken parts that occurred during the season HERE. Did any of these issues derail rides or trips that you’d planned?

Spoonland: The broken rear suspension front arm and the dead starter relay happened coincidentally at the same time near the end of a ride on the delta of Lake Winnipeg. I had to be towed about five miles back to the truck/trailer at my friend Raymond’s cabin.

The broken clutch cam bolt shortened a ride but I was able to limp it to a nearby town and then got a ride back to my truck/trailer and then went back to retrieve the sled.

The driven shaft and shaft bearing failure also shortened a ride but I got back to the truck/trailer. Unfortunately this breakdown also ended my season on April 1 as my dealer is waiting for back ordered parts. As of April 18 there is still a lot of snow here and in southern Manitoba so it has been hard to be sitting without a sled to ride.

I will have to say I have a pretty good dealer in Hamm’s Repair of Warren, Minn., that has fixed me up on several occasions having me in and out same day. 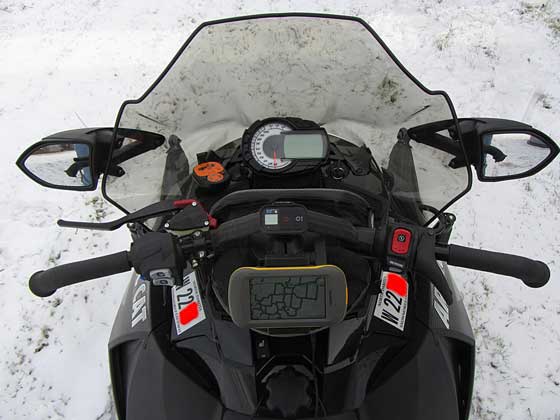 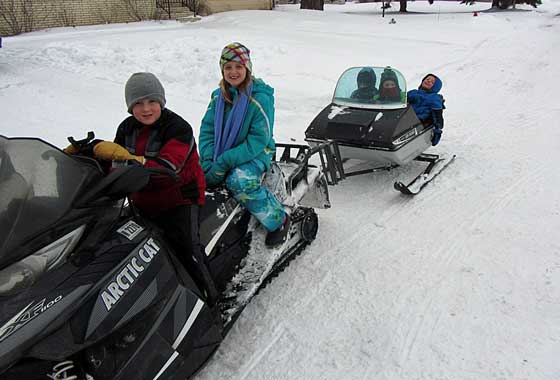 AI: Tell me about your 2013 Arctic Cat XF1100 CrossTour… any modifications or custom pieces you’ve added?

Spoonland: A Garmin Montana 600 GPS and a SPOT Satellite Tracker were the first two things I mounted on my machine. Then I added studs, heavy skid plate, ice scratchers, 4-wheel rear axle, pintle hitch (for pulling a vintage Kat Kutter), dually 8-in. carbides and removable saddlebags for overnight trips.

AI: How does the ProCross chassis compare with the Twin Spar when it comes to long-distance touring?

Spoonland: Coming off a 2010 Z1 Turbo EXT I was a little disappointed in the ride quality of the Cross Tour.  No matter how I adjusted the rear suspension I could not get the ride of the Slide-Action and TSL of the Z1.  Other than that the ProCross chassis was great.

AI: Tell me what you like about your sled as well as what you would change if you could?

Spoonland: What I like most is the great handling and rider position. The overall looks of the Cross Tour… when I first saw it I had to have it.

A couple of changes would be longer lasting clutches; Slide-Action/TSL suspension; chain case drain plug; and a hood that can be removed without the use of tools.

AI: Are you planning to get a new machine for next year?

Spoonland: No, I will be riding the same sled next season.

AI: What do you do for fun in the off-season?

Spoonland: The farming season is pretty hectic but I try to find some time to ride motorcycle, ride ATV with the grandchildren and do some shooting/plinking.

AI: I finish every interview with this question…Do you have a Roger Skime story to share?

Spoonland: No I don’t, because I have not met Mr. Skime. But have read some stories about him on ArcticInsider.

AI: (Laughs) Well I hope you get a chance to meet him, and I’m sure Roger would enjoy meeting you… and riding with you! Thanks for interview, Ross. I look forward to hearing more stories from you in the future. 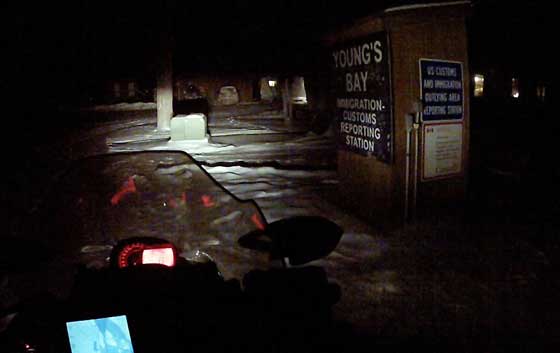 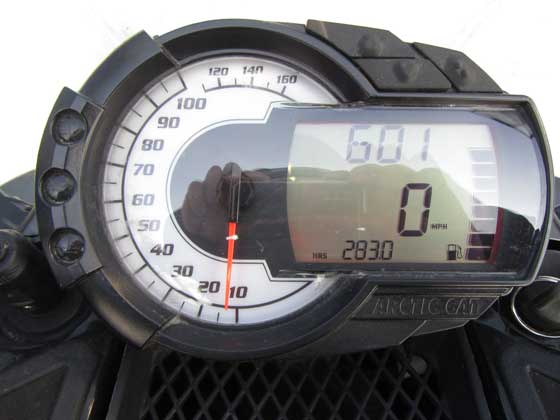