Arctic Cat just took the wraps off of its 2018 line of snowmobiles, and there’s a WHOLE BUNCH of new stuff.

Here are the 11 key things to know about it: 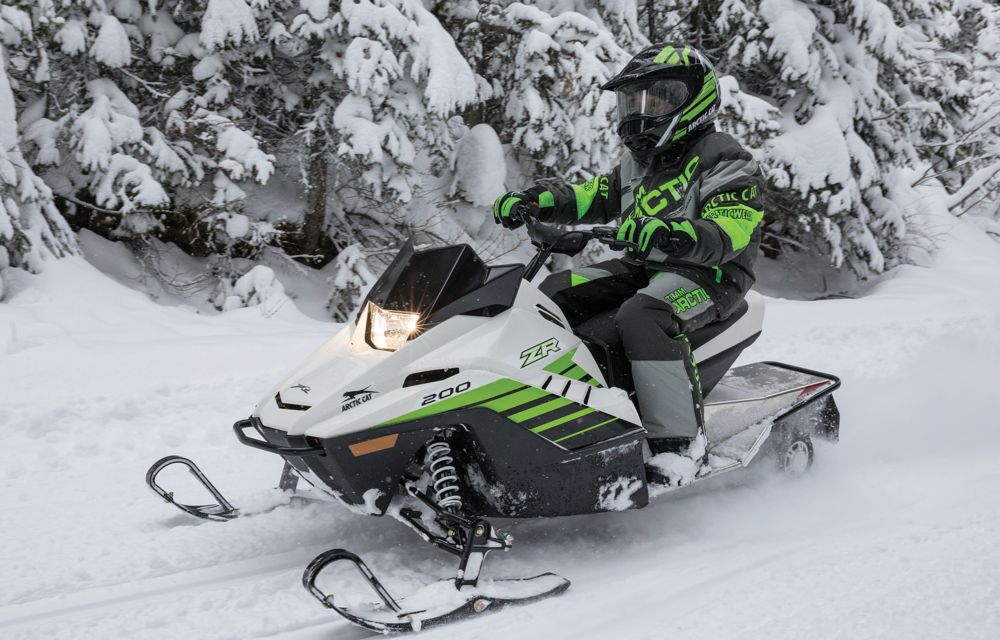 Youth riders rejoice: now there’s a “bridge” sled between 120s and full-sized snowmobiles! The all-new ZR 200 has a 9-hp 200cc Yamaha 4-stroke; a cool new Arctic Cat designed CVT system with the auto-adjusting/roller bearing design; lengthened chassis with coil-over shock equipped rear suspension; hydro disc brake; taller seat; longer 10 x 93 x 1.0-in. Cobra track; 2.2-gallon tank; and a 30.5-in. ski stance. This is a snowmobile that youth riders will have true fun riding on trails (it WILL be trail legal), in the trees and backyards/fields. Maybe just as important, adults can have a hoot on it as well! Plus there will be a bunch of cool accessories for it (and I suspect the aftermarket are going to have a field day building upgrades). Unless another brand introduces a similar model for 2018, I’m confident that the new ZR 200 is the single most important snowmobile for next (and future) year(s). 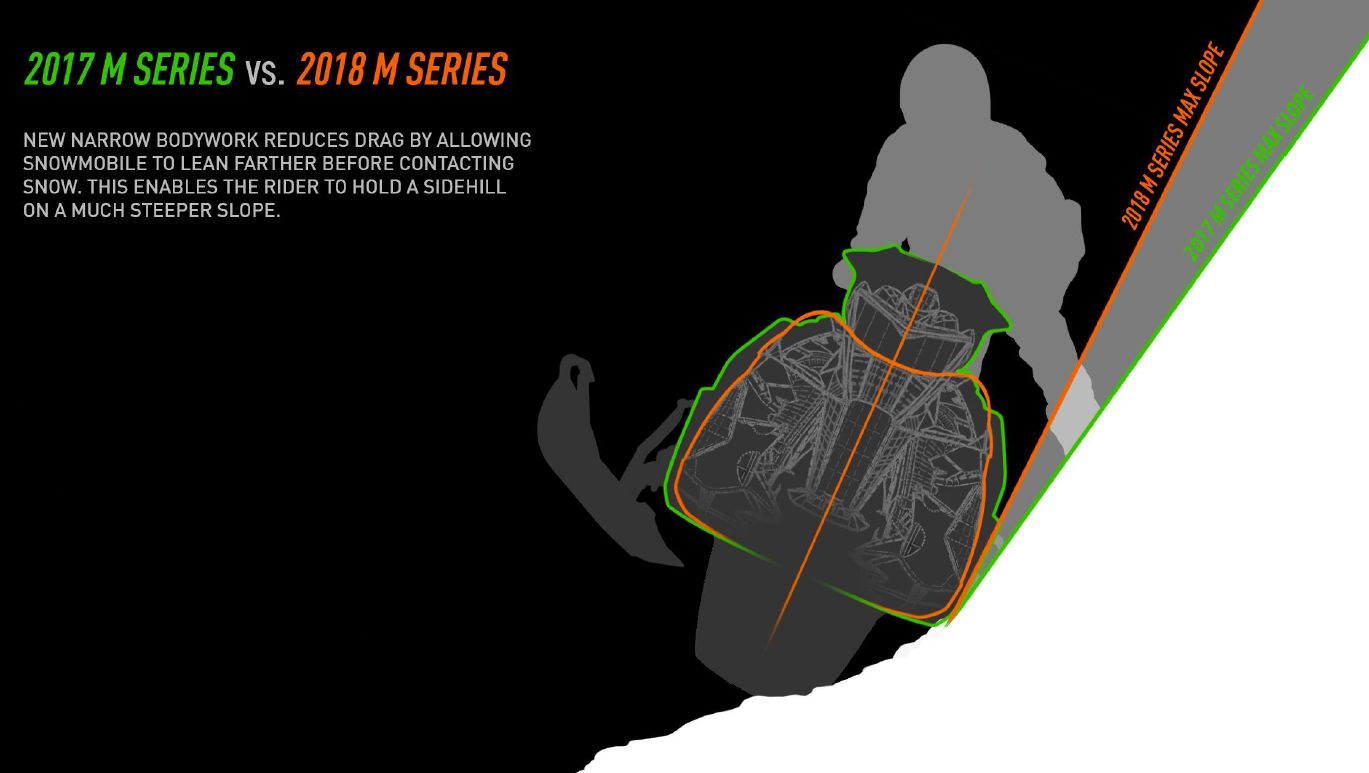 It’s been three straight years of serious improvement on the M Series machines, with 2018 getting perhaps the biggest upgrades that result in a 10-15-lb. weight reduction depending upon model.

* Body panels are 3-in. narrower (and 1-lb. lighter) which lets you carve deeper in the snow without levering off the panels;

* And a lightweight brake assembly that drops 1.3 lbs.

Plus all 2018 M sleds get the upgrades that came on the 2017 Mountain Cat (and which shed about 6 lbs.). These changes are referred as the Ascender Platform:

* A driveshaft that’s 1-in. lower and 0.75 in. rearward, which results in a flatter track-to-snow angle for improved floatability, quicker climbing on top of the snow while accelerating and improved handling. It makes possible the 3-in. lug track and 8-tooth drive sprockets;

* Revised running boards are 1-in. narrower for improved side-hill performance

* Thinner gauge aluminum on the rear tunnel, plus strategic cut-outs on the front tunnel section

Last year the Mountain Cat was the lightest M Series model, and now it sheds another 16 lbs. for 2018!

The year-over-year improvements to the M Series have made a HUGE impact. Read the media reports on the Early Release M 8000s, these machines are as good or better than anything else out there. They’re now the same weight as the Summits, and only 15-20 lbs. heavier than the RMKs, yet the M Series don’t shred to pieces if you smack a tree or incur a hard landing. 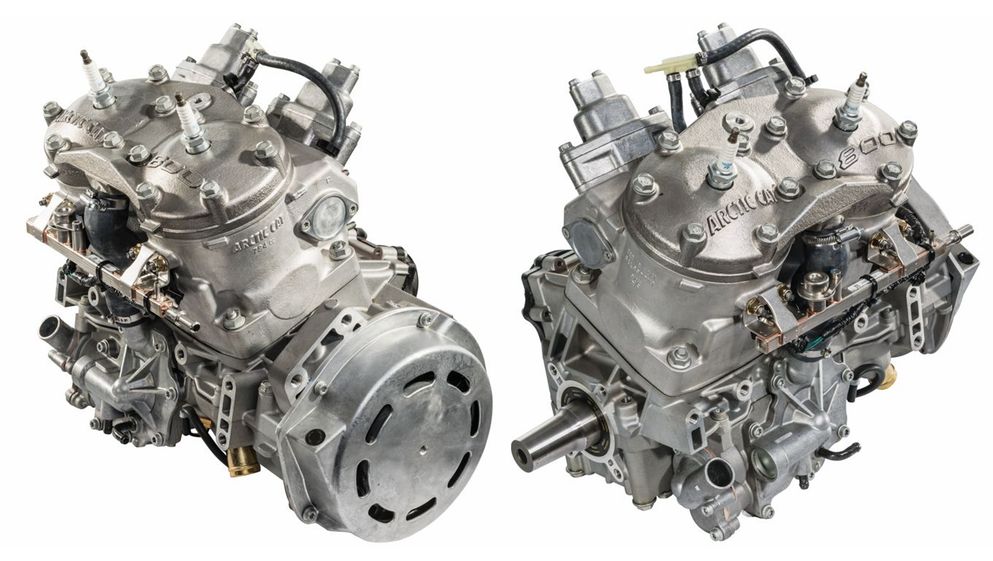 On the heals of the Early Release ZR and M Sno Pro models, it’s probably not a huge surprise that all 2018 8000-Series models will feature the new Arctic Cat C-TEC2 8000 engine with Dual-Stage Injection. As all the riders who have experienced this new engine are saying, it’s a sweet step up from the venerable Suzuki 800, with the big difference being a nice bump in low- and mid-range performance, as well as much lower oil consumption. Per Arctic Cat and compared to the Suzuki mill, the new Eight has a 36-percent increase in low-end torque (less than 5000 RPM), an 18-percent increase in mid-range torque (5000-6000 RPM) and 30 percent reduced oil consumption below 7000 RPM. 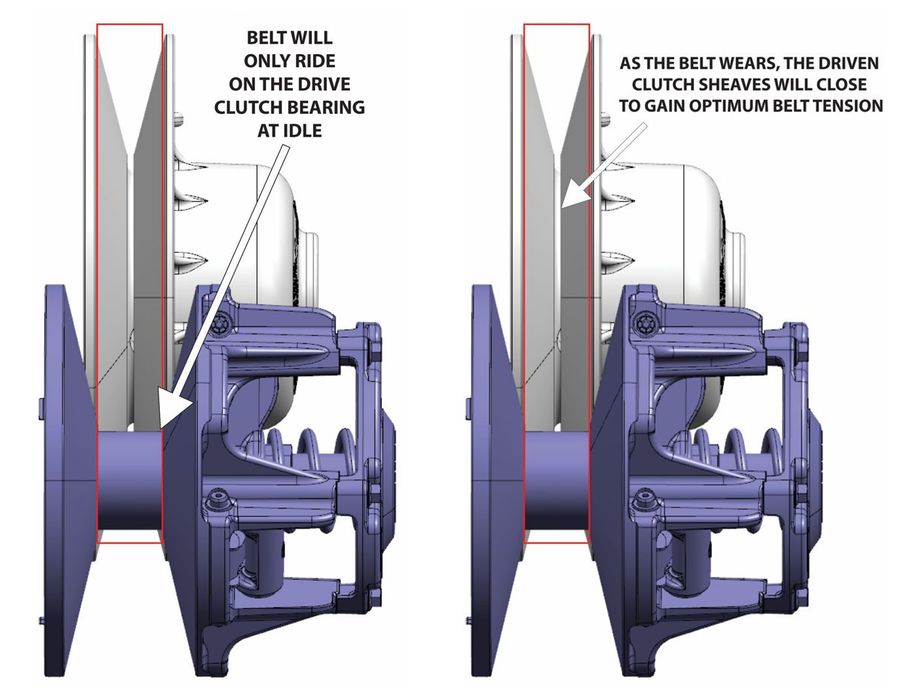 This drive system debuted on the 2017 9000 models, and now it’s nearly across-the-board for 2018. The idea is beautifully simple: a roller bearing on the drive clutch (that allows much tighter belt deflection without wear) and a driven whose sheaves can continue squeeze inward, means that we never have to adjust for belt wear. Plus, it’s ratio offers a 12.5 percent lower speed at engagement compared to conventional systems, allowing a smoother take-off and even less wear. Arctic Cat is calling it ADAPT, for Automatic Deflection Adjustment Performance Technology. I call it smooth, smart and hands-off. It’s on all 2018 6000/7000/8000/9000 models except the Bearcat 7000 XTs. An all-new FLOAT QSL rear track shock on the Mountain Cat and King Cat models is mountain twist on the popular QS3. The new QSL features 1-2-L compression settings that correspond to light, medium and “locked” calibration. In deep snow and technical conditions, the L-position prevents too much rear-arm squat and exaggerated ski lift, for greater control and improved backcountry performance. In addition to the QSLs, FOX QS3 are now available in the FLOAT package on ski and front track shocks for Mountain Cat models. Yes, it’s cool because it’s a new twist on style and, I’ll admit it, new bodywork is nice simply because it’s a change. But the real beauty of the new stuff is the quick, easy access for opening the side panels and hood. Improved airflow under the hood is one of those features that we don’t really notice, but that makes a difference. Now standard on all 6000/8000/9000 models.

Arctic gives us another cool and interesting do-it-all machine in the form of the Norseman. It has a 15 x 154 x 1.6-in. Cobra track with Xtra-Action articulating rear suspension; a nice rear rack (with a large platform for adding gear) with built-in pivot hitch; mountain handlebar; the wide 10/8 ProUte skis; and a rear bag. As the name suggests, it’s powered by the C-TEC2 6000 engine and joins the 3000 series option on the Norseman 3000. Arctic Cat has a lot of options for riders who want a machine that can do double-duty, this one that bends towards utility, but that can be trail ridden and pick through the trees/deep snow while going off-trail. It probably won’t be a huge seller, but it’s going to deliver huge smiles to those who want such a machine.

Add a 6000 C-TEC2 engine to the power options in the touring Pantera family for 2018. Remember, this baby has a removable 2-up seat with adjustable backrest and heated passenger grips; a massive rear storage box; outlet for heated shield; LED headlight and a window (with mirrors) that keeps the wind moving around the rider and passenger. It joins the 3000 and 7000 Pantera. Okay, so  only 1-in-500 people reading this care about the utility segment. For those of you who do, Arctic Cat brings the new Bearcat XT into its palette of choice for 2018 and featuring a 540cc fan-cooled twin with single carburetor; Hi/Lo tranny; TSS front suspension; 20 x 156 x 1.5-in. Cobra track; 37.8-in. ski stance; E-start and revers; ample under-seat storage; and a 400-watt output. Yes, it’s a rebadged Yamaha Viking. For 2018, the new CrossTour 6000 and CrossTour 9000 join the existing CrossTour 7000 in the solo-touring category. Seriously, if you’re into putting on big miles, the CrossTour package hits the sweet spot with 18.7 gallons of fuel capacity, a comfortably long 15 x 146 x 1.35-in. Cobra track wrapped around a SLIDE-ACTION rear suspension, mirrors, 14-in. mid-height window and heated visor plug-in. For those who like to log 300-mile days without the need for banging ditches, the CrossTour is an exceptional machine.