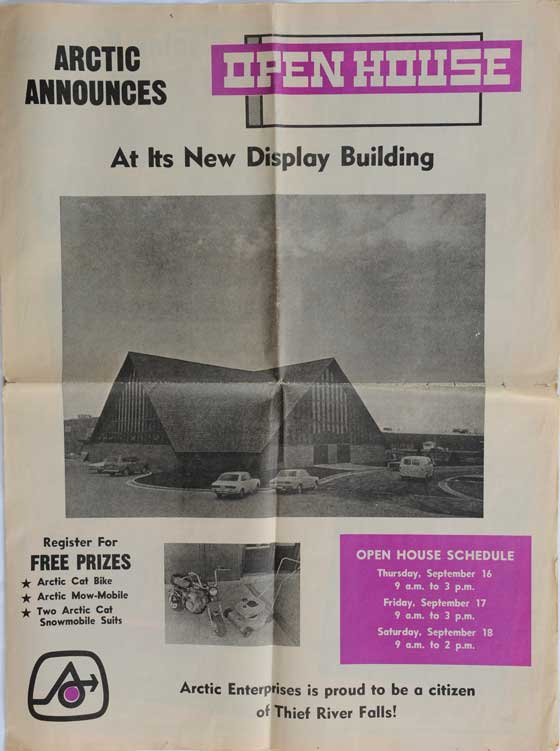 Upon the completion of the Arctic Cat display building in the summer of 1971, a special pull-out section commemorating the occasion ran in the Thief River Falls Times, the local newspaper. This is the cover page of that section. 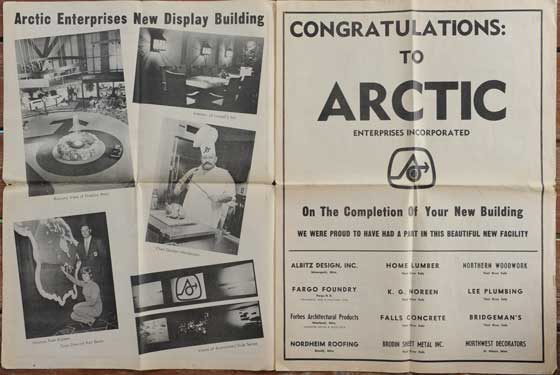 Inside there were a smattering of images of the building. 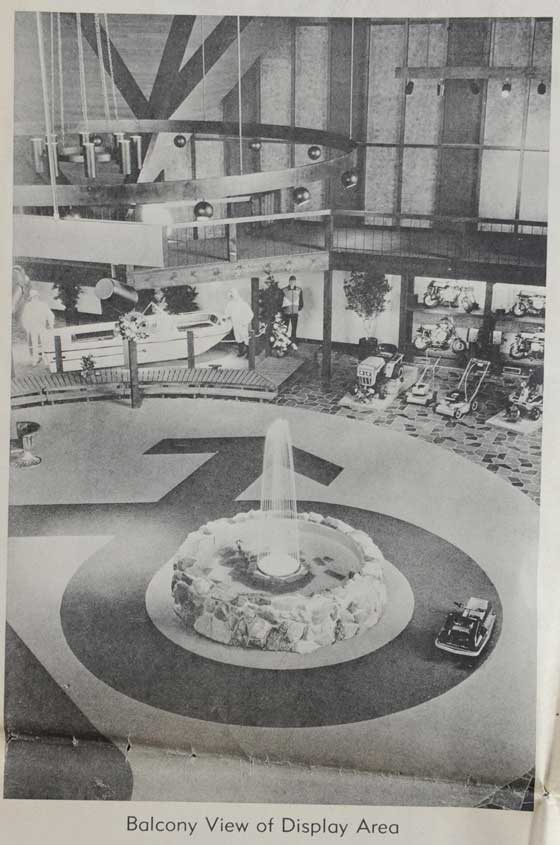 These were heady times for the snowmobile industry and Arctic Cat in particular, which was reflected in the sheer size and features of the display area.

For sure the extravagance was possible because sales were astronomical and showing no indication of arching downward. For instance, in 1971 Arctic Cat sold 34,378 Panthers! Consider this, that single model from one brand sold what would be about one-third of the total world sales from all brands in 2012.

Arctic Cat would sell roughly 77,000 snowmobiles for 1971, a number that seems unfathomable by today’s numbers. 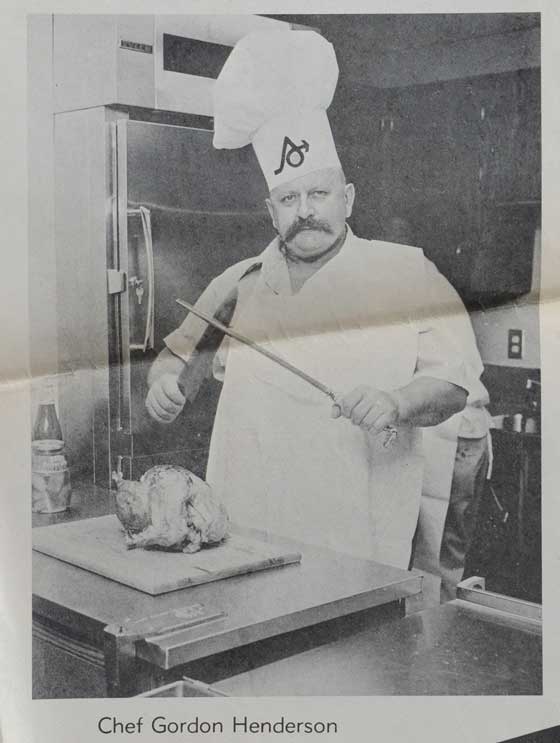 In addition to displays of the company’s products and a meeting room, the facility also featured gourmet food prepared by chef Gordon Henderson, aka “Inspector Henderson,” who would also be utilized as the company’s PR spokesman for safety. 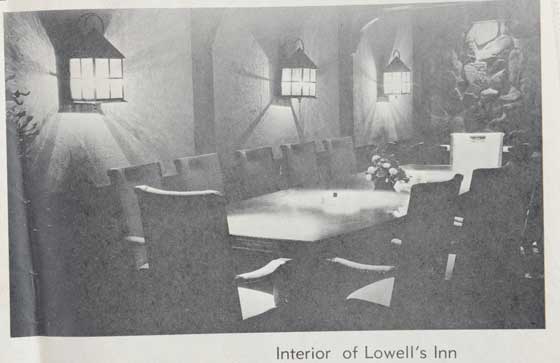 “Lowell” is Lowell Swenson, the Arctic Cat President/CEO of the time. I imagine the company management gathering in this restaurant/meeting area of the display building… cigar smoke wafting through the air… the sound of hearty laughter punctuated by the clinking of ice in half-empty tumblers of whiskey.

Who would have guessed that this would be but a fleeting moment in company history? 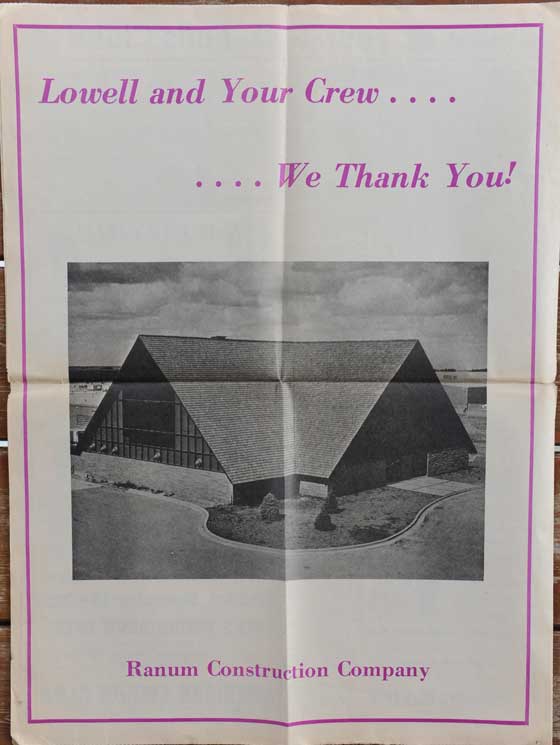 The back page of the newspaper section. 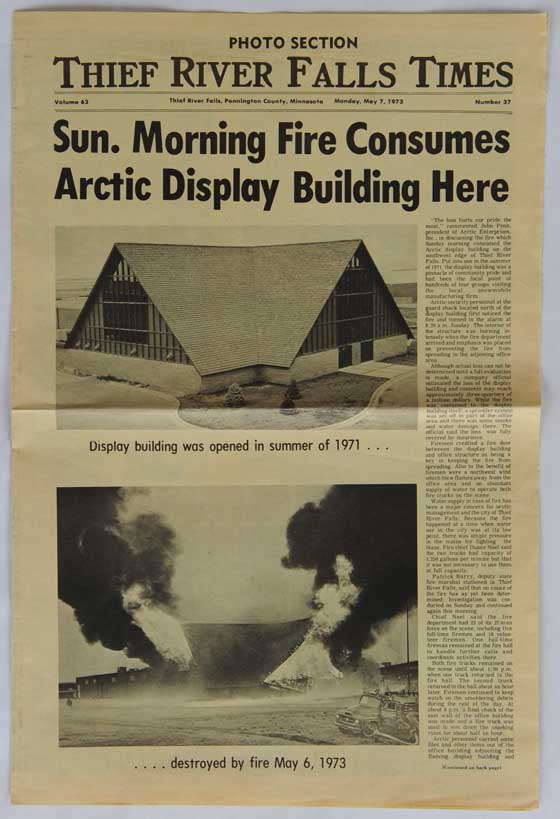 On Sunday, May 6, 1973, less than two years after its official opening, tragedy struck the Arctic Cat display building. This was a photo section that ran in the Times the next day. 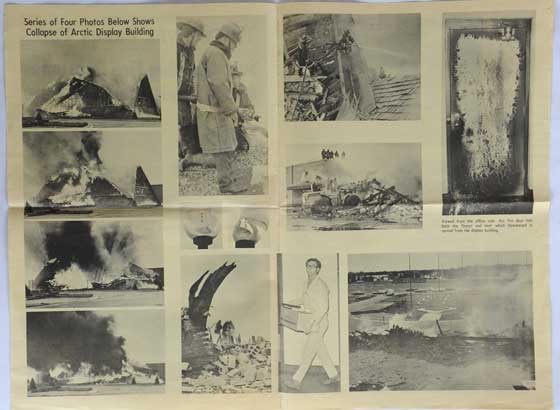 Even though the building was LONG before my time as an Arctic Cat snowmobiler, I can’t help but feeling gutted when I see these images. Thankfully, no person was injured in the fire, which was believed to be electrical in origin.

For sure part of the “loss” I feel is that I sincerely wish that Arctic Cat had a display building today, in 2012. 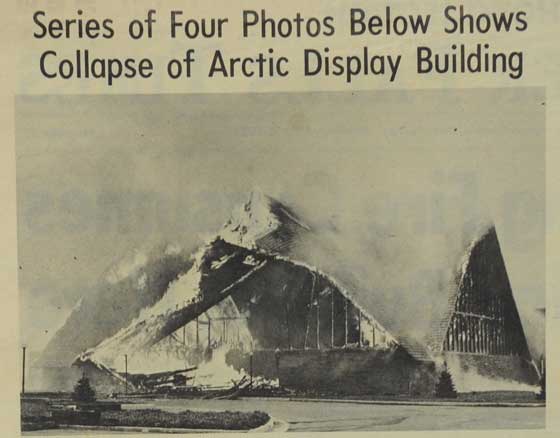 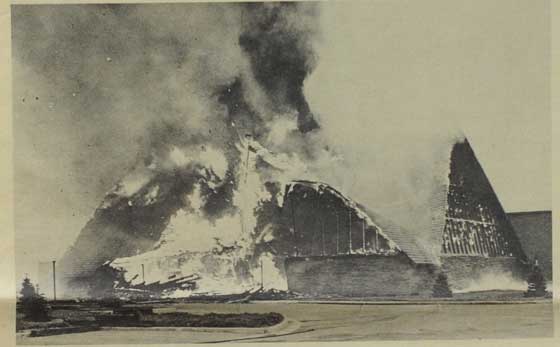 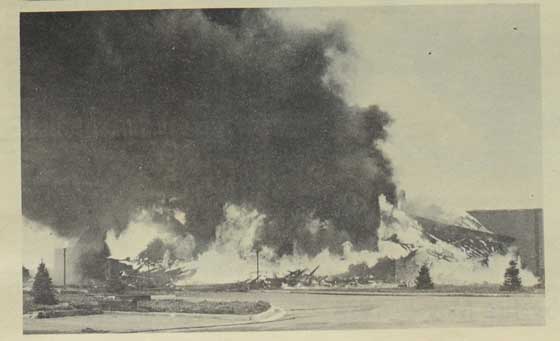 Indeed, more was lost in this fire than just some snowmobiles, boats, mowers and mini bikes.

But that doesn’t prevent me from hoping for the possibility that Arctic Cat again might one day have a display building in Thief River Falls. Probably not a $20 million dollar standalone structure next to the plant, but perhaps a sizable area of one of its existing buildings, or perhaps a renovated storefront in dowtown TRF.

I imagine this building displaying an amazing history of machines on loan from many of the amazing Arctic Cat collectors from across North America.

The walls decorated with posters, signs, pictures and memorabilia from the past five decades.

A store where visitors can purchase new Arctic Cat clothing and items.

I realize that in the current business climate, it’s EXTREMELY difficult for a company to justify any non-essential expense, or that doesn’t contribute to the bottom line.

However, I also believe that you can’t put a dollar value on pride and passion, two ingredients that have fueled the Arctic Cat family of riders and employees for more than five decades. I’m certain that the passion that currently burns for most of you reading this will be stoked a little brighter, a little hotter. And I’m confident that that flame would ignite the imaginations of many would-be Arctic Cat family members.

(And special thanks to Pam Cwikla, who was the hostess at the display building and whose archives are shown in this post.)

Below is the story as it appeared in the photo section of the Times: