I took my annual trip-back-in-time this past weekend: the Waconia (Minn.) Vintage Ride-In. As is always the case, it was a weekend worth its weight in Tillotsons. 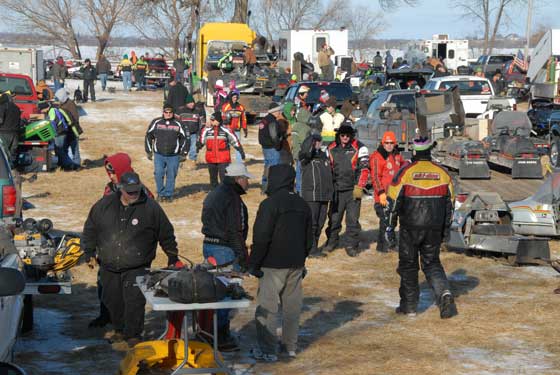 If you want it, chances are you’ll find it at the Saturday Swap Meet. Prices here seem a little higher than most other events, but it makes sense considering the ol’ supply-vs.-demand ratio.

While the swap is humming along, hundreds of sleds are buzzing along on Lake Waconia. It’s a beautiful sight, explosive sound and an olfactory delight.

A steady-stream of trucks with trailers pours into the place until after Noon. Aside from a few of the grass drag events and a handful of winter races, Waconia appears to my eyes one of the largest events in the entire sport of snowmobiling. I’m sure it’s the biggest ride-in event.

The sheer number of sleds, brands, colors and people really makes it feel like a trip back to the 1970s.

And there’s a little “lawlessness” that defines the weekend, as people are riding sleds amongst the crowd, a Loudest Pipes Contest causes mass ear-bleeding, and other throwback moments serve as a nice contrast to so many other events that can seem under the guidance of teams of liability lawyers.

Lots to see and smell. In fact, if there’s a knock on the whole event, it’s that it’s so dang BIG that it feels impossible to fully experience everything.

Speaking of experiencing something…after seeing a couple Puma Mods, I REALLY want to experience having one of these in my collection.

Lots of leopard print for those with restoration projects in mind.

To my eyes, there’s something pure, simple and beautiful about most of the snowmobiles from the 1970s. The same can be said of the gear. Interestingly, just as the 1970s sleds are dimensionally smaller than their modern counterparts, so too is the gear.

See what I’m saying about size difference? I wonder if there had been 10-plus-10-in. handlebar risers in 1972, might we have seen the invention of freestyle and energy drinks 30 years earlier? 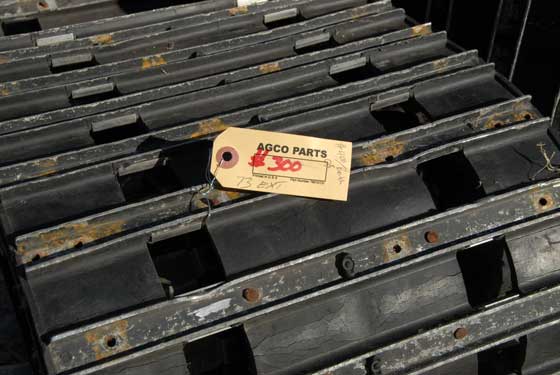 One element of the old sleds I’d prefer was never invented was the cleated track. I’ve personally had some hellacious crashes in my youth as a result of this near-death-trap (and spent every extra dollar buying replacement windshields because of it).

But as regular readers of this site know, I’m a sucker for old patches. This dude had lots to show.

Anyone looking for a ’77 Arctic Cat Z powered by a Speedwerx-massaged 800 twin? You could have purchased this one.

That better not be a pyramidal chassis underneath that hood, otherwise the owner of this rig will be hearing from some lawyers.

Speaking of lawyers, I wonder if Yamaha’s are aware that this guy is driving around on a prototype 1989 SRV?

I also wonder if this is considered rider-forward? 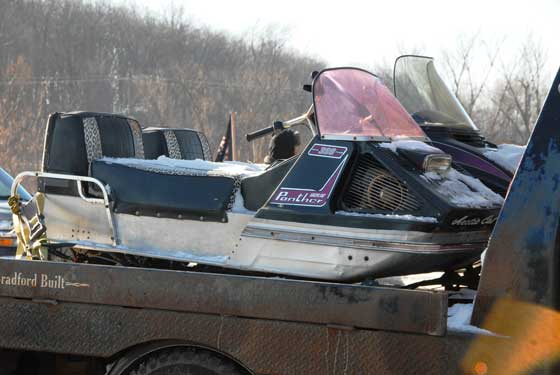 Lots of sleds with a crusty layer of snow on them, evidence of having been pulled out from behind the barn and thrown on the trailer for their trip to the swap. 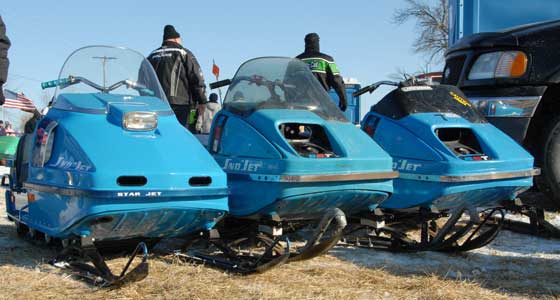 Gotta love the work-in-progress sales approach that some bring to the swap meet.

Really, can you ever have enough recoils?

Cat Girl was there, looking all leopard-like.

And so was Boss Hogg.

Tom Rowland from Thomas Sno Sports is a Boss Hogg in his own sort of way. What exactly I mean by that, I’m not sure.

The Scorpion Squadron was out in full-force.

The local HOG Chapter was also there and looking to do some high-mile saddlebag touring.

Due to the lame-o winter we’re having, the WOBLE crew was unable to host its 7th Annual ride to Waconia, but many past participants still came to Waconia. From left: Pat Bourgeois, Tim Erickson, Charles Plueddeman and Pete Schow.

Last year’s WOBLE Trophy winner Jason MacDonald poses with the traveling prize. Since there was no WOBLE this year, Jason will care for this rugged trophy for another year.

As a vintage event, Waconia sees more than its fair share of opened hoods amid demands for “more ether.” Lots of sleds that “run on spray.” 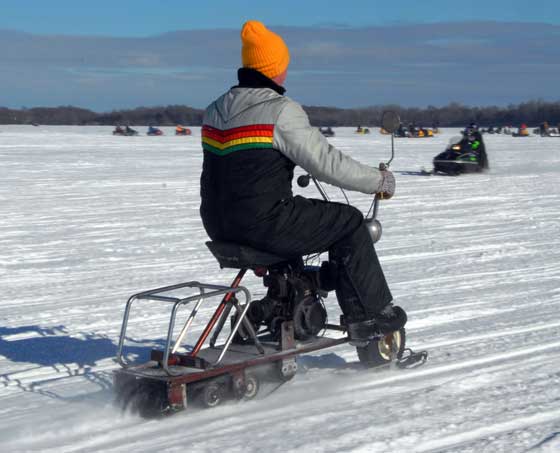 If you’re going to ride a contraption like this, you better wear a John Deere snow suit. 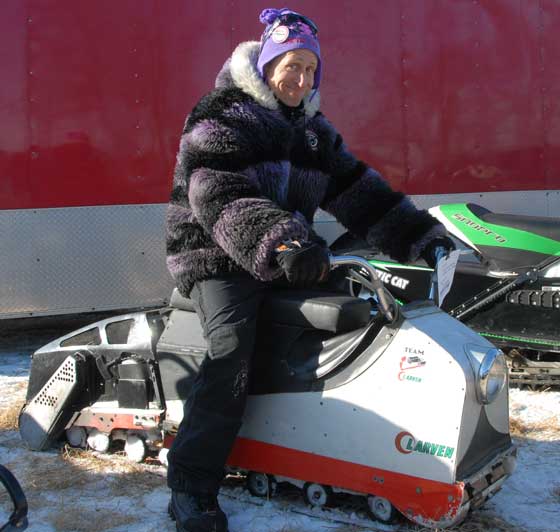 Similarily, if you’re going to ride a Larven (and represent ArcticInsider), you gotta wear a classic piece of Cat fur. (Thanks to the aforementioned Charles Plueddeman for this most wonderful piece of vintage clothing!)

Turns out I wasn’t the only one walking around Waconia in a furry-purple-haze. 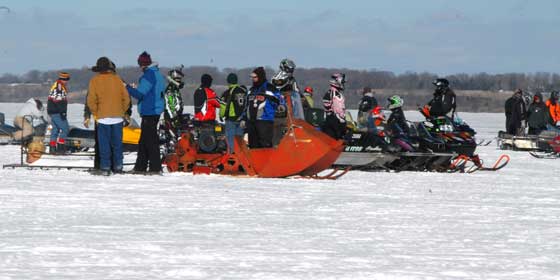 A few antique sleds are always part of the Waconia experience.

Ditto for ATVs and a handful of modern sleds.

I saw Paul’s amazing sled, but I didn’t see Paul.

Along with this Grass Cat.

But judging from the crowd a few minutes later, the Grass Cat was going to find a new home.

Arctic Restoration Specialties was there, selling high-quality repop parts. I think it’s awesome that such parts are available to those doing resto projects.

A principle organizer of the Waconia Ride-In is this guy, John Zeglin. John is also the defacto Elvis impersonator of the group, and here he’s belting out a tearful rendition of “Love Me Tender.”

Chaparral was the featured brand this year at Waconia, and inside the ballroom was an excellent diplay of stuff.

For those looking to jump on the Chappy bandwagon, there were plenty of buy-in opportunities.

This guy thought that Waconia was a vintage VW Ride-In.

And these guys thought that Waconia would be a great place to sell garbage bags full of contraband.

I hope you enjoyed my pix from Waconia. Thanks for reading.