10 Observations About the 2012 Arctic Cats 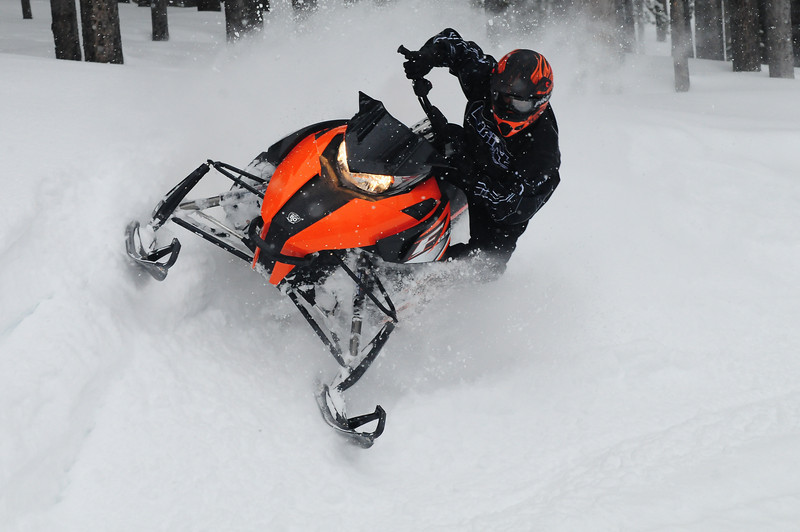 Arctic Cat has done a nice job of briefly explaining some of the technology on the new 2012 sleds HERE on their website. And I will soon post my own version of this info. But for my first post about these machines, I wanted to give you something other than just specs.

After witnessing the evolution of project-F4 during the past three years, then recently spending the better part of three days riding pre-production versions of the 2012 Arctic Cat snowmobile line, here are nine observations I’d like to share. 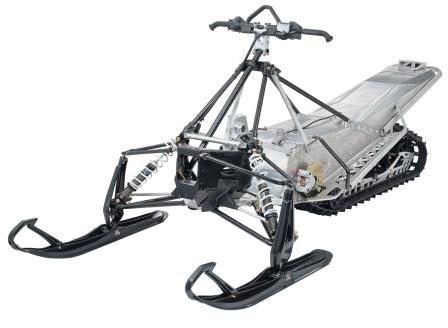 One…Rigidity: Ditch-bangers rejoice! The combination of a pyramidal chassis, a 2-piece tunnel and a drop in weight has produced one SERIOUSLY responsive chassis. In fact, that’s the first thing I notice every time I ride one of these sleds. Make an input into the chassis (whether it’s to lean it into snow, brake-pitch it into a corner or try to get stylish on a jump) and it reacts INSTANTLY. 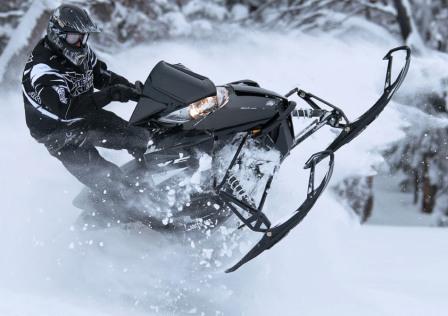 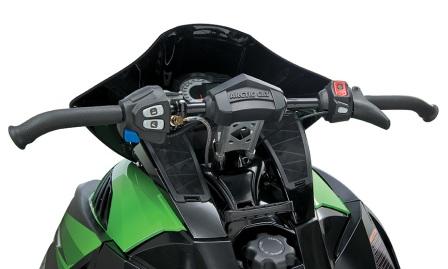 Three…Ergonomics: Ergo’s make the sled…good or bad. When the touch points are smart, rounded and natural, a sled feels “right.” Which is exactly what Arctic Cat did with the cockpit of the new F, XF and M sleds. 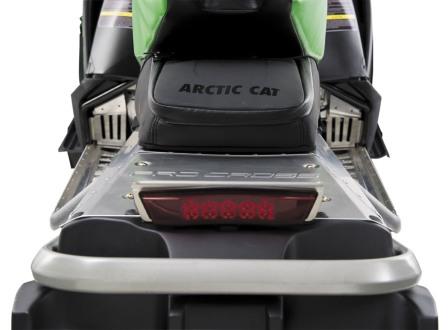 The seat is narrower and naturally curved/tapered for leaning into corners. The plastic where your knees push up against the cowling is rounded and smooth, so there’s no uncomfortable “contact.”

Handlebars are the same design/shape that we’ve had on the Twin Spar chassis, which I personally think is the best shape in the biz. The XF and M sleds get a new, stiff-plastic grab bar that I like better than the last mountain-style handlebar.

The running boards are wide (plenty of room for my size-12 snocross-style boots), and foot placement is comfortably-forward.

Four…Race Chassis development: Arctic Cat said they were using the 2008-current Sno Pro race sled as a development tool for their next consumer sled. The evidence for this can be seen in several areas, most notably the tall spindles; taller spacing between the upper and lower A-arms; steel spars.

There are definitely similarities in how the new ProCross chassis rides compared with the Sno Pro, particularly in the rider position, chassis rigidity and chassis response to rider input.

But the ProCross is a far more refined sled. The seat is more comfortable with more foam yet less “square” edging, so it’s easier to move around on. The contact points for the legs (around the seat, fuel tank on knee area) are rounded and more comfortable. I prefer the regular Slide-Action rear suspension in the ProCross chassis over the race version in the Sno Pro, primarily because it’s more predictable and comfortable in chop or hard-edged bumps. And of course, the fit/finish is worlds apart. 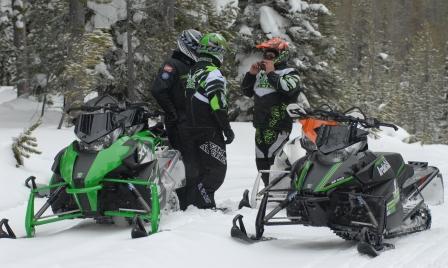 Five…Compared to my Sno Pro 500: I absolutely love my 2010 Sno Pro 500. Think it’s one of the all-time great Arctic Cat sleds. And while there are some significant similarities with the new 2012 Cats (like rider position on the chassis, some of the ergo’s, chassis rigidity and reaction to input), the Sno Pro is definitely a race sled…loud, buzzy, marginal headlight performance, stiff. The new sled has smoothed over all those rough spots, with a level of refinement that most of us will appreciate. 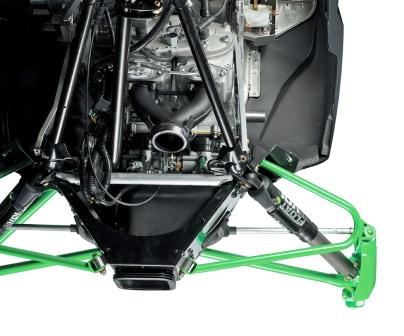 Six…Easy steering: Arctic Cat engineers prided themselves on the easy-steering nature of the Twin Spar chassis, and made a point of not sacrificing that easy-going trait on the new sleds using a single bell-crank. As a little guy (5’ 8” and 155 lbs.), I personally prefer a little less front-arm travel, and a little more positive steering than how they set the sleds up for the media to ride. The steering is SO light right now that I’m fine giving up a little there in order to have more ski pressure. One thing’s for certain, there will be NO need for a $750-$1,000 retail up-charge because they need to add power steering.

The XF (formerly Crossfire) models are literally transformed by the new steering system (and the handlebar placement/steering geometry). Now the handlebars turn in an arc that’s natural to the rider’s position, with an ease that will astound Crossfire owners. 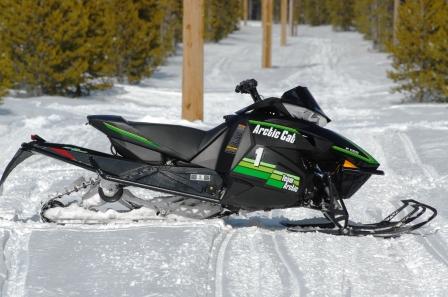 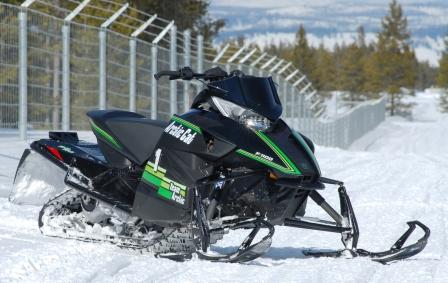 Seven…50th Anniversary model: Taste is in the eye of the beholder. Still…by marrying the new sled with classic late-‘70s Team Arctic graphics, Arctic Cat absolutely knocked one out of the styling park with their 50th Anniversary edition models. Simply stunning. The only bummer: they won’t be available with the 800 engine. 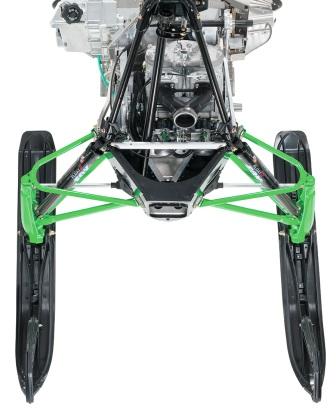 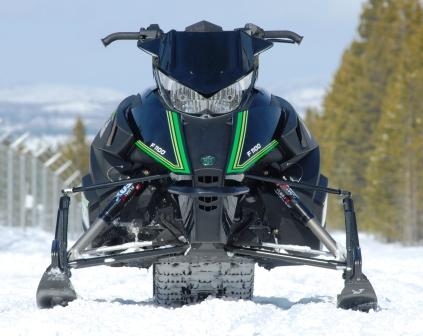 Eight…Packaging: It was a feat of CAD-CAM engineering, cooling strategies and creativity to create a chassis/bodywork package that’s as tight as the new Arctic Cats, and yet accommodates a turbocharged 4-stroke engine (and the 800 of course). Compared to the Twin Spar chassis, there is less wind protection. The new hood is significantly smaller by comparison. 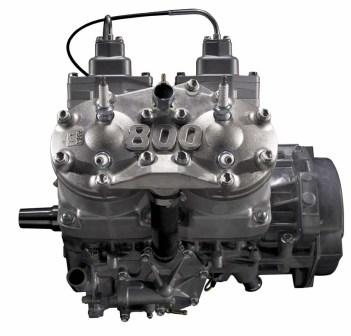 After a season riding a 2011 F800, I have fallen in love with this engine. So has my wife, who rides about 200 miles a year, as well as my son who’s in 3rd grade. It’s a motor that kicks butt when you want, yet can be ridden at a snail’s pace all day long, like we did over New Year’s when my mother-in-law rode with us for a few days. My point is that no 600 rider should be intimidated by the 800 H.O. 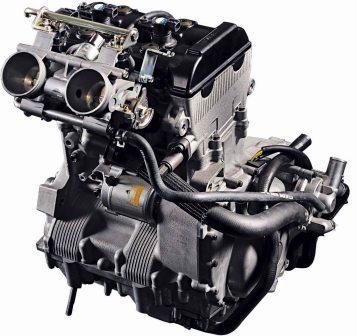 Conversely, the 1100 definitely “comes to life” when it’s in a package that’s 51 lbs. lighter than the Twin Spar. And it isn’t just more lively…its inherent weight is well hidden in the ProCross chassis, because the F1100 and XF1100 are flickable like no other 4-stroke I’ve ridden. I believe these sleds will satisfy the vast majority of 600-class riders. 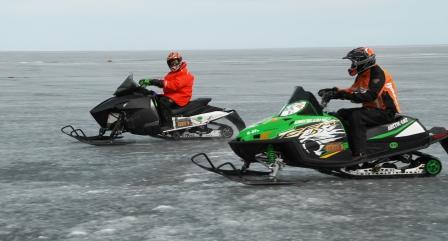 Ten…So Fast It’s Sick: That describes the any version of the 1100 Turbo. With a 64-lb. weight reduction from the Twin Spar Turbo, the new Arctic Drive System with Torque Control Link putting more power to the drive train, and a decidedly smaller frontal area (read: better aerodynamics), the new Turbos are truly stupid-fast. Seriously.

You will hear a chorus of magazine and web editors trying to explain how wicked-fast the Turbo is. Believe them.

The shot above was taken on Lake of the Woods, in the spring of 2010.