17 October in TRF: A Couple Days at Arctic Cat

The air was brisk and the activity bristling at Arctic Cat last week.

The two days I spent there were a strong reminder that winter is coming, and that the energy here is infectious. 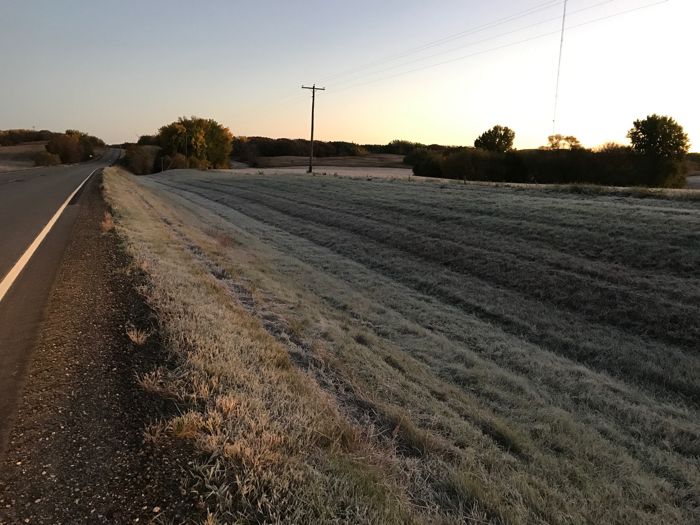 When I say the air was brisk, I’m talking about a wonderful white-grey sheen of frost covering the grass as I drove towards Thief River Falls. In a couple months, this ditch will be white with snow. 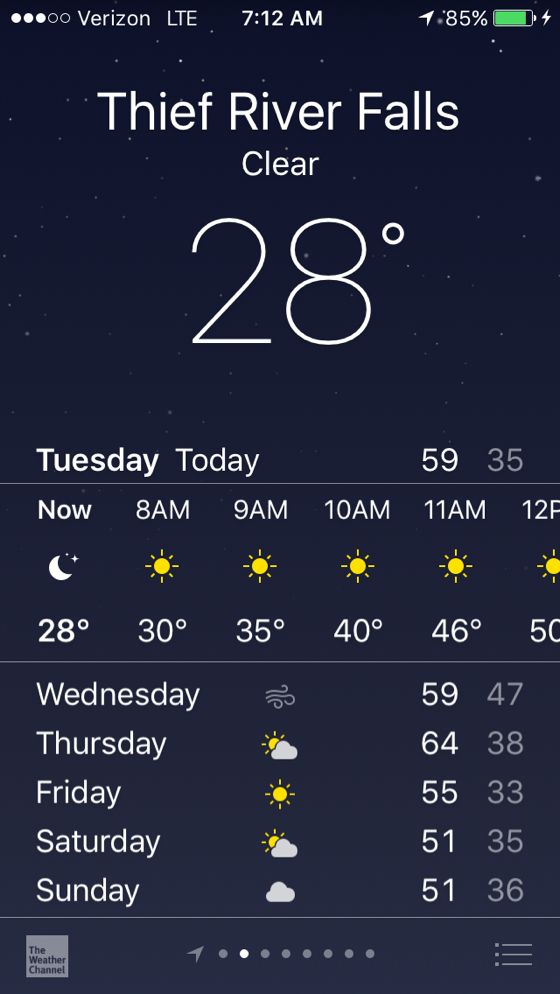 When I say brisk and you ask, “How Brisk?”, I respond with a screen capture from my phone. Yep, winter is coming. 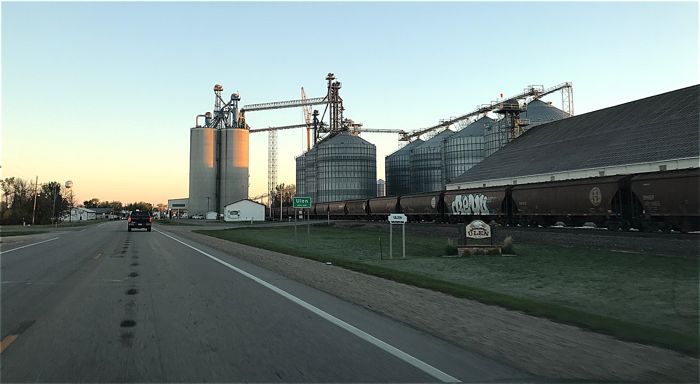 Fall harvest was in full swing everywhere in the region. Sugar beets were piling up, there were dust plumes scattering across the horizon, kicked-up from combines working the corn and soybeans. The elevators in Ulen, Minn., just south of TRF were a flurry of activity.

Pulling into the already-packed Arctic Cat parking lot at 8am brings one of my favorite sights in the world: the sign, and what it represents inside.

One of the reasons I was in TRF was to do a story on the all-new paint line, which became full operational just over a year ago. I got a sweet tour of the $14 Million system from John Hassert (pictured), the Paint Manufacturing Manager, and I’ll have the story posted in the next couple weeks. 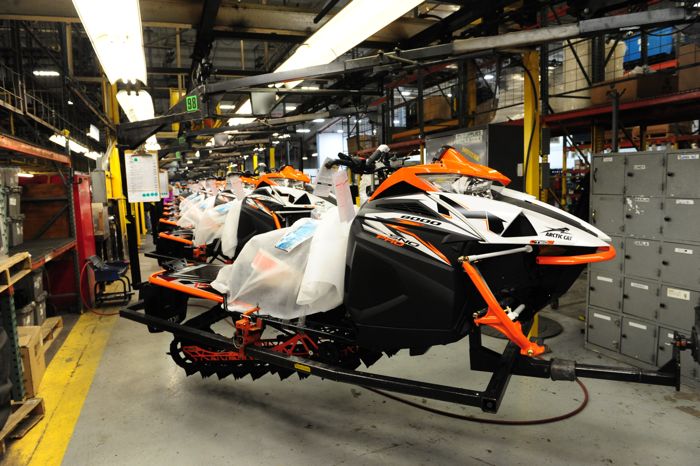 Beautiful 2018 M8000 Sno Pro models were rolling down the snowmobile assembly line, looking almost ready to rip the mountain snow that is already being ridden in parts of the Rocky Mountains.

Five months Craig Kennedy was named Vice President, Snow & International, and he’s been on a tear getting things done ever since, including a recent move back to Thief River Falls from the Twin Cities. Kennedy has always been sharp, focused and aiming forward, but he’s ratcheted that up 10x these days. Since I know he’s too busy to do an interview anytime soon, I’ll relay that the two primary topics we discussed were the company’s efforts to help dealers become as healthy as possible, and the company’s continued focus on new technology. 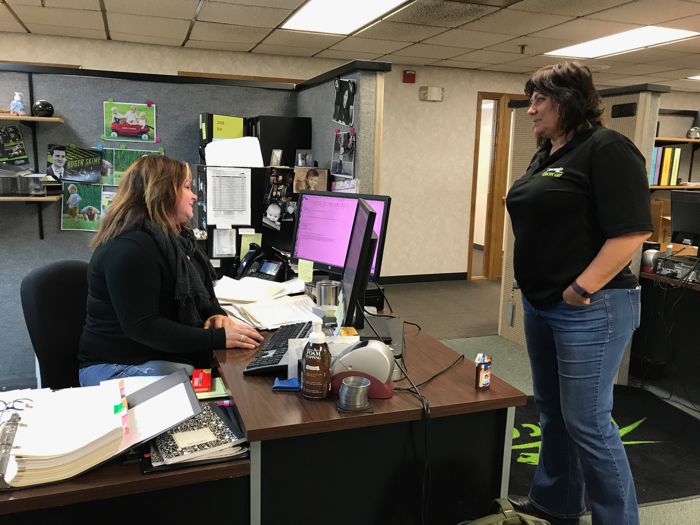 Leaving Kennedy, I met with Kathy Johnson (left) and Marilyn Helgeland (right), two people who’ve quietly gone about doing TONS stuff behind the scene that brings all kinds of cool stuff to the forefront.

One of the many roles that Kathy has, is to manage the Cat’s Pride Club, as well as helping administer dealer show events.

Marilyn has been integral to Arcticwear Parts, Garments and Accessories for as long as I can remember, managing various aspects of the department and its related projects. Hard to believe, but on this day she was already knee-deep into working on the 2019 Arcticwear Catalog!

Keith Johnson is another person who’s integral to Arcticwear, managing most of what occurs with snowmobile parts and accessories. A hardcore snowmobile and dirt biker (notice the sweet vintage Kent Howerton-on-a-Husky poster behind him!), Keith is an ace when it comes to identifying cool stuff that snowmobilers want for their sleds, then working to incorporate them into the Arctic Cat system.

He’s holding up the 2018 supplemental catalog, which is only days away from being finalized. Once it’s ready, I’ll post it here on ArcticInsider.

Famished from bolting around the plant, I couldn’t wait for lunch at one of my favorite places in town: Biff’s (formerly known as Dee’s).

Joined by Troy Halvorson (left), Wes Selby (middle) and Roger Skime, I wolfed down the lunch special of potato dumpling and bacon in 37 seconds. Sooooo Good!

It’s fascinating talking with these guys, each of whom is an engineer, highly competitive AND a racer. Much of our conversation this day was about snow bikes, the new 2018 ZR 6000R SX race sled (a pre-production version of which Wes had ridden on the company test track earlier that day) and the increasing number of “flatland” riders who buy mountain sleds. 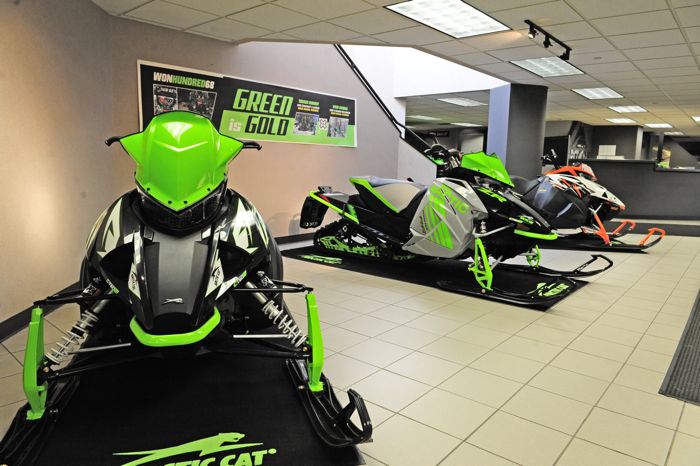 Back at the plant, it was good to see some new 2018 sleds gracing the lobby. A fully decked-out Prowler was sitting just around the corner. Seeing machines like these on a daily basis is a clear reminder to everyone here that they produce some of the sweetest machines and products on earth! Tons of pride, inspiration and satisfaction reflected in that. 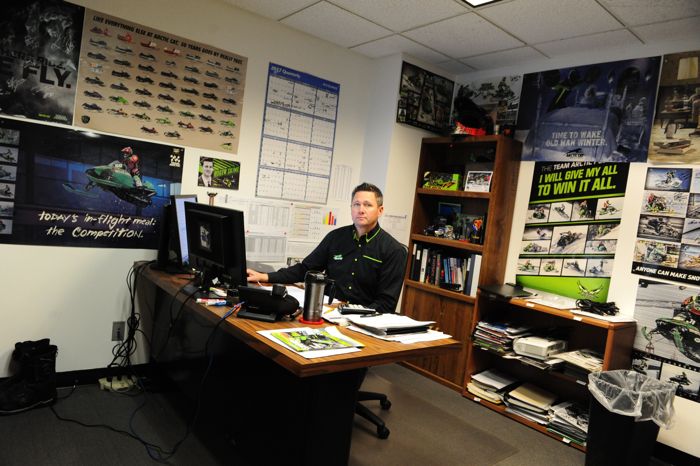 I spent some time with Troy Halvorson, Director of Snowmobile Engineering, learning about some future product that I’ll soon write some stories about. In his role, Troy oversees all of snowmobile engineering at Arctic Cat, which is pretty awesome. One thing that’s really cool about Troy, is that in addition to all the high-level stuff he has to know for his job, he’s also acutely knowledgable about ground-level details about Arctic Cat sleds, and even competitive brand machines.

Another cool thing: his office is decked out with some really sweet posters. 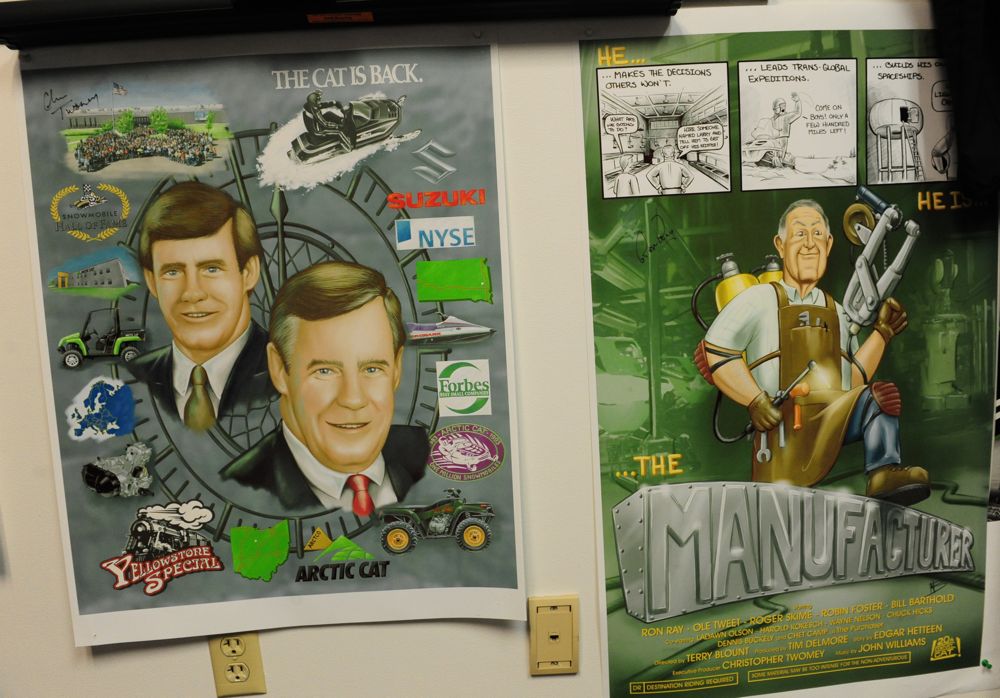 Two of the posters were VERY limited versions created by designer Nathan Blomker for the retirement of former President/CEO Chris Twomey (left) and VP of Manufacturing, Ron Ray (right). 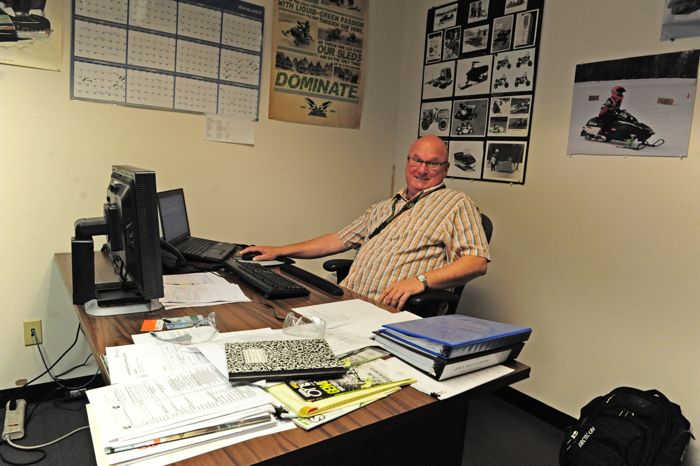 No trip to Cat would be complete without spending some time with Joey Hallstrom, who spends much of his time as a company liason with Yamaha in addition to several other special projects.

On this day, Joey was fired up to talk about the new Junior Ride-Along option for parents whose kids are going to race the USXC I-500 cross-country. That’s another topic I’ll soon write about. 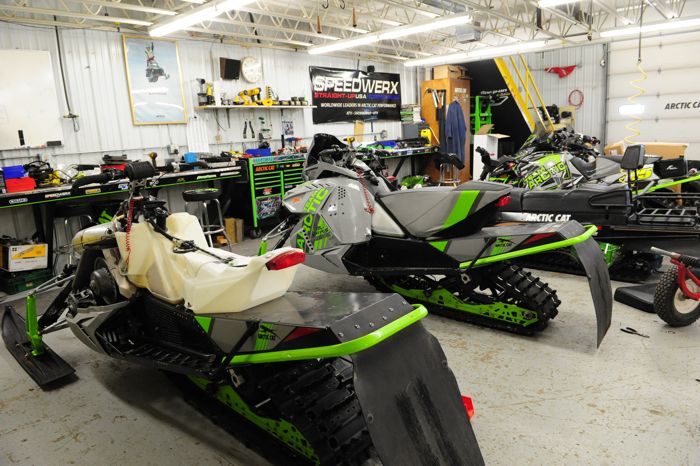 No trip to Arctic Cat is complete for me unless I take a peek inside the Team Arctic Race Shop. On this day, the crew of Mike Kloety, Jeff Wittwer and Kelland Bjerke had been working on the 50-percent throttle block stuff for the new ZR race sleds, that many circuits will require this season in most of their youth classes.

Before leaving town I spent some time at the Hibbert race shop, where both Kirk and Tucker were busy working on sled stuff for the coming season. With the season-opener at Duluth a little more than one month away, they were both sporting that aura of intensity that defines a dedicated racing effort on the eve of a new season.

There are parts to build, trailers to organize, test trips to plan and a thousand other details to iron out. I’ve watched these two attack this process for as long as I can remember. I’m always impressed by their ingenuity and dedication. They’ve been two of the sport’s most successful racers in part because they were blessed with talent, but I believe that their relentless hard work played an even bigger role.