Arctic Cat recently pulled the wraps off of most of its 2014 line of ATVs and side-by-sides (I say “most” because in recent years the company has sometimes released its machines in waves, rather than all at once).

The reader’s digest version is that, for now at least, they’ve released a batch of new 500s in various incarnations, each with an attractive low price. The 500 is actually a 450 engine, but who’s counting?!?

A trio of Prowler HDX models (the standard,; the XT package that features aluminum wheels, painted bodywork and both front/side storage compartments; and the Limited EPS models that has the extra bling of the XT plus power steering and a tilt wheel). 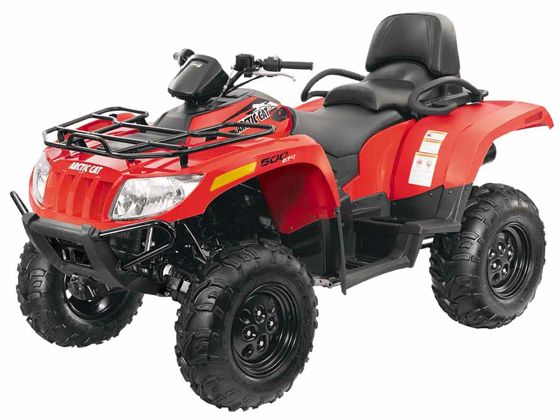 A new TRV 500 aimed at the 2-up family who wants a low entry price point, the performance of a liquid-cooled engine (there’s a TRV 400 that’s powered by the air/oil-cooled 366 engine) and the most recent bodywork.

The Wildcat 4X and Wildcat 4 Limited are also recently introduced, each sporting the powered-up 93-hp engine and a revised brake pedal (with new lever ratio).

Of course there are new paint and graphics schemes across all model lines for 2014, with the automotive-style metal flake paint options that, when seen in-person, truly look 13.4-times better than regular molded-in color.

Arctic Cat assembled some ATVs, Prowlers and Wildcats in Hastings, Minn., recently for some journalists to get a flavor of their performance and capabilities in an area that included a small sand track, a field for testing the SpeedPoint (foodplot) attachments and a short trail course. This format offered the opportunity to garner some general impressions of the various machines, rather than long-term tests.

I continue to an evolution of improvement in overall quality of Arctic Cats machines, from shift lever detentions to throttle modulation to tire performance. Improvements like the overall reduced sound of the three-passenger Prowler HDX models (all HDX models are quieter for the occupants from the get-go) are well appreciated.

I also continue to be surprised by how much I like electronic power steering. Case in point: the new Prowler 500 HDX. I spent 20 minutes riding the base model, which doesn’t have EPS. And while riding it, I kept thinking that its steering was so easy that I sort of dismissed the “need” for EPS.

And then I got on a Prowler with EPS and I was instantly (and surprisingly) pleased by noticeable ease and comfort.

EPS transforms Arctic Cat’s ATV steering, and I would not buy a new machine without it. I would also opt for it on the Prowlers, especially since other members of my family would appreciate the difference even more than myself. Yes, the $700 upcharge would give me pause, but not for too long.

I’m happy to report that the Wildcat 4 models drive much smaller than they look. Seriously, when I look at these (in picture format), they look like they’re stretch-limousines. In-person they look a little bit long, but not crazy. Yet when I drive it, the 4-seater feels dang tidy. And from a stability standpoint, they’re astounding! I even spent some time in the back seat, which is significantly more enjoyable than I’d imagined. To celebrate, I had Mike launch the Wildcat 4 over a car. Nice job with that, Mike!

On the topic of Wildcat, I’ll make my last point for today: Arctic Cat has made it pretty clear that this is a category that they’re focusing on with the greatest intensity. They’ve already announced the 50-in. wide Wildcat that’s soon-to-come. And with the competition building increasingly more powerful machines, I’m certain the Cat engineering crew isn’t just twiddling their thumbs. I believe will see more new product in this sport SBS category, sooner rather than later.