Arriving at the Snowmobile Hall of Fame in St. Germain, Wis., the flags were flying high along with the snow banks. Like most of the country, this area has enjoyed fantastic winter conditions for sledders. No doubt, the hall and the entire northwoods of Wisconsin would be swarming with snowmobilers all weekend.

I had the great fortune of driving with Team Arctic’s Jim Dimmerman to St. Germain. The moment we arrived, he jumped out of the truck and onto this sweet Skiroule, where he demonstrated his great Sno Pro style. Jim never raced a Skiroule back in the day, but I like to think he’s considering now. 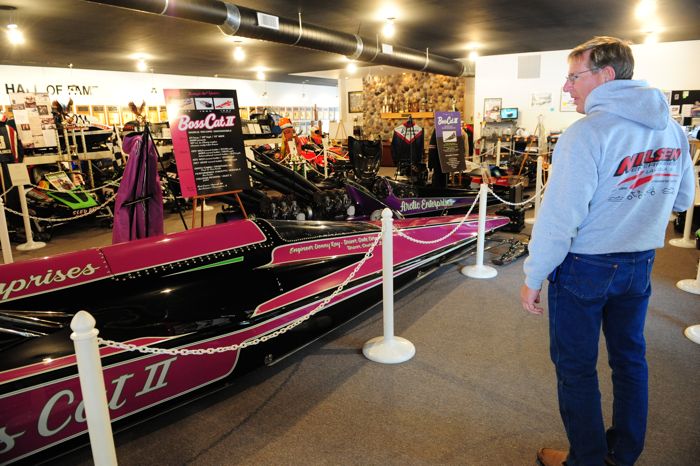 Walk through the doors of the SHOF right now and you’re greeted by the amazing Arctic Cat Boss Cat II and III speed run sleds. I’ve seen these machines several times during the past few years (thanks to the Warning family), yet each visit stops me in my tracks and gives me pause.

I wonder, what might a modern Arctic Cat speed run sled look like, had the company continued to contest such records? Perhaps it would look like a 2014 F1100 Turbo?!

Inside the C.J. Ramstad Memorial Library sits one of Blair Morgan’s Arctic Cat ZR race sleds. Morgan was inducted into the SHOF last year. Four more people would be inducted during this past weekend.

There are many dozen significant race sleds on display at the SHOF (and hundreds more in storage, all rotated on a regular basis), including this battle of titans. Blair Morgan’s Ski-Doo REV on the left, Tucker Hibbert’s ZR 440 Sno Pro on the right.

I never get tired of looking at the historic sleds on display at the SHOF, including this Ski-Doo RV Cross-Country that Gerard “King” Karpik raced to multiple ICCSF victories and championships. 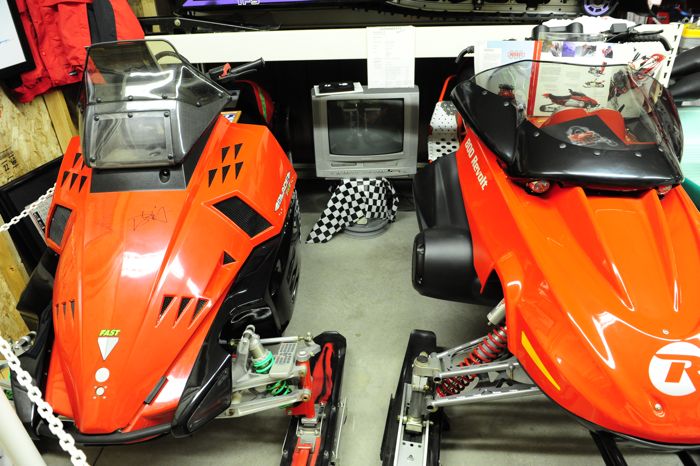 In addition to significant race sleds, the SHOF also displays significant consumer sleds.  The FAST Blade (left) and Redline Revolt certainly captured the imaginations of snowmobilers more than a decade ago.

The Blade was/is pretty innovative, and the company continues to hand-build several new models each year. The Redline is far more of a novelty machine, with very few in the public domain (and even fewer being ridden).

There is a wide array of snowmobile memorabilia on display at the SHOF, including this prized Arctic Cat clock featuring a race image of Dimmerman himself. Jim is pointing out that he looked better on the Sno Pro Cat than he did on the Skiroule. 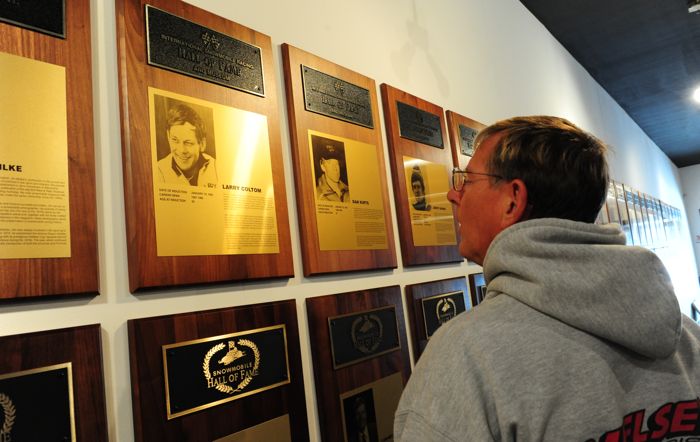 The Snowmobile Hall of Fame’s mission statement: “Dedicated to preserving and showcasing the rich and exciting history of snowmobiling at both the recreational and competitive levels through the operation of a museum, hall of fame and library for the sport.  Annual inductions honor the men and women that have played significant roles at the racing venues, design and manufacturing arenas, local clubs, state associations and national organizations.”

Each year the SHOF inducts people based on the above criteria. Two plaques describing each inductee are produced, one that’s given to the inductee and the other for display at the SHOF.

Here 2010 inductee Jim Dimmerman reads the bio of his friend and mentor, Larry Coltom (a 1995 inductee).

Every person inducted into the SHOF is special. This year, there was an extra-special beauty to the weekend because of the induction of Loren Anderson (right), one of the three SHOF founders.

Anderson has dedicated the last three-plus decades of his life to launching, growing and sustaining the SHOF. He stepped down from the Board of Directors last August, but his legacy will forever remain by virtue of the SHOF’s very existence.

On Friday of SHOF weekend, Anderson hosted a party commemorating his various racing endeavors over the past four decades. Dozens of friends came to pay tribute, tease and shake hands with him.

Here Anderson explains the nuances of his NASCAR collection to Perry Schlueter, a principal architect of snowmobile grass drag racing and organization for four decades. 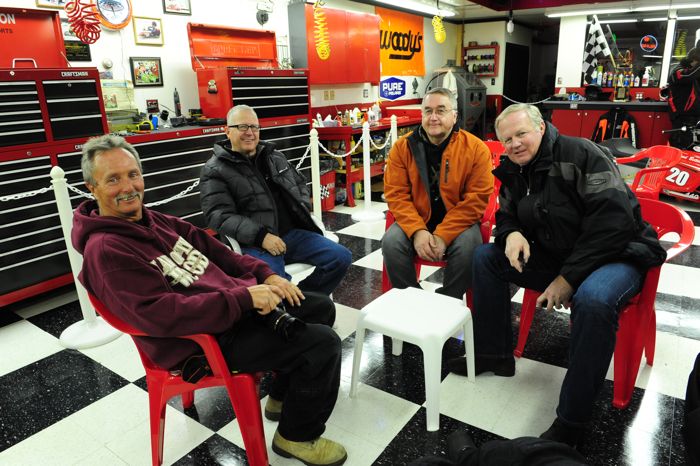 Ever since the induction of former John Deere snowmobile division president Robert Carlson in 2007, racers and fans of the brand have gathered for SHOF weekend with a passion and enthusiasm that’s as impressive as it is contagious.

Here former Enduro Team Deere cross-country racers (L-to-R) Doug Oster, Bobby Enns, Tom Otte and Jon Carlson catch up with each other while plotting their strategy for the next day’s Ride with the Champs Vintage Challenge. All four gentlemen are as passionate and dedicated to the sport of snowmobiling now as they were during the 1970s when they were the sport’s heroes. 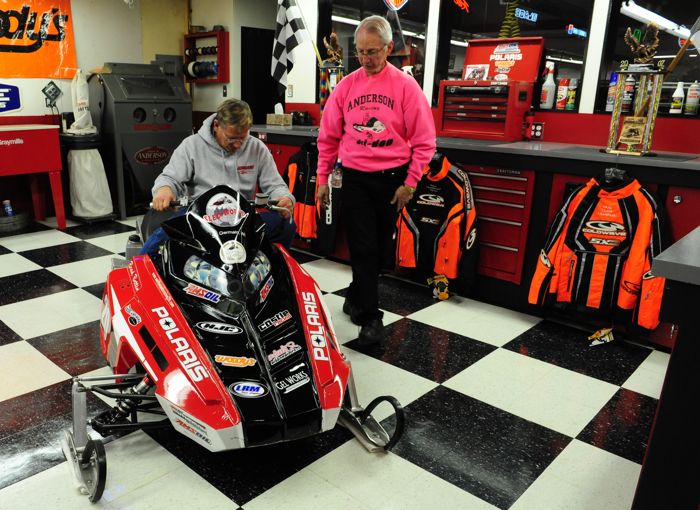 While the Enduro Team Deere gents were discussing race… er, ride strategy for the next day, Loren Anderson was giving Jim Dimmerman some pointers on how to pilot the Polaris Champ sled of Brad Bettin’s.

Only at the SHOF will you see the kind of brand swapping displayed by Dimmerman! No worries though, Jim came back into the Arctic Cat family by the end of the day.

For the past half-dozen years, Don Amber has organized a Friday dinner for John Deere fans, where all these knuckleheads gather to share stories, laugh and secretly strategize for the successful relaunch of the “other” green snowmobile brand. 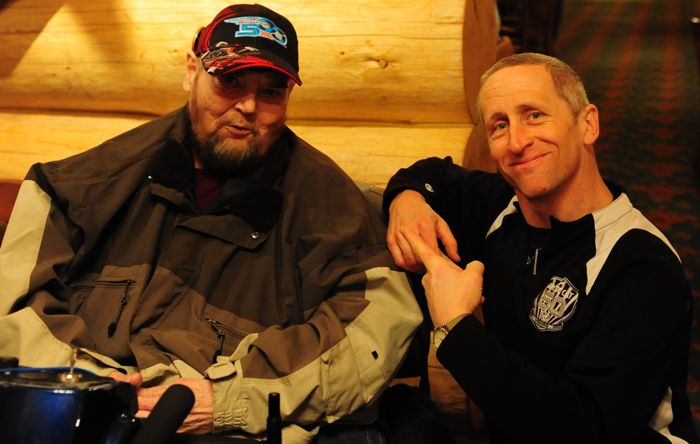 They let me join in the festivities simply to ridicule my love of Arctic Cat. This year I sat with Arctic Cat “people” like Brian Nelson, CPC owner Jim Graft and collectors Jack Nelson and Charles Plueddeman.

I also finally met former Team Arctic mechanic Steve Tabor (left), which was one of my many highlights of the weekend. Steve told me some great stories about his years as a mechanic for Team Arctic’s and John Deere’s cross-country programs, as well as his friendship with the late C.J. Ramstad.

For anyone who is a fan of snowmobile racing, SHOF weekend offers the very best opportunity to talk with people who shaped, lived and experienced the sport over the past five decades. To a man, each is joyful and gracious about sharing insight and stories from their time in the arena. 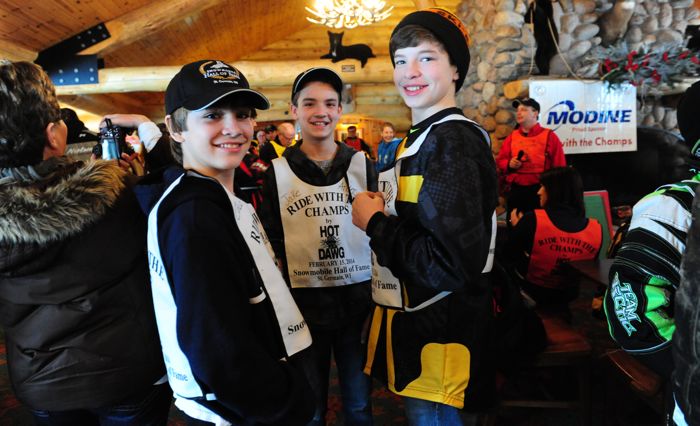 Saturday morning marks the group breakfast prior to the Ride with the Champs (RWTC) trail rides. It’s great to see a new generation of snowmobile race fans. 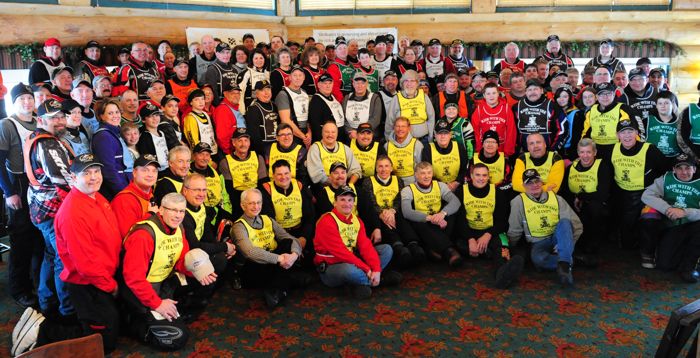 More than 100 people signed up for one of the five RWTC rides, which range from a liesurely 20 mile option to a hardcore 170-mile romp, with both vintage and modern sleds.

Everyone gets a bib that corresponds with the group they’re riding with, while the sport’s more famous participants wear yellow bibs so that they are easily identifiable. Again, it’s all part of being accessible to anyone interested in participating in this fantastic weekend. 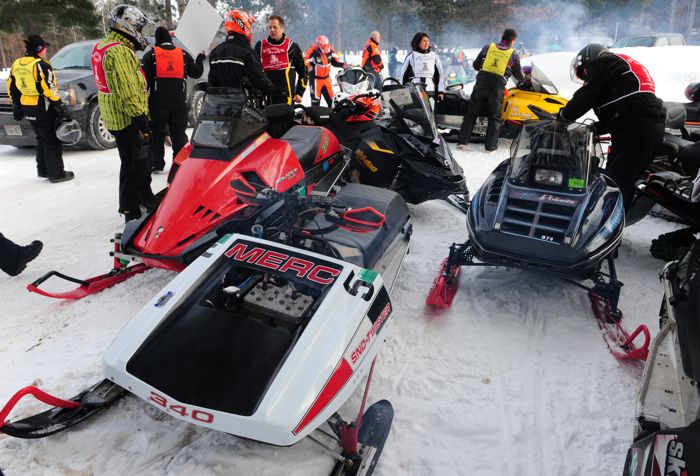 You see all kinds of cool machines at RWTC, including IFS Merc’s, FAST Blades and Polaris Indy Centurions. 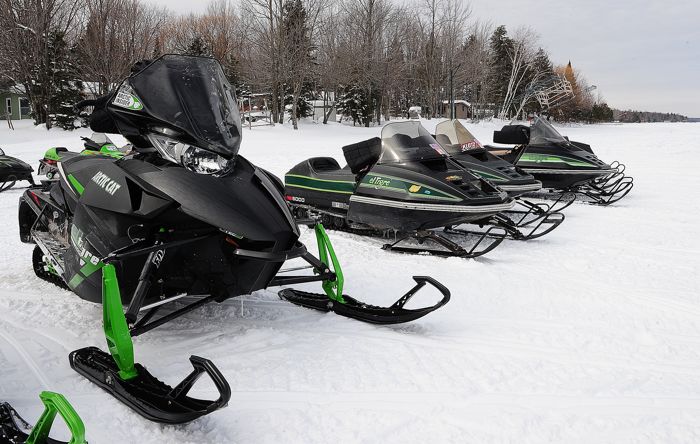 You also see A LOT of Arctic Cat El Tigres, both new and old. 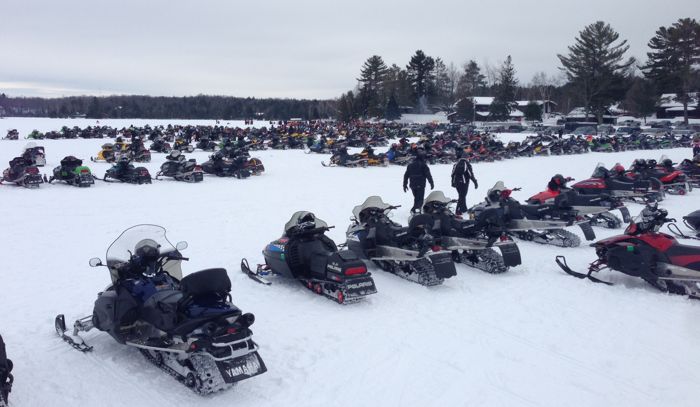 How vibrant is snowmobiling in the northwoods during an awesome winter? Seeing a couple hundred sleds parked near the radar run on Saturday gave me some insight into the answer.

The St. Germain, Sayner, Eagle River, Minocqua areas are in full snowmobile glory this season, which was wonderful to see and experience.

It was also wonderful to experience the 170-mile RWTC group that included the legendary Hayes family.

In addition to legends like Stan, Doug and Gene Hayes, the next generation including Arctic Cat engineer Ryan (above) and his brother Ben (a Polaris/Walker Evans engineer) were on the RWTC and providing solid entertainment for anyone who rode near them.

Ryan got a little off line during the jaunt back to St. Germain and it just so happened that I was able to document the occasion. Fortunately, there is no photographic evidence of me getting stuck (in the parking lot!) at the end of the ride. 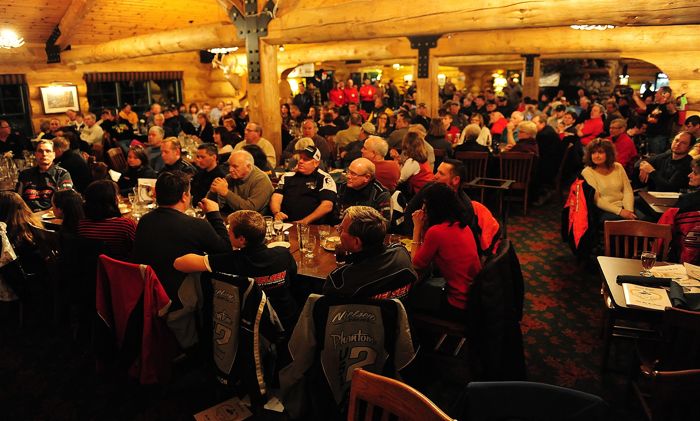 Saturday evening a crowd of about 300 gathered for the 2014 induction ceremony. It starts with a happy hour, followed by an autograph session and a nice meal. 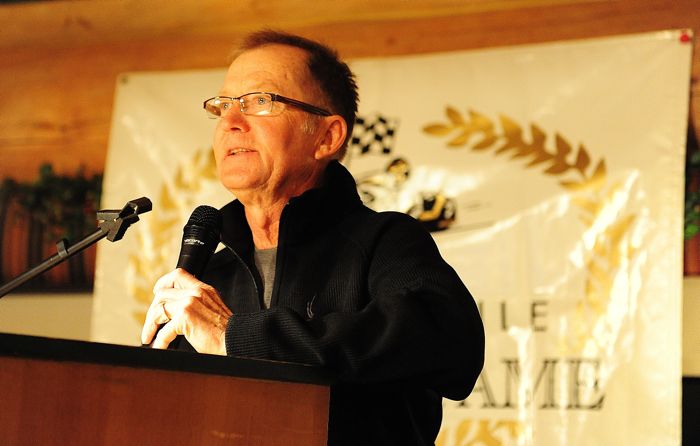 Don Omdahl was the first to be inducted. It was a true pleasure listening to this humble man share the story of his years as a Polaris Factory Sno Pro racer. Omdahl enjoyed many successes on the track, as well as a few near misses.

Meeting him in-person as well as listening to his story during the induction reinforced the fact that the vast majority of famous racers are truly “everyday” people who invested their hearts, souls and time in the pursuit of victory. Each sacrificed something to achieve success, and each experienced far more tough losses than great victories.

With people like Omdahl, I don’t see bravado or boastfulness. Rather, I see humble gratitude for the rare experiences and exceptional people they enjoyed during their careers. 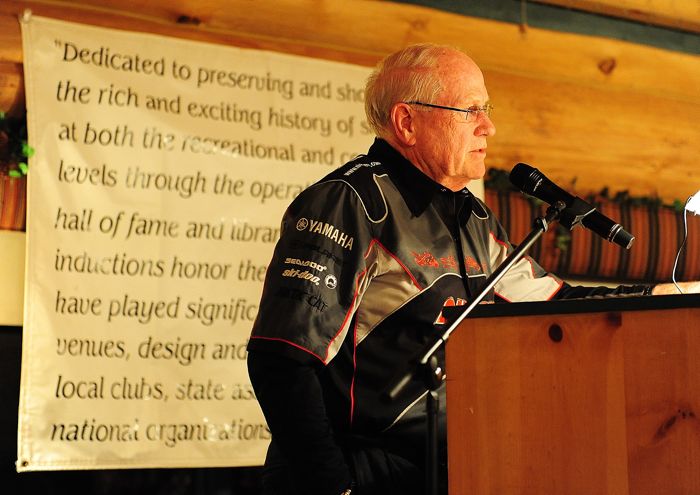 Such gratitude was also reflected by another 2014 inductee: Ted Nielsen.

From his expansive powersports dealership to the creation of Lakewood Sportswear in the 1980s, Nielsen has pioneered many innovative ideas during his career. It was great to see him recognized for his efforts.

Likewise, it was a real pleasure to hear Tom Rager Sr. express his appreciation for the many racers, teams and people he’s worked with during thirty years as a race team manager, first for Ski-Doo and later for Polaris.

Part of the beauty of SHOF weekend is that its spirit tears away the competitive walls that often separate people of “other” brands and instead allowing everyone to simply be snowmobilers who aren’t wearing or defending a particular color. 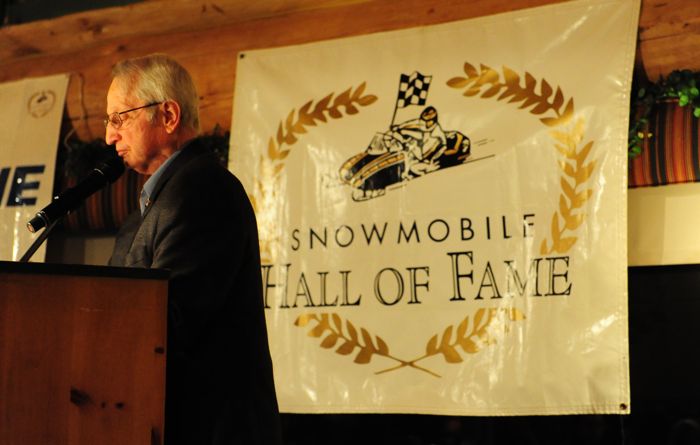 Loren Anderson was the final inductee of the evening and, in many ways, his “moment” was the emotional culmination of the weekend.

Each person who has touched the SHOF has made an important contribution.

Loren Anderson, however, is the guy who has made the greatest contribution during three decades of single-minded dedication to every single aspect of the SHOF.

Thank you, Loren, for a lifetime of passion. 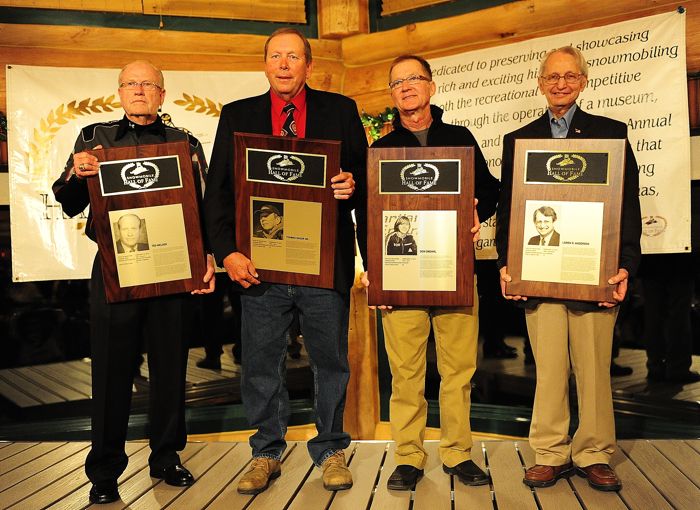 Congratulations to Ted Nielsen, Tom Rager Sr., Don Omdahl and Loren Anderson for their inductions into the Snowmobile Hall of Fame!