A Peek Inside John Anderson’s Shop

While I was at Arctic Cat last week, I stopped by my friend John Anderson’s shop in Thief River Falls.

There are many reasons to stop at John’s shop. For starters, John is a great guy. As a Sr. Technician in Arctic Cat ATV Engineering, I often see John at work building fancy new buggies.

Then there’s the fact that he’s TOTALLY plugged into cool snowmobile projects (like THIS AWESOME ZR SLEEPER), especially the vintage and mid-school stuff, so there’s always something cool to see.

But maybe better than all that stuff is that John’s shop has so many interesting things to look at.

I had originally planned to use a photo from this visit on last week’s Cat Trip Report, but as I looked at the images I realized they needed a post of their own.

So, here are some pix of John’s shop and its current contents:

That’s John on the right, kicking back and talking with Kale Wainer (Arctic Cat Marketing). Actually, I think John is talking and Kale is oogling over the two vintage Arctic Cats sitting before him. 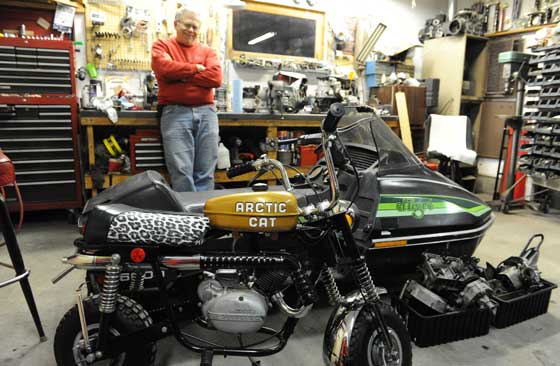 This was Kale’s view of the situation, so you can see why he was simultaneously ignoring John and hatching a plan to tell his wife the virtues of owning a 40-year old Arctic Cat mini bike.

Its engine (minus much of the sheered-in-two crank) is in the two boxes in front. This would be a deal-stopper for many would-be vintage riders and builders, but not Anderson. On the contrary, Anderson almost relishes the freedom of what possibilities exist for a machine whose engine has defaulted. 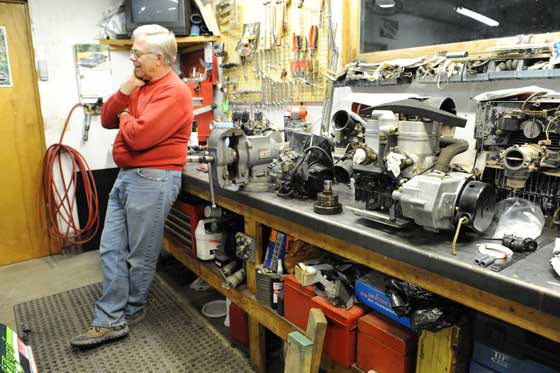