A Sort-Of Arctic Cat Xmas Party at the Zedshed

A couple months ago, a guy who visits this site named Brian invited me to see the Zedshed Collection of classic Arctic Cat snowmobiles and meet its owner, Rich Pederson. The only thing I knew about the Zedshed was what I saw on this post HERE. We set a date in December and I patiently waited.

As the date neared, Brian emailed with the message that a few other people would be at the Zedshed that night. Awesome, I thought, the more, the merrier!

Perhaps I should have had an inkling that this night would be more than just a tour of a collection when, a couple nights before the get-together, Jim Dimmerman called and suggested that I join him and his son Jimmy for the drive there.

“How did you know I was going to the Zedshed,” I asked.

“A friend of the owner told me there was a little party and that you were coming,” replied Dimmerman.

Three days later the Dimmerman Duo and I met up for the drive to the Zedshed, during which the elder Jim added some background info on the Zedshed:

It was just outside of New Richmond, Wis. The shed itself was an old dairy barn. The owner’s name is Rich Pederson who, Dimmerman explained, was nice guy who had a lot of really great Arctic Cat race sleds. Dimmerman said that Rich might even own one of Jim’s actual race sleds from his time on Factory Team Arctic Sno Pro squad. 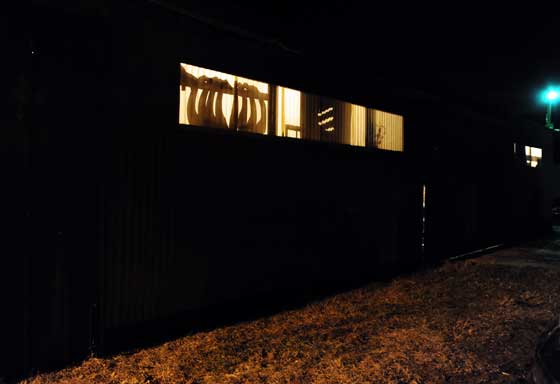 It was dark when we arrived at the Zedshed, but the exhaust pipe-shadows cast onto the window of one of the farm’s buildings hinted at the coolness in store for the evening.

We walked inside to find a nice gathering of a couple dozen people, most of them new faces to me. After handshakes, greetings and the cracking-open of some beverages, we wandered into the main room of the Zedshed and…Behold! 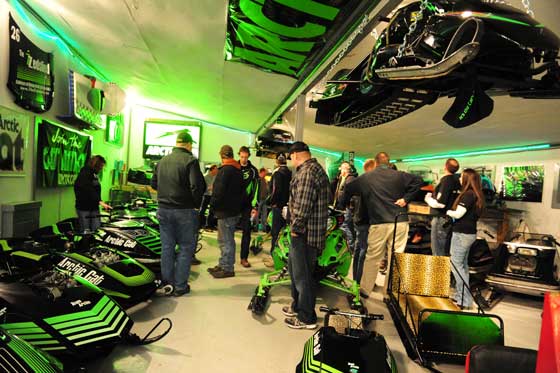 A feast for any vintage Cat lover’s eyes!

There were sleds along the walls, on racks and even hanging from the ceiling. Posters and signs hung on the walls. And, though it seemed out of place for what appeared to be a museum, I thought that I detected the smell of 2-stroke combustion.

And the whole scene was blanketed a warm green glow illuminating from the various neon.

Not long after we’d arrived the various clusters of conversation coalesced into one as we all listened to Rich Pederson (middle, hand on the seat) calmly answer questions about himself and his collection.

He grew up riding Arctic Cats in the 1970s and, like so many who experienced that era, Rich was enamored with Z and Sno Pro models built for oval racing. Their sensational styling and success on the racetrack mixed with his passion for the brand to produce a most-powerful desire.

Rich and his friends were soon drag racing his growing collection of vintage Arctic Cats, except he wasn’t collecting and they weren’t yet “vintage.”

“We weren’t collecting these sleds, we were racing them,” he explained. “Plus, a mid-’70s Z wasn’t considered vintage in the early 1980s. They were still pretty new.”

“And affordable,” he added.

“I needed a break from it all.”

The break didn’t last long. In 1997 he started again, but this time he was collecting more so than racing.

Along with a host of friends like Jim Soderquist, Jeff Holldorf, Toby Houston and others, Rich travelled far and wide; sometimes buying individual sleds and other times buying entire inventories of Arctic Cat dealers who had closed their doors.

And that’s what they’ve been doing for the past 15 years. 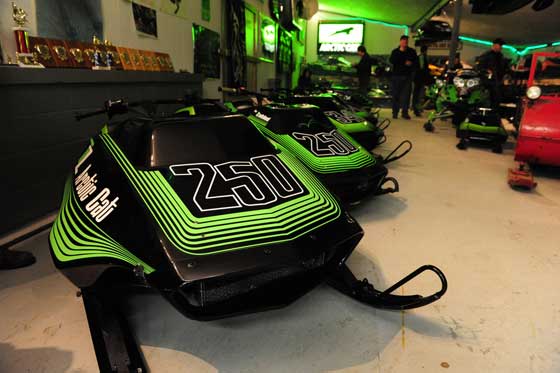 Not surprisingly, Rich and crew reestablished his fleet of 1977 Arctic Cat Z racers! 250s, 340s, 440s in the kind of “perfect” condition where they appear to have been run recently. 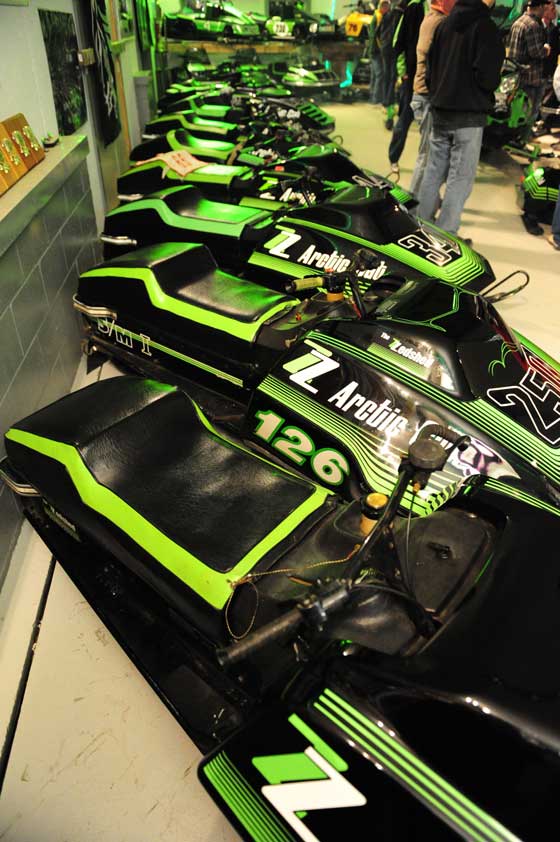 In fact, it was the model name Z that would ultimately spawn the Zedshed name.

As the story goes, many years ago while working in his shed on some Zs with friends, Rich received a phone call inquiring about buying some parts. The stranger on the other end of the phone kept referring to “zeds.”

Confused, Rich replied that he didn’t have any zeds or parts for zeds. He didn’t even know what a zed was?

Returning to his shed, Rich relayed the story to his friends, wondering aloud what heck a “zed” was while speculating about the intelligence of the caller.

“Everyone in the room immediately burst into laughter,” recalled Rich, “That was when I learned that Canadians pronounce the letter Z as ‘zed.'”

“So we started calling this whole operation the Zedshed.” 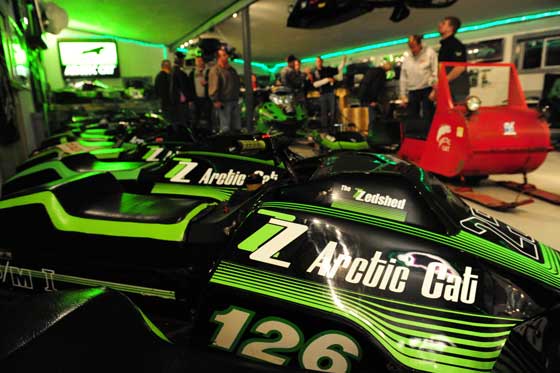 That and other great stories flowed through the Zedshed, made all the better by the fact that we were among some of the most iconic machines in Arctic Cat’s storied history. 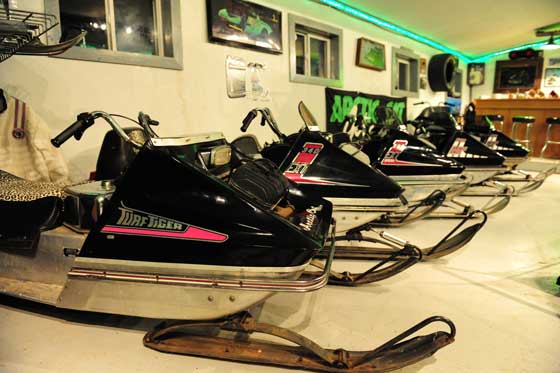 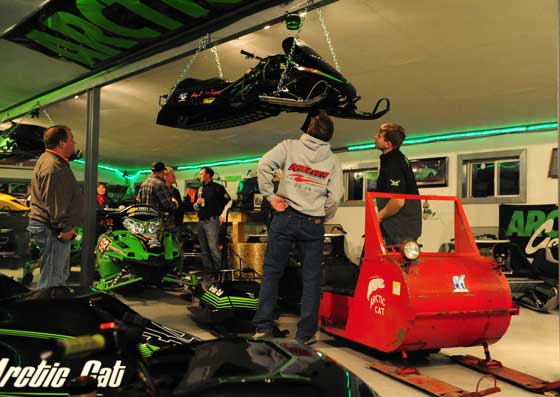 Like most large-scale collectors, Rich has accumulated more than just machines. His inventory of parts resembles an Arctic Cat dealership. 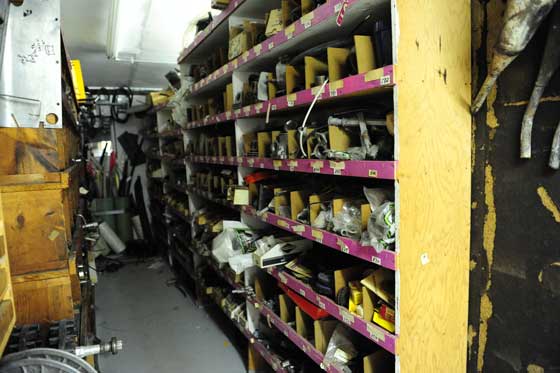 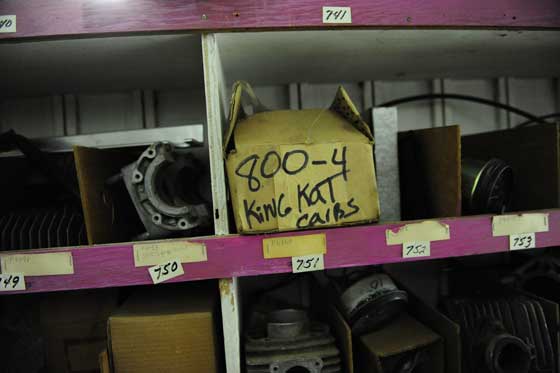 You never know when you might need an extra set of carbs for your 800 King Kat. 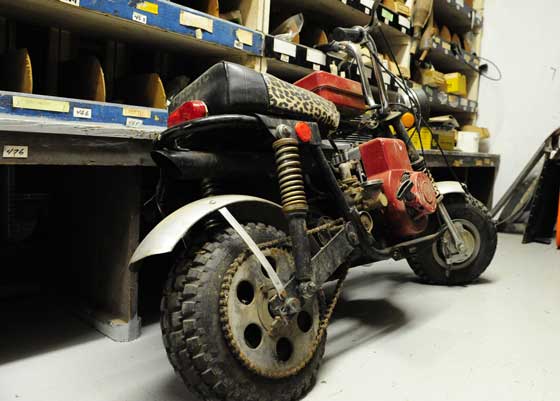 Or an original Arctic Cat minibike. 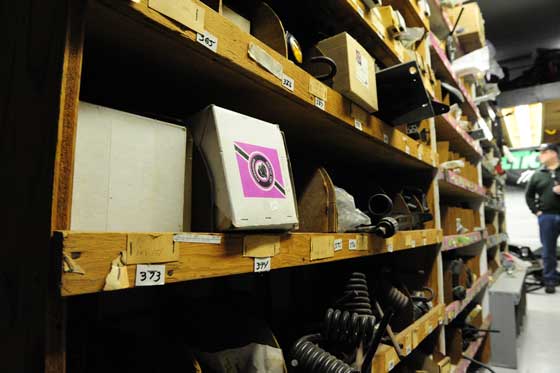 The many black-and-purple Arctic Enterprises logos stand out among the hundreds, perhaps thousands, of NOS parts. 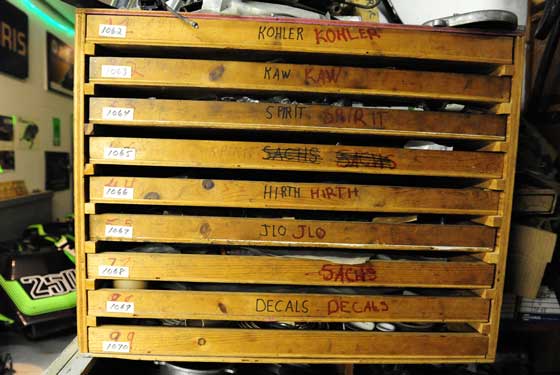 What, no Wankel drawer?!? 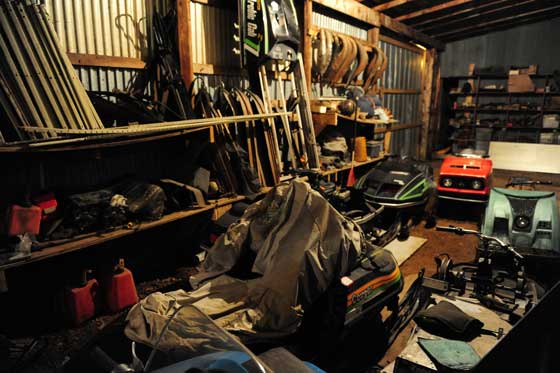 When Rich mentioned that he had sleds and parts tucked away in other buildings and basements, I begged and pleaded for a quick look. 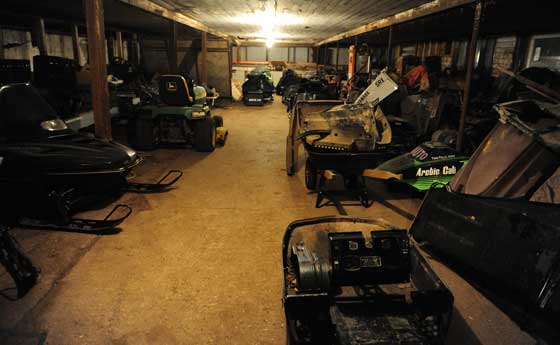 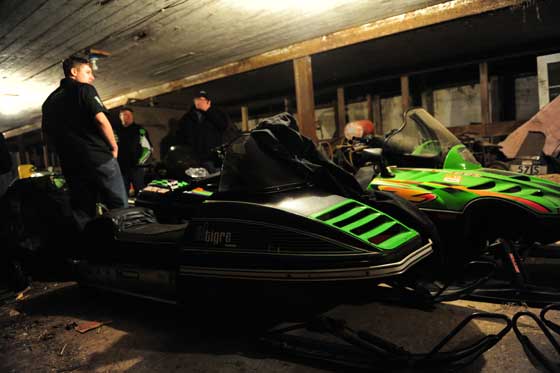 Rich figures that, in addition to the 30-plus sleds that are on display in the main room at the Zedshed, he has another 20 or so projects that are in need of completion.

In fact, he’s no longer actively accumulating machines; rather his focus is now to complete those remaining 20. 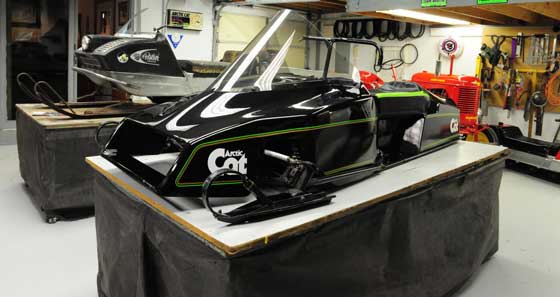 One such project is this 1981 Sno Pro oval racer. 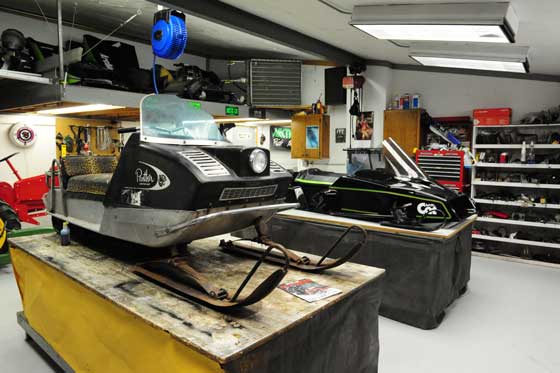 As well this Panther. 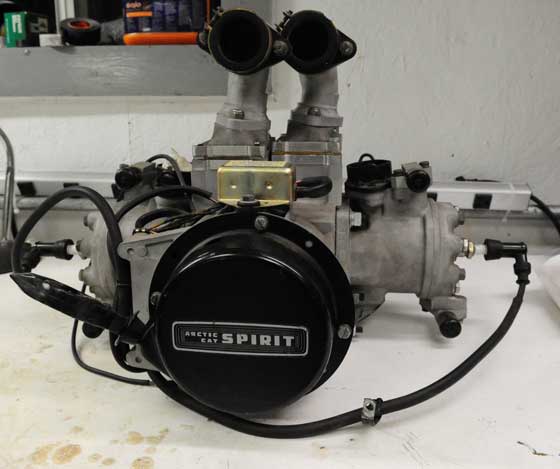 As an Arctic Cat drag racer, Rich has/had a very strong connection to the Neuman family of Cat drag racer/builders. This is custom opposed two-cylinder that Clayton Neuman fabricated. Amazing. 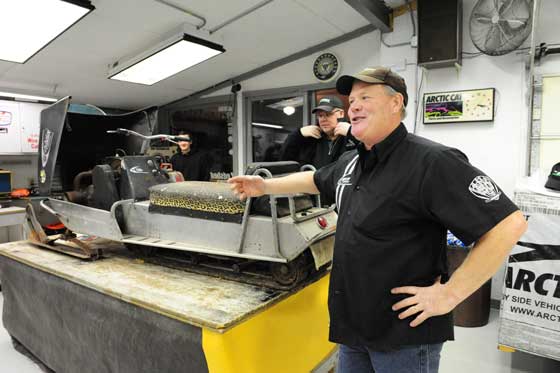 One of the great discoveries for me that evening was listening to Rich talk about the great people he’s met in the vintage hobby, particularly those who he’s sold-bought-sold the same sleds with over and over again.

“Every month we have a mortgage payment, so sometimes I have to sell a sled to a friend or another collector,” says Rich. “But many times I end up buying back that same machine. I’ve owned some sleds three or four times.”

And so the party gently unfolded throughout the evening, with dozens of conversations about everything Arctic Cat. 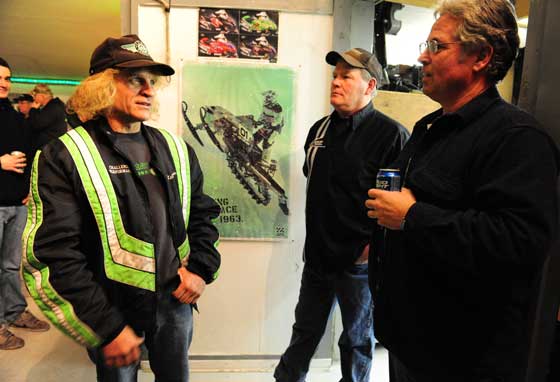 Get a bunch of racers together and of course the conversation will be about racing. Here engine builder Keith Badour (L) chats with Rich and Team Arctic vintage champ Mike Smith (R). 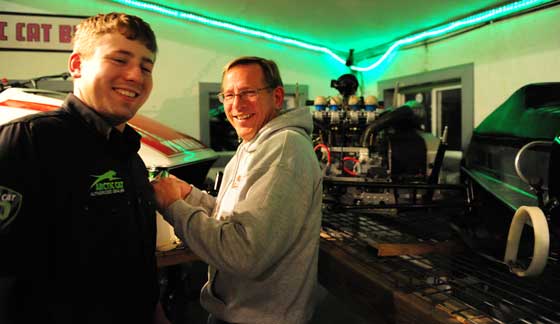 And there were many smiles as stories were told, like those shared between Jim Dimmerman (R) and his son Jimmy. 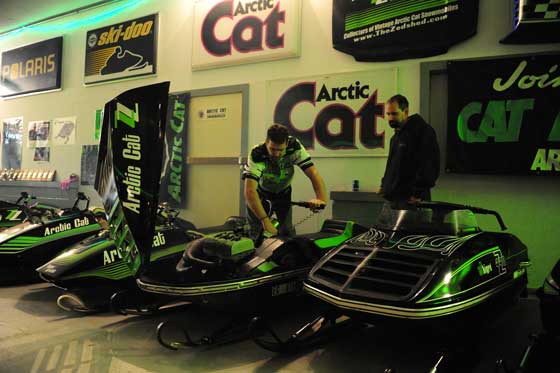 Punctuating these conversations were the occasional bursts of life from an engine that was started. 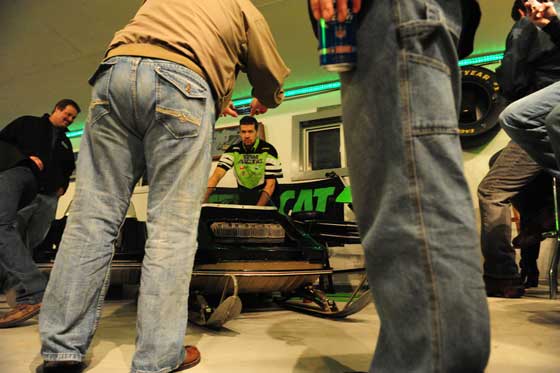 One of the many highlight that evening was when Andy Berends fired up the four cylinder King Kat 800. It was the first time I’d ever heard one in-person, and the sound was intoxicatingly beautiful. 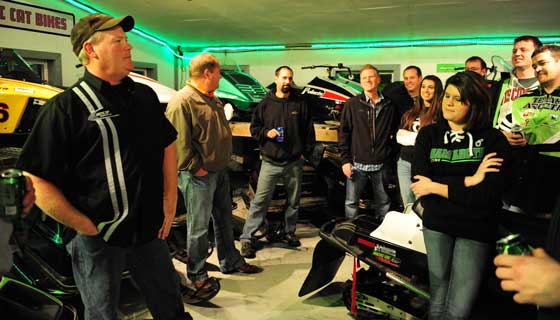 Great as it was to see, hear and sit on so many amazing Arctic Cat snowmobiles, the real treat this December night at the Zedshed was the people.

Here was a group of Arctic Cat riders that are as passionate as they are kind, who gathered together to share stories of past adventures while making plans for future ones.

When I think back on that evening at the Zedshed, I realize that it was a Christmas of sorts: It began full of anticipation and excitement; transitioned to the opening of presents (in this case, the seeing/hearing/sitting on sleds); before settling in to the relaxed, relationship-portion of the evening when everyone just shared and talked with one another in fellowship.

It’s that last portion of Christmas that I enjoy the most, and it’s what I was most grateful for during my experience at the Zedshed. 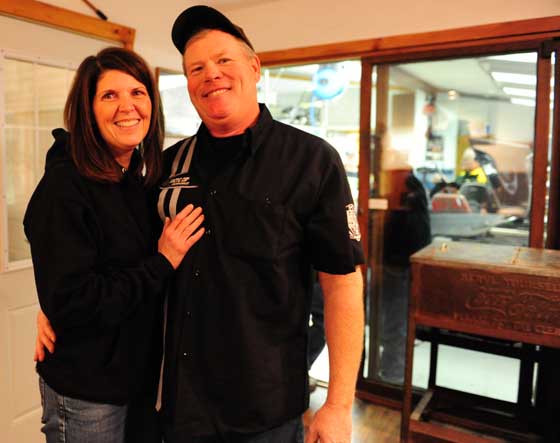 I want to thank Rich and his wife Linda for hosting truly meaningful, enjoyable Christmas party. You were wonderfully generous to open your barn to a flock of Arctic Cat sheep, to give us the gift of friendship and joy.