About To Go Green: A Q&A with Tucker Hibbert 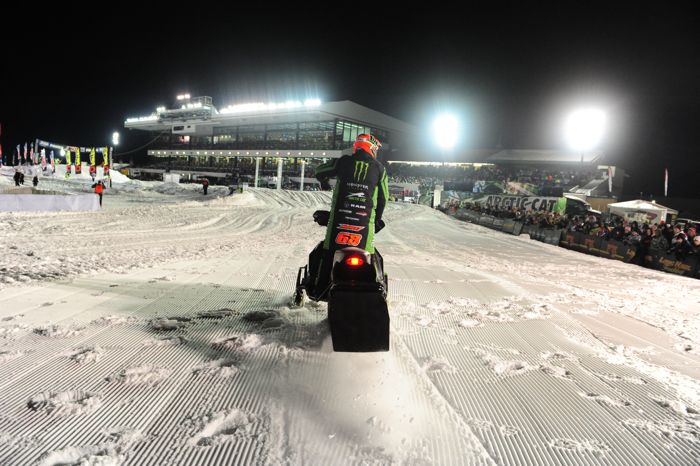 This Friday, Team Arctic snocross ace Tucker Hibbert will hit the gas on another season as the absolute commander of professional snocross racing, having won more races and championships than anyone in the history of the sport.

It’s GO! time with the 68 team, with just days before the green flags drops.

Yet somehow in-between building race sleds, stocking the race semi, testing and gearing up for Duluth, Tucker found time for an interview.

AI: What are you doing today, and this week?

Hibbert: The moment you called I was moving the tractor with the scraper on it so that a Monster delivery truck could unload our supply for the winter. But that was just a brief break from working in the shop with the rest of the crew. Today and this week are the same as every year prior to the Duluth race: everyone is going wide-open, working on sleds, the race hauler, the merchandise booth, gear and pretty much everything else.

We’re also getting the practice stuff ready – the gear and trailer – because there’s supposed to be some snow coming and the Christian Brother Racing track in Fertile, Minn., might be ready to ride this weekend.

Hibbert: It’s working from 8:30am to 10:30pm in the shop most days. Some days are a lot longer. It’s constant work for those hours other than eating dinner and sleeping. It’s always the same, every year. We’ve all gotten used to it, because we’ve been doing it for nearly 20 year. My dad’s been doing it even longer. It never gets easier, but we’ve all gotten used to it.

And really, it’s like this the whole season but with just a little more pressure before the first race. I think most teams are in the same situation.

AI: I think there’s a common misperception about what it is you do besides racing. I’m referring to stuff like working on the sled, the race trailer, getting your race gear prepped. It’s not just working out and racing, is it?

Hibbert: I wish it was, but unfortunately it’s not. It’s difficult to balance everything that has to get done to make our program work. So I’m also really involved in engineering parts, building sleds, working on sleds. Nobody on team has job description. We all just focus on what’s most important on any given day.

AI: How did the off-season go for you?

Hibbert: It was okay. So much of it was spent dealing with my wrist injury. I’ve had several injuries throughout career, so it’s a matter of dealing with it. Because of the wrist, this year wasn’t what I wanted as far as motocross and mountain bike racing. I’m a racer: it’s what I want to do all the time. I did some MTB racing, but not moto. 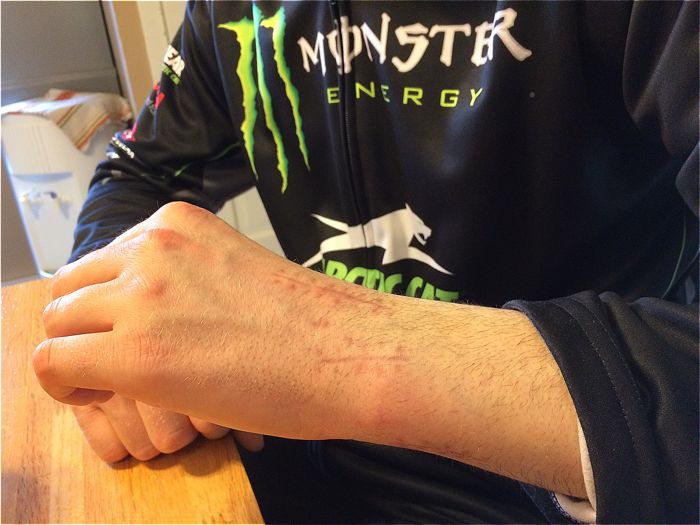 AI: What exactly was your wrist injury, and what was the process of fixing and healing from it?

Hibbert: I tore two ligaments in my left wrist racing last winter. It was the second time in my career that it happened. The first was in 2010. The wrist was in need of repair so I had a big surgery right after the snocross season ended. It took all summer to heal, and I wasn’t able to do much during that time. It’s taken a long time and it’s still not 100 percent ready, but I feel like it’s close.

AI: Did that injury impact your last season?

Hibbert: Not really. It happened at the Michigan national, with three races to go. It’s an injury that still allows me to race, but it’s just not stable. I had to use a wrist brace and ride more careful than usual, but I could still ride. I wasn’t able to practice as much as normal, but I don’t think it affected my results.

AI: Will this impact the upcoming season? Where are you at on the scale of being ready?

Hibbert: That’s hard to say, I wish I knew. As far as overall preparation, I don’t have as much seat time on the sled as some years’ past. So in that sense I’m not as prepared as I want. The wrist keeps getting stronger and more flexible, so I’m planning to work into season a bit. Fitness wise and mentally, I’m as good or better than I ever have at one-week-to-go.

AI: That’s good. How about your sled…will you race with the new EFI system this season, or are you sticking with carburetors?

Hibbert: We’re for sure racing with EFI this season. Going to take a lot of testing to make sure we’re 100 percent ready with it, and we won’t race it until we’ve reached that point. We’re really excited about EFI and the work that Arctic Cat, Speedwerx and we have already put into it. It’s going to be a great package.

AI: What about the rest of your sled, are you making other changes and improvements?

Hibbert: We’re always changing the sled to find improvements, but not huge changes year-to-year during off-season. We prefer to constantly work and gradually improve on the sled, with different parts and pieces, instead of making huge changes.

EFI is going to be a big change, but we have a whole bunch of stuff we’re going to work into the sled during the year. That’s a fun part of this…constantly improving stuff.

AI: Any other changes to your program for this season…crew members…reprising the heel clicker finish line salute…special menu items in the race trailer?

Hibbert: (Laughs) I haven’t done a heel-clicker at Duluth for a long time. At this point in my career, I need to think ahead of time and practice whatever I’m going to try, because I don’t want to make a mistake.

It’s funny, but racers don’t do tricks like we used to. Remember after Blair started it all, then for a few years everyone did a trick when they won a race. Some guys even did tricks in the middle of the race (laughs).

I’m not sure if it’s good or bad [that the tricks have stopped]. It’s entertaining and fun when someone does it.

As far as other changes to our program, we have the same crew as last year: Dan Ebert; Rob Dahlen; my dad [Kirk}; Steve Houle; Kevin Krocak; Ashley Rambow; Luke Perrault; John Hanson, our photographer; and my wife Mandi. Something that’s a bit new is that my former mechanic Garth Kaufman is back with us on-and-off throughout the season to help with the sleds.

AI:  A racing career that began more than 20 years ago during which you’ve won what seems like 40 X Games Gold medals, 6,000 National finals and a few hundred championships… where do you go from here and how do you stay motivated to achieve more?

Hibbert: I don’t know (pause)…I don’t think about that stuff. I know that being successful means setting goals and working towards them, I just don’t set goals for particular records though. I have no goal for a number of wins, championships or how many years to keep at it. My motivation just comes from always wanting to do the best I can.

I’m still having fun and so is the team. I guess my goal is to have everything keep going the way it has been for all these years.

AI: What’s fun about racing at this point in your career?

Hibbert: I’ve raced so many times…(pause), it’s fun to be on the track and doing laps…I’ve done it so much and for so long. But a lot of the enjoyment past few years, has come from my team and the people I work with on a daily basis. The time we spend together getting ready and in the moments in-between the racing is so much fun! That’s the best part now. We all enjoy it, we all work super hard, get it done and enjoy the process. We’re making a lot of good memories and stories that we laugh about all the time. 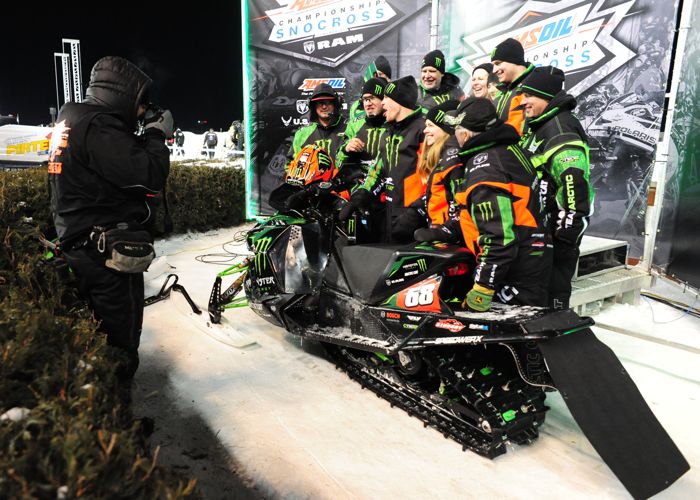 AI: That’s really cool and it’s something I can see whenever I’m around you guys. How many more years of this?

Hibbert: I really have no idea. I think about that question more now than I did a few years ago. There are moments when I say to myself that I’m not going to do this for another year. Then the moment passes, the stress is relieved and I’m back to loving it.

So I can’t really answer the question with a date or a year. As long as this team is still having fun and motivated to go to the races, then we’ll keep racing.

AI: That’s cool, and I hope you keep having fun! Last question for today: What’s a recent Roger Skime story that you can share?

Hibbert: (Laughs) Recently I was on a road trip with my dad, who was driving. I was just killing time by going through and listening to voice recordings from over the years that I’ve save on my phone. They’re recordings, not voicemail, that I’ve made during all sorts of funny situations. I love doing that once in awhile because some of them [recordings] are so funny.

None them are labeled so I don’t know what I’m about to listen to. So I’m going through them and I started running into recordings of Roger, and I got to the one where he’s telling a story about a 4-stroke snowmobile from a few years ago that was in engineering shop at Arctic Cat. He and somebody else were trying to get it started, but having trouble. The electric start wasn’t working and they were trying to pull start it somehow. They felt it needed a little extra gas, so they wedged a glove into the throttle to open it up while they pulled on the recoil with two hands.

You can see where this story is going (laughs)!

The sled started, the throttle was stuck wide-open, did a big burnout, shots across the floor, hit a wall and then kept doing a burnout until they ran over and stopped the engine. (Laughter)

I recorded the whole story while he was telling it to us in the race trailer. It was awesome! I have a lot of great stories that he tells: the sled falling into the glacier; a few rental car stories; funny things from when he used to race that he still remembers so well. It’s so funny imagining him as a young guy doing these crazy things. Actually, he’s still doing some crazy things!

AI: And THAT is just one more reason why Roger is the best! Thanks for the interview Tucker, good luck this weekend and this season.

Hibbert: Thanks, it’s going to be fun. 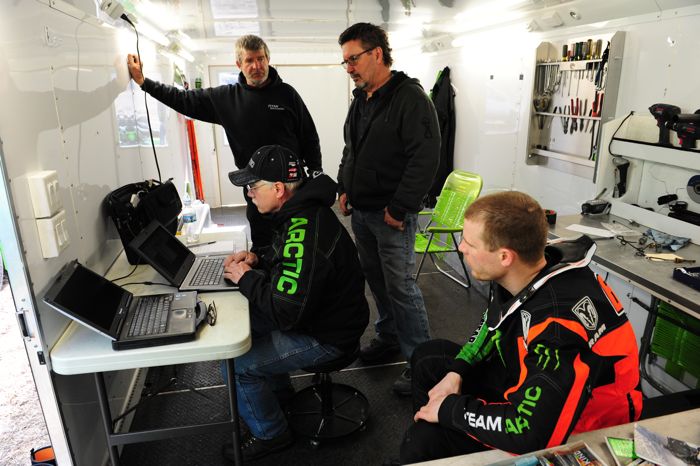 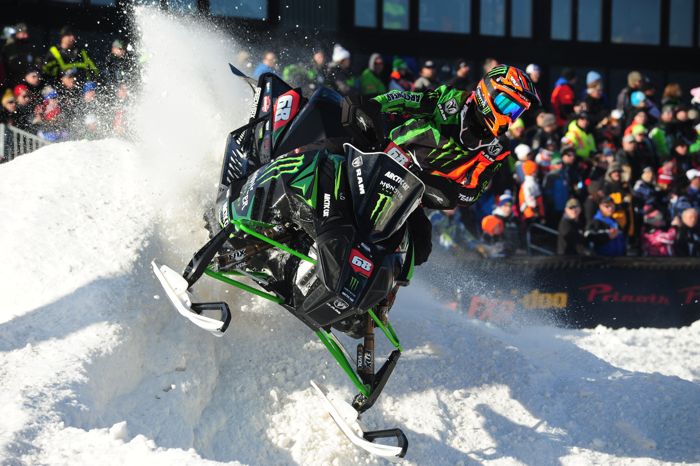 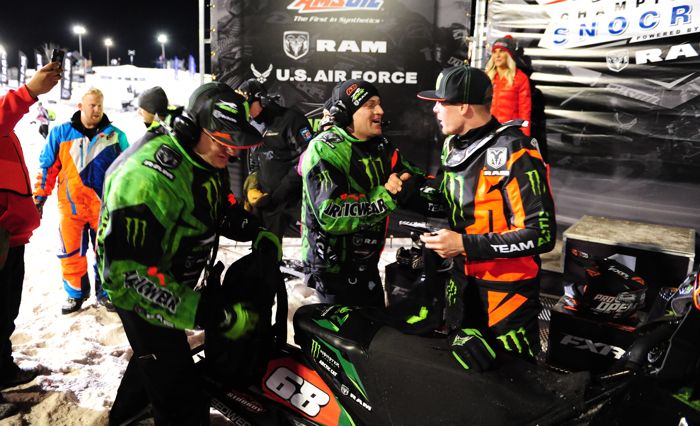 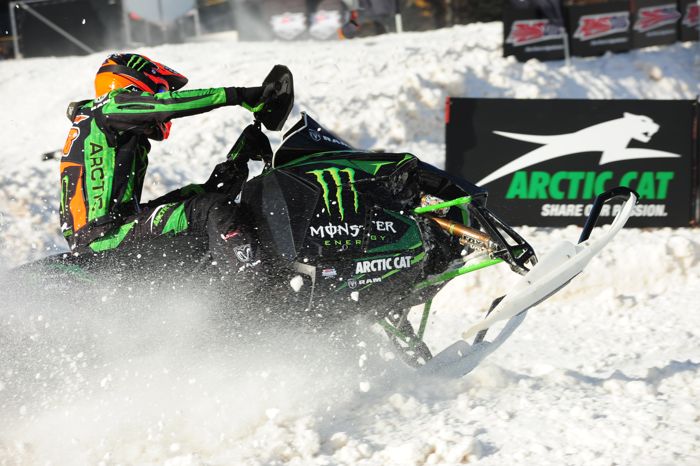 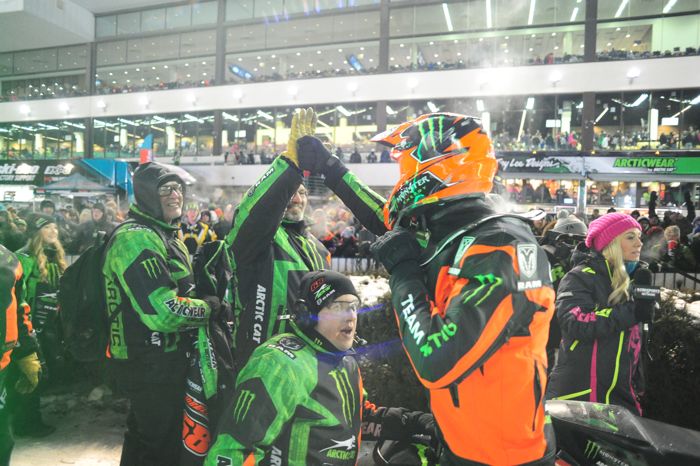 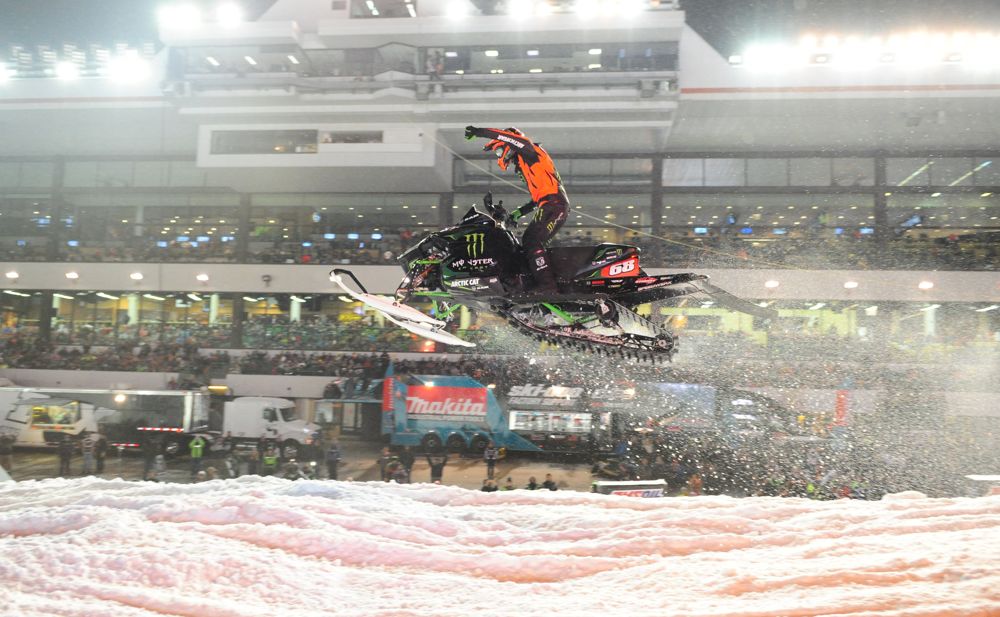 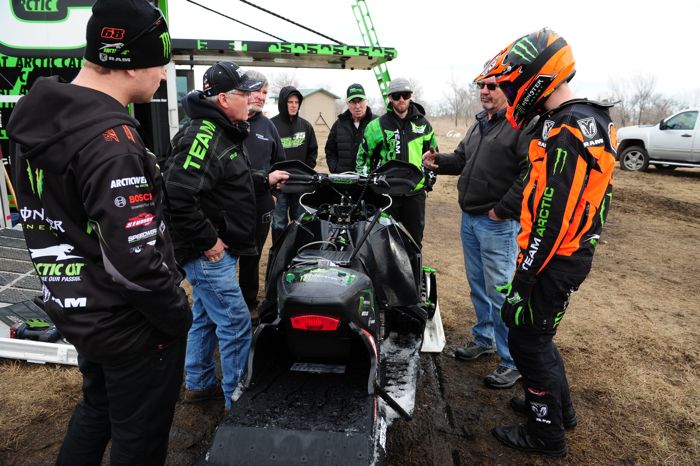 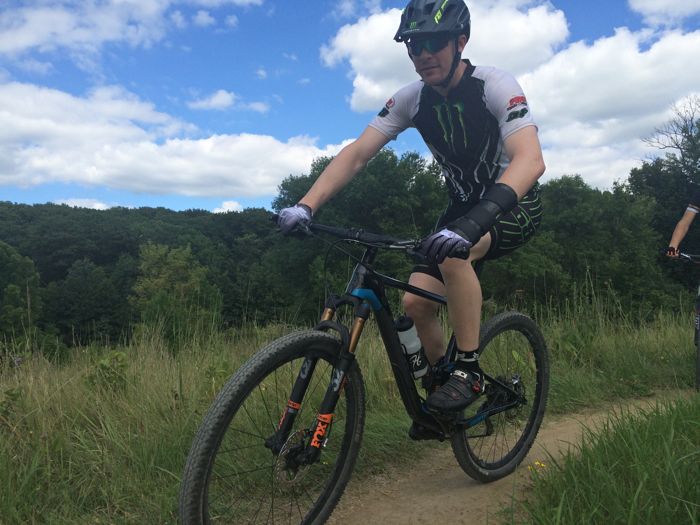 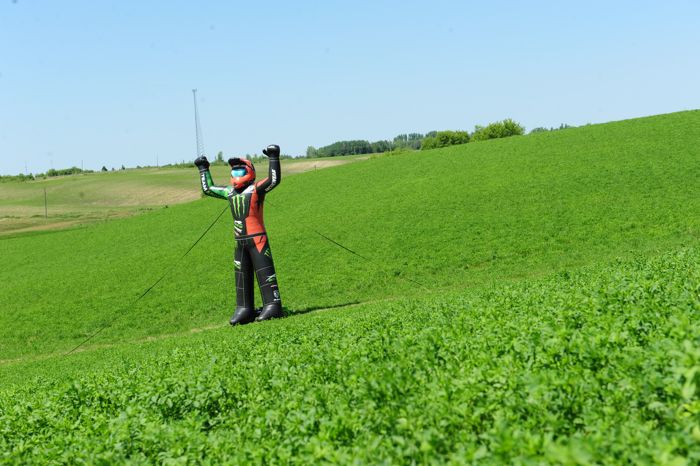 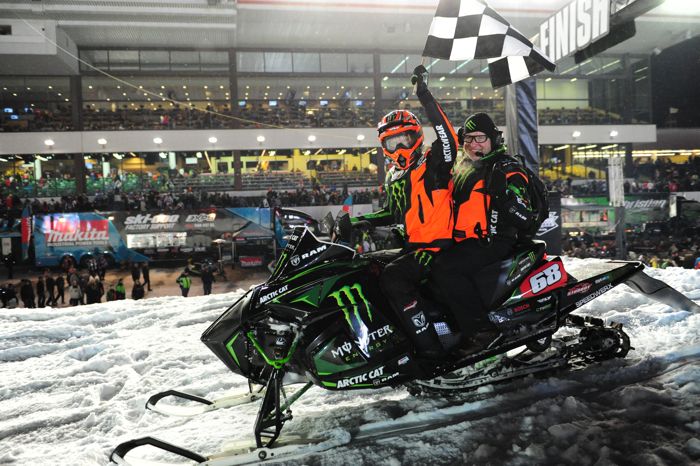