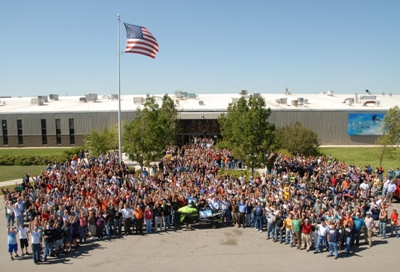 *Sales driven by snowmobiles and side-by-sides;

Commented Claude Jordan, Arctic Cat chairman and chief executive officer: “We had strong double-digit sales gains in side-by-sides and snowmobiles that led to record second-quarter sales, on top of a record prior-year period. However, ATV sales in North America and Europe fell short of our expectations in the quarter, and the lower volume reduced our profitability.”

Jordan added: “We are maintaining our full-year outlook for fiscal 2014, but expect a challenging second half of the year. Arctic Cat posted outstanding performance in the fiscal first quarter, which is reflected in first-half sales growth of 6 percent and earnings up 7 percent. We anticipate continued strong dealer demand for side-by-sides and snowmobiles, and the new Wildcat models that we expect to introduce in our fiscal second half. In addition, we continue to focus on operational excellence and cost controls that will enhance our efficiency and profitability.”

*Gross profit margins were 25.9 percent compared to 28.0 percent in the prior-year quarter, due to product mix, Canadian currency impact, and increased sales incentives driven by double-digit retail sales increases in the ATV/side-by-side business. Including the lower-margin Yamaha sleds that Arctic Cat is supplying, combined with the Canadian currency impact, Arctic Cat expects fiscal 2014 gross margins to be approximately 80 basis points lower than the prior year.

*Operating expenses rose slightly to $25.4 million versus $25.3 million. The company continued to increase investment in research and development, which was up 29 percent from the prior-year quarter, to ensure a strong pipeline of new products and technologies, while maintaining strict cost controls.

*Operating profit was $36.3 million versus $38.8 million in the year-ago quarter.

*Cash and short-term investments totaled $40.1 million, up $16.1 million versus the same quarter last year. The company had no debt.

ATVs/Side-by-Sides – Sales of Arctic Cat’s all-terrain vehicles (ATVs) and side-by-sides increased 4 percent to $72.7 million, up from $69.7 million in the same period last year, primarily due to strong orders for the Wildcat X and the four-seat Wildcat 4 pure sport side-by-sides.

Said Jordan: “Our side-by-side business performed well in the 2014 second quarter, with continued strong growth in our Wildcat and Prowler HDX models in North America and international markets outside of Europe. However, second-quarter sales of ATVs in North America were lower than we anticipated, combined with ongoing economic headwinds in Europe, both of which contributed to single-digit increases in our ATV and side-by-side sales to dealers. On the retail side, we saw strong double-digit sales gains for our ATV and side-by-side business in the fiscal 2014 second quarter, due to consumer demand for our new products. As a result of lower wholesale and higher retail sales, our ATV dealers now have an improved inventory position that should translate into increased dealer orders going forward. Additionally, with the new side-by-side models that we intend to launch in our fiscal third and fourth quarters, we anticipate solid performance in the second half of the fiscal year.”

Arctic Cat remains focused on further increasing its ATV/side-by-side business as a percent of total sales. The company anticipates that this business will exceed 50 percent of total company sales for the fiscal 2014 full year. During fiscal year 2013, 45 percent of sales were in the ATV/side-by-side segment, up from 39 percent the previous year. The company continues to advance its growth strategy through new product introductions and international expansion.

Since entering the sport side-by-side segment with the Wildcat only a year and a half ago, Arctic Cat has rapidly extended its Wildcat line and now offers: Base and Limited models; the four-seat Wildcat 4; and the high-horsepower Wildcat X and Wildcat 4X. Further, the company has announced that it plans to begin shipping a 50-inch wide, trail-legal Wildcat in late fiscal 2014. With a narrower stance, the 50-inch Wildcat will allow riders access to authorized ATV trails, making it a versatile option for consumers.

Snowmobiles – Snowmobile sales in the fiscal 2014 second quarter increased 5 percent to $135.4 million, up from $128.6 million in the prior-year quarter.

Commented Jordan: “We are pleased with consumers’ early season retail response to our 2014 model year snowmobile line-up. In addition, our expanded relationship with Yamaha continues to proceed smoothly. We expect to begin shipping a larger number of snowmobiles to Yamaha in our 2014 fiscal third quarter.”

For the 2014 model year, Arctic Cat launched 10 snowmobiles, including the all-new ZR 6000 El Tigre high-performance sled, and new snowmobile engine options from Arctic Cat and Yamaha through an engine supply agreement. Arctic Cat also introduced its first designed and built snowmobile engine, the 6000 C-TEC2, which is a powerful, lightweight and fuel-efficient 2-stroke that enables the company to enter the large 600cc snowmobile market segment that now accounts for 18 percent of the snowmobile industry.

Parts, Garments & Accessories – Sales of parts, garments and accessories (PG&A) in the fiscal 2014 second quarter totaled $30.4 million, down 1 percent compared to $30.8 million in the prior-year quarter. Strong growth in parts and accessories was offset by lower garment sales. Arctic Cat expects its PG&A business to grow in the remainder of fiscal 2014 through further expansion of its Wildcat accessories offerings.

For the fiscal year ending March 31, 2014, Arctic Cat is maintaining its sales and earnings guidance, but is targeting the lower end of the guidance range. The company continues to expect earnings in the range of $3.27 to $3.37 per diluted share, an increase of 13 percent to 17 percent over prior-year earnings of $2.89 per diluted share. The company anticipates sales in the range of $754 million to $768 million, an increase of approximately 12 percent to 14 percent versus fiscal 2013.

Arctic Cat’s fiscal 2014 outlook includes the following assumptions versus the prior fiscal year: core ATV North American industry retail sales flat to up 5 percent; side-by-side North American industry retail sales up 15 percent to 25 percent; snowmobile North American industry retail sales flat to up 3 percent; Arctic Cat dealer inventories, excluding new products, flat to up 10 percent; achieving slightly lower operating expense levels as a percent of sales; and increasing cash flow from operations. The company expects gross margins to decrease by approximately 80 basis points, due to additional Yamaha snowmobiles that will be built in Arctic Cat’s factory and, to a lesser extent, the Canadian currency impact. Most of the Yamaha gross margin impact will be experienced in the fiscal 2014 third quarter, as Arctic Cat ships a large number of Yamaha snowmobiles.

“Based on our first-half results and prospects for the balance of this fiscal year, we remain confident that we will achieve another year of increased sales, record earnings and enhanced shareholder value in fiscal 2014,” said Jordan. “We continue to expect our growth to be fueled by a strong pipeline of innovative new products and technologies, further market share gains in the growing side-by-side segment and greater operating efficiencies.”