The rumors and whispers about Arctic Cat and Yamaha have proven to be true. Well, at least some of the rumors anyway.

Today Arctic Cat sent THIS one-page press release announcing an expanded agreement with Yamaha Motor Company, in which there are some telling details yet also some key pieces of info that are not (yet) given.

I want to break down what it appears we “know,” speculate a bit on what we can read between the lines and offer a few opinions on what all this means.

What we “know” is best illustrated by couple of statements in the release.

“Arctic Cat Inc. announced today that it has entered into an engine supply agreement with Yamaha Motor Corporation… This agreement has now been expanded to include select 4-stroke engines from Yamaha.”

Although it doesn’t explicitly say “no 2-strokes from Yamaha,” it seems like this statement dispels the rumors of a Yamaha-built “clean” 2-stroke engine, at least for now.

This sounds to me like Arctic Cat will build some (keyword: “select”) full-sized performance sleds, rather than ALL Yamaha snowmobiles as some have speculated.

What Arctic Cat hasn’t yet made public is which Yamaha engine(s) it will source for its sleds beginning next year, although a quote from CEO Claude Jordan might provide a clue:

“Combine that with the new performance engine options from Yamaha…” 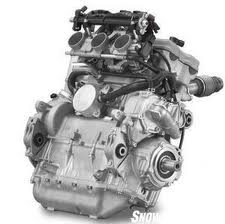 Given that its “new performance engine options,” it could mean a combination of these variables:

1. The three-cylinder 1049cc triple used in the Nytro and Vector (shown at the left)

2. The four-cylinder 998cc whopper used in the Apex.

Maybe Arctic Cat considers the 973cc carbureted triple used in the Venture and 499cc EFI twin used in the Phazer as “performance engines,” but I don’t.

UPDATE: Now that Yamaha has released their 2014 snowmobile information, we can see that they’re using the 3-cyl. 1049 engine with an Arctic Cat chassis. What this says about the Arctic Cat sleds with Yamaha engines remains to be seen.

As I read in-between the lines of what Arctic Cat executives say, it’s evermore clear that we’ll soon see Arctic Cat-manufactured engines produced in its St. Cloud facility. To wit from Arctic Cat’s Snow Division Vice President and General Manager Brad Darling: “The engine purchase agreement with Yamaha, combined with the engines that we plan to manufacture in house, will provide Arctic Cat’s customers with the most well-rounded engine choices when it comes to technology, reliability and horsepower.”

And then CEO Jordan: “… as well as our state-of-the-art engine manufacturing facility in St. Cloud, Minnesota, and we guarantee there will be exciting years ahead for Arctic Cat enthusiasts.”

Given that Arctic Cat has said it will purchase 4-stroke engines from Yamaha, I suspect that the engines to be produced in St. Cloud will be of the 2-stroke variety.

Is it strange and unsettling to hear that Yamaha and Cat have an expanded relationship? For sure, which I think is natural.

I would understand if Arctic Cat dealers feel uneasy about Arctic Cat producing Yamaha snowmobiles, as they’ve sold against this brand for decades.

I can also understand if this news will be tough for some Yamaha customers to digest.

Not to mention strengthened domestic manufacturing!

The next week and months will be very interesting.

What do you think?