I recently purchased two 1998 Jag 440s from the original owner. Outward appearing, you’re probably thinking, a 98 Jag is NOT a rare snowmobile. And youre right. But they are rare when they have consecutive VIN#s! You just dont see that very often!

I assume most of you reading understand what consecutive VIN#s mean, but for those of you that don’t, it means these two Jags went down the assembly line in Thief River Falls right next to each other (Not rare), were then shipped to a dealer together (Kinda rare) and then were purchased together by one consumer. (Rare!)

Above, you can see the VIN#s end in 803 and 804. For those of you who wonder what year a snowmobile is based on looking at the VIN tag, the common misconception is to think these are 1997 models. They were actually Manufactured 04/97 (April 1997) for the 1998 Model Year.

In addition to the VIN #s being consecutive, these have really low miles! One has 512, the other, 199!

So why the low miles? The original owner told me he purchased these new in 1997 for his twin daughters. He put large bows on them and “put them under the tree” for Christmas. His girls rode them for roughly three days, the bug of snowmobiling didn’t fancy them, and they went in the pole building until I purchased them.

Both were last registered in 2001, which the owner believed was the last time he rode the one with 512 miles on a trip with some friends.

Digging in a snowmobile seat storage trunk can be exciting, and often times disgusting after something has been parked for 20+ years. Either way, whatever you find, tells a story. As you can imagine, what I found in the trunk was really clean! 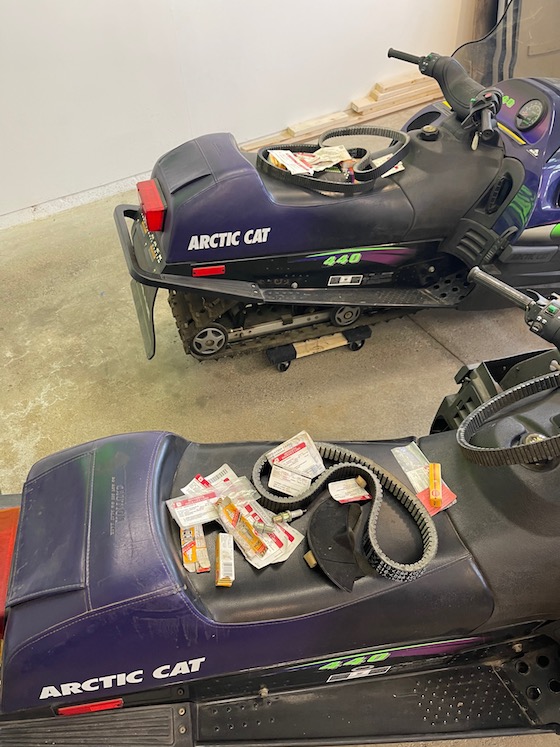 Fortunately, I didnt reach in to pull out any mice. Instead, I found the basic type stuff that would have been stuffed in the trunks as picked up from the dealer. Brand new spare belts, spare sparkplugs, and peace of mind knowing State Farm profited from these snowmobiles being insured every year despite not being used! Can a guy get a refund on that?

I found it pretty incredible the cardboard jacket from one of the spare belts was in great shape. No water damage at all!

Im fascinated by simple things…like the underhood tool kits AC used to employ in the late 90s. This one had never been touched, and potentially, never opened.

In each of the Jag tool storage cases, were these Original Operator and Safety manuals. Both in great shape with no water damage.

Underneath the hoods on each Jag, the 440 fan-cooled engines with electric start are dirty, but theyll clean up nice with a bath. Ill drain the gas and oil, clean the carbs and put in some fresh plugs along with new fuel lines and filters and get them running again. Ill share more of the story then. Enjoy a few more photos of these classics. 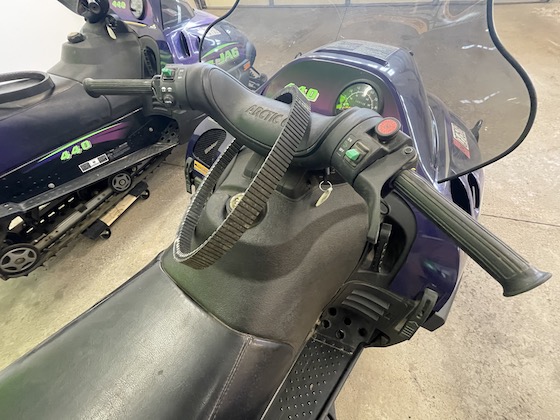