Better Than Marginal: First Ride of the Season 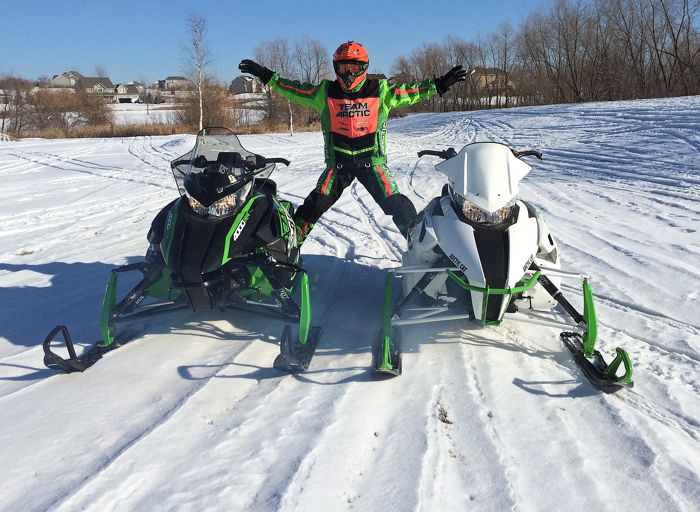 It had been at least a week since the last snowfall occurred where I live in Prior Lake, Minn. At best there were three inches of snowpack.

My son Cal had put multiple laps around the yard on his new 2015 Arctic Cat ZR4000 RR that he will race in USXC cross-country this season. I hadn’t yet put any time on my new 2015 XF6000 Limited.

Not enough snow, I had kidded myself into believing.

For some reason, this past Saturday the notion struck that we should at least attempt a short ride on the new iron. The worst thing that would happen is that we’d have to turn around. 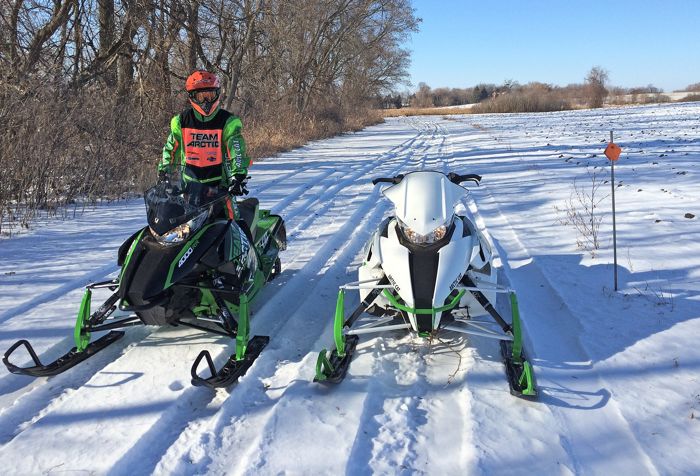 We’re lucky enough to live a stone’s throw from the Prior Lake Snowmobile Association trails. A short trip across a neighbor’s yard and a few hundred yards of a tree line bordering a farm field puts us onto a system that offers great fun and connection with the rest of the state trails.

Other than the tracks from the club members’ ATVs (when they placed the trail markers), we were the first to put tracks on this section of trail.

Looking at this photo, conditions suggest that riding was excellent for early Dec. 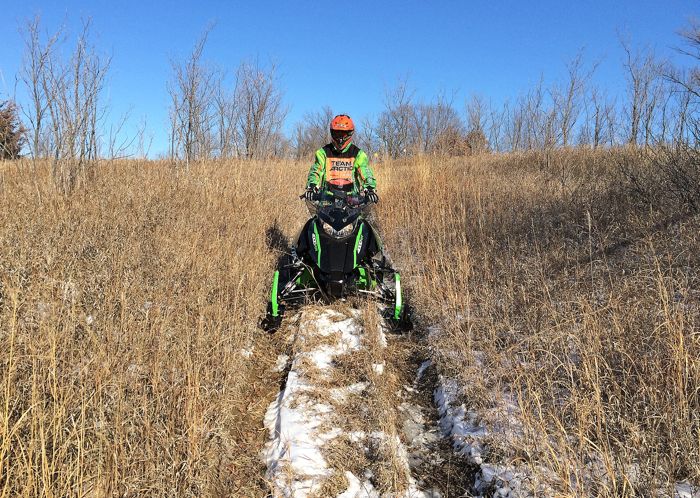 At this point, Cal asked me if we were hurting the snowmobiles. It was a fair question. 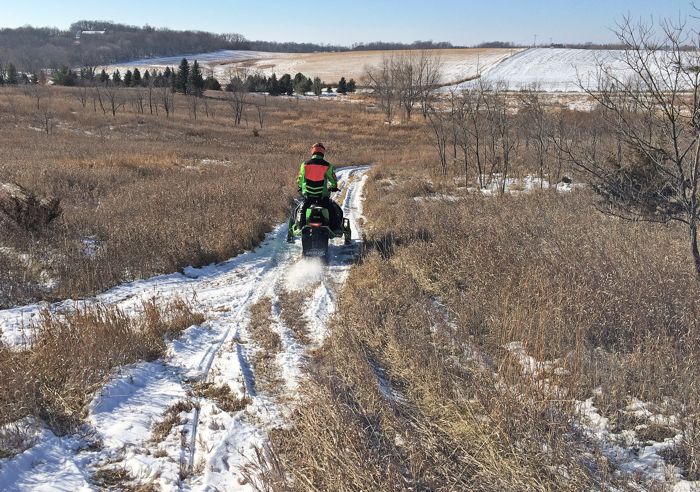 But the truth is that, even in the worst of the conditions this day, we never rode more than 20 feet without finding enough snow for the hyfax and cooling. So all was good. 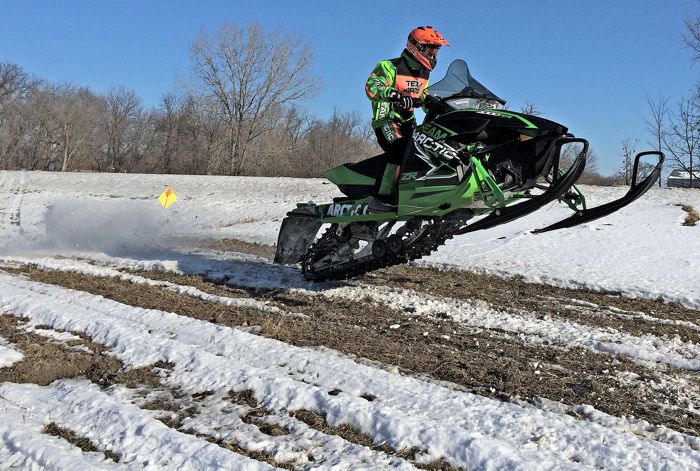 Once we hit the ditches the conditions proved rideable, and it wasn’t long before Cal was channeling his inner Zach Herfindahl and launching road approaches on his new RR. 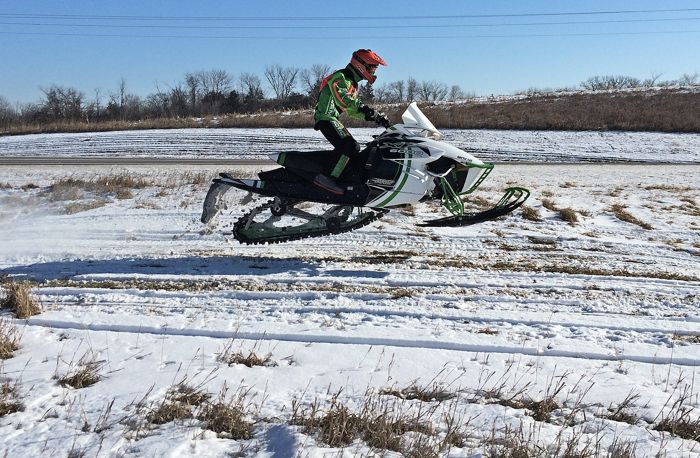 He did the same with my new XF as well, although he was quick to swap back to the ZR.

The ditches had already seen some traffic from other sleds, so we either had confirmation that the riding was okay, or that there were another dozen or so knuckleheads like ourselves. 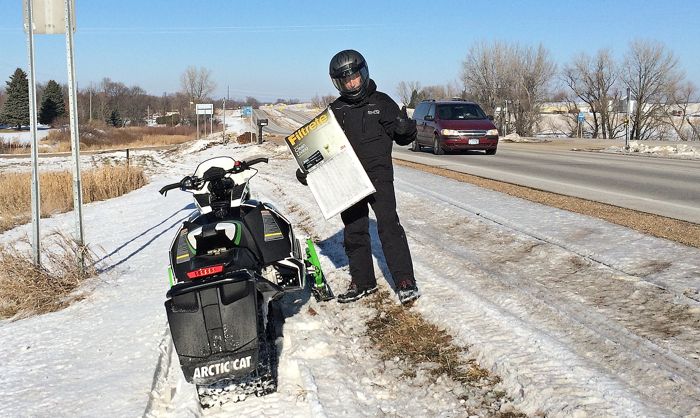 I’m usually pretty cautious during the first ditch rides of the season, when there’s less than the 8-12 inches that seems to be the required amount to bury the most debilitating of junk that’s accumulated during the summer and fall.

In 40 years of sledding, I’ve never been the guy to unwittingly find the car battery, bowling ball, truck rim, gas grill or whatever else fell out of Cooter’s truck and into the ditch. Nor do I want to be that guy, so I was taking it easy on this outing.

No, the new-in-the-package furnace filter would not have caused any problems had we hit it… 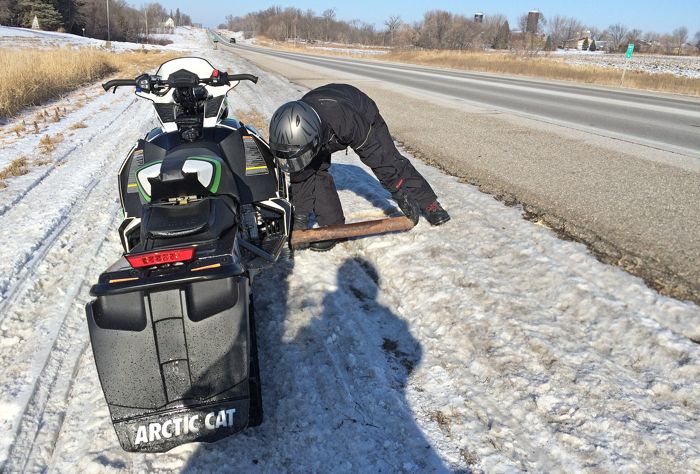 …but the 2-foot section of iron pipe would definitely have caused some carnage had I hit it. 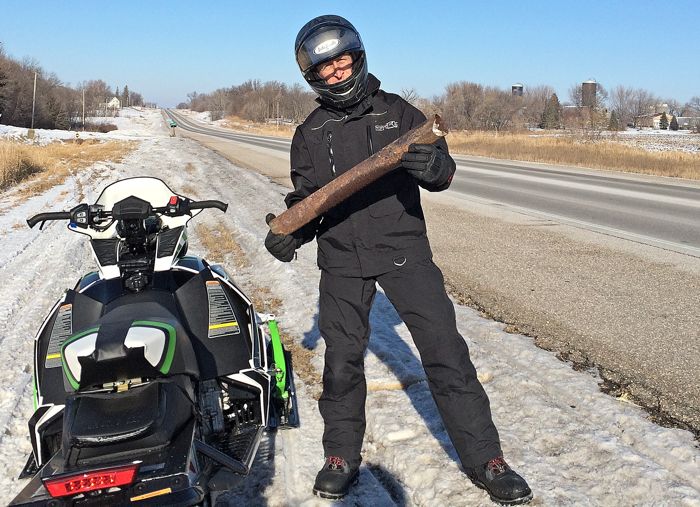 I believe this fell off the truck of my friend and fellow Arctic Cat rider Todd Ulschmid. Todd, please pick this thing up, it’s on Hwy 13 about 3 miles north of St. Patricks. 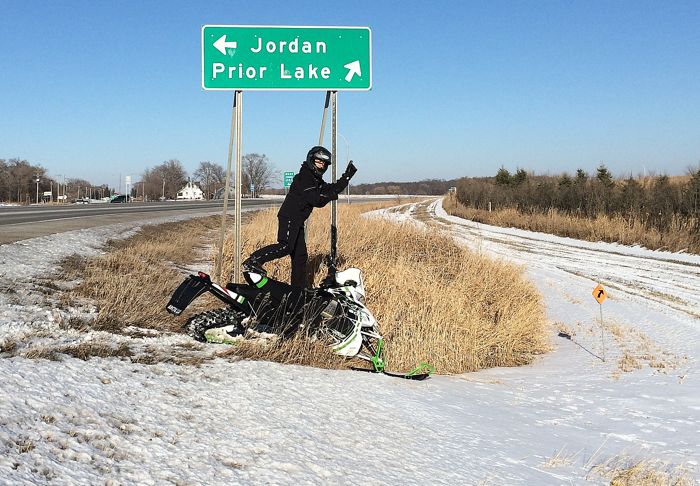 Having enjoyed the ditch between Prior Lake and New Prague, it was time to head home. But first we wanted to stop on a little lake nearby that we like to goof around on. 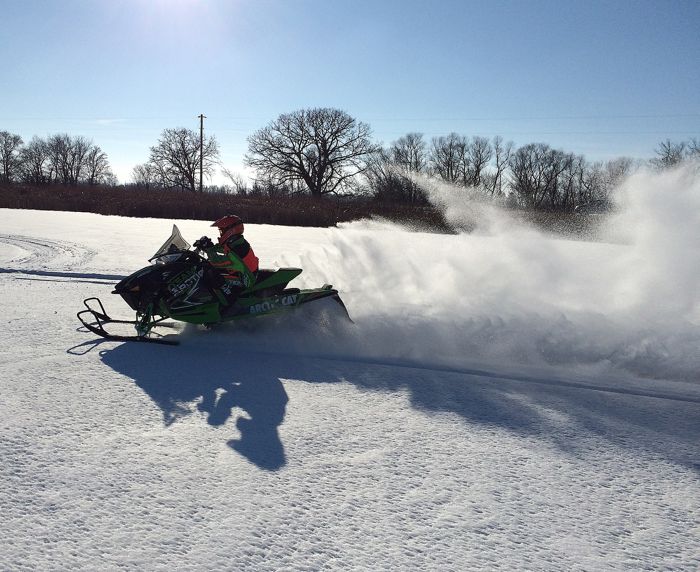 The name is Lake Cynthia, which is crossed by one of the local snowmobile trails.

There were a few tracks on it, as well as some motorcyclists (with studded tires). They had drilled some holes and reported 6-7 inches, so we felt comfortable enough to ride the perimeter and have some fun. 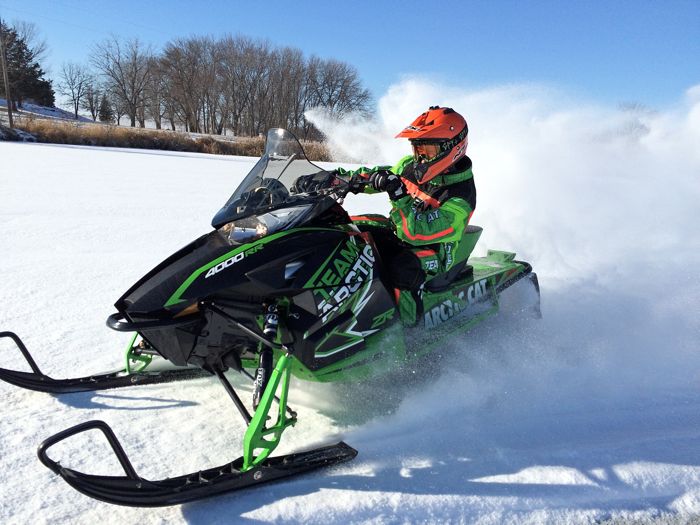 I love this photo because it looks like the middle of winter with tons of snow. 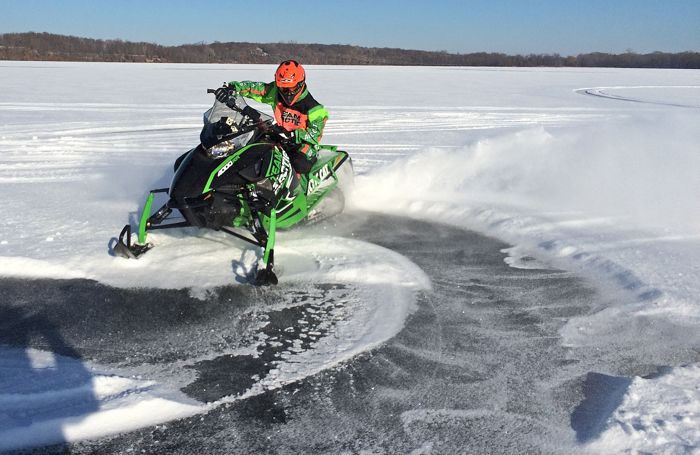 The best part of this ride, and what will make it memorable for years and years to come, was the perfect conditions for whipping donuts. It was ideal!

This was the first time that Cal had ever done this and of course he loved it. Who doesn’t!?! 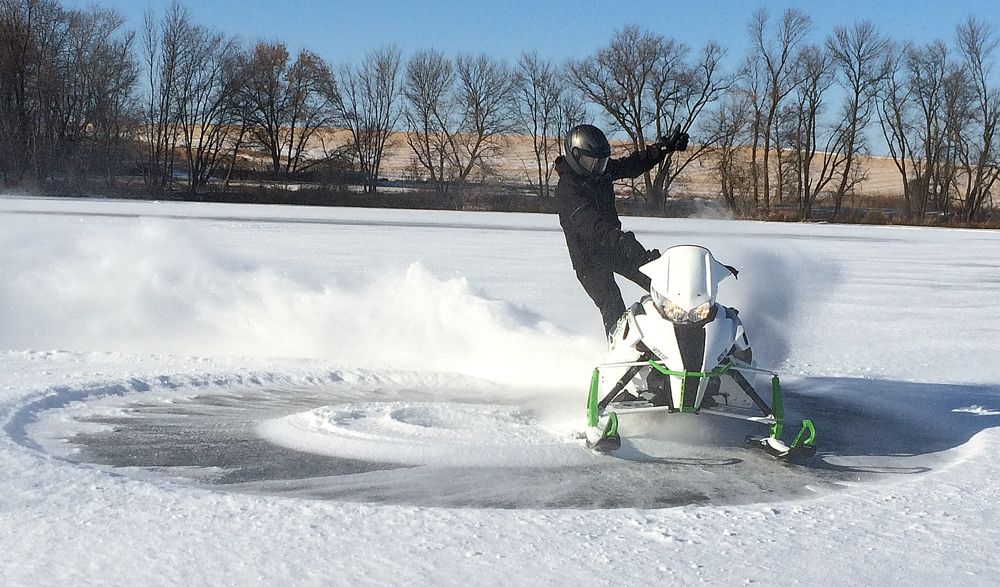 We played like this for 30 minutes or so, snapping pix and goofing around and laughing like crazy.

And then it was time to head home. 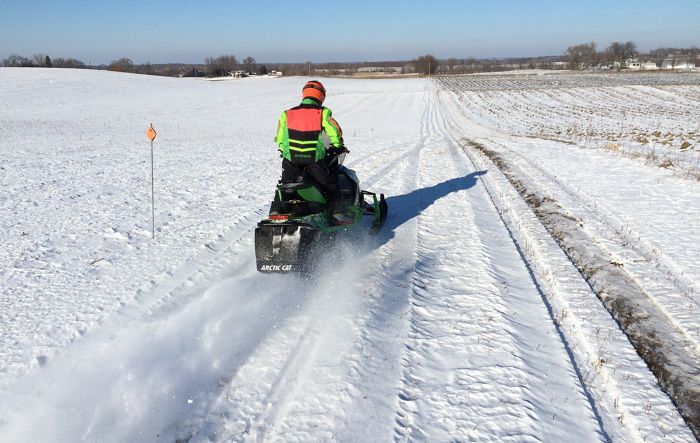 A few sections of farm field gave us a chance to see a little speed with the sleds. All good fun. 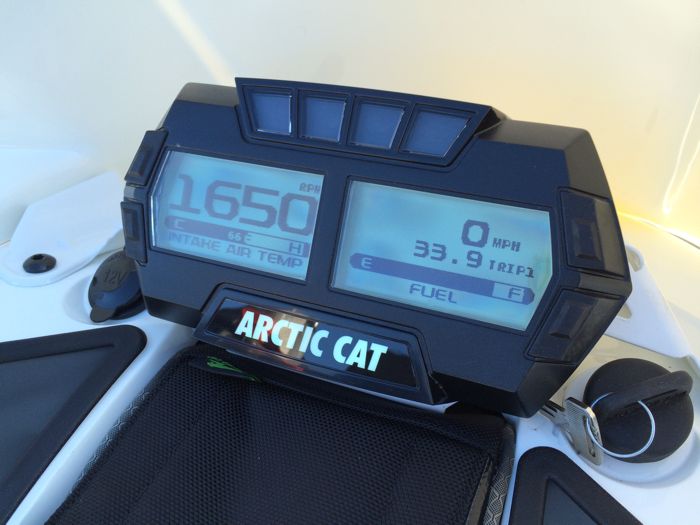 When all was said and done, the odometer showed 33.9 miles.

Prior to leaving on this ride, I would NEVER have guessed we’d log this many miles on the few inches of remaining snow in our area. Nor would I have predicted that absolutely wonderful time spent on Lake Cynthia, which gave us highlights and memories that will last for years.

This is the lesson that I continually learn and relearn over and over again: that instead of waiting for great or ideal conditions, we just have to take our chances and go for a ride. Every time I take the chance and ride, I end up with great experiences.

The weather for the next 7-10 days doesn’t look so great here in Minnesota, but we haven’t really even started winter yet. There’s January, February, March and April ahead of us.

I got my first ride in, here’s hoping you get yours sooner rather than later. My only advice: go! Even if the conditions look marginal.