Last weekend marked the 25th Annual Spirit National snocross in Duluth, Minn. And like every preceding year, it brought chaos, uncertainty, excitement, some great racing and, perhaps, a peek at what to expect for the rest of the season. 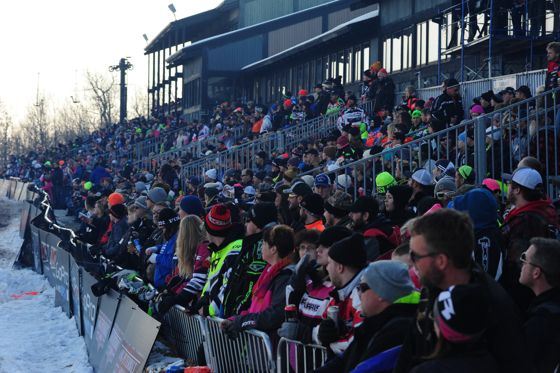 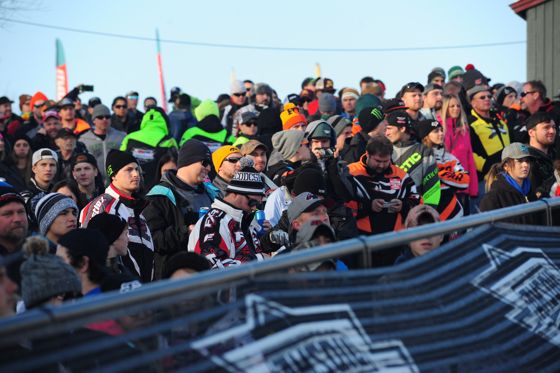 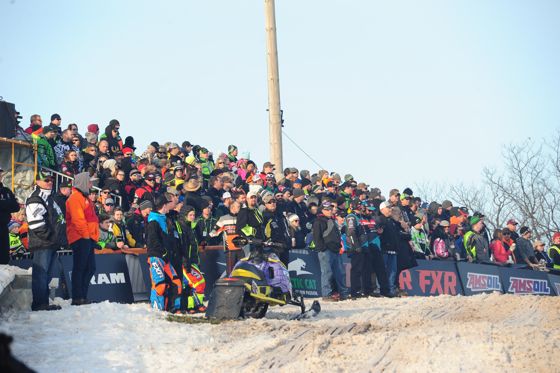 The crowd was huge this year, no doubt influenced by temperatures in the low 40s and the allure of the season opener. 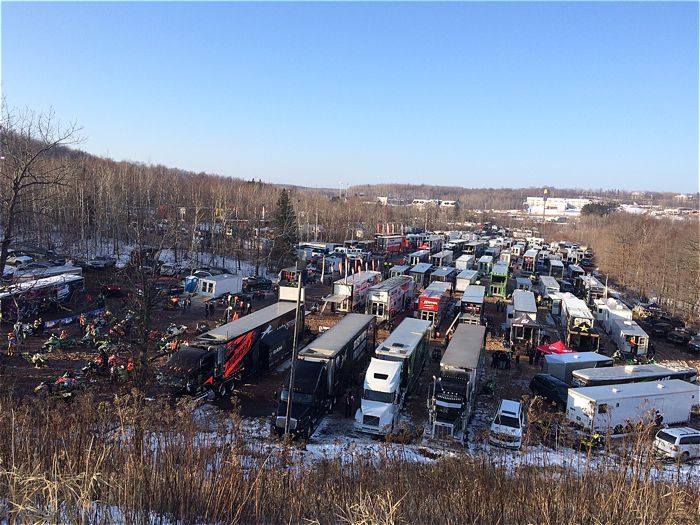 The semi-trailers in the pits were also huge this year, as they have been for the last decade or so. Racing at this level sure seems like it’s the domain of teams/families who are able and willing to spend cubic dollars. 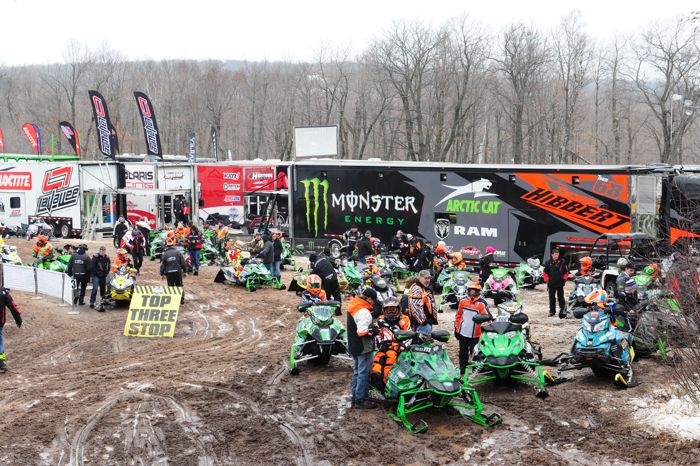 Speaking of the pits, this shot from Saturday morning was the best they looked all weekend. The Duluth pits have long been the bane of racers due to the carnage they cause to the sleds that navigate through the rocks, mud and crud. This year it got downright ugly by Saturday afternoon because of the mud. 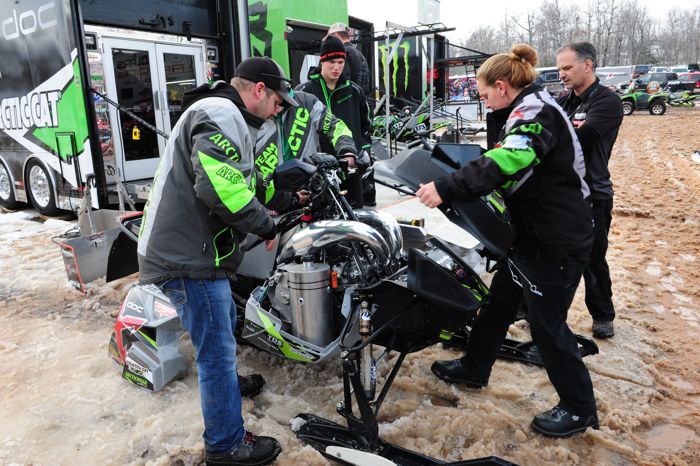 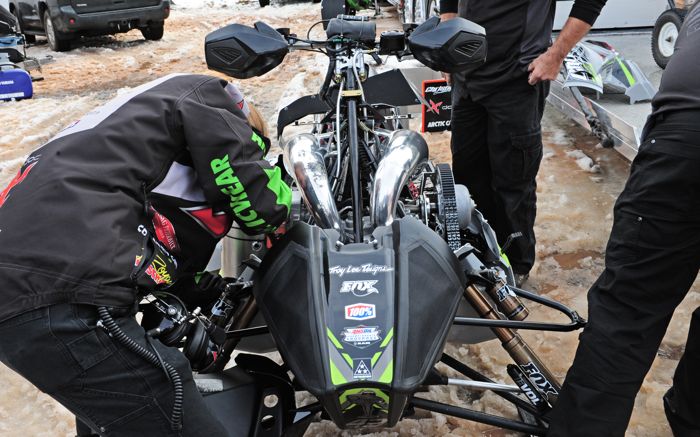 The big news for Arctic Cat snocross race sleds this year is the move from carbureted Suzuki 600 engines to Arctic Cat C-TEC2 600 engines featuring EFI. It’s the first time any brand has raced an EFI engine in snocross, and it’s been a HUGE project for Cat and its partner Speedwerx.

As with any new endeavor of this size, there are going to be a few hiccups that arise early in the season, especially one in which there has been so little seat time for racers due to lack of snow.

The Christian Brothers Racing crew brought both the EFI and carbureted mod sleds to Duluth for racer Logan Christian. A tiny mistake with handlebar heaters caused problems with the EFI system during the Friday night show, but the crew got things figured out before the racing began on Saturday.

Logan told me the EFI package is strong, probably just as strong as the carbureted engine, and that they’re pumped to get it calibrated better because they know there’s higher and more consistent performance available than with carbs.

Speedwerx and Arctic Cat engineers were on hand throughout the weekend, working with the Mod and Stock sleds. There will be improvements to both packages, despite the fact that both are already REALLY good. 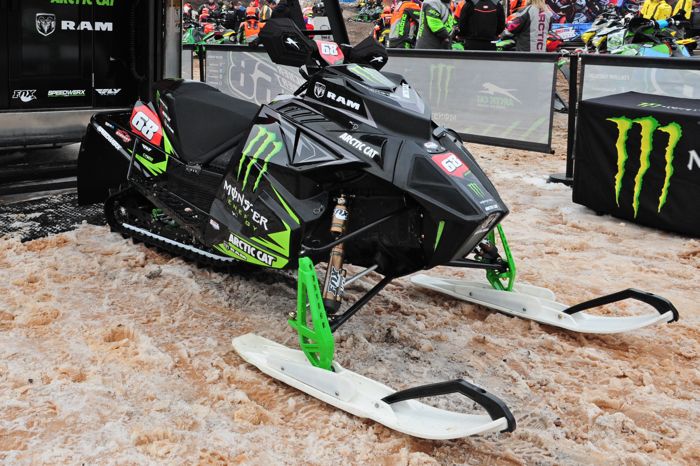 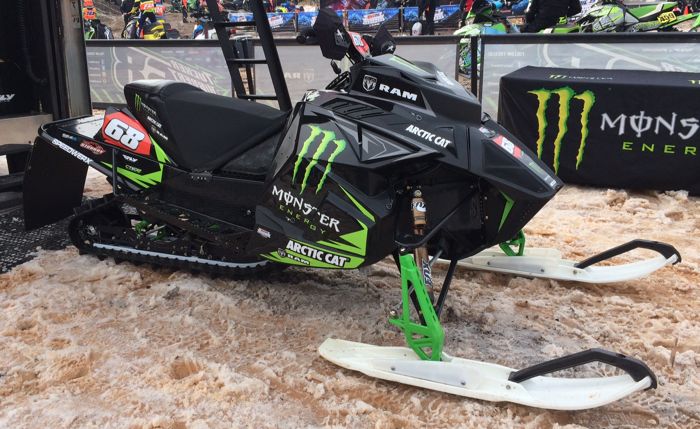 The new faux headlight pod on top of the mod Cats, as illustrated on Tucker Hibbert’s sled, was needed to accommodate the new exhaust pipe routing.

There is so much trick stuff on this sled that it’s mind boggling, and someday I’m going to do a story on it. But as long as he’s racing, Tucker (understandably) doesn’t want to share the info with the competition.

One thing I noticed at Duluth is that most of the Pro Open guys are now running 137-in. tracks, a move that Tucker (actually, Kirk) started last year. 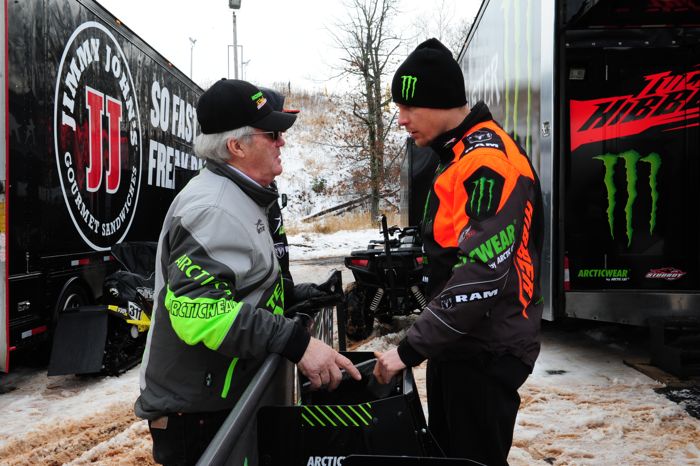 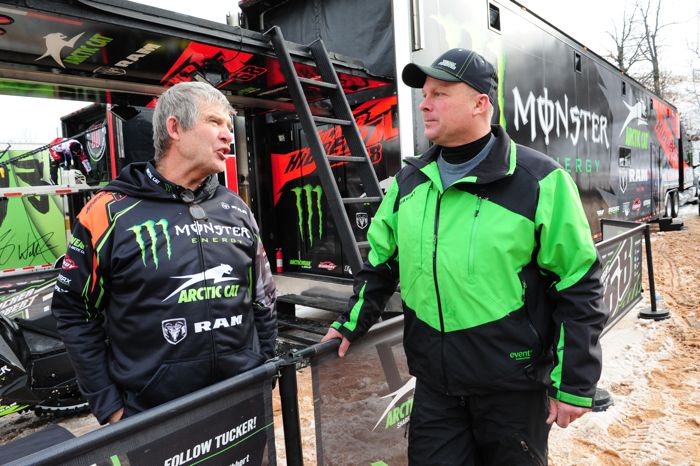 And here are two of Roger’s heroes: Kirk Hibbert (L) and Brad Pake, both Team Arctic racing legends; past winners at the Duluth snocross; and Snowmobile Hall of Fame inductees. 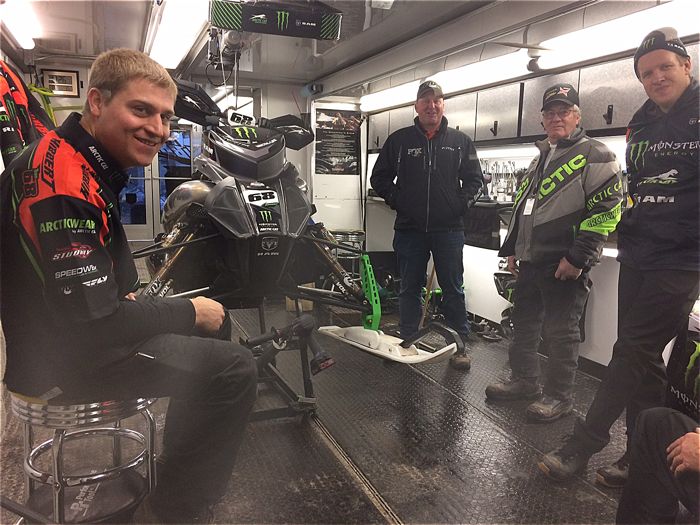 It’s always interesting to hear the conversations these guys have, especially at the first few races of the year, when they’re sorting out new sleds. The goal is to continually advance, to find gains and improvements wherever they can. Usually the focus is on the sled, but sometimes it’s gear such as goggles or gloves; what someone noticed about how the track develops after grooming; a better way to build a warm-up stand; and the like.

Racing attracts creative minds, and these guys are always brainstorming to find an edge. 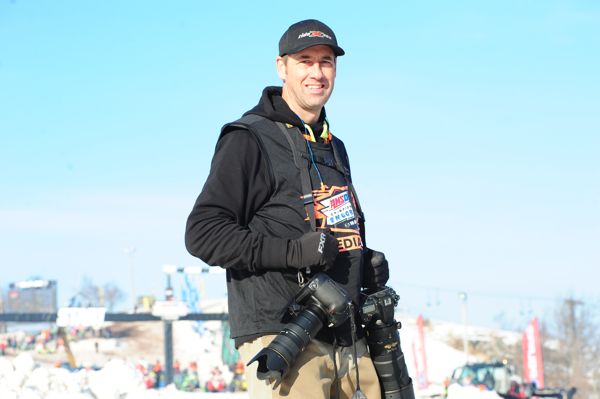 Speaking of creativity, this guy has loads of it: Gary Walton, owner of Action Graphics, RideX365.com and more Nikon cameras than you can shake a stick at.

In addition to his website and vinyl, Gary does PR duty for several top snocross teams. He’s been at the snowmobile media game for longer than just about anyone still playing, and he always has an interesting perspective on the snocross scene. 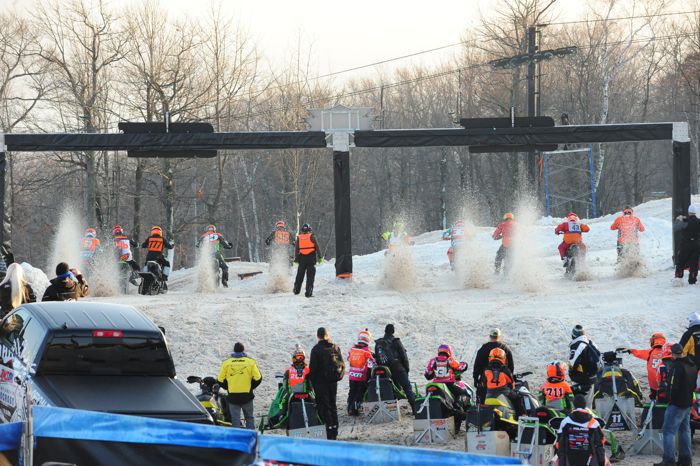 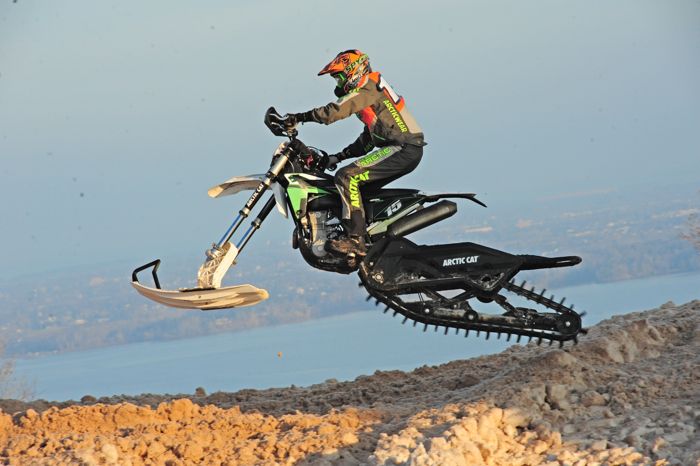 Snow bikes are something new this year for ISOC, who have a dedicated class for them at each national. Ten racers showed up: nine on various brand moto’s with kits, and one Arctic Cat SVX 450 being piloted by Wes Selby.

Despite all that, Wes and the SVX did awesome and ended up finishing in second place. The kid who won, Harris Huizenga, was BLAZING fast on his kitted Kawi. Clearly, he was no newcomer to snow bikes and was dialed-in to the situation.

My take-away from watching the snow bikes is that they need a different course than the sleds. Not necessarily a different layout, but different jumps and jump spacing. These machines will not launch and fly like dirt bikes. The downhill rhythm section was pretty brutal for the bikers, and the big table-top was too big for the bikes. If this form of competition is going to really grow, I have a feeling that the tracks will need to evolve in the process.

Either way, it’s going to be interesting to see unfold. 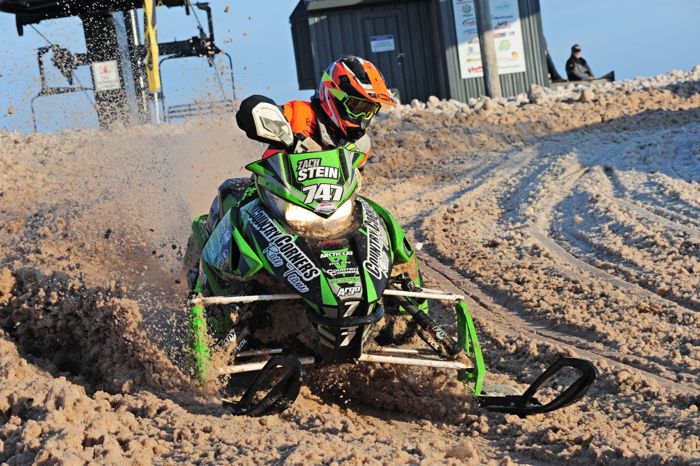 Right here you should see a photo of Ryley Bester, along with a caption describing how he won Sport #1 and Sport Lite #1, plus got a third in Sport #2, all on the new ZR 6000R SX with EFI…

…Then you should see a photo here of Ryley’s Frattalone Racing teammate Eric Downs, along with a caption explaining how he won Jr. 16-17, also on the new EFI Cat…

…and then there should be a photo here of Taven Woodie with some words about her win in Jr. Girls 9-13…

…But I failed miserably at getting photos of these Team Arctic racers, and for that I’m sorry to them, their families and teams. 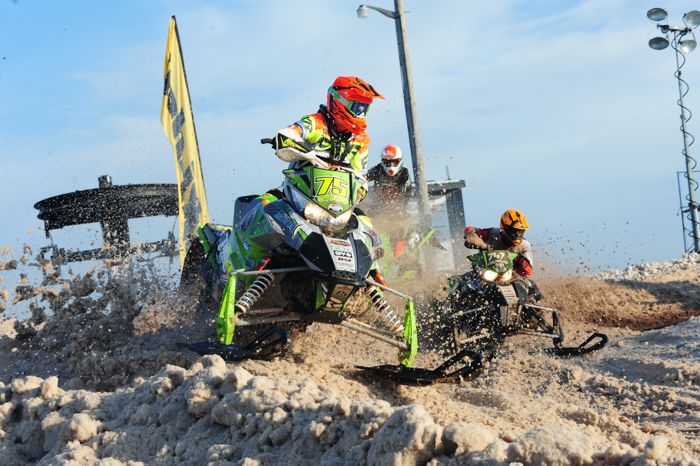 I shot a pile of pix of the Pro Lite Cat riders. Here’s Martin Moland, out of Alta, Norway, and also on the Frattalone team. Martin made it to the LCQ, but didn’t get into the final this year (he got fourth here last year, followed by a win in Fargo). 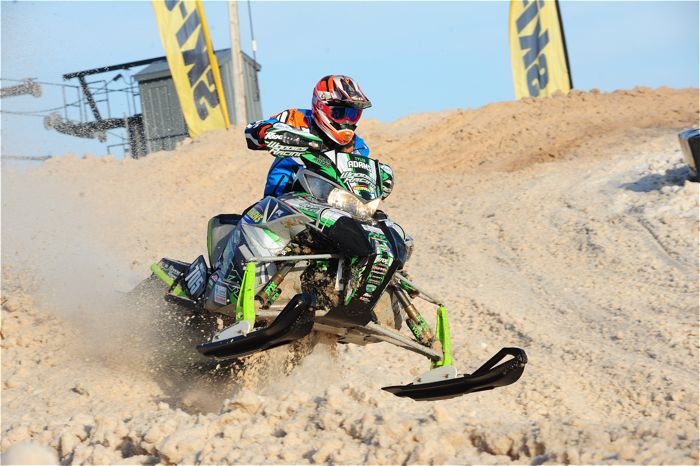 Tyler Adams looked great in Pro Lite while racing for his new team, Woodies. Fifteenth in the final. 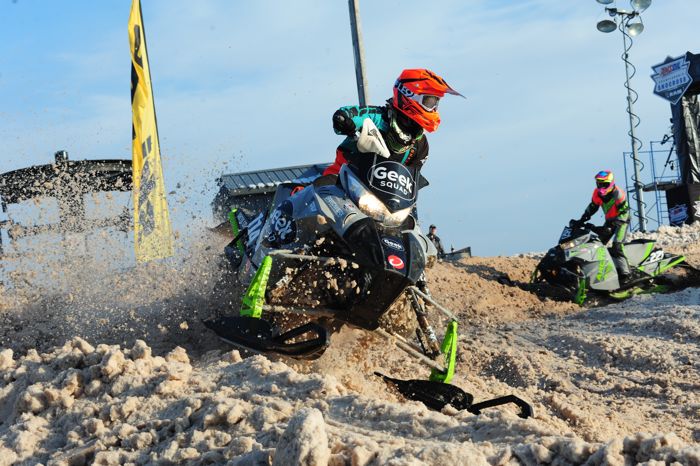 Alex Berglund came from Bollnas, Sweden, to race Duluth. He finished 14th in Pro Lite, which is awesome! 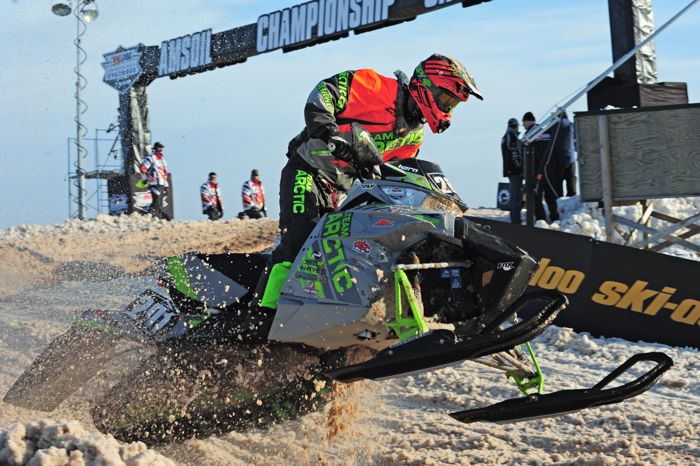 After sitting out much of last season with injury, Travis Kern returned to competition with a solid weekend at Duluth, winning a heat and taking sixth in the final. 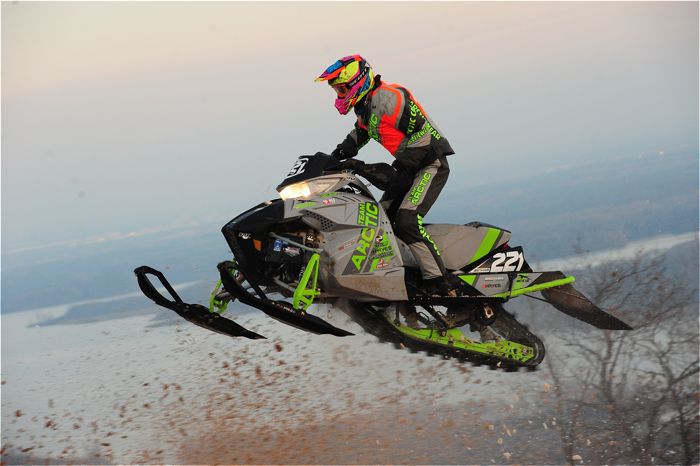 Dan Benham also showed his potential at Duluth, including a heat win. A crummy start in the final would prove too tough to overcome in what was some of the worst roost conditions possible in snocross (heavy, wet snow that also consisted of about 20% dirt), making passing extremely difficult for all but a few racers. 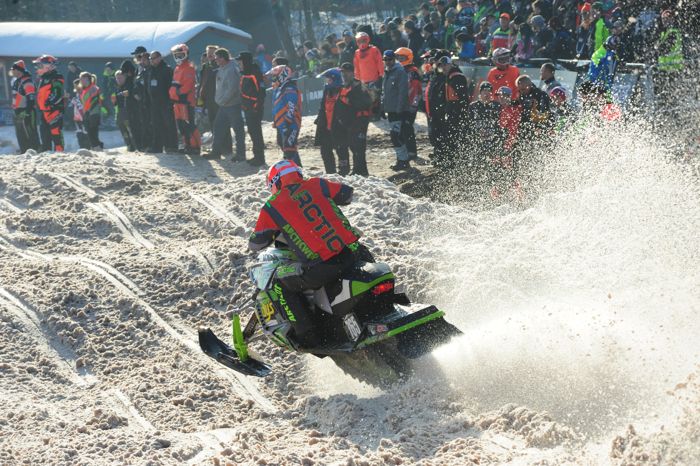 Defending ISOC Pro Lite champion Montana Jess looked extremely fast throughout the weekend, including a heat win. A tough second heat meant he had to get into the final via the LCQ, which meant a back row start. He finished 11th. 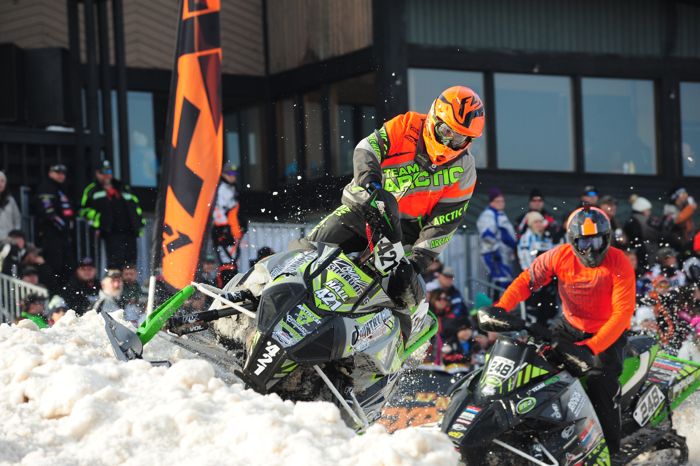 Dylan Hall (L) and Brett Nastala are aiming to make their mark in the Pro Open class this year. 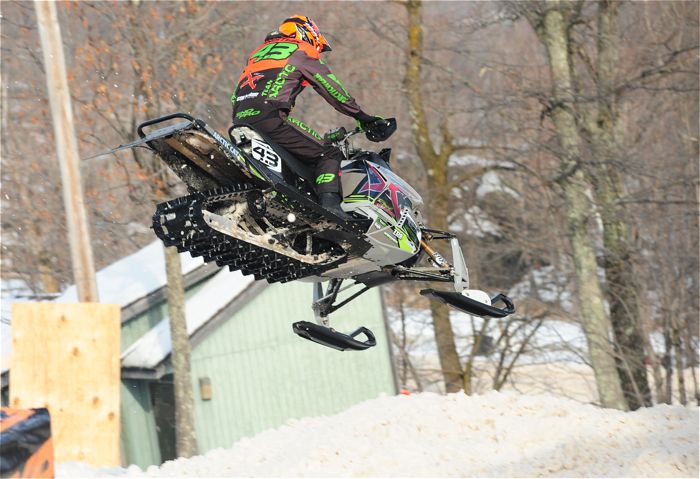 After sitting out a big chunk of last season due to injury, Logan Christian is back and looking as strong as ever. He chased down and passed Ross Martin to win one heat race. He muffed the start in the final (by running the engine RPM too high and likely causing the power valve to open), but was one of the few riders who actually passed more than one person by moving from 14th to 8th. 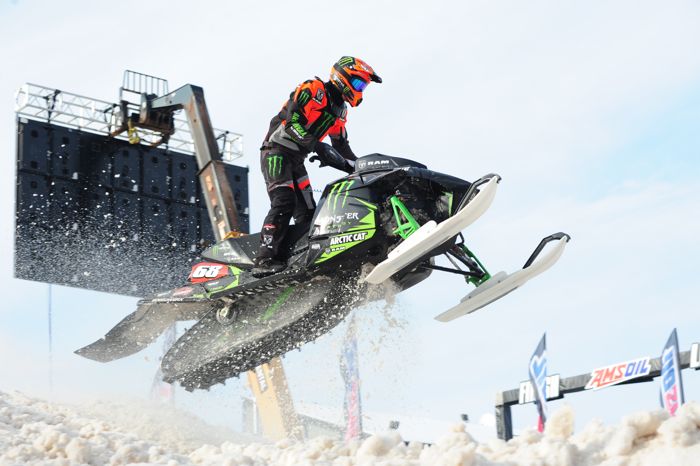 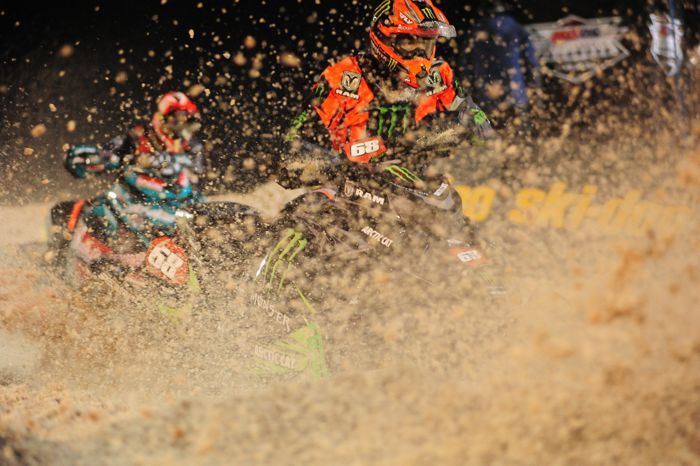 I’ve watched Tucker race at Duluth since back in 1972, and I’d say this year was fairly typical for him. He got a mid-pack start, quickly moved to fourth, then was setting himself up to move into his typical place at the front of the pack.

A couple coulda-shoulda moments (tipping over after putting a ski into Kyle Pallin’s sled while passing for third being the biggest one) kept him in third.

I heard a few people wonder out loud if his poor (by his standards) qualifying and only getting third were indicative of a new, not quite as dominant rider.

While anything is possible, I’m just going to smile and watch the rest of the season unfold, because I think it’ll be business as usual for #68. 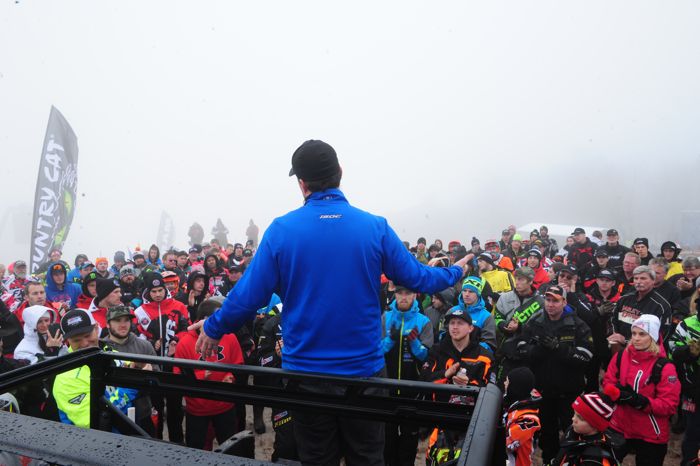 Mother nature threw an ugly curveball to the racers this past weekend, in the form of a fog so dense Sunday morning that ISOC wisely cancelled all racing that day (with plans for a make-up day later this season).

Here’s a shot of ISOC race director Carl Schubitzke explaining the situation from on top of the track. There was pretty much no visibility beyond 100 feet.

When I crunched the numbers for the weekend, Team Arctic scored 5 wins out of 16 finals, and 16 out of 48 podiums. That would be pretty equal with the other two, but it’s not the over-achieving success we’re used to. I have a feeling the numbers will be better as we get into the season, but that too is just speculation.

Thanks to all the Team Arctic racers and crews for giving such a great show.

And thanks to you for reading.