53-foot Dreams: For the past several years I’ve taken a similar photo of the Duluth pits, and every year the image looks the same. I tried counting all the 53-footers that were actual race trailers (rather than OEM promo rigs), seems like there were between 22-26.

I’m not sure what this says about the sport, but I can deduce that a lot of diesel is burned during the 8-stop ISOC National series.

Record crowds: Here’s a tip — never, ever believe the official spectator count of a race. There are simply too many political reasons for venues to fudge the number.

That said, I will absolutely go on record as saying that I can’t remember a year at Duluth (and I’ve been to all 23 of them) where the Saturday evening crowds were this big. It was nutty, actually, especially considering the B.A.C. of so many of the people.

The huge crowd combined with the tight, intimate track layout are a big part of what makes Duluth so dang awesome. There’s an electricity here that I don’t feel at any other snocross.

While my primary goal when covering races is to see what happens on the track, some of the most interesting and enjoyable action occurs off the track.

Here Team Arctic cross-country racers Wes Selby (left) and Ryan Weidemann talk shop near the pits. Wes has already put in a couple days of riding on Pine Lake, site of the first USXC race of the season on Dec. 20-21, about which Ryan was asking questions.

Probably the biggest question heading into a new season is, How are the new sleds performing relative to the competition?

Arctic Cat takes this question very seriously, which is why a cadre of engineers come to observe, talk with racers and crew, take notes and learn.

The topic at this meeting was some ideas on how to take some weight out of the race sled. A few ounces here, a pound or two there, and pretty soon the sled is five pounds lighter. It might not seem like much, but as machines get more evolved it’s details like this that make a noticeable difference.

Ebert and Kloety have had hundreds if not thousands of conversations about race sleds while standing in this trailer, each piece of shared information contributing to the overall effort of Team Arctic’s race (and consumer) sled effort.

The heavy (and hard) use of brakes can necessitate the need for additional airflow to cool the rotor, hence the ducting on Thomsen’s sled to serve that purpose.

While the mechanics tend to the race machines, the drivers tend to their body preparation that, for Logan Christian, means 10-15 minutes of a light warm up on this exercise bike.

Either that, or he’s training for the upcoming mountain bike race season?

On the other side of the trailer wall from Logan, Betsy Haldorson makes final preparations to Logan’s sled.

There’s an urgency and heightened pace at Duluth compared to most of the other events, simply because it’s the first race of the season.

Here inside the front half of Tucker Hibbert’s Monster Energy/Arctic Cat trailer, Sledhead 24/7 was interviewing Hibbert.

As you might imagine, Tucker is in great demand by media and well wishers. Considering how much is asked of him, he goes to great lengths to accommodate everyone.

However, he did deny my request to host a webinar about threshing machines from inside of his trailer.

In the back half of the trailer, Tucker’s dream team works their special kind of magic on this sled. The combined knowledge and experience of Kirk Hibbert (left), Steve Houle of Speedwerx (middle) and Garth Kaufman is so far beyond the norm, and a big part of why Tucker goes so stinking fast. 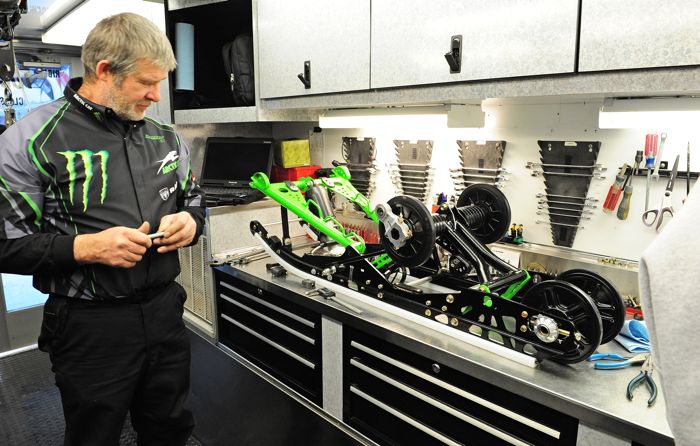 Tucker’s sled might come apart multiple times during a double-header weekend like Duluth. And each time Kirk (and Garth) will check, fine-tune and re-check every critical component. The sled is fully dried inbetween each round of heats.

It’s all like clockwork, and the sled looks so dang clean you could eat off of it.

It’s a long ways from what racing looked like at Duluth 23 years ago but, interestingly, Kirk was there (and winning).

Instead of performing meaningful crowd control, the three just stood at the top of the hill making fun of each other while talking about the upcoming cross-country race season, where Zach will try to defend his USXC Pro title aboard Hector/Corey-prepped sleds.

By the way, Zach is not 12 feet tall. Hector and Corey are 3 feet tall.

On to the actual race action…

…in which Team Arctic enjoyed a truly exceptional weekend with 8-of-16 class wins and 20 podium finishes. It was the best of any manufacturer, and it’s definitely worth bragging about.

And Trent Wittwer took the win in Amateur #2.

Colin Kernz was the one Team Arctic class winner that I did not get a photo of (sorry Colin, very lame of me). Kernz won Amateur #1.

Dan Benham didn’t win a class at Duluth, but he grabbed a second and third in the Sport finals to serve notice that he’s a race and championship contender for this season.

In what might have been the most emotionally satisfying win of the weekend; Montana Jess was victorious in Sport #2. It was his first race since nearly losing his hand in a snocross accident that occurred last season (his doctor told him that he might never hang onto a handlebar again).

It was an awesome performance by Jess and a well-deserved win!

What I saw regarding the three brands of competing snowmobiles was that they were pretty darn equal.

Yes, my underwear are green. That said, Arctic Cat took 45 percent of all the podium places. My rough math shows that there were more Polaris riders (and significantly so in the Sport class) than Cat or Ski-Doo, so the numbers favored them but the actual results don’t.

In any given class, each brand appeared capable of getting a holeshot. Same for negotiating the uphill whoop section. I saw very few broken sleds getting hauled off the track.

Unlike last year, Yamaha did not contest Duluth and are (apparently) putting their effort into cross-country, hillclimb and perhaps enduro.

Last year Travis Kern was robbed of the Sport class championship when he was steamrolled by a competitor in the last corner of the last race of the season.

Instead of returning to Sport, Kern made the jump to Pro Lite, where he scored a third place finish at Duluth! It was another stunning performance by a guy who has made big goals for himself and is doing everything he can to achieve them.

Lee Butler put Cat back on top of the ProAm Plus 30 class with a thoroughly dominating performance.

Factory Team Arctic’s Cody Thomsen did not have the kind of performance at Duluth that he expected, finishing 8th in Pro Open #1 and failing to qualify for #2. He showed flashes of brilliance throughout the weekend.

Logan Christian was on a tear during Sunday’s round of Pro Open racing, winning his heats and running third (and gaining) in the final until he accidentally pulled his tether. He recovered to finish 7th. Combined with the 4th place in Saturday’s final, Logan is off to his best season start as a Pro.

If there were questions about whether Tucker Hibbert would pick up where he left off last season, he answered pretty emphatically by crushing all of the heats and both finals at Duluth.

There were 10 laps of drama during Saturday’s Pro Open final, when Tucker was working his way up from a crummy start. But with lap times that were one second (or more) quicker than anyone else, it was apparent that, barring mishap, Hibbert would find his way to the front and take the win. Which he did, and then it was game-over.

High fives after every heat race.

Tucker notched his 96th and 97th career Pro wins at Duluth, further distancing himself as the all-time winningiest snocross racer.

While he was being interviewed for television, I heard someone in the crowd yell “Undefeated for the whole season!”

That’s such a huge task that involves far more than just Tucker’s immense skill and talent. It involves luck as well as bad luck.

In fact, had Spicolli not taken him out last year, Tucker would likely already have his undefeated season.

Could he do it this year? Of course, but it’s WAY too early to be talking about that.