End of the Year Randomness

It’s almost the end of 2011, and I have some random photos that I’d like to share. (There’s even a very brief quiz at the end.)

The first is this wicked photo of Eric Rouland taken last June in Cooke City, Montana, when the temp was a balmy 70 degrees and he was testing pre-production 2012 Arctic Cats. Eric is a service technician in the Arctic Cat Call Center. Cool!

This guy made a stop at our house this year, but I’m not sure if he was riding the ol’ Pantera or something with wheels.

THE BIG NEWS about Arctic Cat buying back the shares from Suzuki got me thinking about possible new engine options for Arctic Cat. Lots of love for the Hirths, JLOs and Kohlers amongst the vintage crowd…

Speaking of vintage, imagine it’s 1974 and you’re strolling through the Minneapolis-St. Paul airport, and you happen upon this Arctic Cat display. Look at the, uh, barrier. Simpler times.

Another interesting image of the Boss Cat II, this one sent in by Greg Bondy (thanks Greg!). It was taken by his dad, Jim, at Grand Blanc Lawn & Garden in Grand Blanc, Michigan, an Arctic Cat dealer at the time. Greg didn’t know why the Boss Cat was there, loaded on an open trailer and being towed by this beaut, so perhaps someone here does?

As long as I’m stuck in the early 1970s… I recently came across an Arctic Cat ad I’d never seen before. It’s for a…(drumroll please)… dash. As in instrumentation. For the 1973 Panther and Cheetah. Man, the marketing department had money to burn back then.

“Sorry Bob, but I was just sniffing to see if you had some good ol’ Black Magic.”

Can somebody give me a good explanation of what’s happening here with Kirk Hibbert (left, in case you didn’t know)? Seriously, a GOOD explanation.

And the big trivia question for the day: Tell me who this is (easy), the year (not too tough), where it was taken (more challenging) and why he’s so happy despite his broken rear idler?

Some sort of prize will be awarded to the winner. 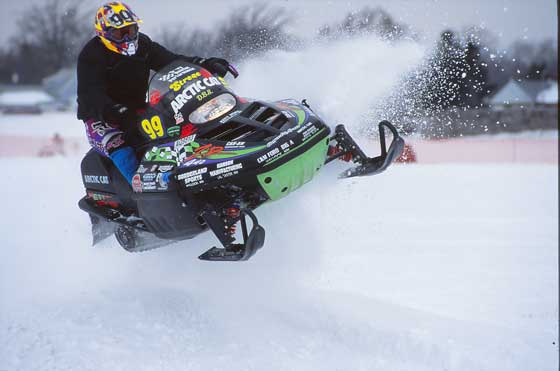 BONUS PHOTO of Jesse above, goosing it bigtime, at the same race. It’s a dead give-away!

That’s it for now, thanks for reading.