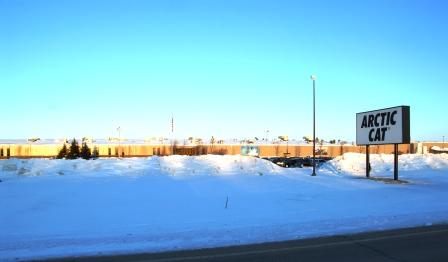 I made a quick trip to Arctic Cat in Thief River Falls last week. The trip started somberly, when I attended the wake service for Pat Mach’s funeral in Warsaw, ND, just an hour from TRF. Lots of hand-shakes, hugs and tears, but also strength and faith.

Wednesday morning in Thief, the temp was a chilly -15 F, with the snow squeaky/crunchy underfoot, and boogers freezinig when I breathed in too fast with my nose. Love that kind of winter! 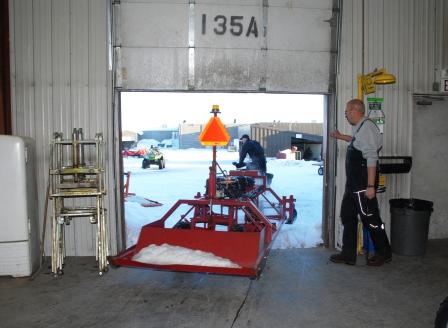 One of my first stops inside the plant was in the Field Test area, where two 2012 prototypes were being prepared for a test run. 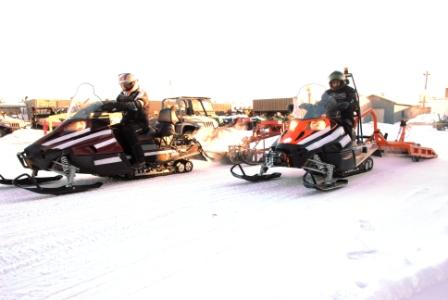 Yep, you’re looking at a new-for-2012 Bearcat Groomer Special (right). Aimed at the needs of clubs/organizations who desire a smaller grooming set-up, such as for feeder trails, parks, XC ski facilities and such.

It matches the Bearcat Z1 XT platform with a “fifth-wheel-type” mount, a rear light with floodlight/beacon, and auxiliary radiator located under the seat and handlebar-mounted switches that operate the groomer (the later of which will also be an accessory item). It also comes with a standard front-mounted winch. 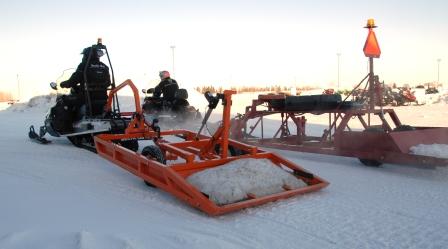 It and the other Bearcat were going out for an all-day grooming test session. No trips to the Shooting Star Casino on this day.

Maybe not the most exciting of the 2012 models, but it’s a smart, important addition to Arctic Cat line for 2012. 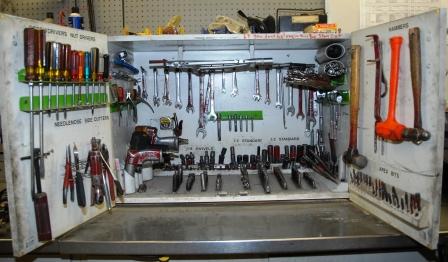 Check out this tool box. Depending upon the season, there are roughly 6-10 snowmobile field test riders, whose job it is to durability-test current and prototype snowmobiles. It’s a job that’s always intrigued me. Riding 180-200 miles/day sounds awesome, although I’m certain there are days where they’d like to be anywhere other than on the saddle of a sled.

Anyway, each of these guys has their own tool chest, for working on and adjusting “their” sleds. 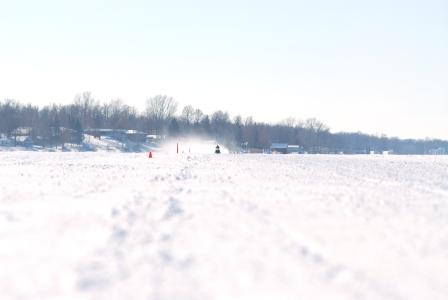 In the middle portion of the day I joined some engineers on a nearby lake, where they were testing some sleds, focussing on drivetrain and fuel mapping. 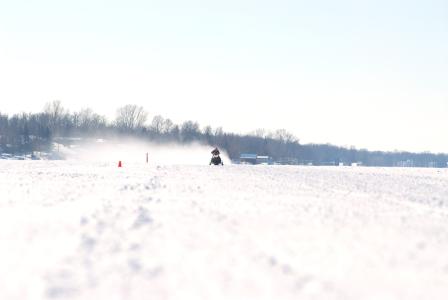 These days, testing involves a combination of seat-of-the-pants evaluation AND high-tech diagnostic equipment. 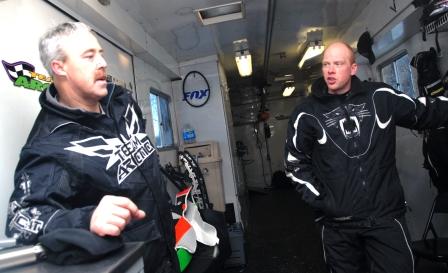 Thompson is the son of legendary Team Arctic racer Davey Thompson, and has been an Arctic Cat engineer for as long as I can remember. He heads the drivetrain and plastic groups within Engineering.

Edwards works in the engine group, helping to develop and calibrate engines. I’ve written several press releases highlighting Edwards’s grass drag racing accomplishments, but this was the first time I met him in-person. Great guy. And it sounds like he’s going to add another sled to his drag racing program this summer, to complement his F7 Firecat rocket. Hmmm….

I’m always grateful for every moment I spend with Arctic Cat engineers. They’re so smart, engaged and good at what they do, that I’m always impressed. I ask a million questions, because their jobs and thought processes are so interesting, and they’re always great about answering, even though I’m sure they sometimes tire of it. Thanks guys. 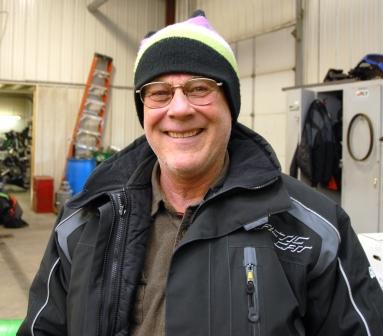 Back inside the engineering shop at Arctic Cat, I got to share some stories with the legend, Larry Coltom. One of the most genuine, nice guys I’ve had the pleasure to know, Coltom is also one of the most accomplished engineers in the entire sport. His specialty is the seat-of-the-pants engineering, at which there maybe nobody better.

Coltom is undoubtedly most famous for his oval racing exploits in the 1970s, but I’d argue that his greatest accomplishments are the snowmobiles he’s helped engineer.

On this day Coltom was proudly showing me his vintage Arctic Cat stocking hat. 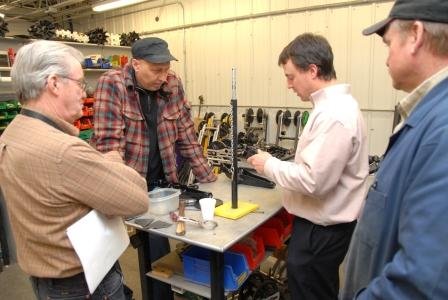 There’s some serious brainpower shown in this photo. From l-to-r: Roger Skime, Ron Bergman, Brian Dick and Jeff Olson, the latter three of which work on the suspensions and chassis.

From all that I witness of these and other people at Arctic Cat, they work on the principle of face-to-face communication rather than narrow silos conversing via telephone/email. Conversations happen constantly, whether it’s in the shop, at desks or in the field. I’m always impressed by their level-headedness, and their ability to consider new ideas.

Brian was dressed-up this day because he, Roger and a whole bunch of people from Arctic Cat had attended Pat Mach’s funeral a few hours earlier. Both Roger and Brian were in a reflective, somber mood after returning from the service, having lost a good friend. 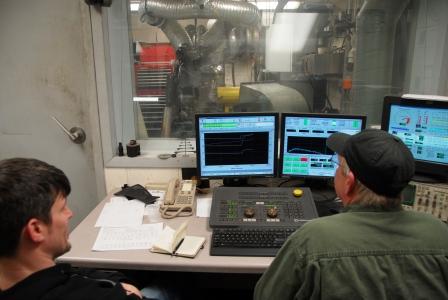 Elsewhere within the hallowed walls of Arctic Cat Engineering, Ryan Hayes (left) and Mike McArdle were running a dyno test of the 800 H.O. engine, focussing mainly on emissions.

Lot’s of stuff happening with engine development at Arctic Cat, including new dyno cells and a new air-controller system that I’m going to do a story about in the future. This is Mike’s dyno lab, and he was joking around about having to manually pull-start the engine, while Ryan simply has to press a button when using his dyno.

I shot this photo at 5:20 pm, and these two were settling in to observe a 30-minute dyno run.

Before I left town, I stopped by Roger Skime’s office, where he and Joey Hallstrom were looking at a proofing-copy of the 2012 Arctic Cat brochure.

Roger’s walls are filled with racing photos, which is little surprise given his unwavering passion for competition. It’s cool: there are photos of Charlie Lofton, Tucker Hibbert, Cadarette Racing, Blair Morgan and dozens more, and Roger can tell you something about every one of them. Such photos reflect the passion and history of Team Arctic racers, which makes Roger proud beyond words.

But this moment, perhaps exhausted from thinking about Pat Mach’s passing, Roger wanted to talk about the brochure, and all the exciting things that are happening right now and in the future at Arctic Cat.

There is nobody more fired-up about snowmobiles than Roger Skime. There are some who get AS fired-up, but never more. And these days there’s a lot to get fired-up about.

In less than a month, Arctic Cat is going to unveil its 2012 line of snowmobiles, which I know will fire-up Cat fans everywhere. And the company (all us riders) are soon going to begin celebrating 50 years of the brand!

The people here like Roger and Joey see what the future holds (and they like what they see). Me too.