Happy Birthday C.J. Ramstad! (Here’s one of your great columns.)

The following column by C.J. Ramstad appeared in the Dec. 1982 issue of Snowmobile Magazine.

The northbound freeway is wet with drizzle and my radial snow tires are humming softly against the concrete as I head northward on my first run with trailer in tow. It’s still too soon to be thinking about trail rides and snowdrifts, but it won’t be too many days before my friends across the divide will be phoning me with the news of rideable snow.

The auto dealerships and fast food places that punctuate the edge of the city fall away in the rear-view mirror as I reach down, adjust the tilt and rake of my seat and settle in for what will be a pull of several hours. I release the unlock lever on the tilt wheel and kick the wheel up out of the way of my knees. A check of the dash shows I’ve got fuel, pressure and proper operating temperature. I see there are a couple of MPH left before I’m likely to draw the attention of any lurking smokies, so I dial up the cruise control a tad.

As I settle back in the bucket and adjust the stereo balance, I run over the detail in my mind. New snowies on the back, new all-weathers on the front. Fresh dyno tune-up on the 440 CID Mopar V-8. Fresh winter blades on the wipers. New antifreeze. Tucked away in a corner of the trunk, my winter survival pack is inspected and ready. This year, a new and improved siphon for getting sled fuel when the only station in town doesn’t open on Sundays and one of those trick Canadian “snatch cords” for rescuing cars from sudden encounters with snow-filled ditches have been added to the space blanket, snowsuit coveralls, candy bars, candles and playing cards.

Ah, I think to myself, the old F-37 is still gung ho for getting a quick 20,000 on the odometer in the next 90 days, despite the rusty door bottoms and pock-marked chrome that five years of Minnesota’s winters have left on its once-gleaming exterior. Some auto company president had recently said in the press that the V-8 was passé. The F-37 doesn’t know this, but if a car could understand, this one would turn 200,000 trouble-free just to thumb its nose at such blasphemy.

The city rock ‘n roll begins to fade off the radio and I notice the rain outside the glass is making a distinctly louder sound. The forecast when I was loading up called for colder temperatures and icy roads. This was the beginning of it. Sleet.

It’s times like this that the 55 MPH speed limit on our superhighways makes sense. On a Minnesota freeway in a sleet storm very late at night, the double nickels, for once, feel appropriate.

Now I’m about 100 miles north of the Twin Cities. I make a rest area stop, check my rig and notice the air is decidedly colder. The sleet is drier, too, like clear hail. The chunks are small, but they’re coming down in thick, unrelenting sheets. There’s a thin coating of ice on my machines and gas cans. A long, 45-degree icicle hangs off both front clearance lights as evidence of the sky’s power to deliver the moisture until morning. What, I wonder, will the big lake do with this dropping mercury and moisture-laden upper air? In fifty miles, I will know.

It is, as the saw goes, a night not fit fer man ner beast. Still, this is northern Minnesot and the freeway, if anything, is busier than usual for 2 a.m. on a Saturday morning. The road has gotten icy now and my speed is down to 40 MPH. One false move, I warn myself, and the F-37 goes ditchside. I’m not worried about a quick rescue with all these other cars on the road, but I don’t care to trade pride for slide in tonight’s epic. I inch the speed down again.

I’m warm and comfortable in the cockpit, but the headlights and reflections off the icy road have caught up to my tired eyes. I spot a restaurant and decide to take a break. I throw my sledder jacket over my shoulders and go inside.

After I adjust to the candlepower of the truckstop, I strike up a conversation with two other coffee drinkers who, I soon learn, are snowmobilers too. We spend a moment determining which brand loyalty goes with which face, then the pair starts in telling me with obvious pride of the pre-season work they’ve done, “so’s we’ll be ready!” To hear them tell it, their sleds are newer than new and chomping at the bit to wail down the trail. A foot of base to cover the logs and this pair’s favorite season will begin.

I think to myself I’ve felt this way every early winter since I first road a snowmobile. I tell the two sledders I like winter for three reasons: I love snowmobiling, of course, and I take leave of my allergies when the cold weather comes. Lastly, and I know these two guys will understand, there are no mosquitoes. We all laugh at this old snowmobile joke, then I pay my check and step toward the door.

There had been a wry smile on my face since I piled into the F-37 late last night. I could feel the tug on the corners of my mouth, but I really didn’t tabulate the cause. I like to travel, it’s true, but a long motor trip alone in the middle of the night is not one of my favorite ways to get places.

When I reach the parking lot, the reason for my good mood is clear. The rain turned sleet had turned to snow. The parking lot light is an obscure fuzz ball and the F-37 is already totally blanketed in almost a half-inch of thick, wet crystals. I don my mitts, wipe the windows and crawl inside with the smell of snow in my nostrils for the first time in a new winter.

The rest of the trip will be painfully slow, I know, and the snow isn’t going to accumulate enough to provide traction for my sled. But, as I pull back out onto the road north, I begin to whistle. Here I am, a confirmed winter lover, looking at the up side of nearly four months of freezing temperatures and snowy skies. I roll the window down and, with the wipers slapping out the beat, I whistle my welcome to the thick, descending flurries.

Above is how the column appeared in the magazine.

For a 360kb pdf of the column, CLICK HERE. (Thanks, in advance, to Good Sam, who owns the copyright to the column.) 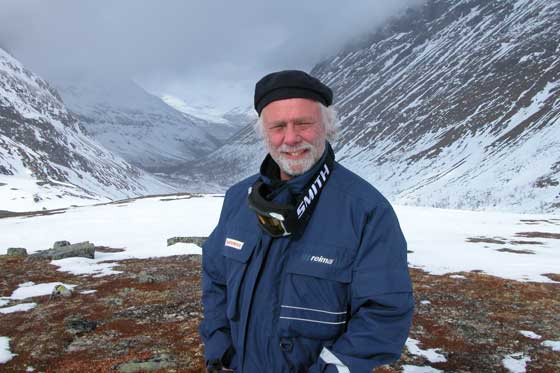